At 13, Chris Jones is making music, juggling studies, shooting music videos in the rain and playing for crowds. Pretty accomplished, compared to the rest of us... Moving on, for this instalment, Chris Jones talks to Bandwagon about These Brittle Bones, writing music, Wales, being 13, and everything in between.

Hi Chris Jones! Tell us more about yourself.

Hey there! Well, I'm a 13 year old Singer/Songwriter from the UK but have been based here in Singapore for the best part of four years. I've been going by the name of These Brittle Bones for almost a year now, as how many Chris Jones's are there in the world, but I've been playing music for as long as I can remember.

We've seen you around on the performing circuit quite a bit - Home Club, Animal Day... how has the journey been so far?

The gigs have been awesome - I've got a really supportive guitarist and bassist (Mark John Hariman and Jase Sng), who also play for Inch Chua and Charlie Lim, so it's really great to have that kind of experience backing me up live. The best crowd I've experienced so far was at the Home Club. I really enjoyed that as everyone was really supportive and it turned out to be quite an intimate set in the end.

The video for 'Anchor Bleed' is lovely, tell us how it was like filming it.

It was incredible to film it. I've been recording in Snakeweed Studios with the most legendary producer in Singapore, Leonard Soosay. After my first session, he really took to my music and we've been making it ever since. After about knowing him for a month, I was on my way to the airport this summer to fly back to the UK for my annual trip home, when I got a facebook message from him saying that he would like to come up to my hometown, Swansea, in Wales, in the third week I was home to shoot the video. He was coming with an extremely talented local director, Gerald Stahlmann, an art director, Gilani Sumida-Moseiff (who has since moved back to Hawaii), and one member of crew, Jason Elpheus Wong. I was completely taken aback with joy when Leo proposed the idea of this. I really didn't know what to say and couldn't stop thinking about it all the way on the 13-hour-flight to London.

When they came up, we didn't have a very good start to filming; we rented a car so we could get all the equipment about, but the company didn't have the one we requested, so we ended up with a 12 seater van for the four of us. We had a little crash on our first day which didn't really get us that excited for the rest of the week but looking back now I think it prepared us more. After that, we started filming properly and going round all the locations I'd come up with in the Gower. The opening shots are of my village called "The Mumbles" which really means the world to me. The song is about missing my home, and feeling apart from it being out here, and it was incredible to go back to the same place it was written about. The whole experience was really natural as we didn't really have a plan for shooting, it was very honest and pure and I don't think any of us could have predicted the feelings we had whilst taking the track that meant a lot to us to the UK, and then going to these powerful sites and seeing the emotions we withdrew. We got stuck in rain almost every day, and all the early mornings were incredibly worth it for the finished product. It was an experience I'll truly never forget.

Do you think being young heightens or hinders your progress as a musician?

It's a little bit of both actually - I think being my age brings attention to my music, but at the same time it's really hard to work alongside my education. For example, I had quite a long lecture about my university and Sixth Form pathways this morning, and I couldn't stop thinking to myself throughout that I don't want to deal with this now and just get on with my music. I do know I have to concentrate on my studies, but it's really hard to balance both music and school sometimes. I do most of my music in the evenings and on weekends, but there is a very delicate line between balancing the two. It's something I'm working on, and after being this way for the last year, I've learnt to deal with it, so it's not nearly as bad as it used to be. I also worry sometimes how much people will take me seriously as a musician because of my age - writing is and always will be the thing I feel best about. I'm so happy that i've been quite welcomed into the local scene, as I'm not from Singapore. I've had very generous opinions from locals and really do hope it continues. I'm extremely grateful.Who do you list as your influences and where do you draw inspiration from?

Oooh this is a hard one. It really varies but I listen to a lot of the same stuff. I guess a lot of my sound is influenced by British acts such as The xx, Florence + The Machine, Daughter and other dark and unique sounds like that. I listen to a lot of gloomy folk too – Laura Marling, Keaton Henson, James Vincent Mcmorrow, Bon Iver, Kyla La Grange. A lot of my writing is about missing my hometown. Although I’m incredibly lucky to have such incredible experiences in SG, I do feel homesick from time to time. I miss the people and scenery a lot of the time, which is really what a lot of my material is about. 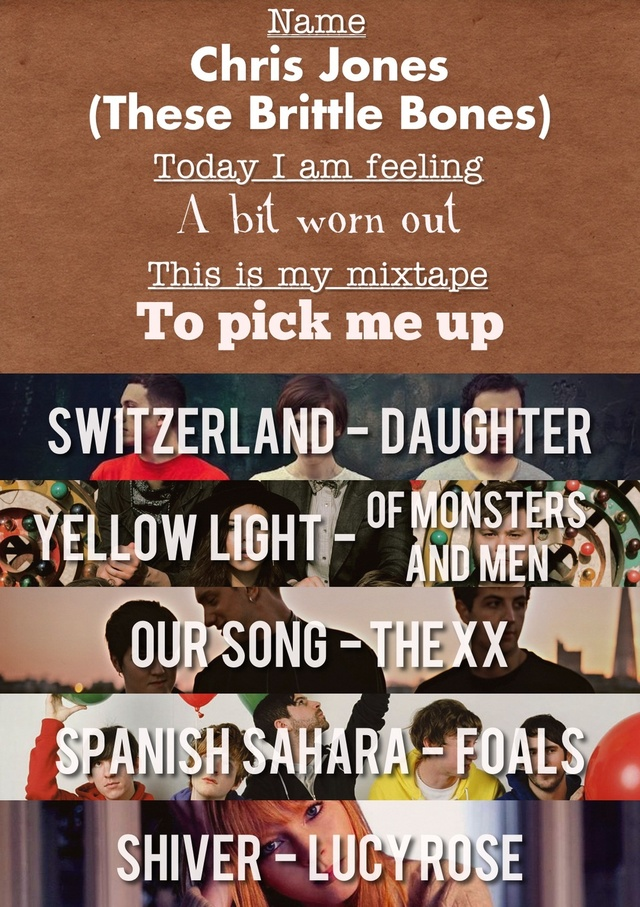 Find These Brittle Bones on: