The likes of Mozart and Bach and ‘wordless music’ may not conjure much excitement, but the introduction of classical music into the contemporary and alternative genres are garnering more interest, especially with the younger people who are more attuned to music on the radio. Somewhere on the quite hip island of Singapore, we’re housing a quartet responsible for bringing a classical twist to contemporary tunes. The Bandwagon Team speak to VOX:

Hello! We are VOX, a pop/rock band on strings, with Lester on 1st Violin, Justine on 2nd Violin, Melissa on Viola & Huiwen on Cello. We are a bunch of classically trained musicians who want to turn the classical genre on its head to create entirely new sounds and audio/visual experiences.

How/when did you get together?

We have known each other for a long, long time, growing up together, playing together in school groups and the Singapore Youth Orchestra. VOX was formed about 2.5 years back when Lester came up with the idea to form a string band that played anything but regular classical music.

Run through the journey so far...

Awesomely exciting! We have hit almost every big gig in the last 2 years, playing at major events and venues like F1 2011 & 2012, the Youth Olympic Games, Asian TV Awards, the opening of *Scape, Jewel Fest, Marina Bay Sands, Esplanade, etc. Enquiries are also flooding our mailboxes everyday, from the local as well as international scene. We have also had the good fortune of scoring interviews with magazines and radio stations, being named amongst the "next big things" to watch out for by Elle in 2010 and more recently jamming an acoustic set live on Power 98.

VOX performing U2's With Or Without You

What made you decide to do contemporary-rock-alternative?

When we first started out, everyone expected us to be yet another Vanessa Mae or Bond type of band, i.e. sex on strings. There were even some enquiries to switch Lester out for a babe!

But right from day one, we struck out to do something different and create something that we could own. Having Lester lead the group gives us a masculine rocker edge that most classical groups don't have. Mashing classical instruments with the pop/rock genre creates a raw quality infused with adrenaline-fueled energy that gives us a real high that we haven't experienced before.

Can we expect original tunes soon?

VOX is focused on the performance aspect of music making, so, there are no plans for original tunes at the moment.

But we are planning to work with a DJ on club mixes in the upcoming months.

You guys have played at huge events; which one was the biggest one so far and what was that like?

That would be at the F1 Village Stage last year. We were on a huge stage with a big projection screen at the back so it felt like a real rock concert. The crowd also grew as we performed, egging us on and fueling our energy. The crowd shouting encore at the end of our set, in unison, was probably the best reward for the year.

Definitely to continue our reach locally. Ultimately, an Asian tour in the near future.

What can we expect for the upcoming show?

We will be paying homage to our Chinese roots at the Esplanade on 2nd & 3rd Feb, rocking out to May Day, Jay Chou, Wang Lee Hom, amongst others, all arranged by our secret squirrel orchestrator Lester over the Christmas holidays. For good measure, we will also be throwing a couple of good ole Chinese New Year tunes. We will be doing 3 sets at the Esplanade Concourse 715pm - 1015pm. Come rock out with us! 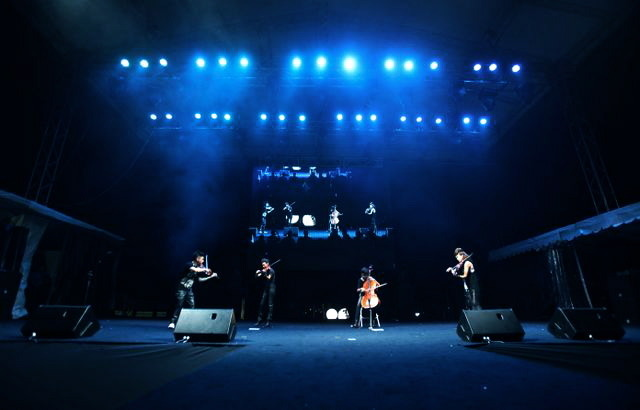 Check them out on the internet: