All good ideas start in the shower, it’s true - according to Mae Ng and Lizanne Teo. Years before the inception of Upsurge Productions, these two friends, fans of metalcore and punk music met in school and had talked about doing something someday. Somewhere along the way, there was a shower revelation, some emails were sent and then, the birth of Upsurge. In that order.

In a busy city Coffee Bean chain, the girls talk to the Bandwagon team about hard work, crying, and even Taylor Swift.

They are busy, busy people

Upsurge Productions is not the only work commitment they have. Mae and Lizanne have internships and part-time jobs left, right and centre (they agreed to meet us during a break) but still manage to organise some of Singapore’s more power-packed gigs. Nonetheless, despite the stress of planning events and juggling things, these girls are clearly passionate and enthusiastic about everything they do.

They got some help from dictionary.com …

When they had to decide on a name for the company, they went online to search for something music-related. “You always get a right feeling about some things, and when I saw the word ‘upsurge’ and how it means ‘to rise’ and I thought, this is the one,” Mae explains.

… and some of the important people in the industry

With planning sold-out shows, comes great responsibility. And also, the opportunity to meet and talk to artists and managers. Mae and Lizanne are thankful and appreciative of the help and advice they have got from the ‘big bosses’. The manager of Mayday Parade told them that Singapore had been the ‘best overseas gig they have done’. These moments have inspired Mae and Lizanne to continue to improve Upsurge Productions.

The very first event they had planned did not happen in the end! In February, when Miss May I could not make their way down to Singapore due to a snowstorm in New York, Mae and Lizanne had to reluctantly announce that the sold-out show had to be cancelled. Five days before the actual date. As painful as it was, sweet success was tangible soon enough when their next show (and technically the first real one) in July, a double-bill featuring Mayday Parade and Eyes Set To Kill also sold out at hip venue, Warehouse at *Scape. Best, Mayday Parade was one of the bands they had travelled to Australia to watch and were now rubbing shoulders with them. 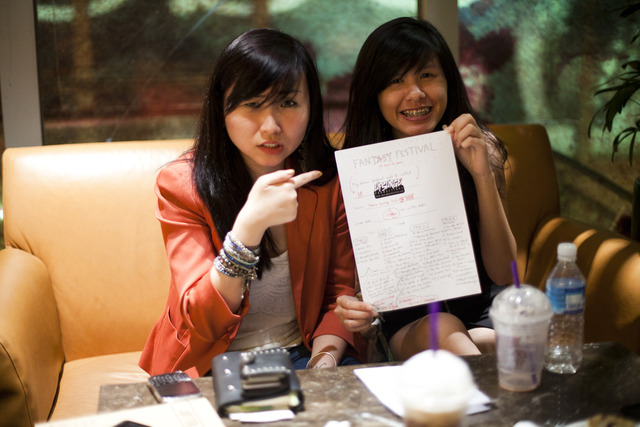 The art of going to gigs

The girls often go to gigs and festivals not only to enjoy the music but also to learn the ropes. They share with us some of the gigs they have been to, and Mae surprises us by revealing that Westlife is the first concert she has been to, “during her kiddie days” but also adds in Avenged Sevenfold. Lizanne admitted that she had not been a ‘gig person’ before meeting Mae, but Singfest would be her first. Some of the best shows they have seen include Green Day, The Used and Pierce The Veil, who they hope to work with in the future. Trivia: Mae went to watch Taylor Swift alone and it was “damn fun.”

Learn to say ‘no’

…is the best advice they have got from Mae’s boss at Tab. They explain that sometimes it is hard to say ‘no’ when bands ask for extra drinks and the sorts, leading to overspending the hospitality budget. The girls do their best to accommodate the acts that come to Singapore that they feel bad when they have to pay for their own things.

Get on it here: http://upsurgeproductions.com/ticketing.html

We also gave the girls an opportunity to plan their ‘Fantasy Festival’ and immediately they morphed into business mode, even planning the various stages and after party. We could be fooled that they were planning an actual festival! 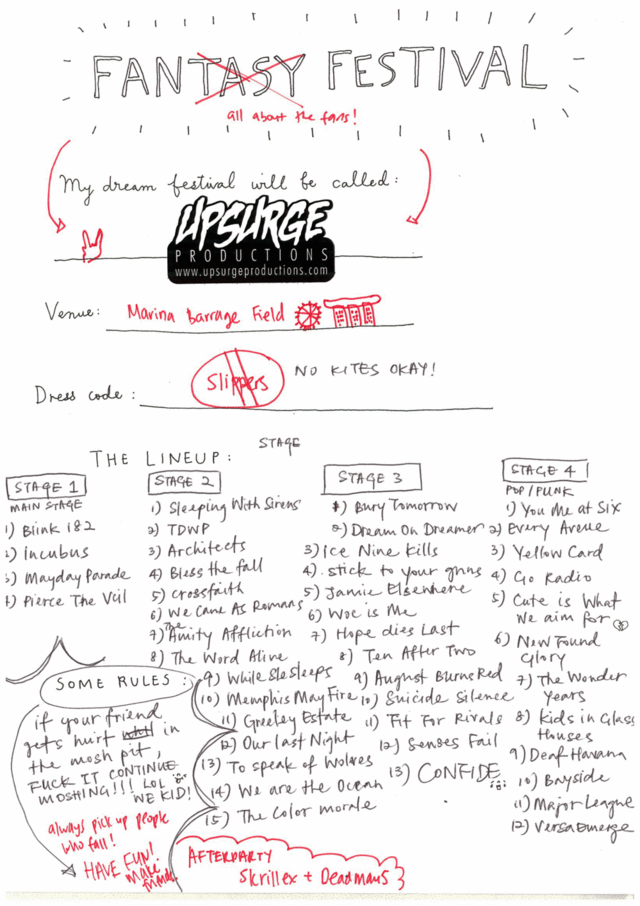