1989 is out. The long-awaited Taylor Swift album, the one that sees her abstain from her clean-cut country pop beginnings to embracing “retro” modern synth-pop that is both shimmery and life-affirming. By all accounts, it’s a hit. Since the release of her first single “Shake it Off”, she was already expected to produce a chart-topping record. Taylor Swift has the potential to topple any other female pop artist to be at the top, being the only artist expected to sell over a million copies this year. Unsurprisingly, she delivered. In the entire campaign leading up and following the album, the only surprise to come out of it was Swift distancing herself from a little music streaming program named Spotify.

Swift came out to declare that she was pulling her discography and preventing 1989 from being available on the music streaming service, citing “Music is art, and art is important and rare. Important, rare things are valuable. Valuable things should be paid for. It’s my opinion that music should not be free, and my prediction is that individual artists and their labels will someday decide what an album’s price point is. I hope they don’t underestimate themselves or undervalue their art.” This move has since been applauded and criticised. It’s not something new; Thom Yorke, a prominent supporter of forward-thinking album releases, pulled his discography and labeled Spotify “the last desperate fart of a dying corpse”. The actions of both artists, although starkly different in artistic endeavours, share similar and seemingly-altruistic messages: Spotify is bad for smaller and emerging artists.

Taylor Swift claims 'Piracy, file sharing and streaming have shrunk the numbers of paid album sales drastically, and every artist has handled this blow differently' while Thom Yorke believes 'I feel like as musicians we need to fight the Spotify thing'.

Swift could already live luxuriously with her earnings from digital and physical sales of 1989 alone, with or without streaming, while there’s no question Yorke has earned quite a comfortable sum through years of albums that have sat healthily on charts. Not to mention he sold just over a million units within six days of his new album’s release through BitTorrent, self-released without any major label interference. So you could say these artists could have no business being bothered by the rates Spotify pays them. They’ll still earn money anyway. A lot of it. No, they’re doing this because they feel it is wrong for the struggling artists who don’t have the luxury of having the backing of a major label or prominent indie label. Meanwhile, Yorke believes it could very well be the replacement of a “gatekeeper” role that other services like iTunes and music stores have been, something which hinders the Internet’s ability to connect the artists directly to their supporters.

Yorke is right. The industry is fast becoming a dying corpse. But while Yorke’s sentiments may be understandable through his complete cynicism of the way the industry has worked (or rather, still tries to work in the face of rapidly-changing technology), Swift’s case is a little different. She explains in an op-ed for the Wall Street Journal that the value of an album is “based on the amount of heart and soul an artist has bled into a body of work, and the financial value that artists (and their labels) place on their music when it goes out into the marketplace. Piracy, file sharing and streaming have shrunk the numbers of paid album sales drastically, and every artist has handled this blow differently.”

So why is Spotify “bad” for smaller artists? They cite Spotify’s payout rate, which is extensively detailed in an illustrative website meant to be the company’s top-tier defence against critics. If you were to take the rates stated on the site, artists will need about 119,047 plays to earn US$1000 from streaming. However, Spotify hit back at Taylor Swift claiming to have paid artists more than US$2 billion since they started in 2008. He also reiterates an important point: Spotify is using streaming to combat piracy. 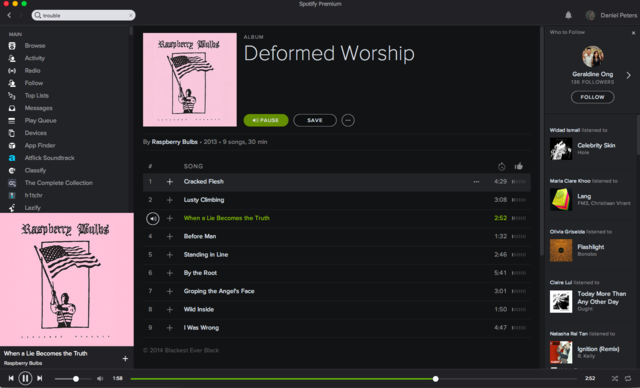 Piracy has been an issue since Napster came into play. Metallica tried to fight against it but there was no point. Soon, more peer-to-peer programs started to show up, some even more advanced than others, with BitTorrent following not long after. It has since been easy to acquire music, movies, computer games, software and even books through illegal downloading. The industry has done so much to combat it, including Copy Protection on CDs which prevented consumers from ripping the files on their PCs. iTunes has been their closest victory but they’ve always been unhappy with the decline in sales. They point their fingers to piracy being the problem so now Spotify offers a possible solution to go against the rise in music piracy.

So let’s take a look at the different sides here. You have music pirates who obtain a copy of an album, upload it to a public server for many people to download it for free. No revenue comes out of it. The artist loses out completely. Now you have Spotify, a service offering free streaming along with a paid premium model offering better streaming quality, where some of that money goes back to the artists. They don’t have the best payment model but it’s a start.

Meanwhile, Foo Fighters frontman Dave Grohl counterbalanced the growing resentment towards the service, saying “…I want people to hear our music, I don’t care if you pay $1 or f**king $20 for it, just listen to the f**king song. But I can understand how other people would object to that.” On one hand, Dave Grohl then had an upbringing in the DIY punk scene of Washington DC and started out in Seattle with some band called Nirvana so he knows what it's like being a struggling musician wanting to get your music heard. On the other hand, Dave Grohl now is a multi-millionaire rock star who performs with his band at sold-out arenas regularly so it’s possible to say that he might just be out of touch.

Either way, both statements by Grohl and Swift are unsubstantial. While Swift’s reasoning is understandable in her fit of compassion, it leaves little room for important discussion on where the music industry is heading to in the first place. It’s a struggle against technological advancements when artists should be working with it. Plus, Taylor Swift’s back catalogue is still available on Rdio so that makes her actions a little bit suspect. Meanwhile, Dave Grohl simply shrugs off the fact that artists should still earn money off their music. He tries to bring the point that you shouldn’t depend on music sales not like in the past but it comes across as reckless instead.

Where Swift and Grohl grabbed the spotlight, musician Iggy Pop and producer Steve Albini have put out thoughtful and extensive opinions which didn’t get as much attention. Iggy conducted an entire lecture on Free Music in a Captalist Society. We implore you to watch the whole thing, if not then read the transcript as he talked about how someone like him still struggled in the music industry way before piracy became rampant, and how there have always been bigger problems within the industry than piracy and free streaming. Albini spoke about the industry as well and how it has always operated for its own benefit, leaving out the hard-working bands high and dry most of the time. He points out the terrific advantages of the Internet, with streaming services and other websites like Bandcamp, and how it gives an edge to bands and fans.

This ongoing debate brings to mind a similar situation in the video game industry. Having faced setbacks with piracy themselves, Gabe Newell of gaming studio Valve tried out the idea of buying games over the Internet, setting out with his team to create Steam. Basically a gaming version of iTunes, you can buy a wide variety of new and old games, sometimes at amazing discounts. So far it has worked, with over 75 million active Steam users and a (relatively) healthier gaming industry. Piracy is still a problem but rather than trying to fight it directly, Steam was their concurrent effort of working with evolving technology. To Gabe, “We think there is a fundamental misconception about piracy. Piracy is almost always a service problem and not a pricing problem.” He also talks about their ongoing relationships with users and most importantly, publishers. "Our success comes from making sure that both customers and partners (e.g. Activision, Take 2, Ubisoft...) feel like they get a lot of value from those services, and that they can trust us not to take advantage of the relationship that we have with them.”

This conflict may just be fixed if streaming services worked even more closely with labels. Streaming services need to start paying more but more labels need to start opening themselves up to new technology and work together for a fairer deal. As both Iggy Pop and Steve Albini pointed out, there are so many flaws in the industry itself that are detrimental to the artists and songwriters. Spotify and all these services simply aren’t the problem. The songwriters are the ones on the losing end but only because of the small percentage of wealth distribution they get from their label. Shouldn’t they stand up to their labels instead?

But what can we do to give more money to these artists on the losing end? Go to their shows, buy their merch, buy their tracks off Bandcamp or iTunes, buy their vinyl, buy their CDs. Maximise your streaming habits on Spotify or Deezer or Rdio. Heck, just throw money at them because they deserve it. Let's show labels that the Internet has done more good than bad. The music industry machine has its own problems to settle out, so we’ll just have to be supportive in our own different ways. There’s an initiative to get Spotify to add a ‘Donate’ button on every artist page for us to properly throw our money at them. Services like Spotify are the future, no doubt, and by adding this feature, would they still be the problem that the industry makes them out to be?