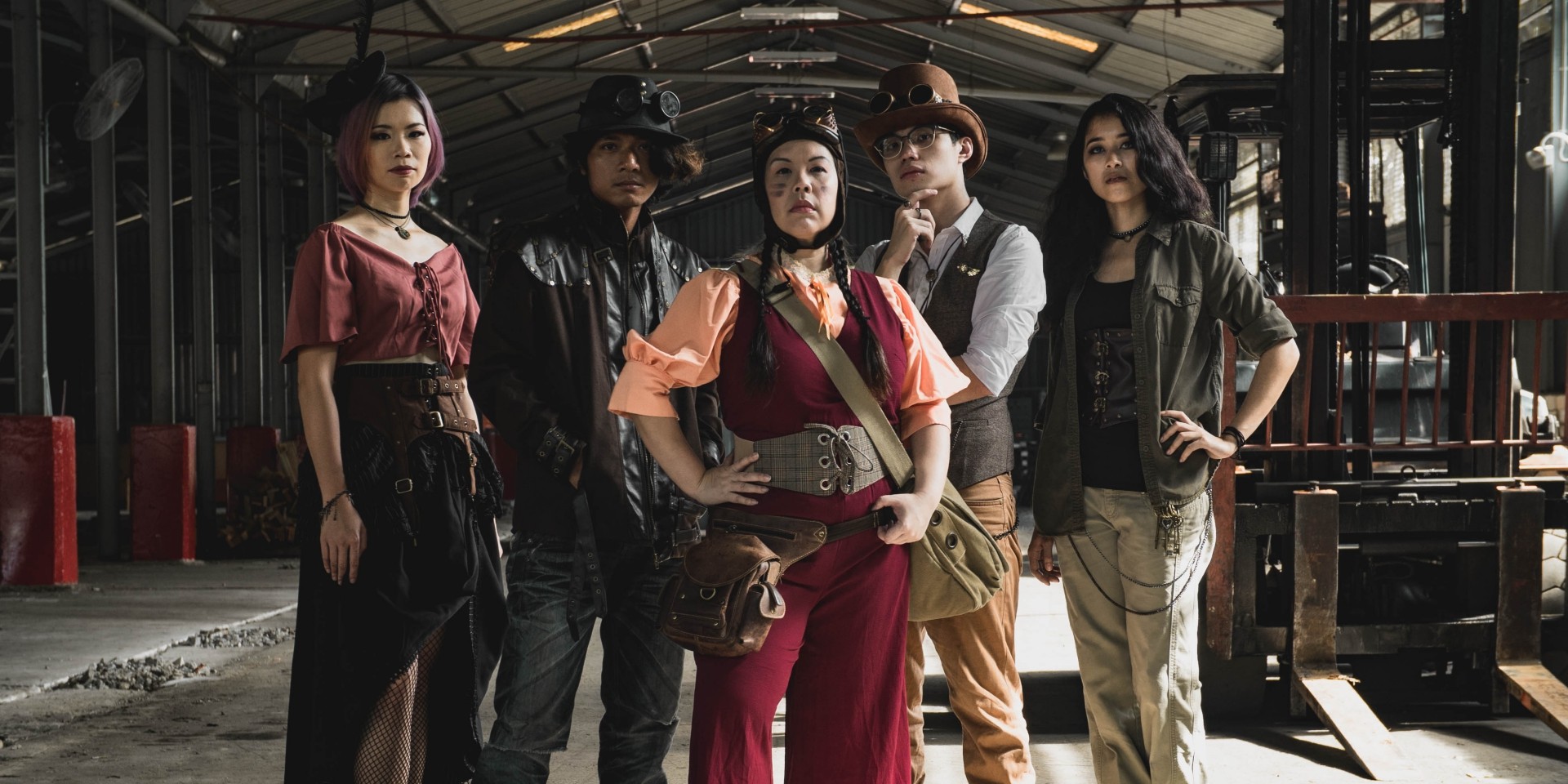 Rock music is an umbrella term that is synonymous with the epic. But Singaporean quintet Sangriento is taking it even further and bigger. Tomorrow, the band will celebrate the launch of its album Blood Pact, which carries a tale of a of vast inter-planetary conflict set in a dystopian world, as well as comic book that chronicles it all.

In a recent interview with us, frontwoman Candice and guitarist Han tell us how it came to be.

Congratulations on the impending release of Blood Pact. What do people need to know about the record?

Han: The record is an 11-track album based on a comic book drawn by our drummer. Each song corresponds with a chapter from the comic. Basically, it's steampunk-ish and post-apocalyptic themed.

Candice: Han's being a little bit modest because he didn't mention that he was the originator of the story. He wrote the original story and the first draft of the script. Then, Christal took that script and created the comic book.

What made you want to go with an accompanying concept to the album?

Han: Previously, the whole doing-songs-based-off-a-story concept was in my head. Two years back, we went to Japan and did a small tour. We got a lot of feedback saying that most of our songs tell a story.

Candice, what's it like singing from the point of view of different characters? It seems like a tall order for any lead singer.

Candice: Not really, for me. Because I've been a professional actor for nearly 20 years, playing multiple characters comes naturally to me. It's still an interesting challenge, for sure.

How do you get into the mind space of each of the characters?

Candice: That is the result of us playing these songs for almost two years. When I first got into it, I came from looking at the songs individually and how I would interpret those. Later on, after reading the whole story, I had to mould that a little more to the characters. But it wasn't too difficult to find that.

Even though it's happening in a sci-fi world, would you say the narrative of the album has any bearing on what's happening right now?

Han: The closest thing would be the issue of pollution and environmental issues. It's not the main focus but it's part of the story. Basically, there's a character in the story, who is in support of the Earth and against pollution.

Candice: But, he's not exactly going about it the right way. I think, ultimately, his intentions started out good but, as with all extremists, he takes it too far and was corrupted by that.

What are some of the emotional themes in the record that you think people should know about?

Candice: As with any good rock opera, there's always the "light versus dark" or "good versus evil". But, I find this story particularly interesting because it's not all black and white. Instead of just good versus evil, there's also a third faction that is kind of in-between. So, there's a triangular conflict going on. One of the main original factions – without giving away too much – has a flip in its philosophy that creates further conflict with the extremist faction, which then affects the third faction in negative ways.

The third faction are kids so they haven't really found themselves, yet, they are thrusted into this very global and adult-concerning conflict. They do have these natural powers that all the adults around them want to tap into so they're being exploited in that way. There are certain bad decisions that are made on their part and certain temptations that are extended towards them. So, there's a lot of internal conflict as well.

Han: It would definitely be something different. The previous stuff was more, I guess, standard rock-ish but we're going in a different direction in terms of lyrics and sound. Lyrically, it's not as direct as the previous songs that we have done.

Candice: I wasn't involved in the previous lineup so I'm not so familiar with the old music. But from what I’ve heard, exactly like what Han said, it was straight-up rock back then. Now, there's a whole lot more storytelling. A lot more imagery that we've brought into the lyrics. It's  very much more epic especially on the orchestral side.

One of the things that sets you apart is your sense of theatricality. Why is that important to you?

Candice: For me, and I believe we're on the same page as a band, is that we are, first and foremost, storytellers. Yes, there's a lot more story than lyrics themselves but what I find, quite often, is that you don't quite get it until you look at it on a page. Why not bring the story across in your performance? Why not, instead of just singing the songs, act them? I'm approaching this project as an actor-singer and not just a singer. I do believe that, for a lot of singers, they are in touch with the emotions within their songs. But I think that because this is fictional, it needs to be heightened a bit.

Han: Ideally, for this album at least, the best case scenario would be having the stories back there as we play the songs so that people can get fully immersed. At the end of the day, the songs are not really the focus, it's the stories. The next best thing that we can do is to be theatrical.