We've waited long. It's been three years since their majestic two-night live debut in Singapore — plus, two years since we caught them hammering it up in Thailand — but now Japanese math-rock band toe will be making an official return to our shores.

The Japanese quartet are set to perform on November 30, shifting from the open-ended confines of Esplanade Theatre Studio to eminent club Zouk, where post-rock band This Will Destroy You previously played back in June. toe will be coming back to Singapore thanks to Symmetry Entertainment.

While a household name in the Asian underground rock scene, the band recently broke ground in American and European territories thanks to their latest album, Hear You, which was released and distributed by prominent US independent label Topshelf Records.

Tickets are available through Peatix, with standard tickets priced at SG$68 for advance sales. If their previous two-night showcase was any indicator, we suggest getting your passes asap. This show has a good chance of selling out.

Stream their newest album Hear You in its entirety below:

UPDATE: Due to unprecedented demand, which resulted in sold out tickets for November 30, Symmetry Entertainment has added a second date to toe's visit to Singapore. The band will now be playing at Zouk Singapore on November 29.

That's not all. It looks like toe will be getting some Singaporean love as well, with ANECHOIS opening for them on Nov 29, and Sphaeras following suite on Nov 30. Doors will now open at 7.30pm.

Tickets for Nov 29 on sale now. Check out the updated posted below for the full rundown of toe's second visit to Singapore. 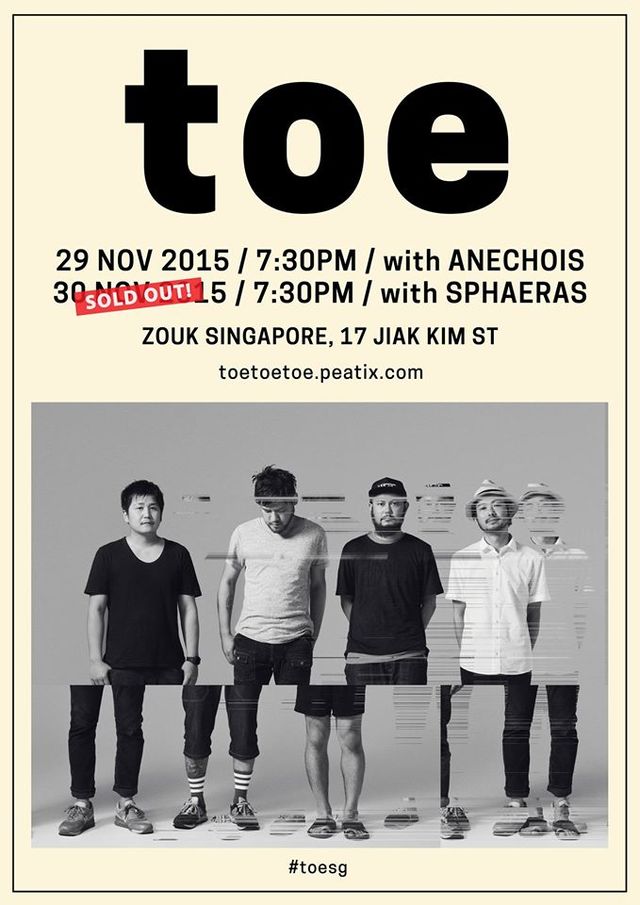