Festivals have the tough job of establishing a consistent lineup. It will speak volumes about the kind of festival they are, the environment they want to set, what crowd they want to attract. It’s tough. There are so many factors in play — from the appeal to the viability, which all falls under a single budget. Coachella made the controversial (and frankly, a little bit odd) decision to put hard rockers AC/DC and hip-hop superstar Drake as equal headliners. Reading & Leeds are under fire for adding an appalling total of eight acts that feature female members, making the whole three days an unwavering sausage fest.

For Sing Jazz, they had to step up this year. Jazz doesn’t exactly have the perfect grasp on a new generation of music lovers, although it lives on healthily through young, exciting acts. The thing with jazz, like we’ve highlighted before, it has been constantly redefined and has had its elements blend into other styles. To some people, Kenny G is jazz. Miles Davis is jazz. Badbadnotgood is jazz. The meaning of ‘jazz music’ has barely been singular, not since Miles Davis made his defining statement in his groundbreaking 1956 record Kind of Blue.

This song, along with the whole of Kind of Blue, is essential listening if you haven't heard it yet.

So it isn’t easy to contain ‘jazz’ into a constrained definition, which leads us to Sing Jazz’s unveiling of their headliner: Jessie J. Yes, the Jessie J who dominated the charts with that song you hear on the radio all the time — or the equally-satisfying shred, if you know your internet memes enough. A pop singer headlining a jazz festival? Absurd! Crazy! She’s not jazz! The cries of many a jazz aficionado and pop-head. It’s understandable. What does Jessie J, a pop superstar who hangs out with Ariana Grande and Nikki Minaj, have in common with Bobby McFerrin or Chaka Khan? Well, as it turns out, more than you think.

FIND OUT MORE ABOUT SING JAZZ AND GET TICKETS HERE

Jessie J first broke into the mainstream consciousness when her fiery anthem ‘Do It Like a Dude’ entered the charts. Before that, she was just Jessica Cornish — pop songwriter extraordinaire, at the disposal of artists like Miley Cyrus and Chris Brown. But now, she’s one of pop’s most beloved artists, sitting comfortably in Billboard charts with her recent hit ‘Bang Bang’. Jessie J has managed to make a successful career out of making pop music, with an instrument that’s stunningly powerful — her voice. 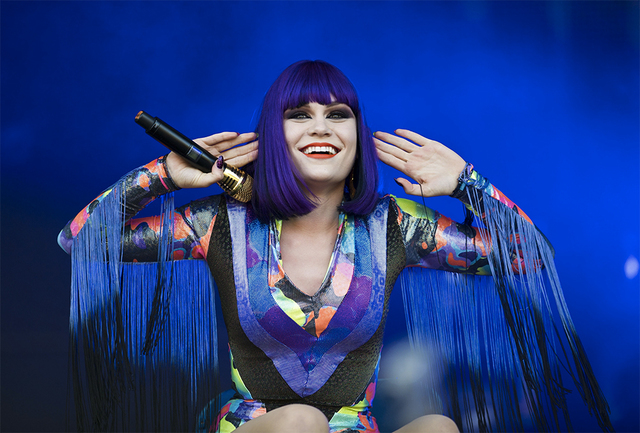 Jessie J, pictured, presumably listening to her own voice in playback because it's that good.

Sweet Talker was Jessie J’s third and latest album, released on October 10 last year. While she fared unsurprisingly well in sales, critics were overall mixed. Criticisms were drawn towards the songwriting and production but one thing most of them could agree on: she’s got one heck of a voice. So what does that have to do with her headlining Sing Jazz? Take a look at some of the other vocalists set to perform. None of these other vocalists on the lineup are strictly ‘jazz’ per se. Chaka Khan is revered as a vocal powerhouse while still achieving pop hits in her lifetime. Bobby McFerrin has amazing vocal improvisation skills even though he’s best known for his feel-good tune ‘Don’t Worry Be Happy’.

What matters is that they’ve always had jazz in their music, whether it’s evident or not. For a pop star like Jessie J, she’s remarkably soulful. Her voice rings with power and absolute control — something most current pop stars don’t usually possess. She’s also a huge proponent in infusing soul and R&B into her pop compositions. Her slot at Sing Jazz doesn’t just signify the festival’s aim to be friendlier towards a younger crowd, it’s a validation that a young star like her — who exists outside of the jazz circle — has talent, the kind of talent they recognize is in line with what they believe jazz to stand for.

So you can either continue to be baffled by Sing Jazz’s appreciation of mainstream music or you can enjoy an artist like Jessie J for her merits. A festival should be a celebration in music and sometimes genres can even be redundant. At the end of the day, Jessie J's got a fantastic voice and she loves improvising — the mark of an excellent performer. What we also know is, you should go to Sing Jazz and just expect a fun show.

This article is part of a series promoting the Singapore International Jazz Festival, happening on 5 - 8 March 2015.