Scottish indie rockers Jesus and Mary Chain has come a pretty long way to achieve their namesake: the Second Coming. With five albums under their belt following 17 years of some hard rocking, the Reid brothers are back off a hiatus of nine years to wrap up some unfinished business.

Pardon the history lesson but 1983 was a blessed year for music lovers, amidst all the electronica pop (Duran Duran and New Order to name a few), Jesus and Mary Chain stood out like a glow stick in a sea of darkness. With their new creation of gnarly anti-social tunes, the music was a breakthrough.

However, their early years were plagued with drug use and police arrests, blood and violence from their fans at shows were something they were all in line with. Things only started picking up with the success of ‘Upside Down’ and it was all uphill for them from then on… till their eventual breakup in 99’ of course.

Since 2007, they have been occupying themselves with some much-demanded touring (playing with Scarlett Johansson on backup at Coachella and questionable venues worldwide), and even putting their head out on the “Heroes” soundtrack with ‘All Things Shall Pass’, their first new song since 1998’s Munki.

If you’re still unfamiliar with the Mary Chains, you ought to check out “Just like Honey”, their single off their revolutionary debut album, Psychocandy. Psychocandy; their best album to date in my opinion highlights Jim Reid’s grouchy Lou Reed-y vocals droned behind layers of crunchy distortion and feedback just perfectly. Listening to it on a lone night, you could almost feel all that amphetamines and frustrated emotions creeping up leaving you misty-eyed.

And now the good news, on the 26th of June, Jesus and Mary Chain plays the Esplanade Concert Hall courtesy of the guys at 4imaginaryboys. It will not only be their first appearance in Singapore but it will also be their first and only pit stop in all of South-east Asia. It only makes sense to start picking out your seats right this instance; I wouldn’t count on a third coming the next time round. 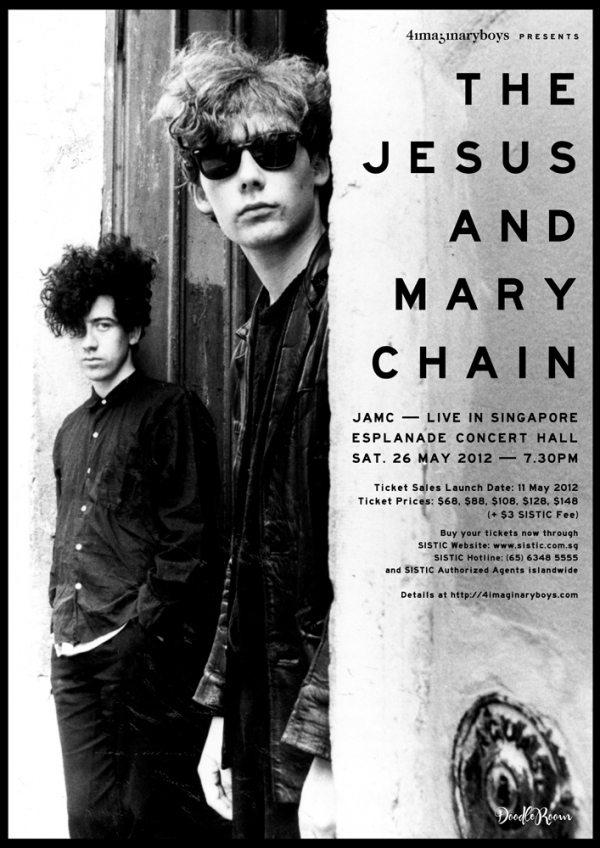