As far as electronic music went in 2013, you wouldn’t have been able to avoid a single mention of Jon Hopkins. Despite already making a name for himself by producing rich and immersive ambient music rooted in techno and electronica, he stunned critics and fans alike with his fourth album Immunity; a record so jarringly different from anything he put out yet still neatly fits into his discography. It’s a document of a man steadfastly ignoring the burgeoning trends of EDM but still attracted to the individual sounds it spawned. It was a remarkable step forward that shows Hopkins moving towards newer sounds but retaining a lot of the foundations that defined his older records in the first place. “A lot of these melodies [in Immunity] aren’t that different from what I’ve done from Insides,” Hopkins muses. “But creating those beats though, that was a challenge.”

Beginning with his debut studio album Opalescent, Hopkins has been compared with contemporaries like Brian Eno for expertly balancing melodic sensibilities within ambient compositions. It would only seem fit that he got connected to Eno himself for his 2010 record Small Craft on a Milk Sea. He produced a few more albums along with film soundtracks, trailed by growing fascination by critics and audiences alike. He has kept his head low throughout his journey, continuing to perform at various shows worldwide including an appearance here in 2012 for a Syndicate Subsessions event at The Substation.

His 2009 release Insides earned him accolades within the UK, along with an acclaimed collaboration with folk singer King Creosote, but it was with Immunity that the entire world sat up and paid attention. Receiving a near-unanimous reception from major music critics worldwide, it opened him up to bigger gigs with more prominent festival slots. He feels he has to thank his label Domino for that. “They’ve always believed in me, like they do with many of their artists.” recalls Hopkins. “They’ve afforded me that space to do what I want. Like my labelmates Wild Beasts (who we got to interview as well), they’ve only gotten better and more creative with each record yet they’ve stayed within Domino the whole time.” 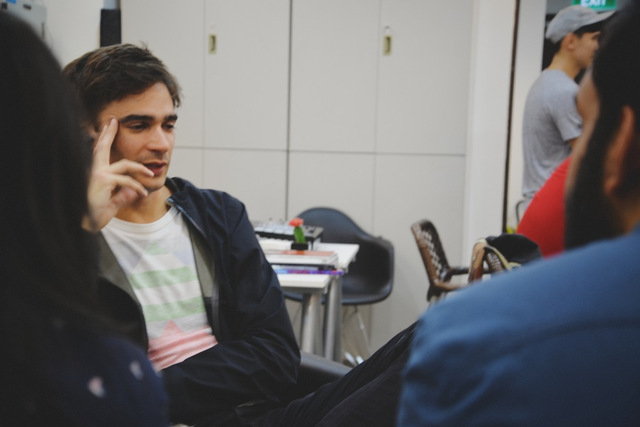 Despite being labeled a “producer”, he’s always considered himself a musician. “I’d rather do my own stuff than produce others.” Hopkins maintains. Perhaps it had to do with Coldplay’s 2008 record Viva La Vida or Death and All His Friends, where he was credited as a producer for the opening and closing tracks. “I merely supplied the instrumentals for those tracks, really. I don’t know why people keep thinking I produced them.” said Hopkins, bemused.

Other than his own records, he's been commissioned to score films with two already released: 2010’s brooding sci-fi thriller Monsters and recent apocalyptic love story How I Live Now. As he claims, it’s not as tough as it may seem. “It’s easier to score films since the visuals and stories are already there. I’d still rather work on my own though.” It’s a reflection of Jon Hopkins as a musician: fiercely independent and always looking for a challenge. His increasing popularity didn’t seem to change him much either. He’s still hard at work, continuing to do more shows despite the drawbacks of touring already evident in his disposition. He was visibly tired when we talked to him but he was still unfailingly polite and humble. “I just landed here [in Singapore] three hours ago actually. I just had dinner with some of my friends here that I made when I was here last time.” Hopkins reveals. Originally slated to perform for a Hostess Club Weekender scheduled on 8 Nov, it got cancelled and the people at NoPartyHere managed to grab him for a DJ set at Canvas.

It’s easy but ultimately shortsighted to build up Immunity as a culmination of whatever Hopkins had accomplished in his career so far, but no doubt it has gotten him a wider fanbase and even greater exposure. How does he feel? “Well I’m exhausted,” Hopkins chuckles. “It was really cool seeing my audience grow from like 500 to 5000 but I need a break.” Having toured relentlessly since the release of Immunity in June 2013, that’s only fair. That much touring has even affected potential output. He was in Tokyo before this interview to work on his next album but sadly barely anything came out of it. “I want to rest and take things slowly. I’m looking forward to doing nothing really.”

We only had a short time to talk to the man before his set at Canvas but we got to know more about him then we thought we would. Despite embracing newer sounds on Immunity, he still seems hard at work in pursuit of artistic growth that, judging from his current work, is immensely personal. His newest release, the EP Asleep Versions, sees him tackling some of the compositions from Immunity and reworking them with airier passages devoid of intense beats. Although he's taking a break next year, he seems invigorated even talking about his next album despite facing recent setbacks in Tokyo. As we packed up and readied ourselves to leave, he placed a copy of JUICE, with Montreal duo Blue Hawaii gracing its cover on the table and quickly snapped a picture of it. Pointing at the cover referring to band member Raphaelle Standell-Preston, he sheepishly tells us, “That’s my girlfriend.”

Asleep Versions, the new EP by Jon Hopkins, is out now.