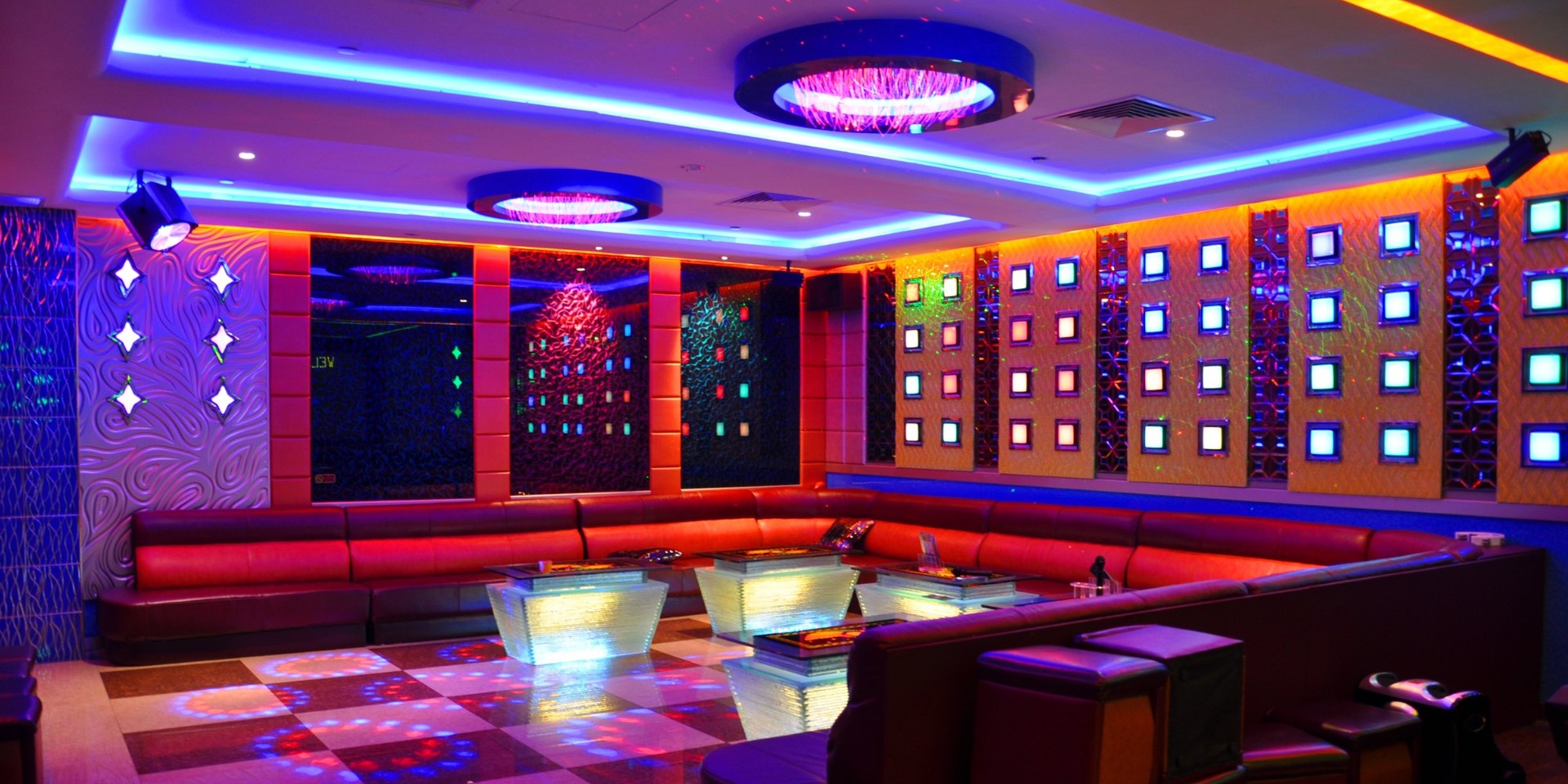 A karaoke spot is a place for friends to discover the lack of singing skills in one another, but the fun comes in finding the best songs to sing together.

Karaoke is a national pasttime, so we thought we'd highlight just some of the best places to suit your offkey singing needs on a day with your closest (and non-judgmental) friends. Some of these places are no-frills — just mics, a decent soundsystem, and a couch to round it up — but others offer their own unique pull.

Here are just some of the highlights. 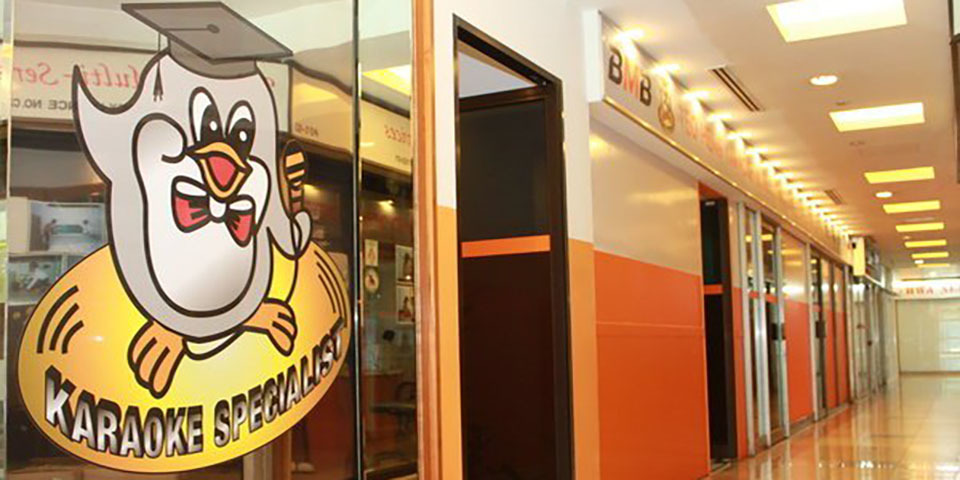 A clean cosy room geared with quality sound system, Teo Heng is definitely the top in mind to go for cheap Karaoke sessions.

With three types of rooms available depending on the size of the group, hourly rates per room start at S$8 for timings before 7pm, and $14 after 7pm. They feature enticing 3-hour package deals from Monday to Thursday, and a promotion where your sixth hour is free (marathon, anyone?.

Feeling like a little picnic sesh? Teo Heng is one of the rare places in Singapore that allow you to bring your own food and drinks (non-alcoholic).

The extensive song catalogue and frequent up-to-date selections will satisfy a huge array of music lovers. From old radio hits to the latest singles in English, Cantonese, Hokkien, Malay, Indian, Japanese, Korean and Mandarin are available in Teo Heng’s database for your indulgence. If Emonight isn't enough for you, they feature radio rock singles from th

While Mandopop would be the most updated ones at Teo Heng, their other language catalogues are not lacking behind either, so long you can type the name of your song in the original language (you have to type in Korean if you are looking for any Korean songs).

Address: 9 outlets across the country. Check out their website.
Rates: 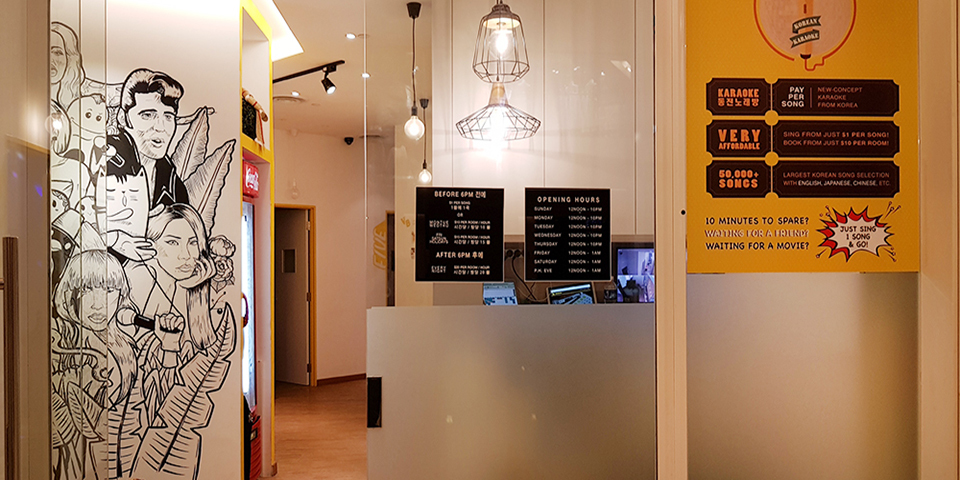 Inspired by the Korea’s noraebang (also known as singing room), VoiceBooth is the first Korean karaoke in Singapore.

Opened by a Korean couple, VoiceBooth has the most updated catalogue of Korean songs. In fact, their system updates itself daily. Though their list does not extend to indie music, this is a go-to place for Koreans especially due to their extensive Korean records.

While being the Karaoke place with a large Korean song bank, their system also includes English, Japanese, Chinese and even Vietnamese songs, but perhaps not as up-to-date in comparison to other karaoke places. Romanization of Korean characters and hanyu pinyin of Chinese characters are also included, and this saves singers from searching on Google.

Using the top karaoke system from Korea, the machine is mainly in Korean. But fret not if you have no idea how to read Korean characters, it is actually quite a simple machine to navigate through.

At just a dollar per song or $10 per hour per room, VoiceBooth not only provides you a space to sing your lungs out, you can even record your singing and send it to your email. However, if you are not into singing, you can also bring your instrument and use the room to play the songs you like, while referring to the score of the song flashed on the screen. 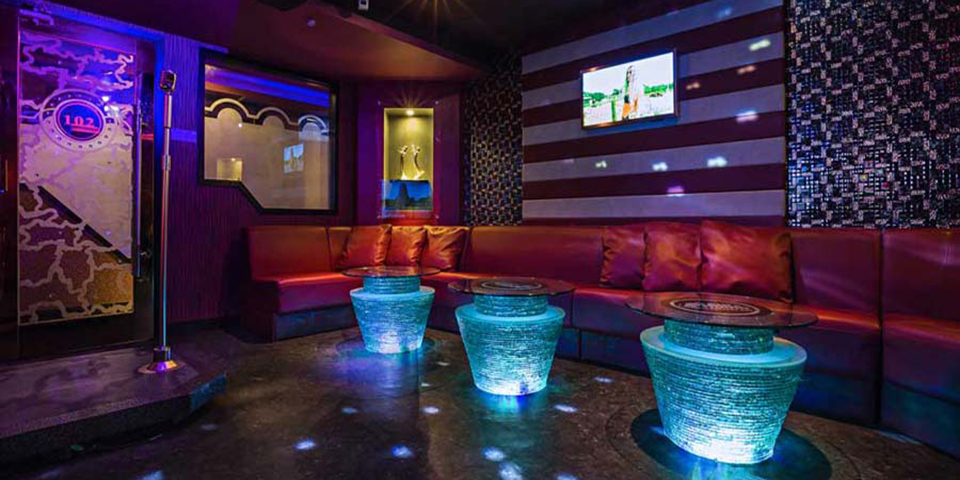 Situated near MRT stations, Cash Studio is a convenient place to have singing sessions, especially in town. Well known for their vintage microphones and ample space, this is a place suitable for company bonding sessions or family gatherings.

Unlike the usual touch screen system, Cash Studio (except for the Princep Street branch) uses mobile phone application CashKTV to conveniently view the selection of songs from your seat. This is especially attractive as you would no longer need to cramp around the monitor to search for the songs you like.

While their song catalogues in English, Mandarin, Japanese and Korean are often up-to-date, they have a wide selection of songs in Malay, Filipino and Thai as well. In fact, they have Japanese systems at their Ming Arcade and Cuppage Plaza branches that specialize in Japanese music!

At a relatively low cost, karaoke-goers can get to enjoy a luxurious comfortable place with rooms big enough to fit L-shaped sofas. We are sure this comfortable setting ensures you to sing for hours without feeling an ache in your butt!

WIFI: Yes, for their app only. 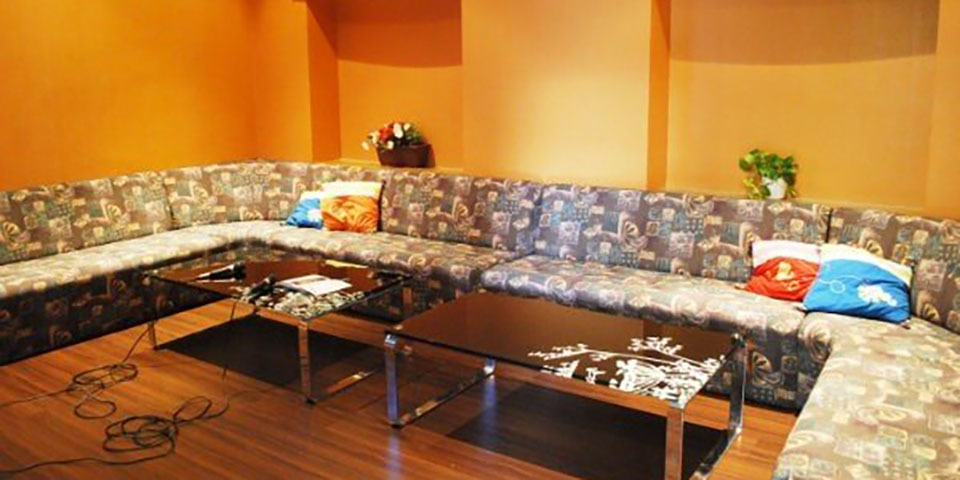 Ten Dollar Club KTV is deceptively simple and unassuming, but what you'll find is one of the most affordable karaoke places in Singapore.

But what this KTV attracts karaoke-goers the most is the cost. At a rather reasonable price of $11 per hour per person (betraying its own name, but we're fine), you can enjoy up to five hours of singing before 7pm and 3 hours after. What you are paying for is also free flow of hot and soft drinks. Though selections are limited, Ten Dollar Club is mightily cost-effective if you're looking for a night's worth of singing on a budget.

However, while we find it slightly difficult to navigate through the system to find the songs we want, they update their system catalogue every month. In fact, we are surprised to see how updated and extensive their English songs catalogue is!

Discounts for students, free flow drinks, and ample space for groups of friends — this place is one to note down.

Address: Outlets at Chinatown, Balestier and Downtown East. Check out their website here.
Rates: $11 per person for up to 5 hours in the afternoon or 3 hours in the evening, with a minimum spending of $40.
Opening Hours: Daily from 2pm to 2am.
WIFI: Yes. 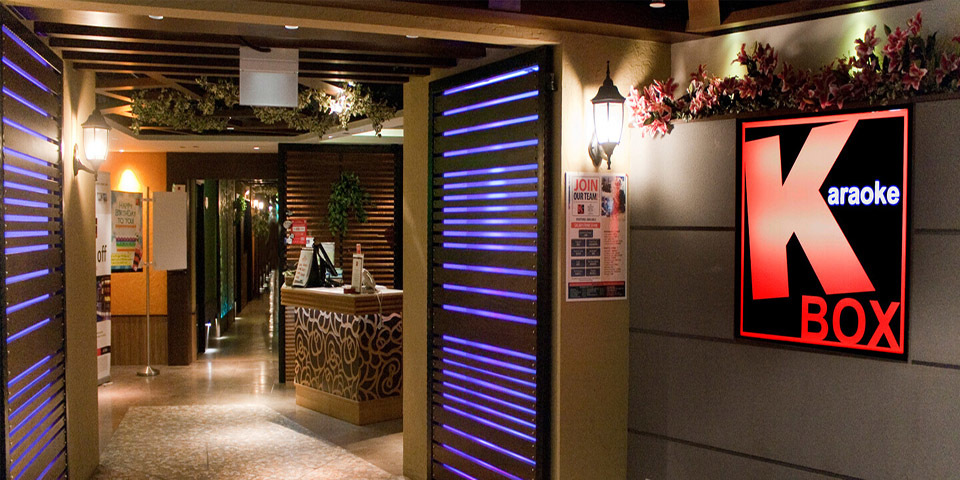 In the mid-2000s, K Box was a household name in Singapore. While they may not be as ubiquitous as they once were in shopping malls, they're still standing.

Just like some of the KTV spaces on this list, K Box provides free flow drinks and tidbits, along with rentable jackets and a space that's alcohol-friendly. If you've been to a K BOX, you would know they provide a catalogue extensive enough for Top 40 tastes. 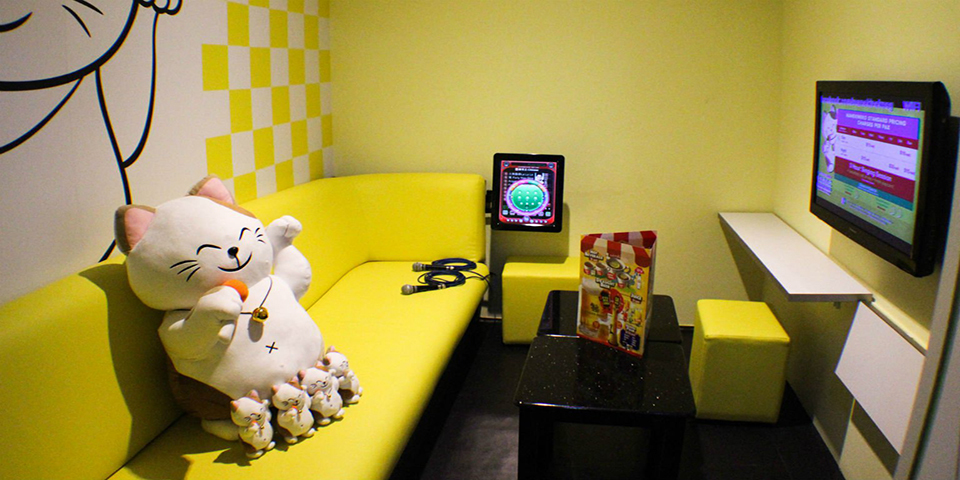 Under the same company as KKBOX, Manekineko's bright yellow background and cat logo are well known in Japan — with over 500 outlets in the country, the franchise has dipped its toes in Singapore with eight existing branches.

Rooms are incredibly vibrant, accompanied by stuffed toys and free-flow drinks. Honestly, the cartoon cats alone make this a must-visit. 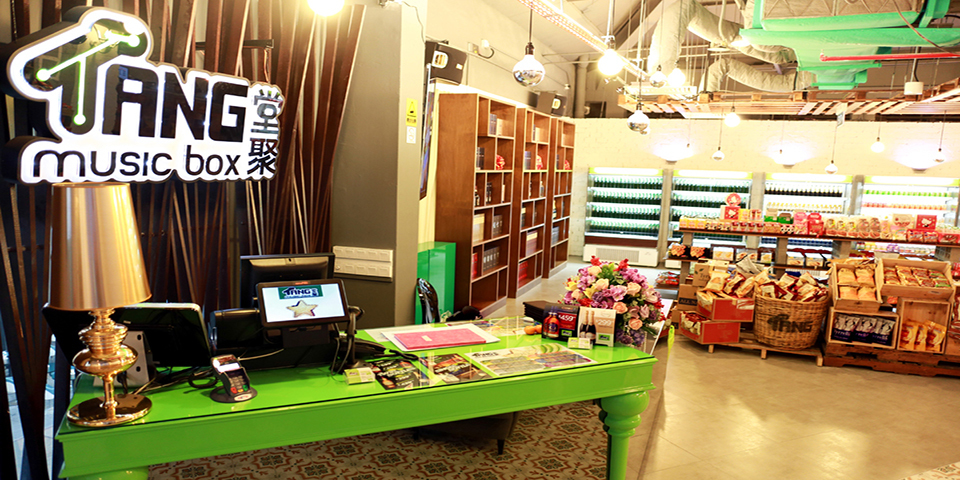 Don't be mistaken by its departmental storefront — Tang Music Box really is a karaoke joint.

The array of drinks and snacks that first greet you is just Tang's way of making them available to you before heading off for a session.

Unlike other karaoke places that charge on per hour or room basis, you can plan your spending at Tang Music Box based on the rooms you select. Instead of setting a cost per person, each room has a minimum spending required. For example, if you have three people, you can choose a larger room knowing that you might end up spending more.

Priced as low as $5 per pax per room, the spending can also include drinks and snacks from their "minimart" at the main hall. From bottles of beer going at S$13 to S$8 bottled drinks from Japan to S$4 snacks, the average spending per item will be S$5. 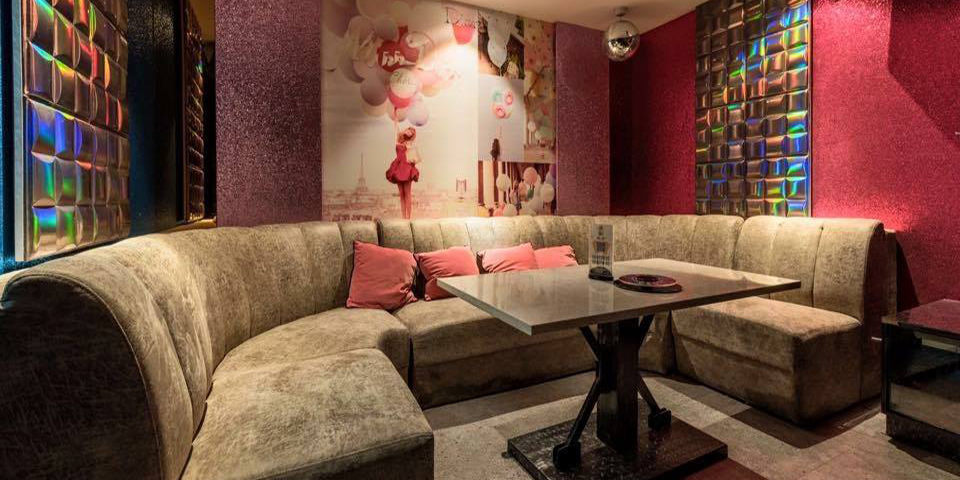 With its smallest room looking as though it can fit up to 10, Have Fun KTV only costs $52 per room per hour. At the price of two hours, you will get the third free, making it $10 per person for three hours.

Similar to Cash Studios, Have Fun KTV also uses a phone application to pick songs. Though the song catalogue is only up-to-date with Mandopop favourites, the sound system, space and cost are definitely worth a visit alone! 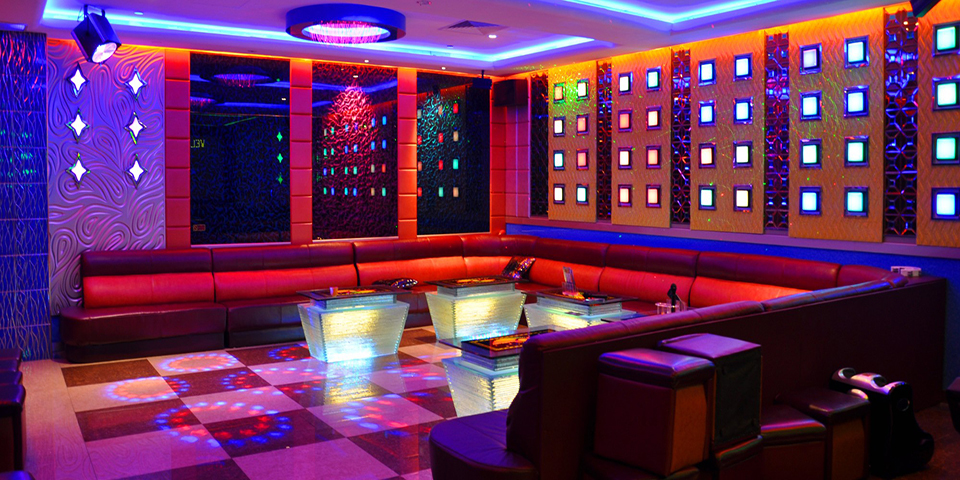 There's an overwhelming smell of smoke at Party World, but instead of pyrotechnic smoke, it's simply down to the KTV's designated smoking corners.

Blessed with glitzy, vivid decor — reminiscent of disco clubs from the 70s — a walk through Party World feels like a trip back in time. With 35 rooms in their Liang Court branch, they have almost the same catalogue as other karaoke venues.

Interestingly, they have more new Korean songs than old, while their Japanese catalogue is heavier on the classics. 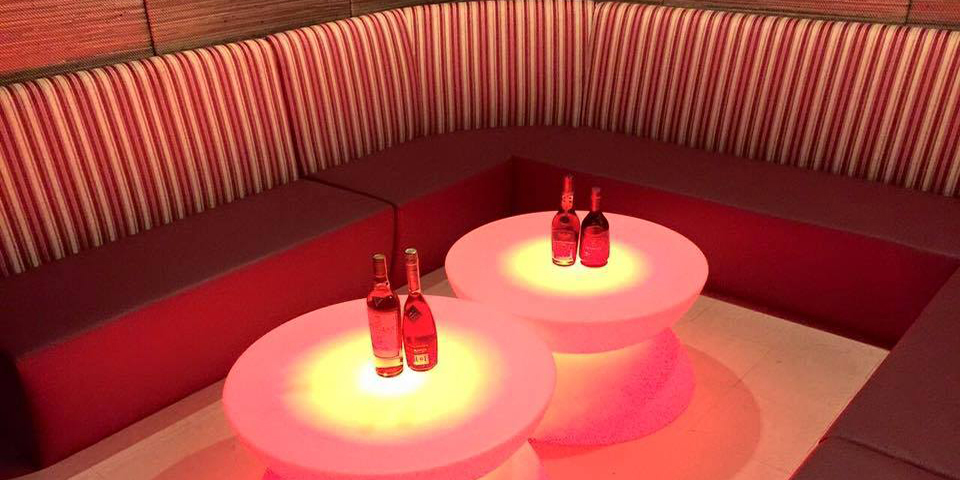 A local mainstay, K-Garden is elegant and affordable.

Their pride and joy comes with a specialized BLK sound system imported from Japan, and despite their legacy status, they've kept up a range of cheap rates that will never break the bank.

From Monday to Friday, 2pm to 8pm, it only costs $10 nett per person to sing for a six-hour session. The price also includes one soft drink or a bottle of beer.

With an extensive catalogue that's updated weekly, you can't go wrong with K-Garden. 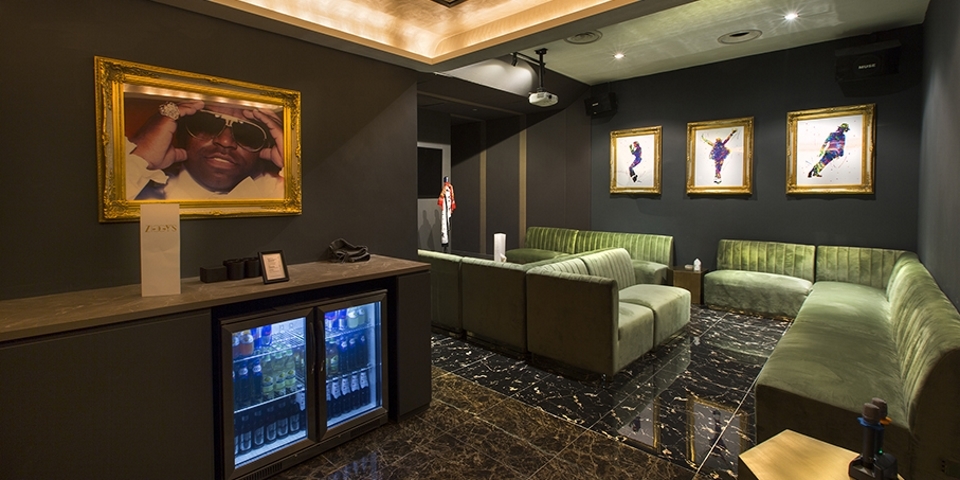 Ziggy's is luxurious and classy - nothing one would expect of a karaoke place.

Ziggy's has a total of 10 rooms - 8 of which are standard, accommodating up to 12 people. The remaining 2 rooms are VIP rooms, and can accommodate up to 20 persons, or be combined to accommodate a total of 40 people. Each room is furnished with swanky velvet couches, and equipped with up to four wireless microphones, a mini bar refrigerator, and props for customers to use.

Ziggy's extensive song catalogue includes all the latest songs, from English to Chinese, Korean and Japanese and more; but if you ask us, the luxuriousness of Ziggy's is enticing enough for us to make us want to visit.

Opening Hours: 5pm to 3am, Daily