When the news about Future Music Festival's demise broke earlier this year, so did the hearts of many ravers across the island.

It was not just in Asia — even the original Australian edition was pulled indefinitely. This year's leg in Sydney was pervaded with a drug bust and festival-goers rushed to hospitals, while the 2014 edition in Malaysia was infamous for the death of six people who, while were previously believed to succumb to drug overdoses, were unfortunate victims of heatstroke.

Even as organizers Livescape Asia had vigorously prepared for the festival's Singaporean debut, their license was unceremoniously rejected by authorities and subsequently, they were forced to cancel plans.

The whole journey hasn't been easy for the organizers behind the Australian festival franchise. Citing an underperformance of ticket sales for the past two years, Future Music Festival 2015 was then announced to be the last. With stricter regulations in Singapore and an all-round damaged reputation for EDM fests around the world, would this signal a worrying decline of its presence here? Ultra doesn't think so.

In fact, you might have even thought they were crazy to announce a Singapore edition, let alone just over a month after Future was denied their licence. "I understand there’s an association between dance music and drugs, it’s inescapable," confesses David Benett. "but from the very beginning we’ve been about the music, the excitement and the energy that can only be experienced when you get a big crowd of likeminded enthusiasts together. You don’t need drugs to enjoy that."

Benett serves as the Executive Director for Ultra Singapore, overseeing all the operations that will make up the upcoming Road to Ultra event, that's happening alongside the Singapore GP concerts at Marina Bay Sands. One of his biggest priorities is to make sure there's full cooperation with the respective authorities.

"First and foremost, there’s an emphasis on security." explains Benett. "We’ve retained the best security advisers to lead our security team and to also implement the protocols as dictated by Miami. Those protocols have been cross-checked by SPF. We've gotten an anti-drug campaign involved, so there will be their presence at our events. We're working quite closely with all of them."

"Ultra sees Singapore as the Miami of Asia."

Benett works with a local team of professionals based in Singapore and beyond, dedicating as much time as they can to continuing to scale Ultra in Singapore in the coming years. The team regularly cooperates with the head office of Ultra in Miami to ensure proper representation of the brand locally. The Ultra brand was founded in 1997 by Russell Faibisch, expanding around the world after the first Ultra Music Festival in 1999.

"Miami has been instrumental in helping us to create the correct protocols, to make sure we are able to satisfy any requirements that may exist." says Benett. "They've also helped to ensure the safety of our attendees. We work with them to let them know what we are looking for, what the limitations are, what the rules are as far the licensing goes. It’s about our working relationship with them that allows us to create the offering we can do."

Benett assures that Ultra has gone through the necessary protocol required for them to set up Road to Ultra, aiming to nurture that relationship in the coming years. "We've manage to communicate our intentions for Ultra to SPF and once they understood that’s what we were about, that was what really started us along our progress in Singapore. We’ve obtained all the necessary licences and clearly SPF is satisfied. We feel comfortable with what we’ve put together." 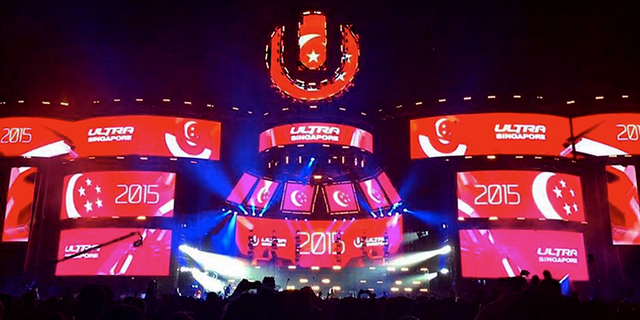 Certainly, there was a minor panic as the gates closed for Future's chance to ever happen in Singapore. ZoukOut has been the popular mainstay for Singaporean ravers even before the explosive popularity of EDM, so with the induction of Ultra in Singapore, they intend on making a huge impression, starting with Road to Ultra.

"We're really stoked with the response but we're also looking into the future, just continuing to expand the scope of the operation and bring more music to the masses."

For a pre-festival event, they've managed to get some of the biggest names in the EDM industry, all in one night coinciding with the F1 festivities. Road to Ultra will feature big name acts such as Skrillex, Nicky Romero and Alesso. The Singapore GP stages will also host arena acts like Maroon 5, Bon Jovi and Pharrell. Road to Ultra will also take place in Manila and Bangkok but Singapore was ultimately chosen as Ultra's flagship location in Southeast Asia.

"Ultra sees Singapore as the Miami of Asia." states Benett, who himself has been behind the decks as DJ Bento. "Singapore is going to be the one that will be our premium offering." Production plans for Road to Ultra are also very promising, hinting big things to come that's reminiscent of Ultra's blockbuster stage shows around the world.

"The stage has a dimensionality to it where it does not simply have a flat surface. It’ll really draw the crowd into it. It’s really quite cool, we have the benefit of Ultra Miami's stage production team to work on these designs alongside our own team to make it work here." Excitement has already been garnered, with General Admission tickets close to selling out while Premium GA and VVIP tickets have already run out.

The lineup for Road to Ultra Singapore (L-R): Skrillex, Nicky Romero, Alesso and Mija. For Ultra's festival debut, Benett hopes to "present a rounded offering because there are other sides of the music spectrum that a lot of the people, espeically those who are newly indoctrinated into EDM, probably haven’t experienced."

Despite the logistical complexities of the pre-festival event alone, Benett and team are determined to keep moving forward and setting the bar high. "We're really stoked with the response but we're also looking into the future, just continuing to expand the scope of the operation and bring more music to the masses." They're anticipating a high rate of congestion like most festivals, so they've meticulously laid out the blueprints to organize the various tiers of attendees, while adapting a cashless system to allow the audience to make onsite purchases through topped-up wristbands.

Other than high production values and an all-star lineup, what else does Road to Ultra have in store? "Well there's this cool crossover during F1 because we have Alesso performing and he just remixed the most recent Maroon 5 single, ‘This Summer’s Gonna Hurt Like A Motherf****r’, while Maroon 5 themselves are having their own show at F1."

Could the band make an appearance at Road to Ultra? "Who knows? Crazier things have happened." surmises Benett.