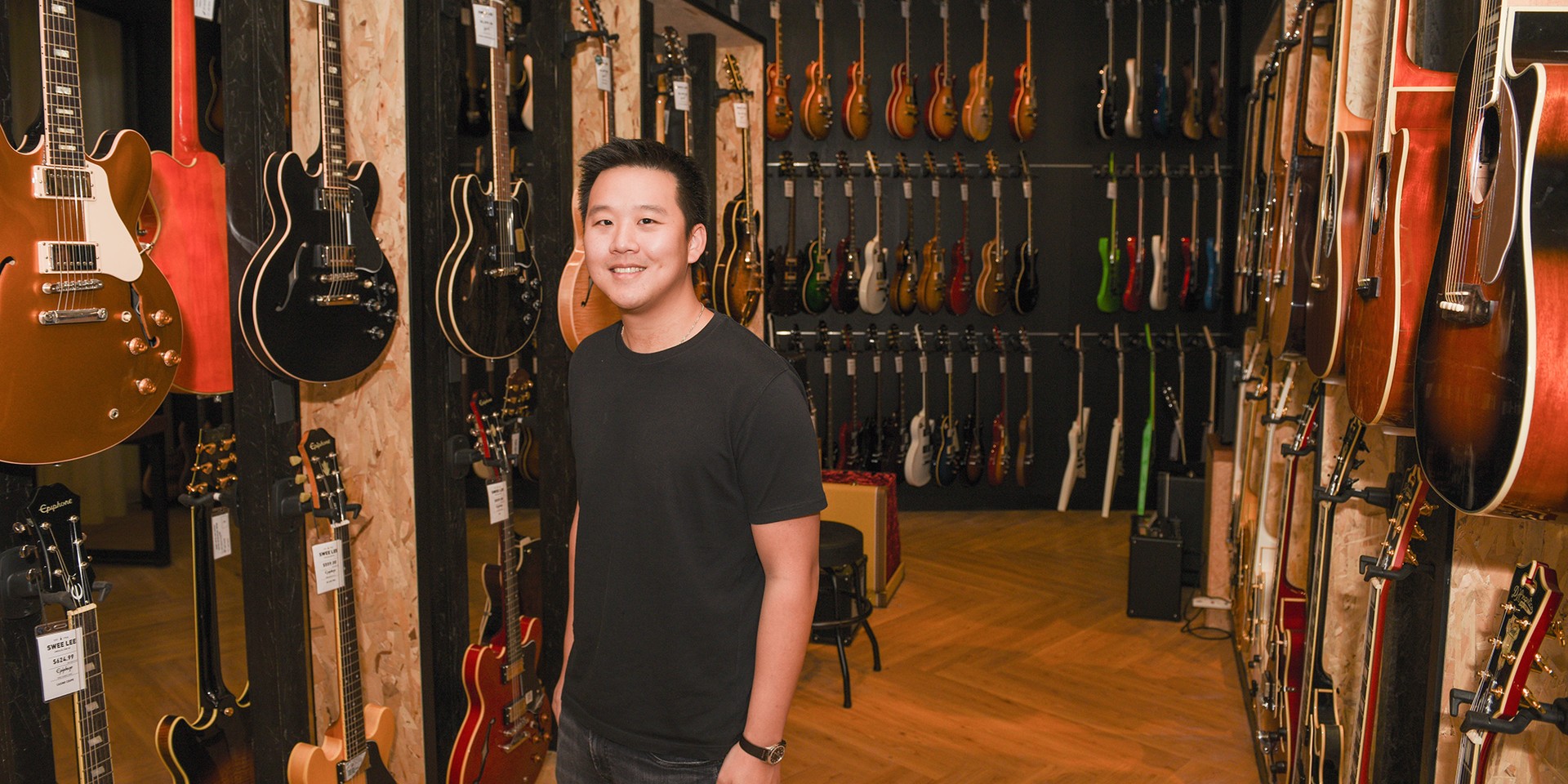 Kuok Meng Ru has kept music as a constant in his business endeavours — as the co-founder of BandLab Technologies, the managing director of music gear retailer Swee Lee, and the proud owner of a 49% stake of iconic media brand Rolling Stone. Although reportedly expressing interest in buying out the remaining 51% of Rolling Stone, Penske Media Corporation has since acquired the controlling stake.

But it's hardly bad news for Kuok, who has since remained buoyant about moving forward with Rolling Stone, along with his two local pursuits. Speaking to us at the grand opening of Swee Lee's new flagship outlet at The Star Vista, Meng Ru talks to us about his strategies competing with online retailers, and how Beyonce's Lemonade aligns with his main business philosophy.

How did you first get into music?

I was lucky enough to always be around people who loved music, but I would say I really got into music more seriously when I went to school in the U.K. I had a few friends who were not really into academia and the first questions they would always ask me were “What’s your favorite soccer team?” and “What music do you listen to?”. I used to recount the stories of the pop hits that I heard in Singapore, things like Robbie Williams and all those kinds of songs, and they said that wasn't real music.

So they gave me a copy of Radiohead’s The Bends and basically said, “Go into the room and listen to this, don’t come out until you like it.” That was really how I got into music and a year or two later, they really wanted to start a band and they knew I could sing a little so they encouraged me to pick up an instrument.

When I came back to Singapore for the holidays, I asked my mother if I could pick up the guitar and she agreed, and she told me about the company called Swee Lee that sold musical instruments.

She brought me to the outlet at Sims Drive and that’s where I picked up my first guitar, which was a Fender Highway One Stratocaster, it was a very affordable model, made in U.S.A. It was the entry level standard with nitro finish, I still have that today. What was nice about the nitro finish was that it dinged, so it became uniquely yours over time."

What led you to pick venturing into the music industry as opposed to other industries?

My decision to venture into this industry was very much a business decision. I was also very lucky to have been given the advice that one should only do something that they’re very passionate about, especially in business. To be able to merge my passion for business as well as music, to me, it was an incredible opportunity and when it came up, I really couldn't say no to it.

Being able to identify that there were opportunities within a business model in the music industry, as well as having inherent passion for music, which gave me an experience as a consumer.

I believe that the best businesses today, because of the internet, need to be direct to consumer — therefore I think it’s really important to think about what your audience wants instead of what’s just good for business."

Tell us about how you came up with Bandlab!

BandLab was a concept created between myself and the co-founder, Steve, who had the idea of creating a cloud digital action workstation (DAW), so it was basically integrating the Google Docs technology with GarageBand essentially.

For me, I was really lucky when I was in university because we were the first batch outside of the United States to get Facebook, so we really grew up with the social media generation — experiencing social media in its infancy and seeing how it’s progressed up till today.

When Steve had the idea of wanting to come up with traditional, professional cloud software, that’s where my social media ideas began to come in and it all blended together to become a platform where one could work on and share their music all in one place."

You’ve likened the next phase of Rolling Stone to Beyonce’s Lemonade. Tell us more about this philosophy.

I don’t think it’s just limited to Rolling Stone, I think it applies to every brand and product. Everything is evolving. Music has evolved to the point where Lemonade is a visual album, but it’s also a film. It isn’t just an album anymore, it’s also a film.

I feel like the best brands, products and experiences are fully faceted and that’s why, with Swee Lee for example, you’re talking about online and offline social awareness.

With BandLab, we have a social community, we have an online platform, offline hardware products and all that. BandLab is not an app — we have an app, but it isn’t an app in itself.

BandLab is a destination online where people are engaging in the community and so I think all true brands, as opposed to just services, transition into an experience where you need to be more well-rounded — in the same way that, to be a musician today, you can’t just be good at singing or playing an instrument. You need to be good at social media and a lot of other things.

You need to be more well-rounded today. I think that’s the same case for traditional approaches — you have to evolve, you have to be forward-thinking."

With the new flagship store, Swee Lee's introducing a lot of options into the mix — instruments, accessories, clothes, vinyl, and even coffee. Why this direction?

A business is about identifying the customer. If the customer values something enough, they’ll pay for it. If what they’re willing to pay is more than your cost, you have a business.

We’ve identified that even for just retail purposes, just selling someone a guitar has changed fundamentally because everything else in the world has changed. You need to keep evolving the services that you provide, you can’t stay with a certain service method forever.

Our biggest competitors are the best online stores in the world — Guitar Center, Amazon, all of that. That’s why for us, it’s very important for us to keep our prices very aggressive, so it’s just as cheap, if not cheaper, than any other place can provide because we’re local. If you’re in Singapore and you’re buying a guitar from somewhere else overseas, I see it as my personal failure. It means I failed to do my job.

We realized that just providing the product is not enough in this day and age. As we studied our consumers and what they wanted from a retail physical experience, we began to slowly make the changes. This wasn't something that happened over the span of a year, this was five years in the making."

Our biggest competitors are the best online stores in the world — Guitar Center, Amazon, all of that. That’s why for us, it’s very important for us to keep our prices very aggressive, so it’s just as cheap, if not cheaper, than any other place can provide because we’re local."

Tell us what you have in store for Swee Lee beyond the flagship store?

It’s all about pushing the boundaries, it’s all about making sure that the omni-channel approach keeps improving all the time and that experience of how the community moves to all over the region, the community is longer limited by location.

The internet has made everything far more accessible. There are a lot of improvements that we already have planned in the roadmap, how we’ll improve the environment, how we’ll make it more inviting and engaging to anyone and everyone who comes in. This will manifest online and offline as well through the community and the activities."

How do you see your brands — Bandlab, Swee Lee and potentially Rolling Stone — complementing each other?

I think with regards to the way we’re set up in a corporate perspective, we have a lot more brands under us now, like MONO, and we have a lot more stuff we’ll be announcing. But right now, Swee Lee and BandLab sit separately but it is something that makes sense to be combined and consolidated in the near future. We’re not touching that yet."

What do you envision the music industry would be like in five years?

The music industry is such a creative industry, it changes very fast. It’s extremely transitional right now, I think there are some underlying themes that will always be important. A lot of people say live music is the future, but it has been the past, present and the future.

Live music has always been there, and it always will be. Live music was around before there even was a record industry. There are fundamental changes that are going to happen, but I think what’s important is what happens when there’s a shift so that music is no longer a product, but goes back to being a service.

This is a part of how artists build themselves, you see some of the biggest artists in the world changing the ways they interact with the consumers and the fans and they have to be fully faceted as well — you can’t just be on a label and expect to make it big, you can’t expect people to buy music the same way they did back then, you have to keep innovating on the business model.

Being an artist now is like being a business, therefore the evolution in the industry is the same thing that you see artists develop themselves."