It seems like Iceland can do no wrong with all their music exports, and we have here for our final instalment of the Laneway Special, the magical six-piece outfit Of Monsters And Men. Songs peppered with loud HEYs, their tendency to 'add on instruments' and epic, infectious choruses that rouse the crowds, it is only sensible that they are a festival lineup fixture. We talk to Brynjar Leifsson ahead of Laneway.

Hi Brynjar! What are you up to nowadays?

I’m just enjoying being home and sleeping a lot.

2012 was a big touring year for you lot, what were some of the memorable ones?

The best gig we played at was probably Lollapalooza and the Reading & Leeds Festival. We played so many shows but those ones were the big ones.

At these big scale festivals I’d imagine you guys would be sharing the stage with other established musicians, were there moments when you’d get starstruck?

Yeah, when we were playing Reading, or Leeds – one of those two – Dave Grohl pulled up in a golf cart. He was coming to watch the band who was playing just after us, I think. That was pretty good, to see Dave Grohl.

Did he stay long enough to watch Of Monsters And Men perform?

Um not that I know of! But it was cool seeing him.

We get a lot of diverse sounds from Iceland – there’s metal and post-rock and the sorts – how did you guys settle on the distinctive Of Monsters And Men sound?

We started with everything very acoustic actually, there was only one electric guitar and all that. But as we started writing more, we decided we needed something more. So by the time we went to the studio, we all wanted to record something live. We started thinking we wanted something simple but I guess in the end it was not so simple, we added more instruments and then it just kinda happened. It was all out of impulse, I guess.

Before you started as a band, did you all know each other?

Me and Nanna we went to the same high school. We’ve known each other for ten years or something, we grew up in neighbouring towns and went to the same school. And then Raggi, is Nanna’s boyfriend’s best friend haha, you got that?

And then the rest of the guys in the band are just friends with Raggi, so that’s how we all met!

For a relatively big band, do you all have the same tastes in music?

Ah no, while we all have a few bands that we can agree that we like, but we come from different backgrounds. Like Kristján used to be from a hardcore band and Arnar used to be from some kind of rock band. Nanna and Raggi, they like Bon Iver and more folky stuff. And I just listen to everything. I listen to hip-hop and surf music.

Anyone in particular you’re listening to now?

I’m not sure but I know we all like Blur! 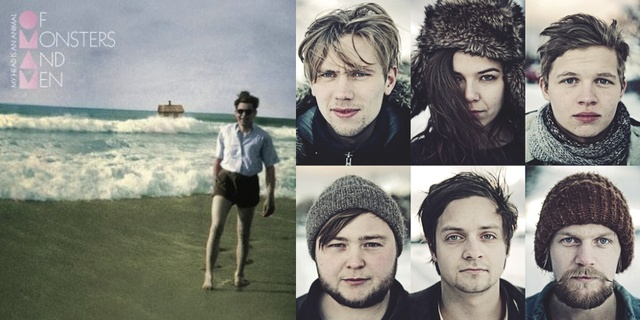 Last year you performed a show in New York, with a 1930s circus theme, tell us about it.

It was organised by MTV or something and they asked us for a theme and we thought ‘1930s Circus’ would be cool and fun and they just went along with it!

Cool. Any chance you’re going with themes for the Laneway shows?

For people who haven’t had the pleasure of seeing Of Monsters And Men live, describe how a set sounds like.

I would say that our stage performance is very energetic because when recorded the album, we had tonnes of instruments that we just added and added on without extra people coming into the studio to play it so when it’s just seven of you on stage, you have to make up for it and give it all you got. We just try to play as loud and have as much fun as we can. We feed off the audience so if the audience are having a good time, we’re having a good time.

Talking about playing loud, a lot of our followers are curious about the new album. Will it be louder, will you be trying out new stuff?

Yeah, we’ll probably try something new but we haven’t really given a good thought about what we’re gonna do. Like with the last album we just went into the studio and recorded whatever we had because we loved what we were doing, so we’ll just be doing it like that. We won’t decide on anything beforehand.

This is where we ask questions from our readers, first up – who are the monsters and men from Of Monsters And Men?

Haha, well that’s for the fans to find out – isn’t that just a good answer?

Next, are there going to be any standalone Of Monsters And Men shows here in the future?

I’m not sure but I don’t think so.

Oh no, pity! Is this your first time in Asia actually?

Yeah, yes it is. We once had a layover somewhere but that’s it. This will be our first time going to Asia. I don’t know what to expect! Everyone says it’s supposed to be really beautiful and all. I’m just really excited to be going, really excited to just be there.

My Head Is An Animal is available in stores and iTunes.