Three solid hip-hop acts, a bunch of hype bands and some returning alumni, the official Laneway Festival lineup is out. From where we're standing, it looks mighty impressive with the likes of Daughter, King Krule, Four Tet, Danny Brown and Earl Sweatshirt. Still, we have to wait a little bit longer for the official Singapore announcement for any curveballs the folks at Laneway might have for us, the only Southeast Asian stop for Laneway.

But most importantly - what do you guys of the lineup and who are you most interested to see?

Before the announcement of the official lineup on 26th September, we play predictor pros again (or at least try to) and attempt to extract who from this stellar lineup is actually making their way down here. Not to forget, the Singapore lineup is slightly different than the Australian one. Join in on the fun! 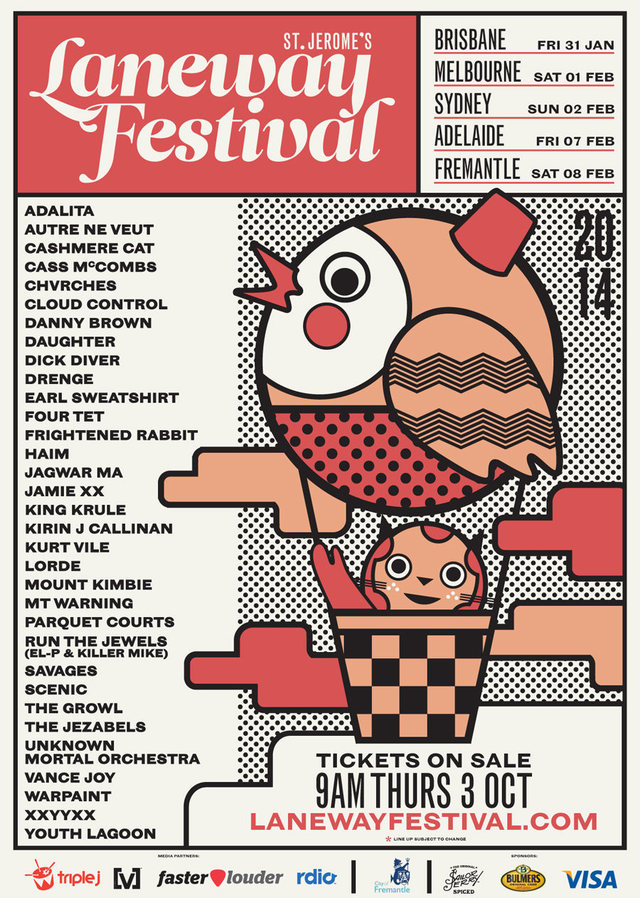 Quite an obvious choice, as they are a huge buzz band with their fame being intensely propagated by way of Pitchfork. Laneway has always been championing promising new music talent and this Scottish trio has done quite well in the past year in that field. We really enjoyed their debut studio album, The Bones Of What You Believe. Plus a lot of us here would want to see Lauren Mayberry because she is supercute.

Standard music festival staple: summery, singalong melodies and in the genre of dream pop - everyone's favourite festival genre. They also have a new album out so the Australian group will have plenty to play during their set.

Danny Brown is an amazing rapper and an even more fascinating performer live, judging from all the stories and descriptions about his shows. He gets indie rock music - expressing his desire to be the "Arcade Fire or the Bon Iver of rap". Unfortunately, he's still relatively small in comparison to the other acts (hip hop or non) so he'll probably stick to the Australian circuit.

The much anticipated arrival of Elena Tonra will be warmly welcomed by a lot of us in Singapore. Already impressing us with her demos, EPs, her debut album and amazing covers of unlikely songs (Daft Punk's 'Get Lucky' and a mash-up of Hot Chip's 'Ready For The Floor' and Bon Iver's 'Perth'), Daughter will definitely be the leading lady of Laneway Festival 2014.

The festival lineup won't be complete without a grungey outfit (re: Japandroids, Cloud Nothings, Yuck). Bringing in some meat to the lineup, this English band comes with some ministerial level recommendation; shadow cabinet Labour MP Tom Watson wrote in his resignation post on his blog: "...And if you want to see an awesome band, I recommend Drenge."

From the OFWGKTA collective, Earl Sweatshirt, the youngest member, has built a name for himself with his precocious master of rhyme structures and zinging metaphors. Definitely a refreshing addition to the Laneway lineup as we've never had a hip-hop act on our lineup before.

A veteran in the Laneway Festival lineup, but never in the Singapore edition, we really hope Kieran Hebden (often mistaken for Burial) makes it down this time. After the inclusion of Nicolas Jaar this year, we have seen how even the electronic producers can bring the crowd to their feet. Four Tet will surely pull a great set in the midst of the other indie-er acts. (He's also the one where you can find us in the front)

Their 2013 offering Pedestrian Verse, enjoyed critical and commercial success, with some pretty dark lyrics, unexpected textures in some tracks, the use of horns, string and even distortion. Would be a nice addition to the Singapore lineup, to mix things up a bit.

They're so Laneway, that it is no surprise they're on this lineup. We were super sure that they would come for Laneway 2013, but hey, at least they made it in the end.

Sunshine pop with a psychedelic glaze, we hope to welcome Jagwar Ma to Singapore. Festival music staple from the get-go, it'll be nice to see Jagwar Ma opening for an otherwise long day being on your feet.

He already dropped by earlier this year (as part of The xx and his own showcase at Secret Service). He's more small club DJ than huge festival player anyway.

If there is one act we really want to see, it's King Krule and his brand of off-kilter tunes. With his deep, distinct voice that betrays his age and songs that are lyrically mature, Archy Marshall is one intriguing individual. In the midst of indie and dream pop acts, King Krule brings in some depth and introspection to your festival experience.

Stoner music, you need some! In a land where the stuff that induces stonerism is illegal, we'll make do with the king of chill wisdom. His breezy music and folk rock sensibilities will be a good fit to the fabric of Laneway Festival Singapore next year. With two stellar albums that we are fans of, we'd really like to see him in the flesh. Performing in the evening time preferably.

We've been a follower since we heard her single 'Royals' and we've been hooked since. Only sixteen years of age but already making headlines with her music. When Frank Ocean cancelled his set in the Splendour In The Grass Festival due to illness, Lorde was on hand to replace him, such a good sport.

We love Mount Kimbie, we really do. But seeing that Laneway Festival SG might be iffy about bringing in electronic acts here, we're guessing that they'd go with the bigger, more popular producer Four Tet. They killed it at Zouk last year though, and we'd love to see them live again.

Their self-titled debut album was met with universal acclaim when it was released in June earlier this year, and we'd love to see these two phenomenal talents on stage at Laneway Festival Singapore live. But we're not sure how audiences here would react - they're more used to the "indie music" concept of the festival and Run The Jewels are pretty hardcore hip hop.

Yet another buzz band, this one is a stickler for plus points. Post punk, check. All girl, check. British accents, check. Pitchfork validation, ultra check. No phones during set novelty, check. Although, that's not a good thing is it?

UMO enjoyed a lot of great success with their most recent album, II. Laid back, cheery guitar tunes, and psychedelic pop vibes are all good for a music festival here.

We'd never thought that a Laneway Fest Singapore act would come here twice (re: Yeasayer in 2011 & Yeasayer again in 2013) but we were proven wrong. Warpaint made their trip here twice in the same year and who knows, the Los Angeles girls could be playing here again next year.

Post-dubstep producer Marcel Everett is a smaller, riskier electronic act to bring in, so he might not even make it here. Maybe he'll drop by for a standalone show at Home Club?

Another great festival lineup, Youth Lagoon will rev up the ambient factor with his brand of dream/indie pop electronica. It would be nice to have Youth Lagoon as a festival closer, slowly easing you back to real life with tunes that compulsively listenable, as well as intimate and hush at the same time.

Tell us who do you think will be coming for Laneway Festival Singapore 2014!