Here we have it! After months of speculation and wishing and hoping, here is the lineup for Laneway Festival Singapore 2014. With festival season about to hit, we're pretty much tied up about what to think! So, with a little help from some good friends, we set out to find out what people think about the lineup. Oh, and here's a little Spotify playlist of all our favourite tracks by the acts coming to #LanewaySG next year!

I literally have no words. Couldn't have wished for a better lineup. Mind=Blown. Daughter, James Blake, Haim, like I'm just going to crawl into a hole and not come out again until Jan 25th.

It's always reassuring to see that the Laneway Festival is consistent in picking bands that are fresh in the industry and have the means to become the next edgy thing. Personally I'm stoked for Youth Lagoon, Frightened Rabbit, and Savages. And the James Blake exclusive is a nice touch. Though I'm slightly disappointed that we're missing Autre Ne Veut and Parquet Courts who're in the Aussie lineups. But who knows? Maybe Laneway still has some surprises up its sleeves!

Kurt CTDK / Vinyl Of The Day

Was expecting King Krule and Four Tet but still looking forward to Savages, James Blake, XXYYXX actually. Savages and James Blake were pretty amazing at Primavera. I caught them there, SO GOOD LIVE.

I think the Laneway Festival in Singapore is one of the best in our country. They have always brought in top quality acts that are relevant and popular among music lovers in Singapore. Personally, I'm really excited for James Blake, Daughter & XXYYXX. And I hope Daughter does their cover of Daft Punk's Get Lucky.

This line up has got to be the most versatile for the year. It's great to see more electronic acts coming to Singapore.

I think the lineup for 2014 is spot on! The people behind Laneway truly have their ears and hearts in the right place. I personally am excited to see Frightened Rabbit live as they have been a great source of inspiration recently.

Only one I want to see is Daughter. Loved their album so much I went and bought the LP.

This years seems a bit of a departure from previous years! A lot more electronic than folksy for sure. I'm really pleased to see lesser-known producers like XXYYXX and Mount Kimbie join the fold. Oh yeah and they're finally bringing Haim down! Was so sure they'd be coming last year so I'm chuffed.

I’m really glad they’ve kept the forward-thinking ethos going. It’s always a risk to break burgeoning bands instead of established names, but Laneway’s always been able to straddle that fine line between business and buzz. Although I’ve already seen most of the lineup live, I’m really keen to catch Savages, James Blake, Mount Kimbie and Daughter again. Of the bands that I haven’t seen, CHVRCHES and Youth Lagoon present the most intriguing prospects! Also secretly hoping for a Jamie xx + XXYYXX (featuring surprise guests xxyy) after-party at W.

No big hitters or major headliners for next year's edition of Laneway (although I'd love to watch Daughter, Savages, and CHVRCHES live) but I was really pleasantly surprised that the lineup includes a lot more electronic outfits - James Blake, XXYYXX, Mount Kimbie, Jamie xx. Post-dubstep finally gets some love! Four Tet though, he would have been an impressive addition to the electronic section. Kieran bro if you're reading this, we swear we won't call you Burial if you play a set here.

I think Laneway '14 is shaping up to be one of the best local festival here. The line up is everything that I can ask for and fourteen bands on the line up with possibility of an additional two bands. Hats off to you Laneway.

Chvrches, XXYYXX, Daughter, Haim... I'm very excited with the line up! Super excited that Daughter is coming because I've been listening to her album. I just checked out Chvrches a few days ago and it's also another act to look forward during the festival... and she's damn cute.

Well I have to say even though it is still a solid line-up on its own, it is quite underwhelming especially after the excellent 2013 bill. I was hoping Laneway would finally start adding hip-hop acts to Singapore's line-up since their AUS tour has three extremely solid additions (Run the Jewels, Earl Sweatshirt and Danny Brown) but sadly they were passed for more standard fare. Quite bummed over the omission of Drenge (which could've perfectly filled the void of the hard-edged rock act after this year's Cloud Nothings) and King Krule too.

However, not everything's looking dim because there's still a slew of acts I can't wait to see: Savages (who put out one of the best modern post-punk records ever), Unknown Mortal Orchestra (missed them when they came for The Peoples Party early last year), James Blake, Kurt Vile, Mount Kimbie, Frightened Rabbit and Youth Lagoon. It'll also be interesting to see Jamie xx perform since he doesn't have much original material to begin with.

The only two acts that caught my eyes were James Blake and Youth Lagoon. There are not enough heavyweights this year.

I guess that I was very surprised to see the entirety of the Australian Laneway line up translated over to the Singapore leg. This does not happen too often for transnational music festivals. But, it is a welcomed surprise for sure.

At this moment, the band that screams out to me will definitely be the Savages. They are raw, energetic and loud! Whoever said 'punk is dead' have not seen a Savage live performance. While Warpaint isn't gracing our shores (fingers crossed, they will be in the second wave of artists announcement), there is always Scot synthpop group CHVRCHES. What can I say, I have a soft spot for Lauren Mayberry. Who doesn't right...

Was more excited for Camp Symmetry than Laneway cause of William Fitzsimmons really, but from what I hear, The Jezabels and CHVRCHES should be my jam. But $150 for those two acts alone? I dunno.

The lineup is pretty eclectic and interesting but I'm not exactly blown away by it. It's lacking big names and there isn't any act that cements the festival for me. The closest would be James Blake whom I've seen before. I benchmark all Laneway Festival lineups against the amazing inaugural 2011 one, so in that respect the 2014 lineup is pretty light. Having said that it's good that we're being exposed to newer, exciting bands so it's still worth attending! 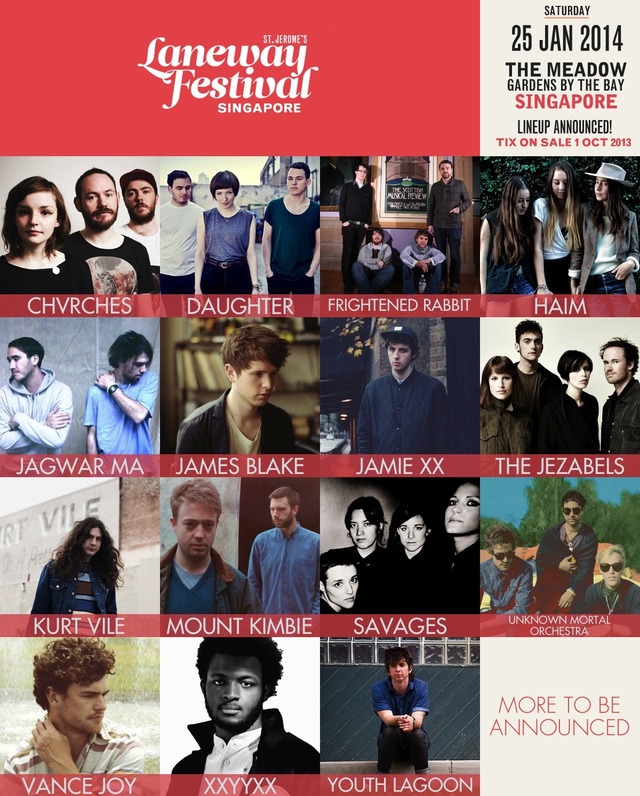 Tell us what you think of the #LanewaySG 2014 lineup!