It was that time of the year again. The good people at Chugg have managed to induct Laneway Festival Singapore from a newbie music fest in Singapore into somewhat of a modern cultural milestone for many music fans in the whole of Southeast Asia. Now on its fourth incarnation, they have not deterred from bringing down quality acts; from highly-buzzed pop acts like Daughter, Haim and CHVRCHES to the names on the fringe of electronic music such as headliner James Blake, Mount Kimbie, XXYYXX and Jamie xx. There was a noticeable decrease in the presence of rock music this year, with Savages having to lead the pack with Unknown Mortal Orchestra, Frightened Rabbit and everyone’s favourite king of chill wisdom Kurt Vile not far behind.

While Laneway Australia boasted an incredibly eclectic array of acts, we were frankly subjected to the more accessible acts. Of course, that isn’t always a bad thing but it would’ve been swell to see Cass McCombs, Autre Ne Veut and even Run the Jewels dominate our island. It’s all still good since Laneway compensated by giving three homegrown acts the opportunity to be the first ever Singaporeans to perform on the Laneway stage: future R&B sultress Vandetta, electronic up-and-comer Gema and experimentalists The Observatory. Here’s our report of what went down that day! 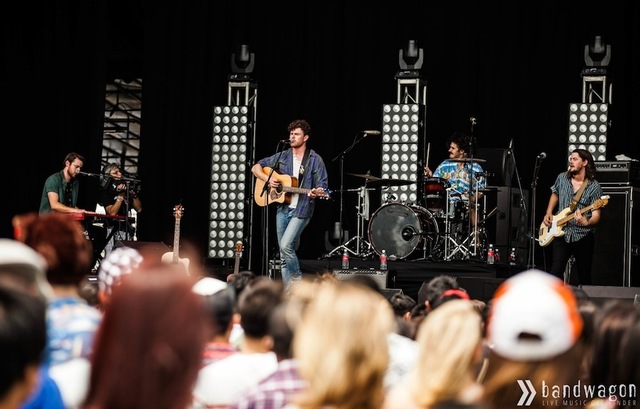 Discovery: Frontman James Keogh went to the same law school, took the same course as me.

Trivia: His runaway success hit 'Rip Tide' cost $700 to record and has gone top of the charts everywhere in the world.

Overheard: "This year's Kings of Convenience."

The first slot: Did a good job kicking off the day with chill vibes and breezy music. 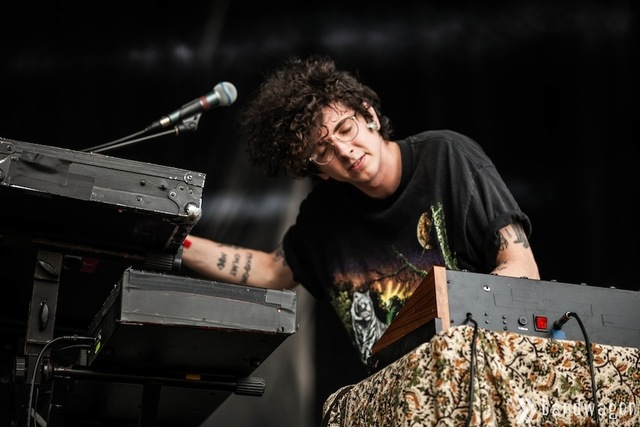 Breezeblocks: From one chill act to another, dream pop outfit (you need one for every festival) Youth Lagoon prolonged the chill vibes.

Afternoon: By putting them in early in the schedule, the crowds packed the place pretty early for Laneway this year.

Beardyman: Award for most epic beard this year goes to the bassist. Whoa. 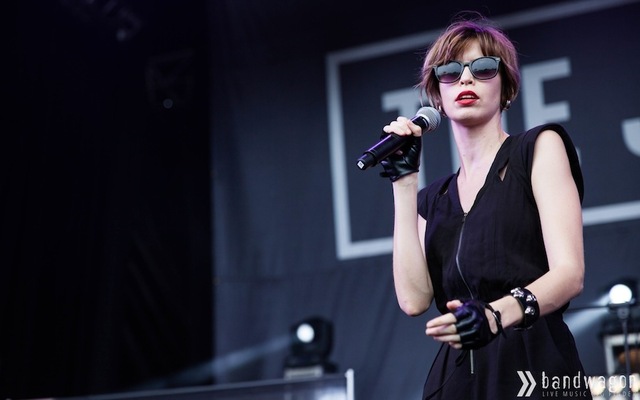 Back in town: This is the fourth time their back in town.

Hail Mary: As usual, Hayley Mary's vocal prowess was the highlight of the set.

A Little Piece: Debuted new track 'Look Of Love' from their upcoming album as well as some other new songs 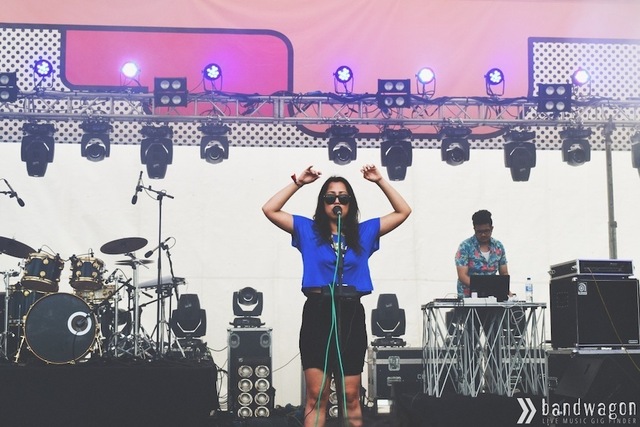 Highlights: A surprise cover of Nirvana's 'Come As You Are' which got everyone singing

Represent: The first ever Singapore artist to perform at Laneway, the turn out was good despite still being 'early' in the festival 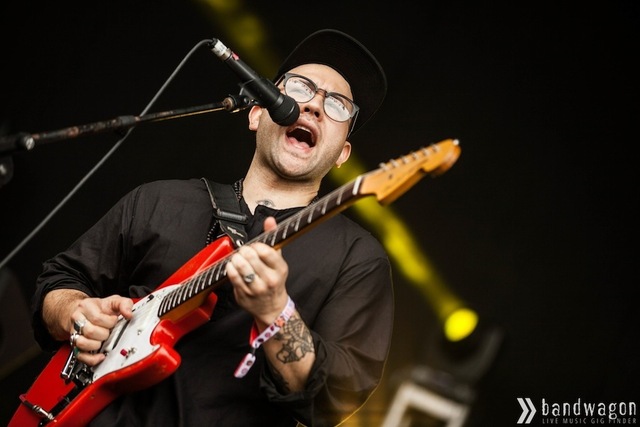 Set Sounds: Laid-back tunes that evoked as much psychedelic weirdness as it did for pure poppy R&B vibes

A Thought Ballune: Frontman Ruban Nielson's vocals were noticeably different without the dense lo-fi treatment it gets on the albums - there was greater clarity but we did miss that characteristic style he had achieved on record.

Ffunny: A big omission that puzzled many of us was leaving out 'Swim and Sleep (Like a Shark)' off the setlist, a tune that has replaced 'Ffunny Ffrends' as their most recognizable hit.

Round II: Two times in Singapore isn't enough. We want a headliner show next time. 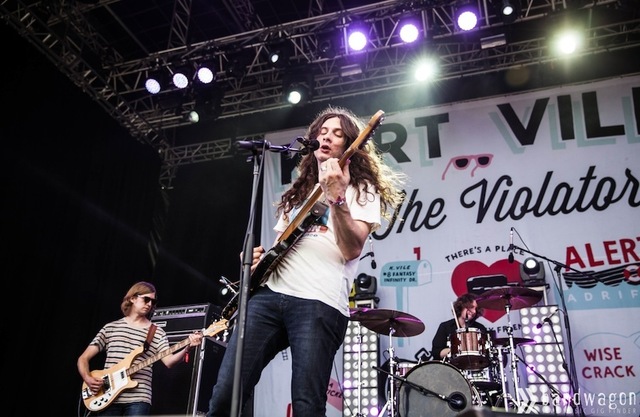 Aw shucks: Made a boo boo even before his set - cut the sound from UMO during 'So Good At Being In Trouble'

King of Chill: Smoking a cigarette, his long hair in the wind, working through the setlist of psychedelic alt-country slide guitar tunes, and also kicking off with a favourite: 'Wakin' On A Pretty Daze'

Trivia: 'Girl Called Alex' is about an old friend whom he had lost touch with, and he was nervous on what she would think of it. 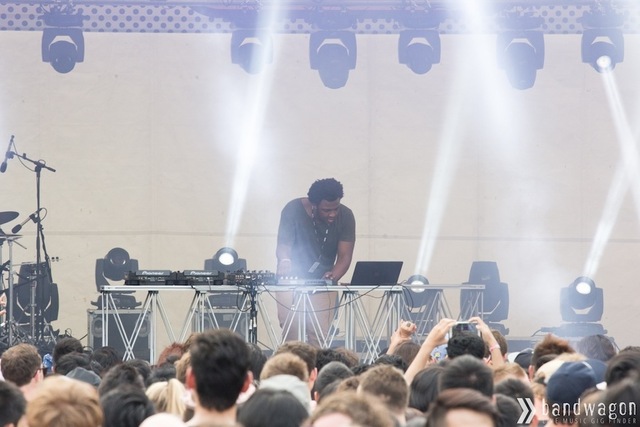 Set it off: Marcel Everett basically became the first all-electronic artist to play a set in Laneway Festival Singapore - the closest we had over the last three years was Nico Jaar (but even then he was with his band).

Surprise: The Cloud Stage area was packed to the brim, all the way back to the F&B booths.

Bass levels: Around 100 decibels too loud.

Deaf Haven: Quite a chunk of people left though; they couldn't stand their ear canals turning inside out.

About you: You know you're old when you're watching a 19-year-old musician (Fact: Everett was born in 1995) on stage who's probably accomplished a lot more than you did when you were his age. 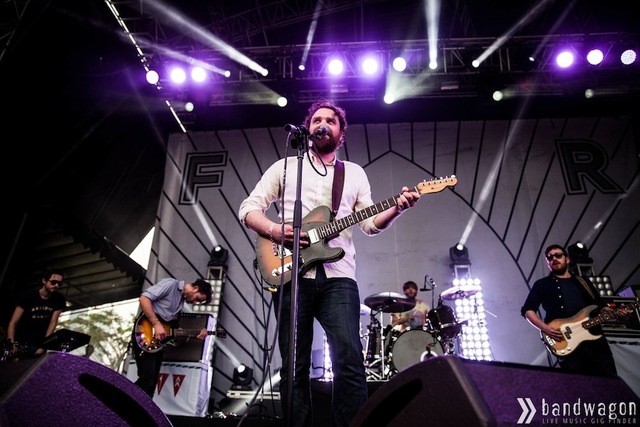 Keep Yourself Warm: Because of the heat, many enjoyed the anthemic songs of Frightened Rabbit sitting down with a cold beverage.

Role: A solid indie band fit for the Laneway lineup

The Modern Leper: A mix of old and new songs pleases the crowd, it's music you can get into at a festival, while waiting for your anticipated acts. 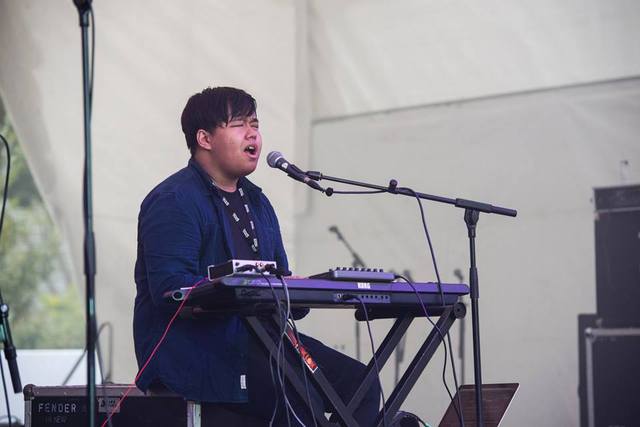 Could work on: Stage presence

Vibes: Slow jams, a lot of soul, good beats, nice break in the middle of the festival, but perhaps too early in the day? 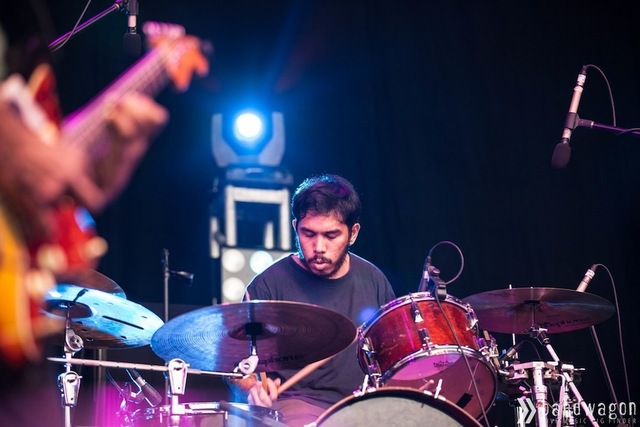 The Argument: While we're always keen on watching the quartet with every chance we got (usually in darker, cosier spaces), The Obs were certainly the oddest pick for Laneway

Sea Of Doubts: Following up the indie-friendly Frightened Rabbit with the atonal sounds of The Observatory was not the wisest choice, but props to Laneway for including them in the line-up

Headworm: An apocalyptic set that was entrancing and passionate, The Obs were clearly not interested in toning down their avant-garde tendencies which was admirable 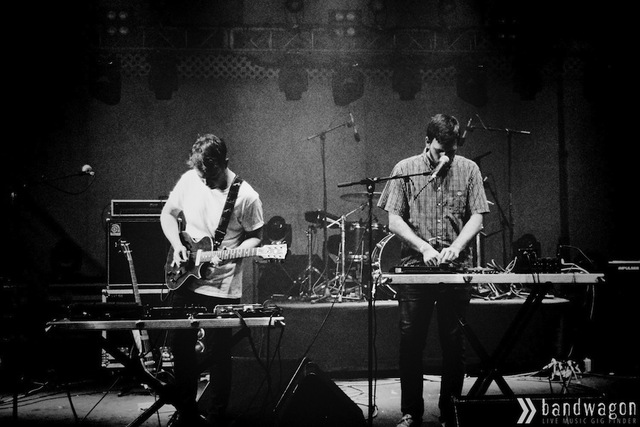 ESSENTIAL SONGS NOT PLAYED: 'Made to Stray' and 'Maybes'

Made To Stray: None of us did after their set… we were actually expecting a lot more songs (some of us even skipped Savages for Mount Kimbie!)

Trivia: James Blake (who used to be a touring member of the band) pretended to be their drummer during the Mount Kimbie press con. Oh Jimbo, you card. 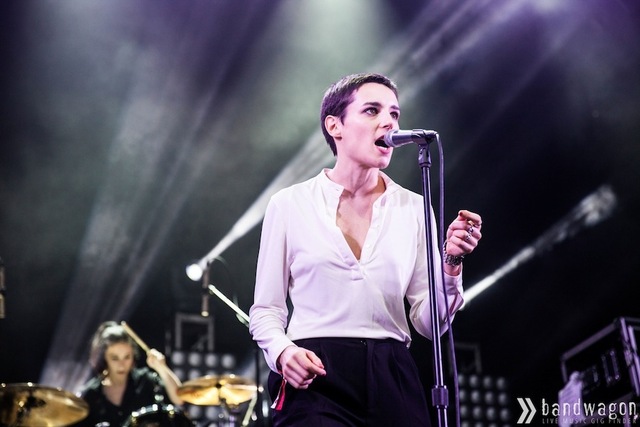 I Am Here: Savages are here to compensate the notable lack of boisterous loud rock acts on the line-up (last year we had Cloud Nothings, Japandroids and Tame Impala)

Silence Yourself: They sound just like the record, with an extra layer of deranged energy.

Jenny Beth: Harnessing a reticent aura not unlike Ian Curtis or Siouxie Sioux, sounding particularly excellent on vocals despite a sore throat (according to our sources) 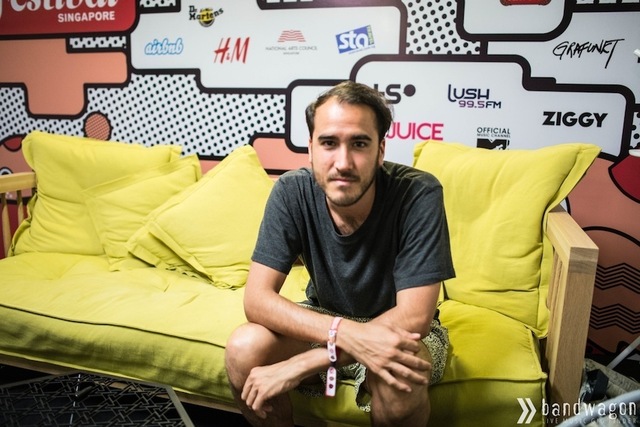 Man You Need: Lead vocalist Gabriel Winterfield suffered a cruciate ligament injury on the day itself

One man show: Jono Ma took on the duty to spin a DJ set instead

Highlights: Although the man needed to stir the dormant hedonistic musical spirit was somewhere beyond the Cloud Stage, Jono Ma dropped a pretty sweet remix of JT's 'Suit and Tie' somewhere in the middle of the set. 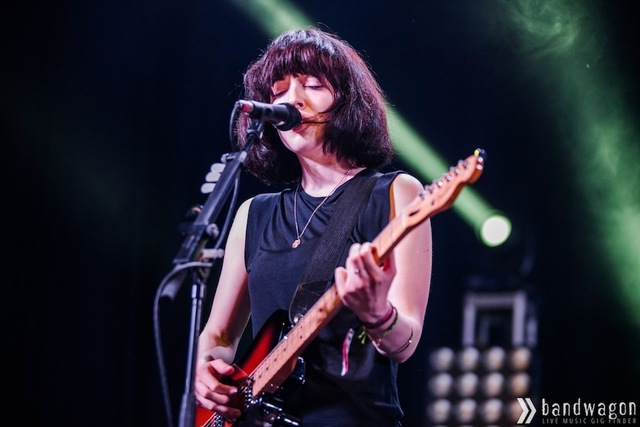 Soundcheck: The sound for vocals could be clearer and louder - the muffled effects made it hard to experience Elena Tonra's beautiful voice properly.

Refreshments: In terms of genre, Daughter's set stood out the most and was a refreshing sound from the other acts that night.

What went on: "Just a lot of people making out."

Warehouse project: Jamie's eclectic set was a warm up to the rest of the night

Set-up: Night club or what - he had activated lights and smoke machines, theatrical level to rival the two main stages 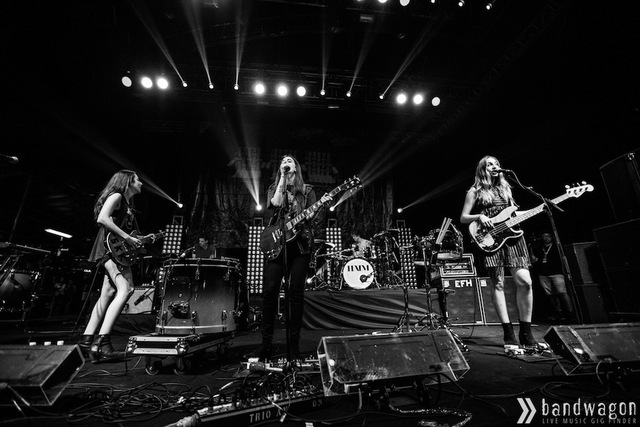 Cute: Honest stage banter and other antics such as taking a crowd selfie for their Grandma back home.

If I Could Change Your Mind: Brought their infectious brand of pop rock to the emotionally drained crowd (See: Daughter) 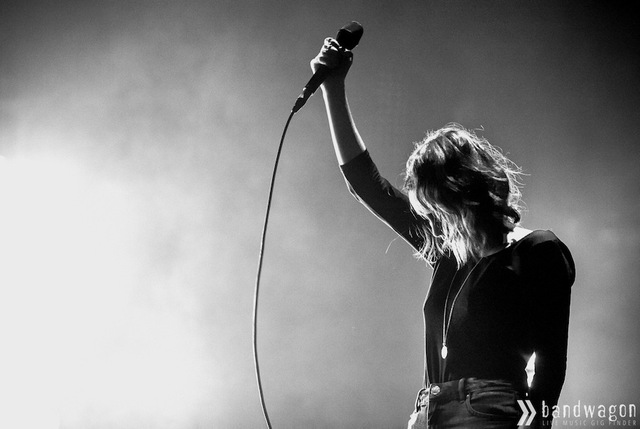 Science/Visions: Flanked by an impeccable light show, CHVRCHES held a a dramatic sermon comprising of their catchy synthesized hymns, oh mother we have synthed

Happy music for happy people: Though the songs started sounding similar to one another after a while, everyone seemed happy enough dancing to their bevy of hits such as 'Guns', 'Recover', and 'The Mother We Share' 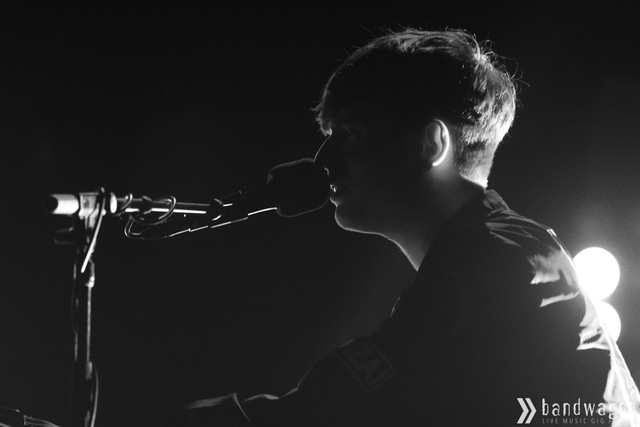 To The Last: Hands down, the best set of the festival.

Digital Lion: No such thing as a live DJ set? Watch James Blake live to change your mind.

"Come on Jimbo": Haters will always be hatin'. Here's looking at you, two-people-next-to-us who kept saying his set was 'too dark'.

Bass levels: 1000 decibels too loud - exactly the way we liked it

Life round here: The inability of the crowd to shut the f*ck up as requested by Jim in his last song "Measurements".

Fade To Black: Leaving his vocal loops to run long after he left the stage was chillingly beautiful - an end credits to Laneway Festival Singapore 2014.