So after a long period of guessing, it’s that time of the year again when the inaugural Laneway line-up is announced. It definitely ives up to Laneway’s legacy of eclectic picks: from seductive R&B courtesy of FKA Twigs and Banks, to hard-edged rock acts (Eagulls and Royal Blood) and fan favourites Angus & Julia Stone and Lykke Li. Of course, there’s even more but we got the unfiltered reactions of  a wide-array of people when they saw the line-up this morning.

Dammit I lost $5 to Daniel. (Made a bet that St. Vincent won’t come and now I can’t buy lunch)

Have always wanted to see Future Islands live, thanks Laneway you have made my dreams come true. Also glad to see .gif sharing the lineup lime(green)light (reference) with the likes of St. Vincent, FKA, Chet Faker, and more - they’ve been so hardworking all year long. It would've be even greater if FlyLo could come though! A lot of people would love to see him. And with that Layer 3 show, dayum. 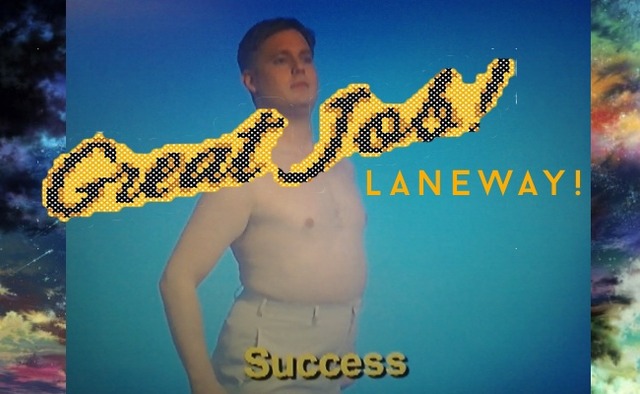 I must say I'm disappointed Flying Lotus isn't stopping by here with his Layer 3 show. That would've been a cross off my bucket list but it's ok because there's St. Vincent! (I want my $5, Delfina) Missed her first show in 2010 so I can't afford miss her again. FKA Twigs, Future Islands, Eagulls, Banks, Mac Demarco (missed his first show), Pond. Still happy despite the lack of hip-hop yet again. Plus there's .gif and Hanging Up the Moon! Solid choices.

It’s all about the PBR&B these days man, and Laneway’s validating it with next year’s lineup with FKA Twigs, Banks and Chet Faker. Also, it looks like synthesisers > guitars next year, which could spell trouble for the sound guys — audio configurations could mean slow set-up times and/or less than satisfactory sound.

Very pleased with the expansion of music from around the region, and .gif, Enterprise and Pastel Lite fits perfectly in the electronic heavy roster. Not so sure about Hanging Up The Moon’s slowcore acoustic tunes in the festival; it looks kinda out of place for a festival of electric kaleidoscope no? Still no hip-hop acts though, which I thought by now everyone would be cool with already. 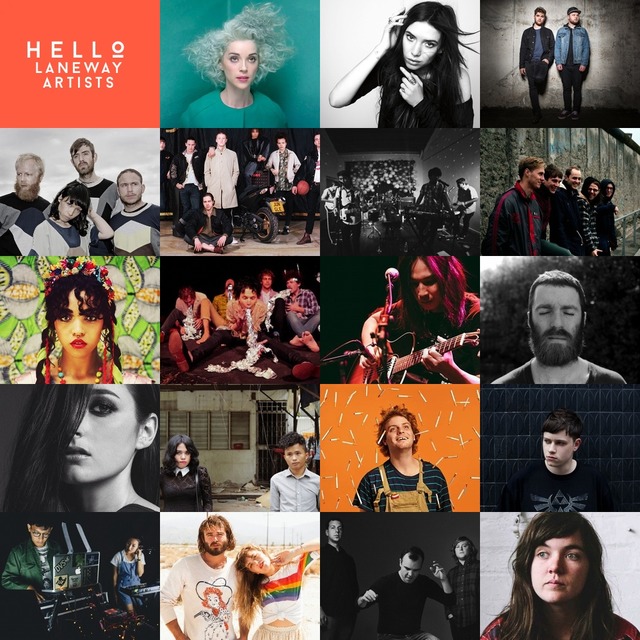 I’m definitely stoked about catching St. Vincent and Lykke Li live! I’m also glad that .gif gets the chance to play at Laneway, I’m a big fan of their groove, and I’m sure festival goers will love them. To me, half the fun of Laneway is in discovering new favourites (like The Jezabels in 2014) in the eclectic lineup the festival puts out every year, and I’m already preparing the Laneway playlist I’ll be listening to for the next couple of months- Future Islands is sounding fantastic so far!

Overall, I see quite a few recognizable name upon first glance. So, the general public will be pleased; especially with St Vincent!

But to be honest, it's the triple musical threat of Chet Faker, Pond and Little Dragon that has me hopping in my chair (you have to be seated for this Laneway lineup announcement).

And, I am looking forward to catch up and rising English rock group, Royal Blood. After all the excitement they are causing back home (sold out shows, fastest selling debut LP and Glastonbury performance), let's see if they justify all the hype!

Impressive! Referring to both the Laneway lineup and Bandwagon's predictions. Pretty spot on. It's nice to see that every year, the lineup keeps getting better and better. Hope to see  more music festivals with great lineups like this in Singapore. $165 for 19 brilliant acts. I'd pay anyday. (Kinda regret not getting the 5 for $500 deal though)

With Laneway’s line-up, I won't be surprised if tickets sold out. I haven't been this excited since Singapore played Pahang in '94.

As usual, Laneway's trying to hit all the bases - Angus & Julia Stone for the folk crowd, Mac DeMarco and Royal Blood for the punks, and - a surprising addition - St. Vincent for the more "experimental" crowd. At this stage Laneway could put whoever they wanted and it'd still sell like hotcakes, so I like that they're taking advantage of that by putting lesser-known bands in the mix amongst the more 'trending' acts. Hopefully they slot in the right band for the opener and convince buyers to show up early and stay late, give everybody on the bill a chance.

I also appreciate that they've invited local bands again - Just don't put .gif and Hanging Up The Moon at the dinner slots, please! 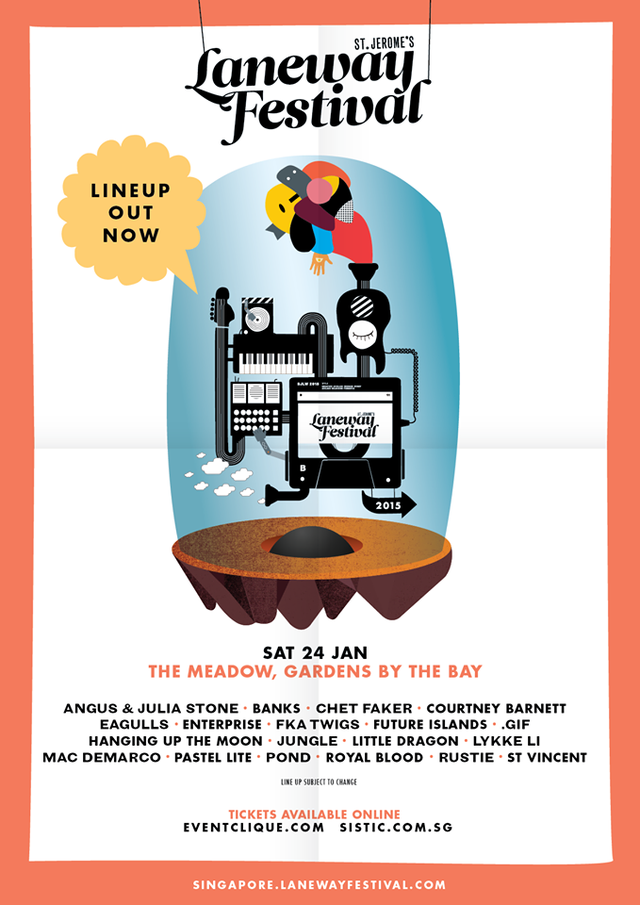 Strongest lineup to date. I literally let out a lil squeal in the studio when the lineup flashed on FB. I was alone. Felt silly.

Great to see Laneway once again leading the pack with this line-up, they are always way ahead of the game! I guess Banks, Jungle, Courtney Barnett, and FKA Twigs weren’t a surprise as you can trust always that the latest buzz bands from this and last year will emerge as headliners in the festival's announcements come October! They've always been very in touch with what’s happening in the UK as well so it’s nice to see the smaller guys like Royal Blood and Eagulls on the bill too. Then we’ve got the more familiar names and crowd pleasers: Pond, Chet Faker, Little Dragon… ST VINCENT? YES!!!!! Finally! :’) And lastly: it’s great to see they’ve expanded their A&R hunt regionally with the addition of Pastel Lite and Enterprise from KL; personally also looking forward to seeing Hanging Up The Moon!

I'm thrilled! For the most part. BANKS, FKA Twigs, Rustie, Chet Faker, Pond and Little Dragon are the obvious highlights for me, but frankly, the lineup is pretty strong everywhere. Its a pleasure to see acts like Lykke Li, Mac Demarco and St. Vincent returning, but I'm even happier to see [.gif] get the recognition they deserve. The folks behind Laneway have done much to broaden their palette by including more electronic and regional offerings (Malaysia boleh!), but still, it's pretty sad to see hip-hop totally ignored once again. I wanted Ratking, Laneway, I really did!

Love that my playlist staples like Lykke Li and Angus & Julia Stone are going to be here, really looking forward to catching acts-of-the-moment like FKA Twigs to see what the buzz is about, and definitely checking out acts I've missed out on like Enterprise and Pastel Lite.

2015's lineup has the requisite slate of new buzz acts (BANKS, FKA twigs, Royal Blood), but also balances them with obvious headliners who've been around for a while (St Vincent). I like the fact that Chugg Entertainment's building on last year's initiative to put local acts on the bill--this time including Enterprise from KL as well. There will always be people who'll complain that we're not getting the full Australian lineup. But hey, I'm happy enough that we even have Laneway, because no-one else in Southeast Asia does.

I think the 2015 lineup looks better than 2014's. Quality of the acts seem pretty substantial based on their releases. Although I wish that both SOHN and Caribou could have made it to the SG lineup.

Personally find the line-up one up from last year. Excited for Royal Blood, Little Dragon and Future Islands. Glad to see some local/regional representation again! So stoked on behalf of .gif!! I woke up at 3pm today and my phone was flooded with conversations/chats about the line-up, so I guess we're going to have a massive hipster picnic this Jan. But BUMMED OUT that flylo isn't coming down and we sorely need more hip-hop acts too ):

There's so much star quality to next year's lineup! BANKS' new album is fantastic and St. Vincent always puts up a killer live show. Really good seeing a few regional bands in the mix as well and I'm personally looking forward to .gif. Singapore represent!