Next year's line-up for Laneway Festival Singapore is full of surprises, from the return of indie heavyweights like Grimes and CHVRCHES to the inclusion of acts we've wanted to see for years (Thundercat, DIIV, Flume, Battles), along with incredibly promising breakout acts (Shamir, East India Youth, Tobias Jesso Jr.) and a notable inclusion of SEA acts, we're still dizzy over the 22-strong selection.

Here's what these people have to say about it as well. 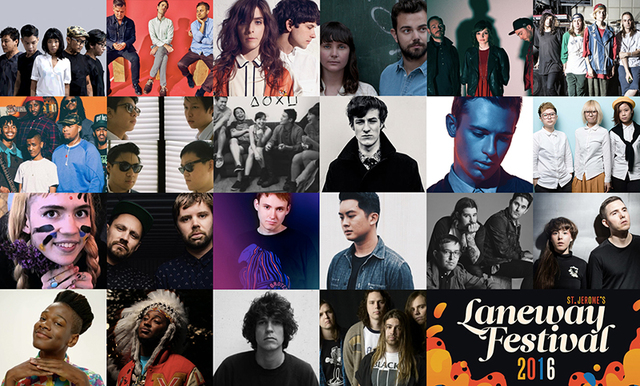 WHO I WANT TO SEE: Flume, Thundercat

To be perfectly honest, I was really caught off guard by the Flume selection — though it is a welcomed one. It has been a long time coming for sure. Can’t wait to hear his latest single ‘Some Minds’ in the flesh and fingers crossed that he brings his Pokemon card cannon along with him!

Otherwise, my colleagues have got me really excited about Flying Lotus' frequent collaborator, bassist Thundercat. And even though I’m a Chvrches fan, third time (in three years) is definitely not a charm; new album or not. You really can get too much of a good thing.

Some unexpected choices, for better (Thundercat) or worse (Chvrches, seen them twice although they know how to do a good live show), but overall I think this makes up to be one of Laneway's most exciting line-ups yet.

The best part about this selection is that I can geek out over the inclusion of Thundercat or Beach House and in that moment, I forget there's also East India Youth, METZ and The Internet — it just instantly sinks in that they're all performing here in one day, and it hits hard. That kind of pre-festival excitement doesn't happen a lot, and frankly, hasn't happened to me since 2013's selection so big ups Laneway!

OH SHIT DIIV IS PLAYING TOO

WHO I WANT TO SEE: Battles, Thundercat, The Internet

I woke up, saw this line-up, freaked out, jumped around for joy, and basically haven't stopped since. Seriously, do you know hard it is to write this while jumping?

This is legitimately, and without exaggeration, my favourite Laneway Singapore lineup ever. They've always been forward-thinking but this is Laneway being truly adventurous. The Internet, Shamir and Hudson Mohawke are all outliers but the one that really sticks out, the one that really got me to spit my morning coffee was THUNDERCAT. Thank you, bass god.

Of course, its all anchored by more traditional heavyweights like Grimes, Beach House, Flume and Purity Ring — which is a smart play. But in terms of the bands, Battles is the big one for me. We haven't had instrumental, experimental math-rock at Laneway since forever, and you couldn't possibly get a more exciting representative right now other than Battles because their new album is tremendous. I must also commend the promoters for expanding their local bookings from 2 to 3 acts for 2016. Riot !n Maganeta, Intriguant and Cashew Chemists are all outstanding, deserving picks — and I hope they get prominent slots.

WHO I WANT TO SEE: Grimes, Shamir, Hudson Mohawke

The 2016 lineup, with its lack of indisputably huge names (CHVRCHES and Grimes still aren't quite there yet, unfortunately) and a commitment to genre diversity, seems like Laneway Festival Singapore is taking the opportunity to get weird. After all, the festival has become well-established here with a fanbase eager to see who will swing by, year after year.

But they're ultimately still shying away from risk as the edgier and more anomalous acts on the Australian lineup have chosen to give Singapore a miss, namely PC Music acts QT and SOPHIE, rapper Vince Staples and pop punkers FIDLAR. All in all though, a good ass lineup (Shamir! Thundercat! Hudson Mohawke!) you shouldn't miss.

WHO I WANT TO SEE: GRIMES

WHO I WANT TO SEE: Purity Ring, Violent Soho, Grimes

I felt like last Laneway’s lineup was a bit thin, but this here is one meaty beast — seems like there’s an act for every taste. Stoked to be able to catch Purity Ring and Grimes. Chvrches seem to come here all the time. I’ve only recently gotten into GDJVB so I’m ready for some rockin' Metz… er maths. After getting introduced to them by local punk bands, I’m raring to catch Violent Soho as well. And it's awesome to see three Singaporean acts on the bill — I’m particularly excited to have friends who are flying in listen to Riot !n Magenta and see why I’m a huge fan of the local scene.

Now I’m looking through all the other reactions to see which unfamiliar acts to check out first!

WHO I WANT TO SEE: Grimes, Flume, Tobias Jesso Jr.

Looking forward to Grimes (missed her in 2013) and Flume (hoping the path to the Cloud Stage won't be like last year's). DIIV should be interesting live. You never understand what Zachary Cole is actually singing but it doesn't really matter. The new song 'Dopamine' has Real Estate vibes, but dirtier.

I love Tobias Jesso Jr, his sad piano songs and mop of curly hair. A few songs into his album and you'll also find yourself asking "How Could You Baaaaaabe???" Girls will swoon.

It's been 6 years but this is the first time the +63 is getting a representative. Happy to see Cheats part of the line up. If you've ever seen them live, you'll know they never fail to deliver the energy onstage. Good choice to introduce the new wave of OPM to a regional audience.

Check out our playlist for #Laneway2016!

WHO I WANT TO SEE: Beach House, Flume, The Internet

This is some crazy lineup!!!

One time I watched some Coachella stream of Purity Ring performing and I was like "Whoa that was such a sexy set." That was two years (or more) ago though. I hope they are still sexy live.

Talking about sexy, I’m super excited about seeing Beach House live!!! During the first Laneway, I think I went batshit crazy everytime Victoria Legrand sang, which is every song by Beach House. My group of friends were going “waduuh” a lot which is “wooow” in Indonesian and we pissed some guy off.

Years later, that guy who got pissed off is now my boyfriend. What a funny story!!!

I’m also excited to see Intriguant at Laneway. This guy. Always something new and crazy (good) every time I see him perform so he’s probably going to spoil his own market at Laneway (in a good way). Yey Laneway!!!

WHO I WANT TO SEE: Battles, METZ, Beach House

Not sure why the folks behind the festival here were reluctant to bring in hip hop acts previously — but at least there's more diversity now for the upcoming one with The Internet and Thundercat.

Also very happy to see the return of an instrumental act to the lineup (Battles!) and an outfit with a lot more edgy fang (METZ!). The other acts are pretty par for the course for Laneway really, but it's always good to see Beach House again — especially since they hit us right in the feels in the first edition back in 2011. A group of Indonesians standing behind me kept yelling "WADUUUUH" every time they started playing a song.

Ah Rainway, how we long to relive you.

WHO I WANT TO SEE: Grimes, Purity Ring, Shamir

Personally, it's quite refreshing to see the lineup's focus shift back to guitar-centric, fuss-free rock bands. While last year's primary powerhouse was Royal Blood, now we're treated to Violent Soho, Metz, Cashew Chemists, DIIV (guitar magic!) and of course, the labyrinthine mathy madness that is Battles — even without Tyondai Braxton in tow.

I foresee a lil war of synth spammage and "Who's cuter" spats when Chvrches go toe-to-toe with Purity Ring (Grimes wins, duh). And while I'm tempted to bet all my chips on Thundercat for best set, I'm mighty sure Shamir is gonna take the cake. That dude's one sassy firecracker, almost as eccentric as Riot !n Magenta's Ginny — and that's saying something.

WHO I WANT TO SEE: Thundercat, Grimes

So jealous that Cashew Chemists gets to hang out with them backstage. I'm also extremely pleased with the local lineup! Laneway has good taste.

WHO I WANT TO SEE: Thundercat, Hudson Mohawke, Grimes

Laneway Festival Singapore is always where it’s at and 2016’s line-up is further proof.

From Thundercat’s skyward funk to Hudmo’s mad-genius trap to Shamir’s next-level dance pop to Tobias Jesso Jr’s aching folk to Metz’s seismic noise to Grimes’ future-forward pop, there’s so much for us to look forward to.

And all that wasn’t even half the acts on the roster. Laneway, thanks always.

WHO I WANT TO SEE: CHVRCHES, Beach House, Cheats

Thrilled to wake up to the big reveal of the lineup for Laneway 2016! Can't wait to catch the return of my favorites CHVRCHES and Beach House, as well as Singaporean acts Intriguant and Riot in Magenta.

Most of all, really excited to see an act from my native Philippines, Cheats, finally make it to the Laneway stage! Laneway is my annual festival 'pilgrimage', so I wouldn't miss it for the world.

WHO I WANT TO SEE: Flume, DIIV, Battles

It’s times like these that I’m really gutted about missing out on Laneway’s $666 ticket promo. Nonetheless, I’m still really excited about the 2016 line up, particularly for Flume, DIIV, Battles and Beach House!

While I don’t mind Purity Ring, I seriously think they should have given Chvrches’ slot to someone else; since they’ve been here before. Lastly, I do hope that Flume doesn’t play at the smaller Cloud Stage. Going by the nightmarish experience last year with Chet Faker, I hope they either learn their lesson or keep Flume at the main stages.

WHO I WANT TO SEE: Thundercat, Cashew Chemists, Battles

So what I think about the lineup?

It's always exciting to have local acts on the bill so I'm especially looking forward to watching Cashew Chemists, Intriguant and Riot !n Magenta perform at the festival. Also currently losing it now that I know I will share breathing space with  Thundercat, The Internet and Battles. I've been hoping I'd catch them in 2016!

I do wish there was a solid hip-hop act though, that would have been perfect.

WHO I WANT TO SEE: Thundercat, Grimes, The Internet

As expected, the revealed lineup is eclectic and interesting enough for the diehard fans, but might draw a blank from the mainstream folks. Nice to see the return of Grimes, Chvrches, Battles, and Beach House, especially for those who missed them when they were here before. I like the inclusion of Thundercat and The Internet, who will provide a groove into things and make Laneway less indie-centric.

But sadly again the hip-hop acts like Vince Staples got snubbed here. Don't underestimate the power of hip-hop in a music fest!

WHO I WANT TO SEE: Thundercat, Grimes, Cashew Chemists

Super thrilled for 2016. The lineup looks stellar and I personally can’t wait to catch Thundercat again and Grimes. Also I know Cashew Chemists have a really special show lined up and I absolutely cannot wait.

WHO I WANT TO SEE: Grimes, Riot !n Magenta

Really cool to see local artistes like Riot !n Magenta on the lineup, and to see Grimes back in town to hype her upcoming record.