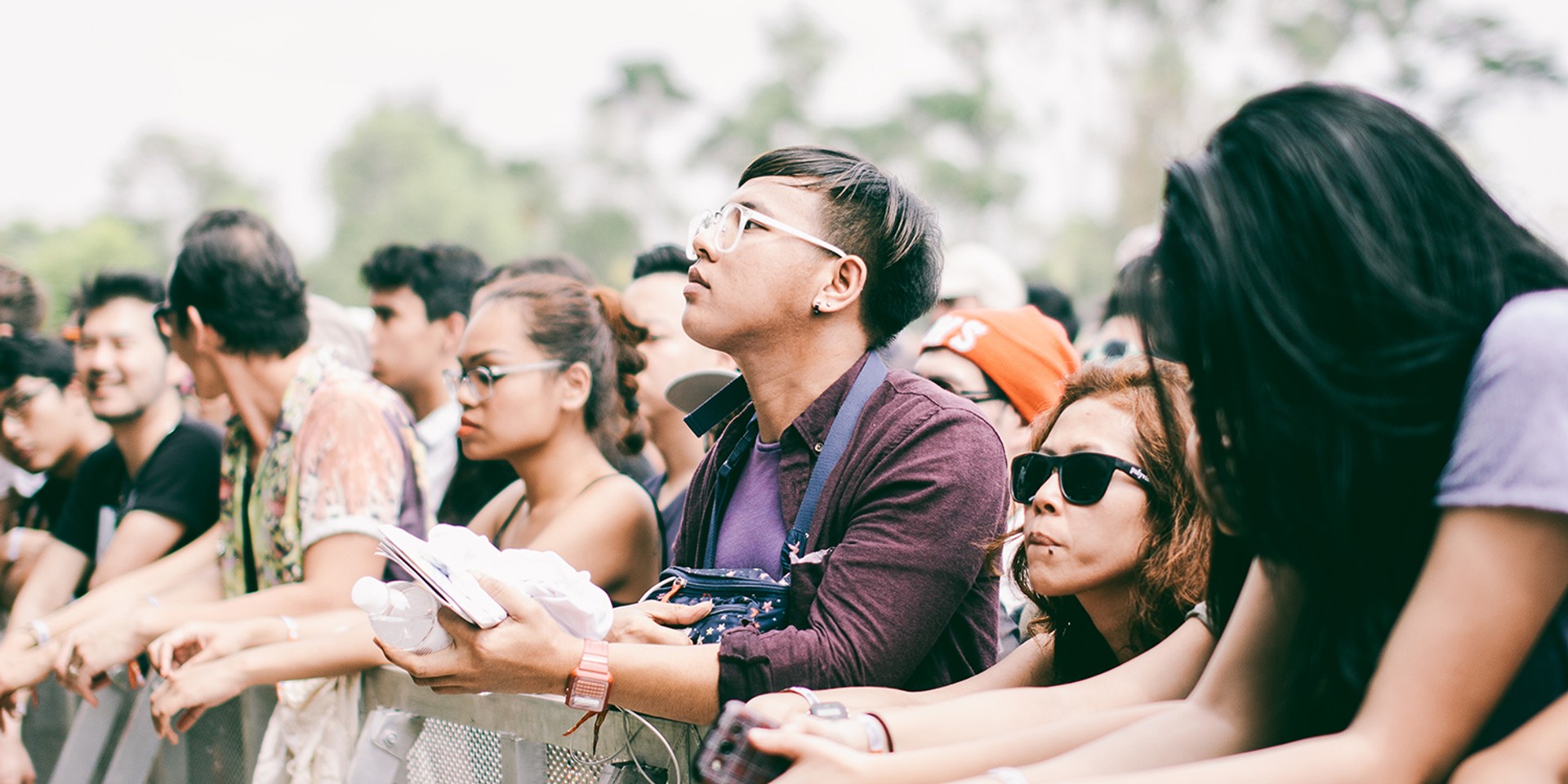 Laneway Festival has the tendency to have at least one major change every year — from the festival's shift to Gardens by the Bay to the addition of the Cloud Stage in 2014, most moves have been received warmly. Now, they're under fire for one seemingly slight regulation that has gotten many revellers up in arms.

Unlike the previous Laneway Festivals since 2011, this will be the first time festival-goers will not be allowed re-entry. This means for anyone who steps foot in the festival grounds, you'll have to remain there until your live music fix is satiated. Ticket holders will have their wristbands voided once they decide to leave, which means no quick trips to the nearby toilets or Texas Chicken for anyone who wants to watch Grimes or Thundercat.

The regulation was implemented when tickets went on sale, but it seems it was only discovered recently, when angry fans posted on the event page, calling the organizers out for what one attendee calls "a pretty stupid rule that nobody needs." 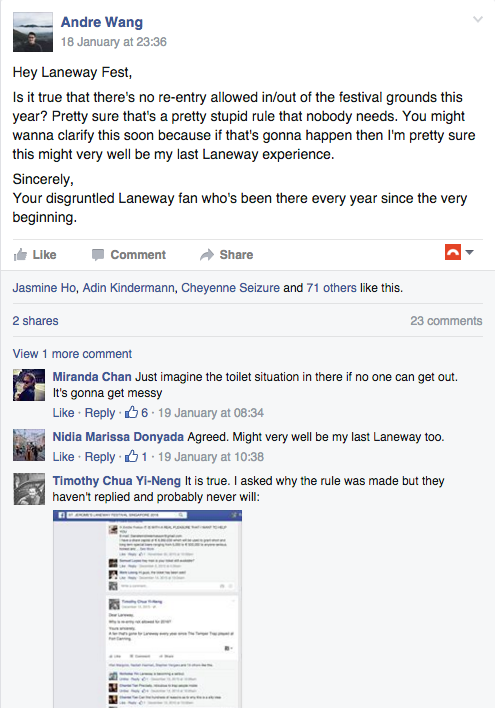 The multiple threats of calling this year's event "their last Laneway experience" are not really surprising, seeing how certain music fans have already been disgruntled at the festival's increase in ticket prices over the years, but it does beg the question: are these fans justified in their vitriol towards Laneway?

Truthfully, it is not a new rule to implement such a regulation as "no re-entry" to a festival. Several major festivals in Europe and Asia have practiced the rule, even Malaysia's Urbanscapes Festival and Sasquatch Festival in the US. However, more festivals have begun to allow re-entry through coordinated entry points that allow an organized stream of revellers to go in and out.

Hong Kong's Clockenflap Festival dedicates a tent to scan wristbands for re-entry, while Coachella even provides a grocery shuttle for people to stock up over the weekend. So why would Laneway Festival only pull this regulation now — even when other festivals are heading in the other direction? 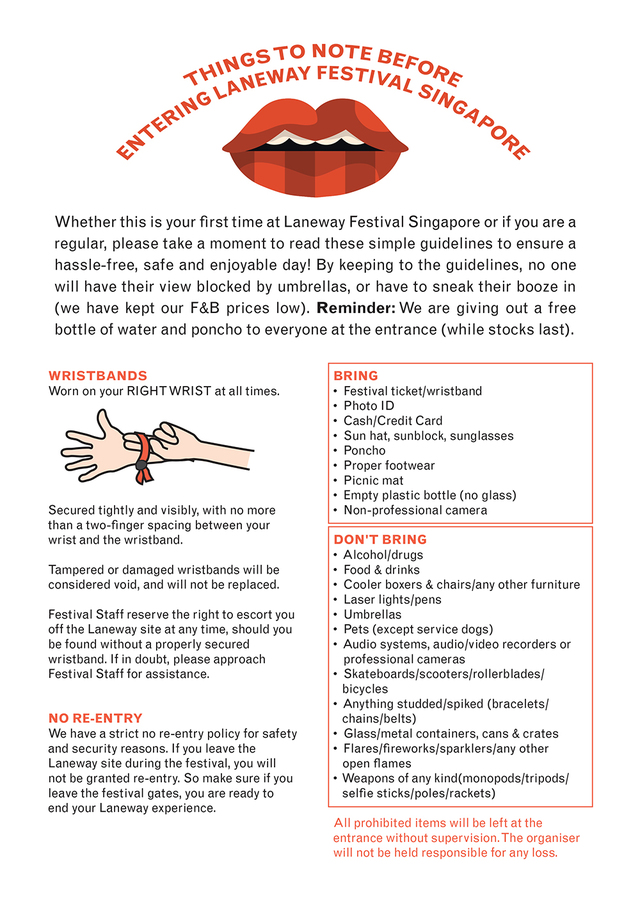 One thing about festivals in Singapore we have enjoyed is the ability to wander in and out, allowing us to escape the crowd and humidity when our frail bodies need rest. Sure, denying re-entry would keep gatecrashers to a minimum — people who could grab wristbands from friends leaving early – but given the relatively tight security of Laneway over the years, the amount of gatecrashers would have to be staggering for the festival to implement such a rule, specifically for this reason.

It definitely appears unfair to fans who've paid good money, especially those who followed the festival since its debut here in 2011. It even comes across as a possible money-grabbing move, because festivalgoers are forced to buy (expensive) food from the nearby stands instead of heading out for a dinner break in the evening.

...it does seem harsh to cut away the one option for fans to escape the (occasionally) punishing humidity, or to scour the area for more wallet-friendly options for sustenance.

According to Laneway, the move is for "safety and security reasons." The source of their concern is probably linked to what happened at Future Music Festival Asia last year. The former EDM festival was once a major attraction in Kuala Lumpur, but was immediately shut down by authorities after six revellers died on festival grounds from drug overdoses.

But while that was no fault of the festival, the deaths did happen in the festival's venue, and that made the festival liable — even though there were reported rigorous checks to prevent anyone from bringing in any drugs. 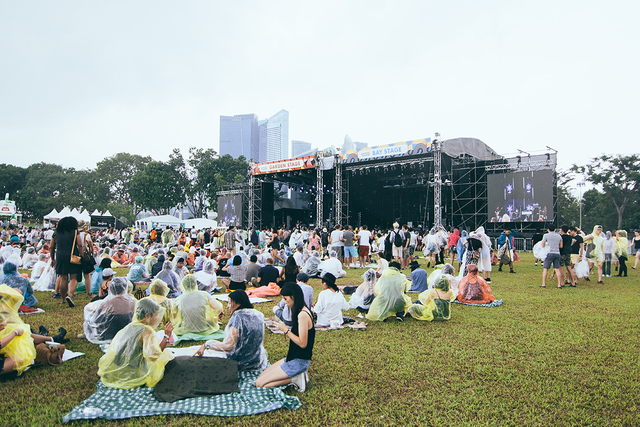 It is possible that this move for "safety and security" reasons could just be Laneway making sure to avoid a Future Music Fest-like situation, in which case it is understandable, but at what cost? There's bound to be festival-goers who will attend Laneway on a tight budget, and may not be able to afford the food offered there, while the number of portaloos to accommodate 12,000 fans would have to be more than sufficient — and, hopefully, not end up with Glastonbury levels of hygiene by nightfall.

The inevitable truth of the matter is that, for the sizeable group of people who will stop attending Laneway in protest, there will still be more willing to shell out the cash for tickets, unfazed by the rule. The Laneway we know now is certainly not the same Laneway we experienced at a muddy Fort Canning Park under rainy weather. Whether that is a good or bad thing is up to you — the additional stages have definitely been a plus (well, almost) — but change is constant. No one wants to keep hearing about how your experience at Fort Canning Park in 2012 "cannot be beat" by Gardens by the Bay.

All of us wouldn't want a Future Music Fest-esque tragedy to befall upon Singapore's premier indie music festival, but it does seem harsh to cut away the one option for fans to escape the (occasionally) punishing humidity, or to scour the area for more wallet-friendly options for sustenance. But with the promoter's efforts to extend the perimeter of the festival grounds, along with areas with air-conditioning and token-less payment methods, the easiest option is to give them a chance this year, especially if you already have a ticket. Because at this point, we can't think of anyone else who would bring in Thundercat or METZ here at all.

The most important thing to take away from this issue is that while angry Facebook comments may not make a difference, you'll have to speak up to get a good experience if you want it. Also, if you're done with this issue, please remember to clean your trash properly when you've had your fun on January 30th.