Where did all the music go? You know, colour-coded stacks of records, mellifluous scripture placating lyrical propaganda, release dates; it’s all been reduced to ashes, thanks to the machine. The machine says you come first. The machine hands you the reigns of the industry and says, ‘be leaders; scourge the catacombs of the Internet and find your own heroes, yet trample on those you deem a trend.

It’s simple, really. You, the listener, decides which artists get to sell records and which artists don’t. The latter will be ushered into a void of self-promotion — a stained-glass display of their entire careers, discographies, home videos even, until we put a number to it. Make no mistake, music is dead — what we have here, is a merciless cult.

Sheffield’s Bring Me The Horizon’s are probably the most hounded victims of this cult. Starting out with 2006’s rakish deathcore offering, Count Your Blessings the boys were measured by worth of their swoopy emo haircuts and the poster boy allure of frontman Oliver Sykes. Thereon, they proved their standing power with a regal infusion of digital glitch and arena sized hardcore - cue Suicide Season and There Is A Hell… - but the machine still yearned for the ‘core.’ The band countered this with 2013’s Sempiternal that traded in their abrasive riff-tank for a more cohesive hard rock emblem.

Bandwagon ascends to the grand entrance of The Hard Rock Coliseum to watch this all unfurl in performance on the Singapore leg of Bring Me The Horizon’s Sempiternal Asia tour. We’re greeted with stone towers that cordon a polarized audience, named here in no particular order as The Veterans of Mosh, The Incandescent Prophets of Hard Rock, The Blue-Eyed Oliver Sykes Fan Club and well, the press. 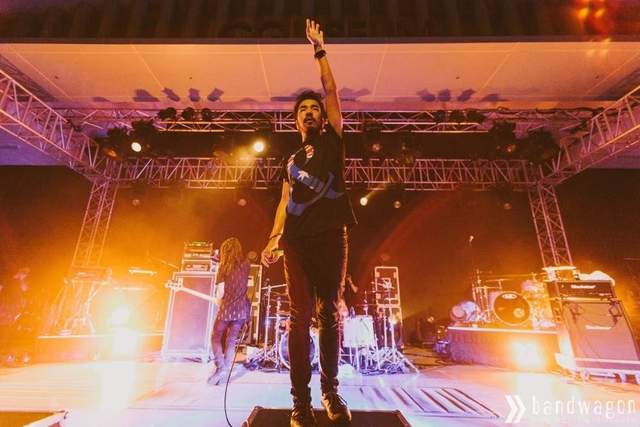 The festivities roll out with Japan’s very own Crossfaith. Kenta and co. deploy their globe-imploding introduction 'Monolith' followed by the southern groove-laden 'Jagerbomb'. But Crossfaith is here to boast evolution. New single “Eclipse“ hints at a radio incursion with tepidly produced disco-pop to balance their otherwise dated metalcore. All said and bellowed, Crossfaith package themselves as a tight ‘modern metal’ act, right down to doing mini versions of the wall of deaths and circle pits BMTH are about to completely obliterate. Their cover of Prodigy’s 'Omen' is cut, extended and stapled with bass drops firmly asserting their breakthrough in 2011.

And then, a chapel-lit silence as Bring Me The Horizon’s tech team lay out their instruments. A tense rumble crashes into the band’s first electronic interlude, courtesy of new recruit Jordan Fish. This seethes, pulsates and pounds into 'Can You Feel My Heart'. Oliver glares from the neon and drops volume every time he belts out a tearjerker: “I’m scared to get close and I hate being alone/ I long for that feeling to not feel at all.” In communion with a sea of raised fists, guitarists Lee Malia and Brendan MacDonald thrash down hard with 'Shadow Moses'. “We live our lives like we’re ready to die… Get up! Let’s f**ing go!” is the calmest reading of the night. 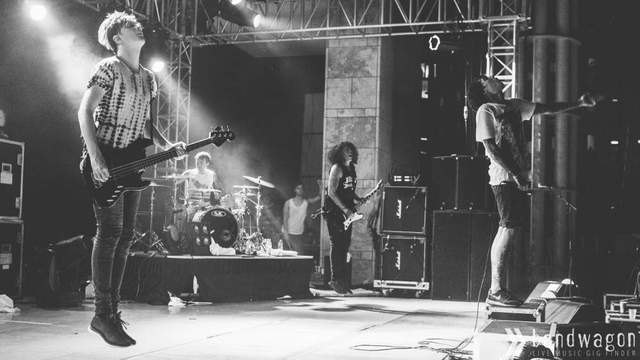 With other keystones like 'House of Wolves' and 'Empire' from Sempiternal set firmly in place, Oliver guides his disciples to the rafters. On 'It Never Ends' the frontman demands participants crowd surf and crash like waves to the front of the stage, only to receive his high-five of approval. The exchange calls for another pounding confession: “I've got a secret, it’s on the tip of my tongue and at the back of my lungs“ — Oliver conducts 'Chelsea Smile' in stunning precision with his bandmates, and also in tribute to openers Crossfaith.

With an impeccable live archetype, Bring Me the Horizon are only flawed for not defying scripture to drop a few Singapore exclusives on the Sempiternal Tour; albeit, the running set does feature a few left-turn gems. 'Deathbeds', an ambient ‘bonus track’ originally penned by Oliver Sykes and his girlfriend Hannah Snowdon, gets a lush rendition live. The relentless, hackneyed screams that build up to 'Diamonds Aren’t Forever' are now replaced with digital dirge until the crowds’ shout outs coax the band to bring the wrath. It’s all in the theatrics that allow Bring Me the Horizon to shine through the gloom of the industry, cult, machine and all.

But when 'Sleepwalking' hits its last note, and all the memorabilia has been dispatched to the true-believers, I’ll have to agree with that last bit of mournful binary— “no Pray for Plagues?!” 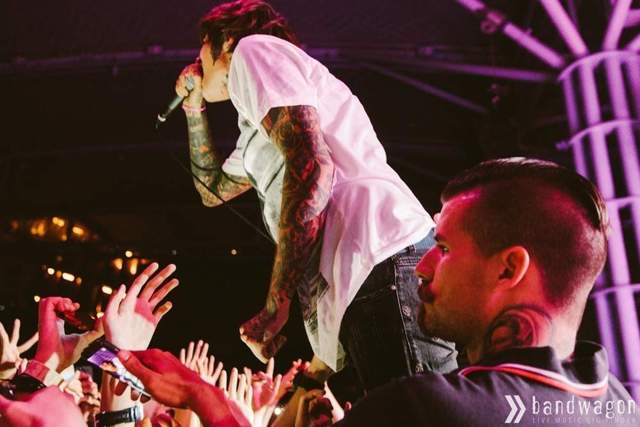