Mark Redito is a fascinating individual.

Formerly known as DJ Spazzkid, the LA based producer has released an EP and a full length thus far, named Promise and Desire respectively. His last release was in 2014 – and his style can best be described as a mix of house and techno, infused with the vividness of J-pop as well as the downtempo goodness of R&B.

As I sat across him at the Papaya Paddling Club on a Tuesday evening, it became clear to me that the man has no airs about him. He's easy-going and personable, and conversations come so naturally that a standard Q&A rhythm just dissipates. He also happens to be a bubble tea aficionado, so we thought there was no better way to interview him than to let him try a dose of what bubble tea Singapore had to offer.

We got down and dirty with the DJ in talking about some of the things in his life that have led to his extremely unique and eclectic DJ sets that always have something for everyone. We found that there are 3 things that get him going: food, anime, and social issues.

Off the back of his trip in Shanghai (where he posted a photo himself eating pig’s brain in a restaurant in Chengdu, pictured below) he playfully acknowledged his astonishing open-mindedness when it came to food.

He explained: “So it’s mostly out of peer pressure. I was in the Szechuan province in China, in Chengdu. They’re known for that. Known for spicy food and using every bit of the animal. They were like – ‘bro you should try this, you should try this’. I like pork. I like fatty rich stuff. Sure, why not. Came out, cooked it for a bit. Oh my god dude. It was mind boggling. It was rich – it was like eating butter.” 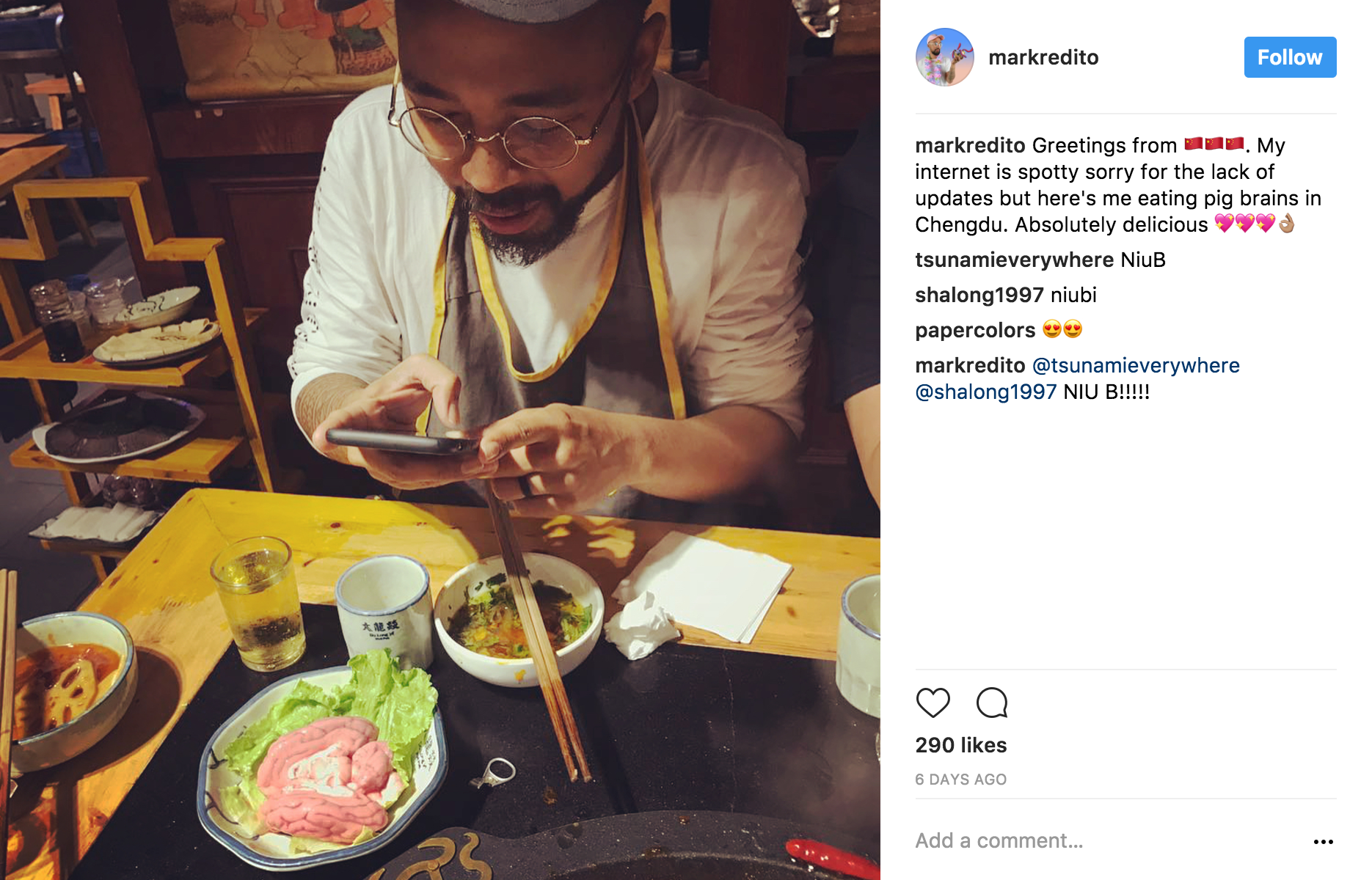 He finds this open mindedness to be generalizable: “I would say I’m a pretty adventurous eater when my friends recommend something. I would be down to try it at least once. I pride myself as somebody who’s very open with food. There’re certain things that I don’t eat? Like lamb. I can’t get over the gaminess for some reason. I like mushy stuff.”

Our team in the Philippines tested him on his favourite Filipino comfort food.

That could be my last meal. That could be the meal that I could eat everyday. It’s weird – some people may think it’s gross. But I love it. It’s nostalgia for me."

But the man keeps it simple if it were just one dish that he could eat for the rest of his life, going back to his Filipino roots, and nostalgia. “If I could only eat one thing for the rest of my life, I would say spam. I grew up in the Philippines and to me, that is a treat. Spam, like fry it. Eggs, and rice. That’s it. That could be my last meal. That could be the meal that I could eat everyday. It’s weird – some people may think it’s gross. But I love it. It’s nostalgia for me.”

After conceding that gamey meat is something he struggles to like, he takes out his phone and guides me through a series of photos of him visiting the Tsukiji fish market in Tokyo, one of which shows him posing next to a ginormous tuna head. He revelled in regaling the experience of trying out the buttery smoothness of fresh salmon, only obtainable in the bowels of the famed fresh fish market.

His visit to Tokyo on tour was more fulfilling than just food. Another open secret is that Mark's quite the anime otaku, barring the characteristic obsessiveness. I asked Mark to explain the whole concept of anime to me, and why it means so much to him. The humble producer cited the unique ability of anime to let every storyline breathe, such that all its characters have a unique set of characteristics, only stopping at broadening the depth of the anime as a whole.

“A lot of these movies are very touching and very emotional," he says. "A lot of it – you can get a sense of the Japanese psyche, the Japanese mindset. I like it because the stories have a lot of space. It’s not like a typical American movie where it’s bam bam bam – there are pauses in between. It’s more introspective. If you’re the type that doesn’t get bored easily, the storytelling is amazing.” 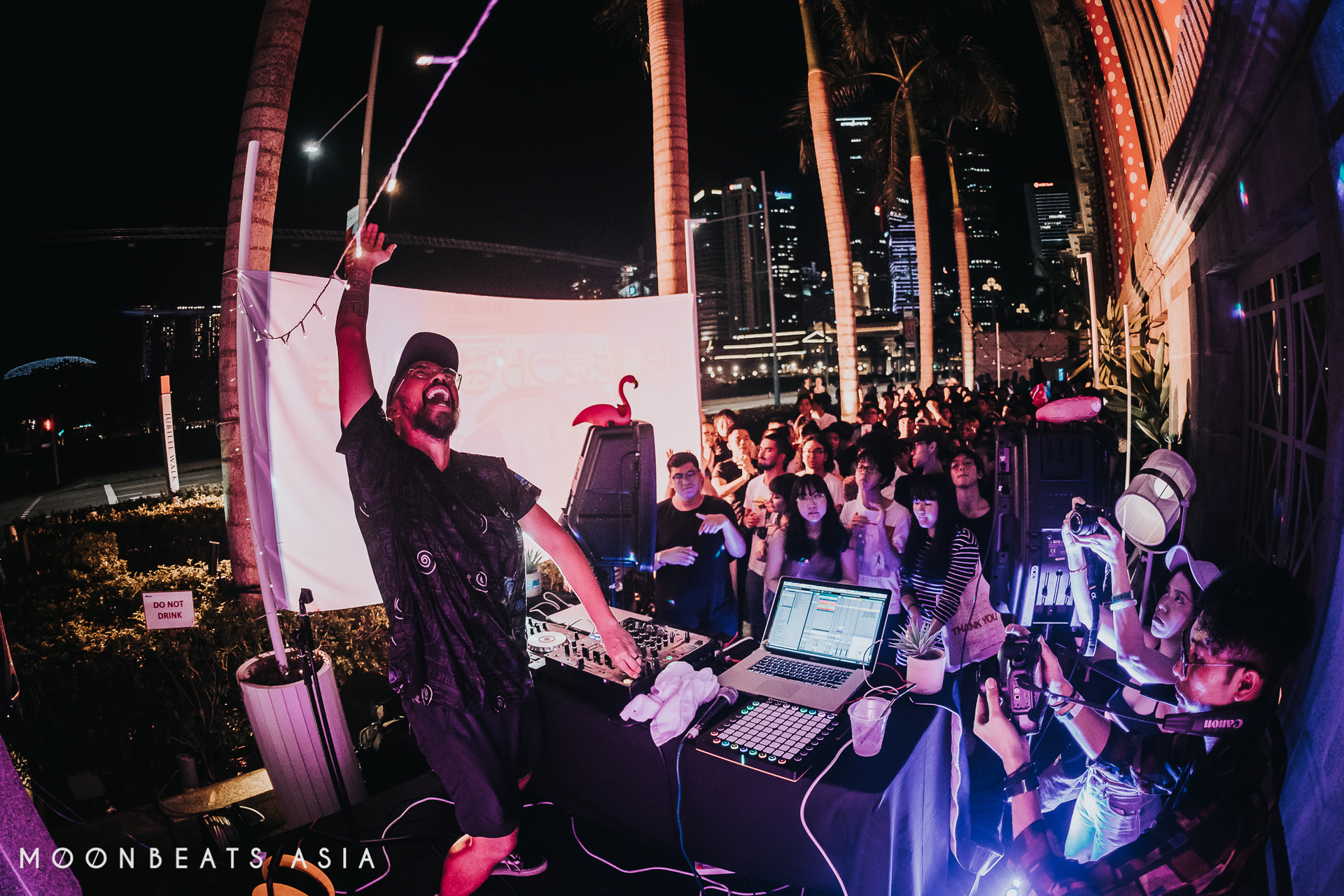 His openness and comfort are belied by the fact that while he recommends his favourite animes for me to watch – Studio Ghibli staples Grave of the Fireflies and Spirited Away – he also asks me for movies to watch if he wanted to get started on Bollywood.

By this point, it was clear to me that Mark Redito was a man who was unapologetically hyper-aware of his cultural roots and the diversity of cultures around him. He’s clearly unafraid to try cool, and sometimes weird, things from countries that he visits — that’s just the type of person he is. The corollary to this hypersensitivity is his keen awareness of race dynamics in the United States of today, which he was all too sad to share about. His voice took on an emotional weight when it moved to that topic.

“Being Asian in America means that you would feel out of place a lot of times, within your community, and within the Asian American community," he says.

"Within the community that you belong, say for myself – Filipino American – it's very complicated. There’re times where you feel "othered". Definitely America – as much as it prides itself on diversity, especially the bigger cities like LA or New York — it still has some issues. I think the whole community is still dealing with that. Racism is an American past. It still exists, although in subtle forms. One example would be representation — especially for artists, musicians. There are not a lot of us in American media. But it’s slowly changing.”

[Racism] still exists, although in subtle forms. One example would be representation — especially for artists, musicians. There are not a lot of us in American media. But it’s slowly changing.”

- Mark Redito on racism in America, as well as increasing minority representation in the media.

This led to a quick exchange over famous Netflix produced TV show Master of None, which features the millennial exploits of Dev, played by stand-up comedian Aziz Ansari. It tracks his explorations of work, life, love, and family — Ansari created an in-depth back story for a minority actor who bucks the trend of minority roles. The show is widely heralded as the first of a variety of shows slowly emerging with such leads.

He also had kind words for North Carolina rapper G Yamazawa (below) – he appreciated him as a person trying to make sense of the complex ethnic spaces people may find themselves in. “I find it very inspiring. G Yamazawa has an interesting background in that he grew up in a place where there’s not a lot of Asians."

He continues: "He’s in this unique spot where he’s Asian American but he draws a lot of inspiration from hip-hop, rap and African-American culture. I think that his voice is really appreciated in the scene. I like his story telling. Definitely hella talented with his flow. Just a big fan.”

His own event series, Likido (below), is Redito's contribution to adding ot the diversity in more ways than one — a pop-up club that plays host to minority DJs and producers, and gives marginalized communities a space to party and be themselves. It’s a part of his long-standing ethos as a DJ, too.

He shares that “In terms of the vibe, I want my music to be sort of a respite from all these things that people carry. Especially growing up in America and as an Asian-American, feelings of being "othered", feelings of being alone. In general, I want my music to be a respite from that. In this particular moment, if you’re playing my music and watching my show, that there’s a place to celebrate and be okay and be yourself.”

This producer is as eclectic as they come. To him, music is not an ethereal, ephemeral experience that lives only as long as the show lasts. To the artist – the musician – music is everywhere.

From the buttery softness of sashimi from Tsukiji market, to the tear-jerking sadness of Grave of the Fireflies, to the uncomfortable unfamiliarity of your ethnic roots, to the sweetness of the bubble tea — which he declared was nothing short of "orgasmic" — music for this individual is rooted everywhere, whether if it's in Los Angeles or the Philippines.

Special thanks to Moonbeats Asia for setting up the interview.