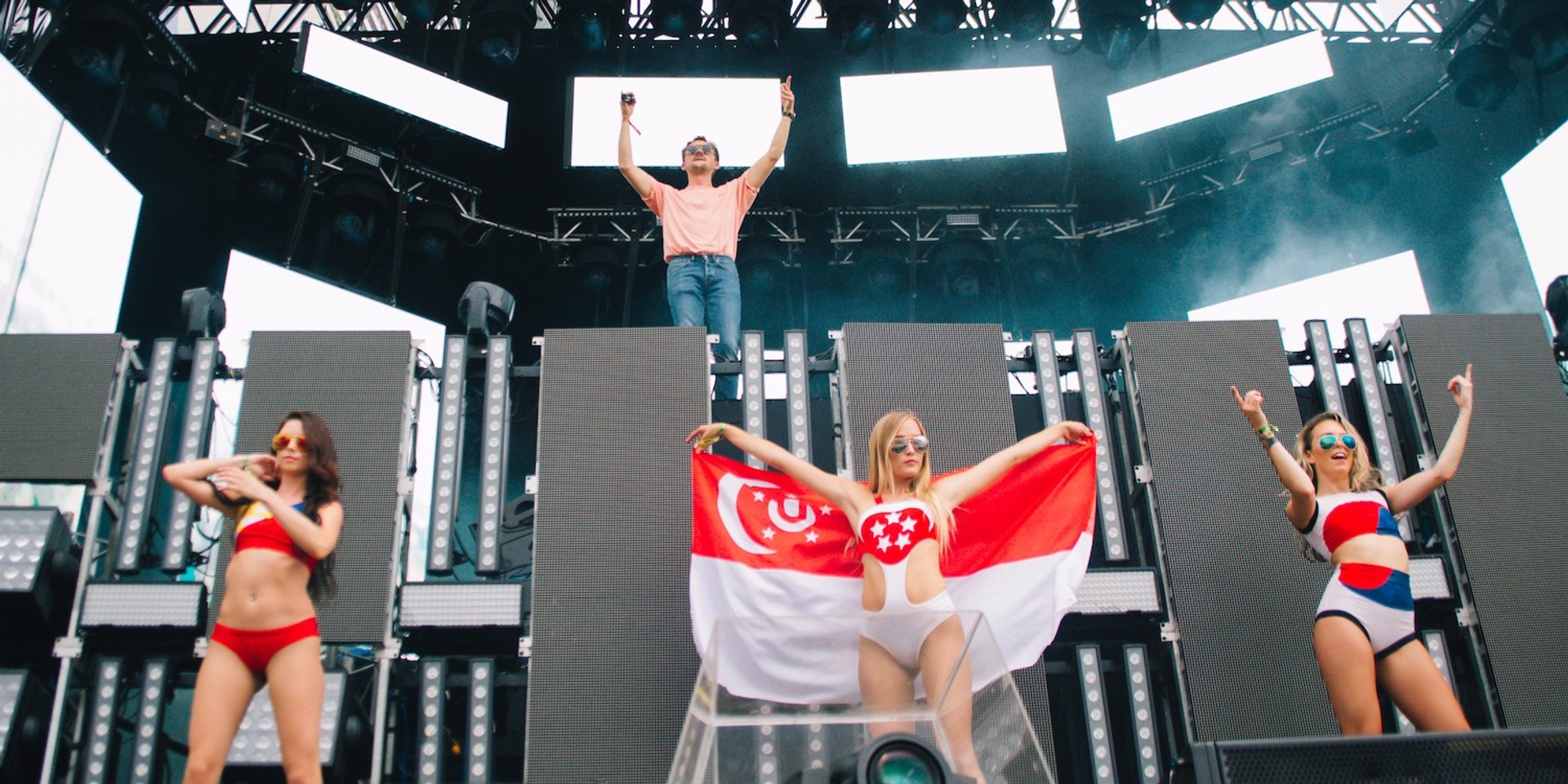 At the 2013 Sundance Festival, Foo Fighters frontman Dave Grohl premiered a documentary titled Sound City, a documentary following the legendary Sound City Studios, lamenting the gradual computerization of music and music production. There is a popular narrative that goes with the prominence of electronic dance music and how it ruins the good name of music made with ‘real’ instruments, the computer of which is not one of them.

But such a surface-level observation has been slowly phased out of music's consciousness, and the full-on display of live acts at the electronic-heavy Ultra Singapore was a clear example of the exuberance that come with electronic music performance.

And that's where we come to Martin Solveig, whose very presence would instantly irk even the most casual rock defenders. Solveig spends most of his sets behind the deck as he does climbing on top of them, and his anything-goes approach to his mixes usually lead to an inexplicably fun outing.

Bandwagon had the chance to sit with Solveig – real name Martin Picandent – before his set at Ultra Singapore 2017 to glean his perspectives on music, performing, and festivals. 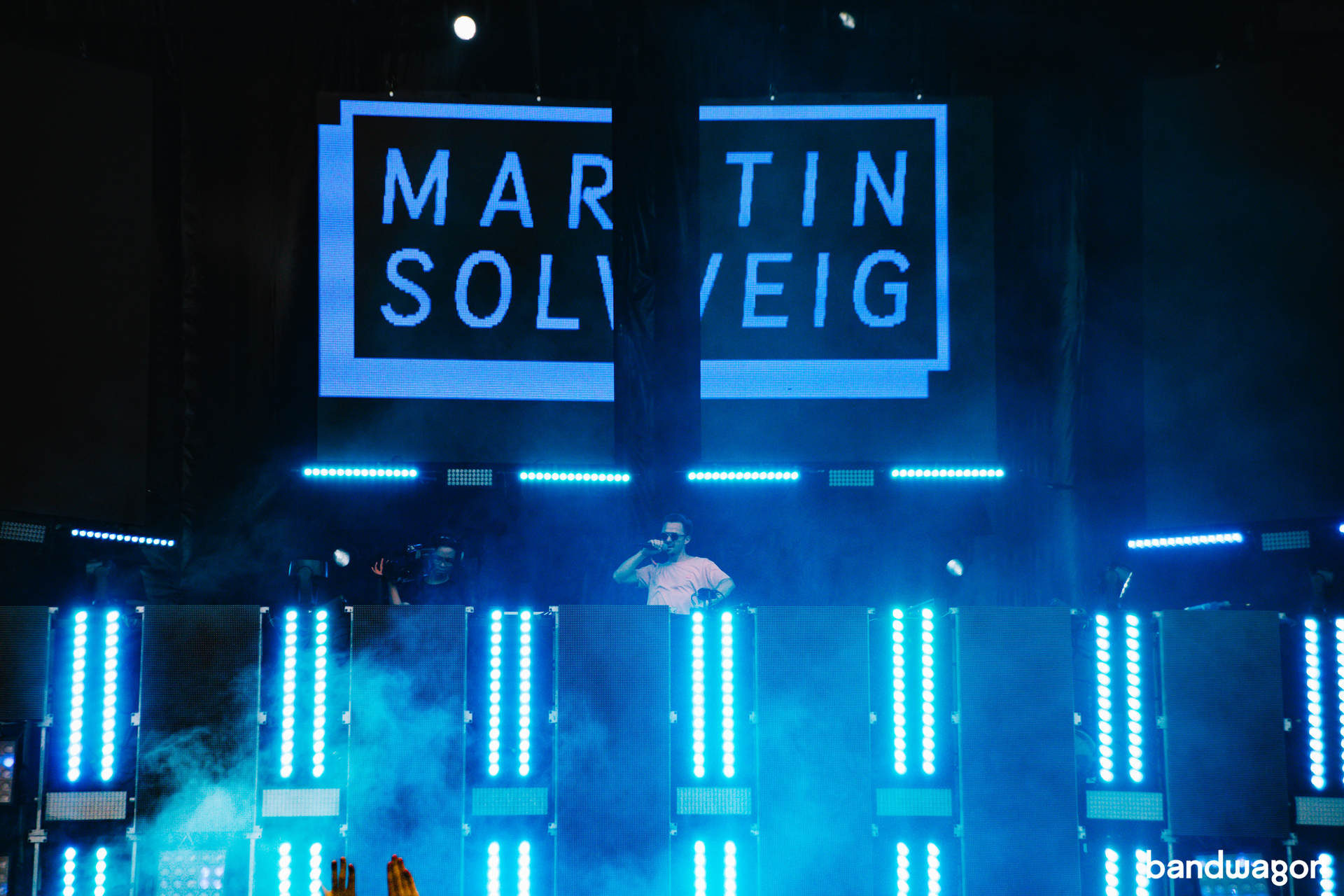 The French DJ is most famously known for his 2010 hit single 'Intoxicated'. Since then, he’s moved from strength to strength, releasing countless singles with a variety of the best in the business. 'Intoxicated', for example, is a collaboration with LA-duo GTA, who played Ultra Singapore on Sunday afternoon.

The unassuming and humble producer has no airs about him. That much was clear as he took a seat opposite me in his dressing room, dressed casually in his pastel pink-coloured shirt and sunglasses, with the sound of Showtek pumping out their afternoon set in the background.

When asked about favourite music, it’s clear that he is a complex man — his love for music being so vast that he felt it unfair to pick his favourite song even from a list of a favourite 100. Compelled to give an answer, he says: "The Strokes' 'Last Night'?" but quickly adds a disclaimer: "I picked one out of maybe a 100. It’s one of my favourite 100, and that’s already a big (thing)."

Perhaps a simpler question to answer – which Solveig thought about intensely before answering: what is his current earworm? Apparently it's 'Don’t Kill My Vibe' by Norwegian singer-songwriter Sigrid. "I’m so happy when I just like the song for no reason, just because when I hear it, I’m happy," he explains. "It’s exactly what it is, to like a song. It’s not because it’s coming from this artist, that’s why I think… this song."

I’m so happy when I just like the song for no reason, just because when I hear it, I’m happy. It’s exactly what it is, to like a song. It’s not because it’s coming from this artist, that’s why I think… this song."

The musician is clear in his love for many genres, the hallmark of a tasteful DJ. Asked about his favourite festival to go to, or play, he confesses that he has a soft spot for the massively popular Coachella festival, a live music institution that has grown from roping in big-time indie favourites as headliners to attracting Beyoncé and Lady Gaga.

Perhaps Solveig summarizes the feeling of being at the festival best: "For not one reason in particular but basically the package: of the spot, the people, the line up, the mix of all genres of music from all styles, from super indie to very mainstream. I think this is always for me something very, very exciting and I’m going almost every year; whether I’m playing or not." 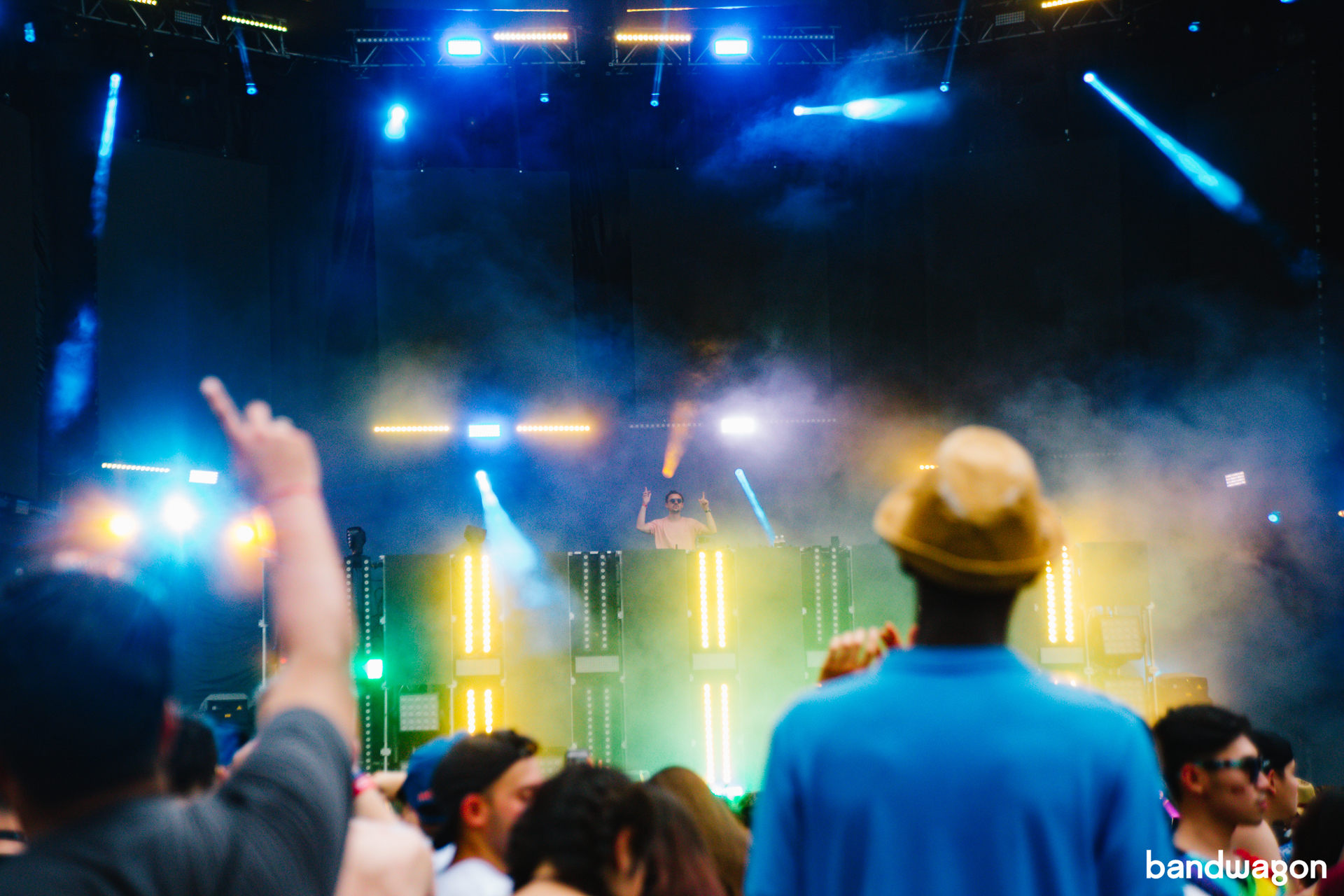 This love for his music is clear as he delivers his live sets.

The prolific performer — he’d just played a show in Hong Kong the night before he was due to play at Marina Bay Sands — is all about giving the audience the best possible experience possible, holding himself to a maxim that he finds the key to delivering a unique set: "One of the things out of this is to avoid playing the exact same song that all the other DJs might play or play. If [the crowd] hears the same song three times, after [that] they’re not too excited about the song or the track."

He explains further: "It’s very difficult because when you engage a 20-30,000+ crowd, they of course need a lot of energy and they also need some song that they know that they can relate to. And that list narrows quickly when the numbers in front of you get bigger. So I do my own versions of everything, of course. Out of the maybe 40 references of songs I will play in today’s show, there’re probably 10 that some other guys may play, but it will be a completely different version."

We don’t have to look far to see this strategy in action: in his Ultra Miami set (above, at the 26:12 mark), Solveig mixed the immensely popular old school hip-hop 'Drop It Like It’s Hot' by rap luminary Snoop Dogg with 'Starboy' by eminent R&B star The Weeknd. Something for the old, something for the new, mixed in a characteristically Solveig fashion.

His performance at Ultra Singapore was another testament to this DJ’s style: he brought out Ed Sheeran’s chart topper Shape of You – something that was played exactly four times by different DJs through the weekend – and made it unmistakably Solveig by slowing it down and mixing it into a pure techno jam. 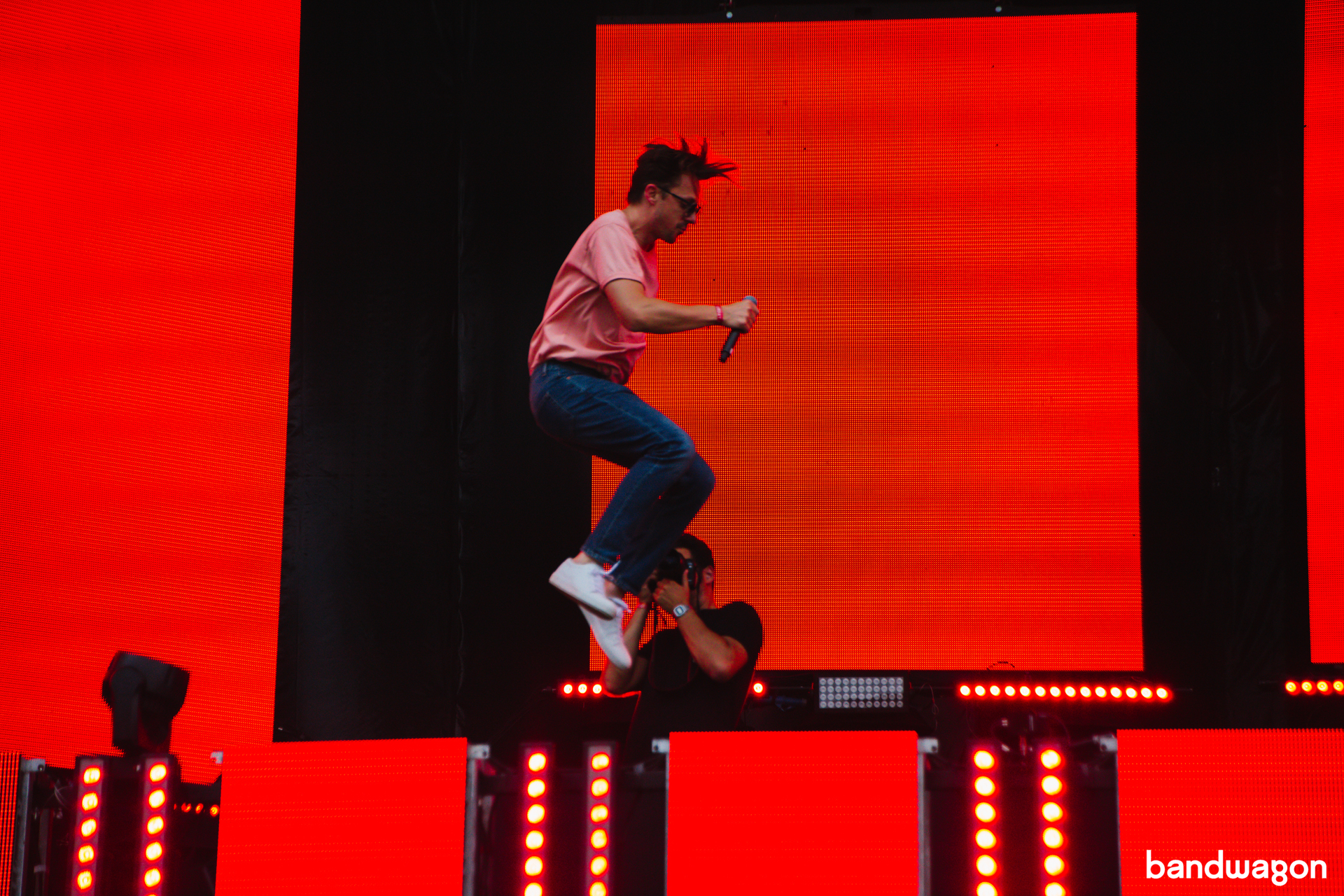 His crowd interaction wasn't shoddy either – the DJ, whose voice was peppered with fatigue in the dressing room, was a different man on the main stage. Solveig cherishes each moment engaging the crowd, and the moments of issued clarity, purely by the audience response, energizes him further into his set. Jumping from the top of his deck is routine, but his enthusiasm is forever refreshing.

With the chaos that comes with his live shows, Solveig puts it succinctly when asked to describe his craft: "Music is my life, obviously."

Solveig is by no means the only DJ who is worthy of recognition for the insane amount of hard work that goes into curating songs and mixing a festival-worthy track that gets today’s highly demanding festival crowd to turn up: what happened at Ultra Singapore 2017 is a testament to that.

More importantly, Solveig also breaks down the oft-stated understanding by most people of what DJs do at festivals: pressing the play button and asking everyone to put their hands up. It's not novel, and it may not reach the heights of guitar artistry — but when done right, it's shamelessly fun.