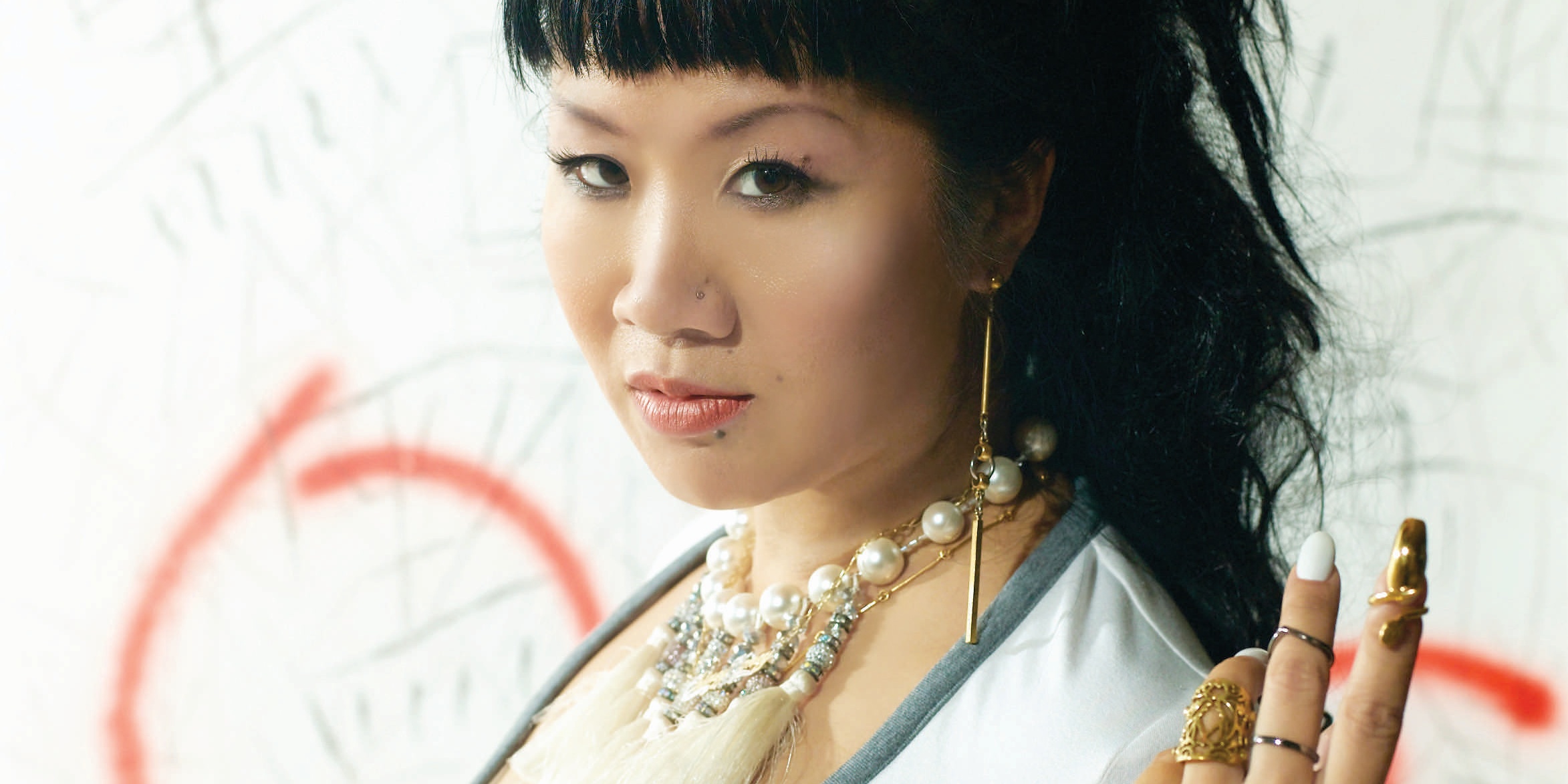 A lot has changed since MAS1A (aka Masia One) burst onto the scene in the early 2000s championing dancehall and reggae, scooping up award nominations (like when she became the first woman and Asian to be nominated for a Much Music Canada award in the rap category) and landing collaborations with the likes of RZA and Pharrell.

For one, the globetrotting artist has settled back into life and work in Southeast Asia, playing shows in Singapore (you might have seen her at Laneway Festival in January, or at Singapura Dub Club, which she runs) and the region at large. The genres MAS1A has dedicated her life to have also globalised in an unprecedented way, with rappers emerging from every cultural corner and mainstream artists incorporating island sounds like dancehall into their music.

Before she takes the stage at Sing Jazz, we caught up with MAS1A about her music-making experiences around the world, being back in Southeast Asia, cultural appropriation, and her long-gestating forthcoming album, Empress From the Far Eastside.

You first fell in love with hip hop via a Public Enemy cassette at the age of 8, and you’ve made your name as a champion of reggae in Asia and beyond. What about reggae – its music, its lifestyle and culture – spoke to you at the beginning?

Hip-hop has always been my first love and in fact emerged from Reggae’s sound system culture - they have the same root. Hip-hop makes me feel brave and outspoken. Reggae is a very spiritual tempo for me that inspires reflection, celebration and appreciation for life. This is my sonic ying-yang.

You grew up in Singapore and Canada, and have travelled to Jamaica and all around the globe. When you look back on your cultural roadmap, what experiences stand out as the most formative?

The opportunity to work with producer G.O.O.D. Music producer, Che Vicious, allowed me to collaborate and write with my Hip-hop heroes such as RZA (Wutang), Talib Kweli and Pharrell. I remember when I first came to his studio, the Grammy plaques for his production on The Miseducation of Lauryn Hill hung on the wall and it was a wonderful source of inspiration for me. It inspired self-reflection, that I had come far, from a Hip-hop fan, to artist, to a working contemporary of my Rap heroes.

The other experience that stands out for me is performing in Jamaica. When it’s showtime in Jamrock, if they like you as an artist they light fires across the crowd.  As an artist there’s no greater feeling than to watch flames light up above the crowds.

You’ve been back in Singapore for a while – one of your bigger shows in recent memory was at Laneway Festival 2018. How’s it like being back in Asia? Have you had to adjust the way you do business or make music?

Coming back to Singapore was a huge culture shock for me, but I quickly found myself falling in love with the music, diversity and culture of the whole region of Southeast Asia. I’ve been able to collaborate with such a diverse lot of musicians from Indonesian percussion bands that play traditional Javanese Instruments, Vietnamese emcees rapping in their native dialects, Cambodian dancehall artists, Malaysian ska bands…etc. Not long ago I collaborated with Singapore icon Clement Chow and had him sing some [of] Drake’s ‘Hotline Bling’! With these new cultural experiences, the inspiration is endless. I have a passion to show how amazing SE Asia is to the world and specifically to break stereotypes of Singapore to an international audience.

As for business, developing new musical and cultural scenes in Singapore is difficult and not always an immediate return on investment. Making money is great, but I consciously decided to invest time and efforts into something like the Singapura Dub Club (Island and Reggae events) because long lasting legacy, positive messages and new experiences that may change lives, grow the scene or allow the region to tour is a more valuable endeavour for me. After three years of pushing, a scene for Reggae and Dancehall is successfully growing vibrant in Singapore and the region.

Dancehall and hip-hop have globalised in a huge way in recent years, from the emergence of tropical house to the likes of Iggy Azalea et al and even the phenomenon that is 88rising, sparking conversations about cultural appropriation. As an Asian woman who’s been championing reggae, dancehall and dub for many years now, have you been involved any such conversations of late? You’ve talked before about how when you first tried to champion reggae in Singapore, you were met with many racist responses. Are things different now?

I think it’s more dishonest to take someone’s music and cultural experience and name it something else. Call it what it is. For example, Tropical House is Dancehall music. Rebranding it as something else is problematic as it cuts off the style from its heritage, history and root of its inspiration.  Why does Hip-hop, Reggae and Dancehall resonate so well internationally? Because it comes from a place of struggle and oppression and transforms it to triumph and knowledge of self and taking on a larger than life character. Imagine if every artist that wears Hip-hop fashion, learned the history of Hip-hop - what depth and longevity would that add to their music?

I’ve been told by the music industry figures in Singapore not to be affiliated or branded to Reggae in Asia because it has bad associations, not expensive and has a stereotype of Bob Marley cover songs. I learned from the time I was the only female Chinese rapper in Canada, called racist and sexist names and told Chinese girls can’t rap that it’s the same thing: People are afraid of what they don’t know, it’s hard to pioneer movements, it’s a challenge to be brave and stick to your authentic art and sound when everyone is telling you to do the opposite. When I was told not to rap, I did and changed a lot of perceptions in North America for the better. I am now told not to do Reggae, yet I know in my heart this message and music is authentic to my heart and shares a positivity to Singapore!  As an artist, I have to be me. As the saying goes, it’s bigger than Hip-hop. If I’m lucky maybe the perspective can change.

Anyone who follows you on social media knows how excited you are to see Ms. Lauryn Hill at Sing Jazz. Can you speak a little on her influence on you? Who else are you excited to see?

I’m so blessed to have my musical journey come full circle from pinning up a poster of Lauryn Hill on my wall as a kid, to getting a fake ID to sneak into a Fugees concert in high school, to working with one of the producers of The Miseducation of Lauryn Hill, to meeting her last year in New York after her amazing performance - and now sharing the stage with Ms. Hill at SING JAZZ 2018? Thank you SING JAZZ and thank you Singapore.

I resonate so much with this artist because she always stayed true to her voice, always kept her lyrics positive to help people and not to champion materialistic and destructive behaviour. When she grew tired of the music industry and reconnected with herself spiritually her music became more influenced by Reggae and Jamaican culture… oh yeah, and she also is the mother to five Marley Royalty kids.

We’ve heard you’re working on a new album. What’s the story there? Will fans get to hear anything soon?

The new album is almost done and called Empress from the Far Eastside.

I’m working with Richie Beretta, who engineers and remixes many of Major Lazer’s tracks. This album has collaborations with my favourite artists in SE Asia to the world including Vietnamese emcee Suboi, Indonesian soul and ska singer Denny Frus and Tokyo future ragga producers Part 2 Style! I’m shooting a video this month with a CRAZY concept that aims to change the stereotype of Singaporean women and you’ll be hearing and seeing it in 2018. Before then, a collaboration I did with Singapore's Perk Pietrek should be coming to a speaker near you real soon.

MAS1A will be performing on Saturday, 7 April at the Late Show at Sing Jazz 2018. Tickets are available here.