At the center of stage, a dark-aged oak wood poppet stood out like a tree in a futuristic desert-esque stage – littered with vintage synthesizers, pristine Marshall amps and well-polished guitars. The juxtaposition on set mirrored the band’s soulful indie rock roots’ mixed marriage with new wave synth sound. This was Metric’s maiden performance at the Esplanade Theatre, their fifth album to date, showcased to a sold-out auditorium.

Nurtured in Williamstown, New York, the former flatmates of the Yeah Yeah Yeahs, Liars and TV on Radio, rode their mixed marriage of rock and synth out of the miserable conditions of their loft when they signed with Chrysalis Records in 2000. 12 years on, the death of alternative, rock and electric guitar rifts, the group’s current success is a far cry from the struggle that plagued the Toronto-formed, New York-nurtured band’s first album release in 2003, where keyboards floundered and Telecasters thrived. 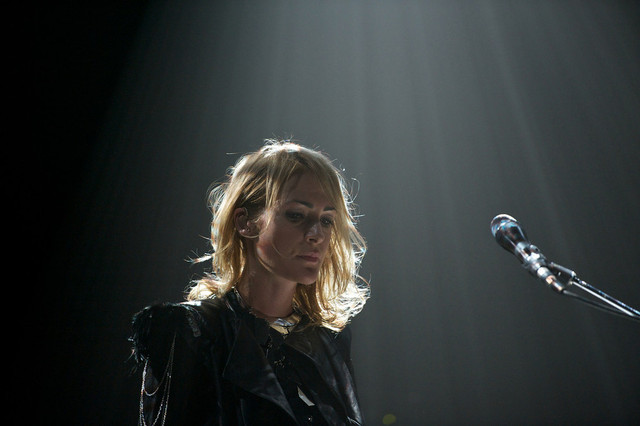 The set begun with ‘Artificial Nocturne’ and ‘Youth without Youth.’ The lyrics, a questioning of pop culture and its role in responding to the crisis of political and personal identity, pretty deep stuff for an electro indie band. At a sold-out concert.

And as I scanned the crowd, I would say she’s got it right. The audience, consisting of the electronica-listening, indie garb-wearing, iPhone-gig-filming generation, were probably faced with the same issues of identity and social activism (maybe not so much here). Which makes the vitriol and passion in Synthetica, another anthemic offering from the band.

Like a musical weave without any knots, the band’s superglue-like cohesion knitted a harmonic resonance that was pulsating at times and on other occasions, a rhythmic backdrop to Hynes’ sex kitten-like dance moves.

The well-dressed stage, the ordered set list and the almost immaculate fashion relevance of the group’s performance shimmered. Haines who embodies the art of a charismatic show-woman with the sensibilities of a rock chick who knows the power of aesthetics and isn’t afraid to wield it to enhance the dynamic between artist and audience. Simply put, she looks great, and is fearless to use it. 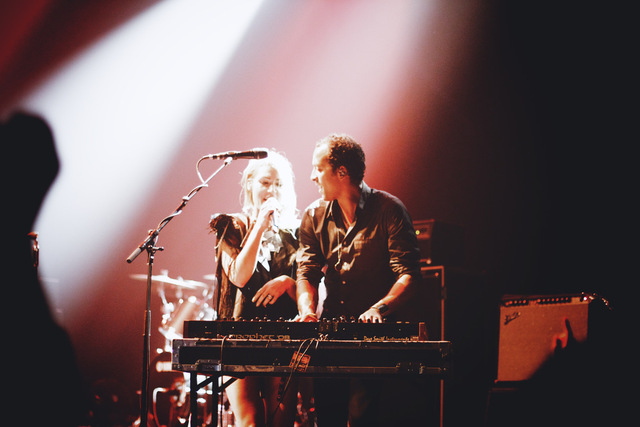 Musical precision carried its way across favorites like ‘Gold Gun Girls’ and ‘Help, I’m Alive’, as the band delivered what was expected and more: danceable pop-rock with synths and guitars gilded on the wings of a rock angel in singer Emily Haines.

It would take more than beat and synth to propel the band forward but hard to ignore was the beautiful symmetry of introspection shared between band and audience that made what Metric had to say a revelation to a completely new youthful breed of audience.

The band offered a silver lining in an inspired end to the evening with a heartfelt tribute to dreams and what 10 years of playing together has helped them see past the struggles and in as cliché as it may seem as Haines would put it, to always “follow your dreams”.