Words by Ilyas Sholihyn
MONSTER CAT should already be a household name by now, if your household were to be musically inclined towards the local music scene. Playing a uniquely organic brand of sound (an intricate mix of folk, experimental and indie rock - alternative folk, if you must label it), their debut EP Mannequins was released in April last year to considerable critical acclaim from various magazines, blogs and newspapers.

Already part of KittyWu Record’s wonderful roster of innovative bands, they went on a tour in Japan last year in December and went on to perform here in The People’s Party in January and more recently in the Music Matters Live 2012, the climax to the highly regarded conference with influential speakers such as Mike Bebel (Global Head of Music, Nokia) , Martin Elbourne (Talent Booker, Glastonbury Festival) and Bob Ezrin (Celebrated music producer, worked directly with Pink Floyd, KISS, Nine Inch Nails, Lou Reed, Deftones and many others). Bob Ezrin was certainly impressed by MONSTER CAT’s performance that night.

In a sort of anniversary for the release of Mannequins, MONSTER CAT made the (awesome) decision to put up their EP for free download on The Pirate Bay torrent site - a move that proved to be an effective strategy in accumulating attention and new fans from all over the world.

Considering their exponential rise into prominence in the Singapore music scene, how has MONSTER CAT coped with all that buzz in such a short period of time? This week we catch up with them as they talk about their success, file-sharing, Bob Ezrin and Japan’s epic ramen.

2012 has been a hectic year so far. You've played some pretty big exposure gigs, you've appeared on MTV Asia, put up your debut EP for free on The Pirate Bay - and that's not even half the list of stuff you guys have done this year. How are you guys holding up?

It's just the beginning for us. There's still loads of things we wanna work on - more overseas tours, more shows, new collaborations, a new merch line and of course our full-length album. We've always seen MONSTER CAT as more than just a band, and our decisions will hopefully reflect that. To be honest, these are just baby steps. There's still so much blood and sweat to put in, for us to be anywhere near where we want to be.

For a new band, you've certainly been getting massive amounts of attention from the media, both here and overseas. Did you expect all of this to happen so fast?

Well, we don't really focus on the expectations. We just keep working at it. For the Mannequins album, we were simply determined to put out something solid, all killer no filler and to keep harnessing our live performance standards. From the website to the CD design, we focused on creating a strong visual identity that would enhance a listener's experience of our music.

As for The Pirate Bay promo, it really helped us garner an overseas fan base. It led to interviews with a prominent German lifestyle mag (Max.de) and even airplays on UK and South African radio stations. Our music video for "Underwater" (done by film collective RAAPOW), also shot up wildly in terms of view count. Kudos too, to the various newspapers and magazines (JUICE, Nylon, Life!, Business Times, etc) here who saw the value in what we were doing, and picked up on us. We'd say that we're proud of what we've put out and we’re glad that the media has taken notice.

It's been almost a year since Mannequins was released. How has the response and support been since then?

The response has been a whole, very positive and encouraging. It was an honour to be named one of JUICE magazine's Top Local Releases of 2011 and get cool reviews on various music blogs worldwide. We've met a lot of listeners at our live shows and really enjoyed talking to them about music in general. It's a completely humbling experience to get a shot at doing what you love and have people reciprocate it. We guess it's a sign that we're doing something right if artists from various fields (musicians, filmmakers, illustrators, fashion designers) are keen to collaborate with us.

Anything you wished you could have done differently?

Maybe, we wished the band had met earlier and got right into the thick of things a decade ago, haha. But you know, everything happens for a reason. Every failure, every incident, every detail is meant to get you where you're supposed to be.

You toured Japan last year in December to promote your music, which must have been awesome. Why Japan though? (other than going back to your roots of Bakeneko) 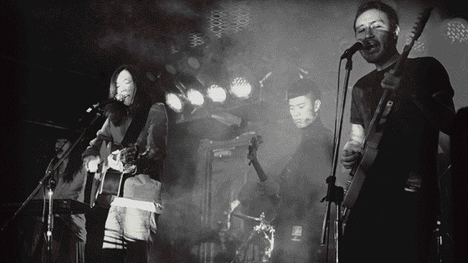 If there's any Asian country closest to the West in terms of genre range, local support, performance and production level, it has to be Japan. The number of killer bands (with the potential to 'make it' on a global scale) is astounding. On any given night, there is a musician on a stage who literally BRINGS IT. Be it an audience of 1 or 1000.

The one thing that struck us most has to be the professionalism. The way the venues conducted meticulous sound checks, the way they had a designated room for artists to get ready, the way they gave the concept of a 'live show' so much respect. It didn't matter if the venue was huge or small. On a musician's level, we saw these bands that dressed up for shows, had such a high level of technicality and performed, really performed as if it was their last night on earth. It was a shock to the system for us. We began to truly realize what it meant to be a musician. To have a respect for your own craft, to respect the audience, and to bring it - day in day out.

Also, we travelled to Japan with our lighting artist and had a swell time doing building-sized visual projections from our hostel balcony. We did kind of disturb the peace there, to put it nicely. Oh, and we played a spontaneous acoustic show in a forest/park for the locals. That was awesome. You can watch these videos on our youtube channel, monstercatmusic.

Your decision to post up your EP on The Pirate Bay was a pretty bold move, something most bands would never dream of doing. What lead to that decision and what were you hoping to achieve by doing that? 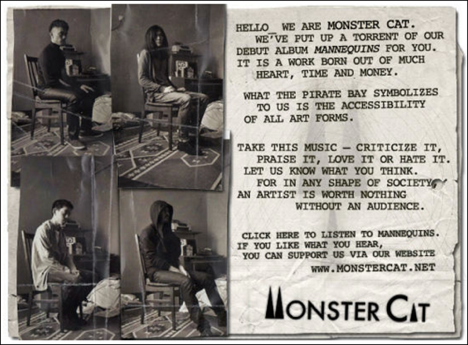 File-sharing is a reality that involves millions of users every day. These consumer habits are here to stay, and it forces all denominations of the music industry —artists, fans, labels, distributors, and gig organizers — to re-examine how music is created, shared and enjoyed. These are the consumer habits of today and we feel that it’s a situation that has no straightforward answers and one that calls for creative, unexpected solutions rather than the use of moral force or the law to protect a status quo. In a way, we wanted to make a statement that music should head back in the direction where power belongs to the listeners and fans.

The response was overwhelming. We were getting Facebook messages, Youtube comments, tweets and emails almost non-stop over the 3 days. The majority of the comments we received were very positive. We got around 150,000 unique hits over the 3-day period (most of whom we think would have downloaded the album), from 198 different countries.

We got messages from all over the world, from Brazil to Finland to Iran to India, telling us that we were doing the right thing with The Pirate Bay promotion and that they enjoyed our album. Given the comments from listeners, it was evident that they really appreciated our move to make our music free for download. In fact, it was a huge driving force for them to click on us and even make an eventual purchase.

You captured the attention of legendary producer Bob Ezrin with your performance in the recent Music Matters conference, and even created a bit of commotion on Twitterspace with #FINDBOB. Tell us more about that incident.

Well, we missed what he said during the conference because we had to rush off for our soundcheck. Haha. Apparently, he really liked our music and was annoyed he couldn't find our email off the Mannequins CD to get in touch with us. LOL. So we've been trying to contact him, to #FINDBOB. For f***'s sake, he produced Pink Floyd's The Wall, Kiss' Destroyer and loads of Alice Cooper albums. So he's a bit of a celestial being, musically. It's a real honour to get a shout-out from him and hopefully we'll be able to carry on the conversation with him about our music and maybe future productions.

Is MONSTER CAT working on some new material? What are your future plans in regards to your music and touring?

Definitely. We're hard at work on our full-length album, which will be composed entirely of new songs. We're toiling to take our songwriting and performances to the next level. Tour-wise, we may have a few big ones coming near year's end, so we'll see. We're also looking to play Germany's Reeperbahn's festival organised by Music Services Asia. It will be a kickass experience so please vote for us! We're running a Twitter contest where you can win an exclusive new merch line if you help us out, just head down to our Facebook page for more. We will run naked around the Berlin wall. Danke.