On several levels, Indonesia seems streets ahead. Not including the traffic and smog, culture, arts, and music. One of which is the vibrantly coloured and sounding White Shoes & The Couples Company, and boy were we glad to hear that they're coming back to Singapore for Mosaic Music Festival. We talk to the band on their beginnings, career highlights and the underground music scene in Indonesia.

Hi White Shoes! Good to have you back in Singapore! The past few years have been quite exciting for you guys – working with Vincent Moon, touring in Europe, a couple of big scale shows – how has the journey been so far?

Ricky: Well, yes, definitely it’s been a busy year for us. After we released Album Vakansi in October 2010, we’ve been performed a lot (like 6 to 7 times per month) and also work in many projects that involved our music.  That’s makes us should work more creative, not only in terms of doing our music performances on stage, but in other way like how we manage to struggled until today. We make new friends, build new networks, and learn to manage our performances in different situations. The journey so far is fantastic and we are having fun with what we’re doing.

What are some of the highlights in your career?

Saleh: Being invited to play in some festivals in other countries with different language, weather and also culture is a great achievement for us. Released our first album with Minty Fresh in the US in 2007, and then followed by performances at SXSW (Austin) and CMJ (New York) in 2008.

Other highlights for the band was the experience to perform with two of Indonesia's living legends from the 70s and 80s: Mr. Oele Pattiselano (jazz guitarist) and Mr. Fariz RM (drummer, keyboardist). We collaborated to perform on stage with both of them, and we continued to collaborate with them to record two songs for the album, Album Vakansi, in 2010.

How much has the Indonesian music scene changed since you first started?

Rio: The music scene is growing in a healthy way, of course this is the side stream that I’m talking about. It builds new culture, grows wider, and got strong appreciation from the public. Like nowadays, as we all know, with the help of technology, many bands can recorded their music easily, and spread them on internet. There is no need to have a record deal to distribute your music to public, and that’s change the way people find new music. Indonesia has a big music market, as the population is now more than 200 million people. If your music could reach just 2% of the population, that’s already a good start to make a living from music, and this condition could attract more talented artist/musician to work in this field. I think that’s pretty important. The music scene nowadays also helps other creative fields to grow such as fashion, the art community, film and specially the youth culture.

In the underground music scene, we have such a variety of sounds in Indonesia, and they are so good. I believe if we can work harder, have more courage, more self confidence, a good marketing team, and of course more opportunity to showcase them outside Indonesia, it will be massive. 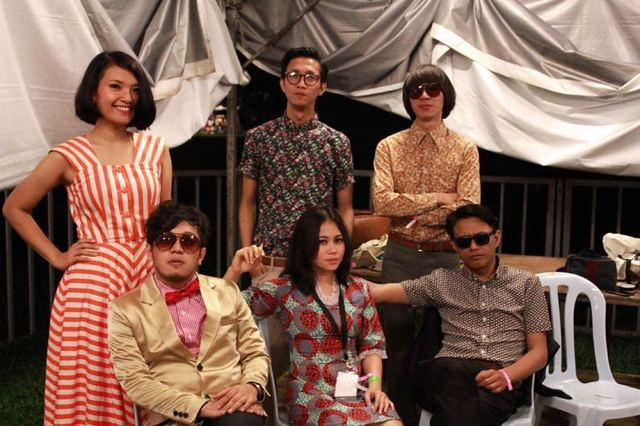 Has it always been in your plans to have a big band?

Ricky: No, at first, we just wanted to have fun with this band. We formed the band to play at an event in our campus. We create music and sound that we like, then we recorded our 1st album just for our own documentation (so in the future when we have a grandchild, they'll know that their grandpa was in such an eclectic band hahaha…)

Your music is very distinct and you sing about all sorts of things nostalgic, why tap into nostalgia?

Sari: We are inspired by 60s and 70s sound, especially we are fascinated by Indonesian music soundtrack from that era. After that we keep find many Indonesian music that’s came out from that times are really great. We think that era is the golden era of Indonesian music. From there, we’re trying to capture that golden era in our music, play it with our arrangements, mix it with other influences and have fun with them. The nostalgic feeling is something that already captured inside the tunes. It’s the atmosphere and a trace from the past that you can’t avoid, even when you play it with new technology or new style. It’s the aesthetic of the music. Somehow you will find this nostalgic thing is a way to transform different feeling of the sound. And when we play it, it’s a good therapy for us, reminiscing good moments, and turn them into some danceable songs. It makes us feel good when we play them, and we like to share them to many listeners and audience, simply just spreading the good and friendly vibes.

You guys definitely have a look going on which you have maintained quite consistently – how did this idea begin?

Rio: First, we are all study in the art school before, and makes art is our daily job. We used to it, that’s why we need to create an identity that comes out from our music. The outfit and all visual that we created, they all meant to sharpen the music’s image. The harmony of music and visual, that’s what is all about. The cover sleeve, merchandise, posters, artworks and everything that we created along the music we think about it carefully. And on stage, it’s an audio visual package. The music comes first, the look follows. Both of them should be related and equal.

What do you listen to? Who/what are some of your influences?

First, we got influenced by soundtrack from Indonesian movies in the 50’s - 70’s, it’s like the golden era of Indonesian music and have great musicians behind the film.

How are you preparing for your show in Singapore?

Mela: We have prepared two different sets for the show in Mosaic. First set will be an acoustic set, and second set is a full electric set with high energy. We’ll definitely give a fun and happy show!

The best audience is:

John: Arrives on time to the venue with nice outfits and good attitude.