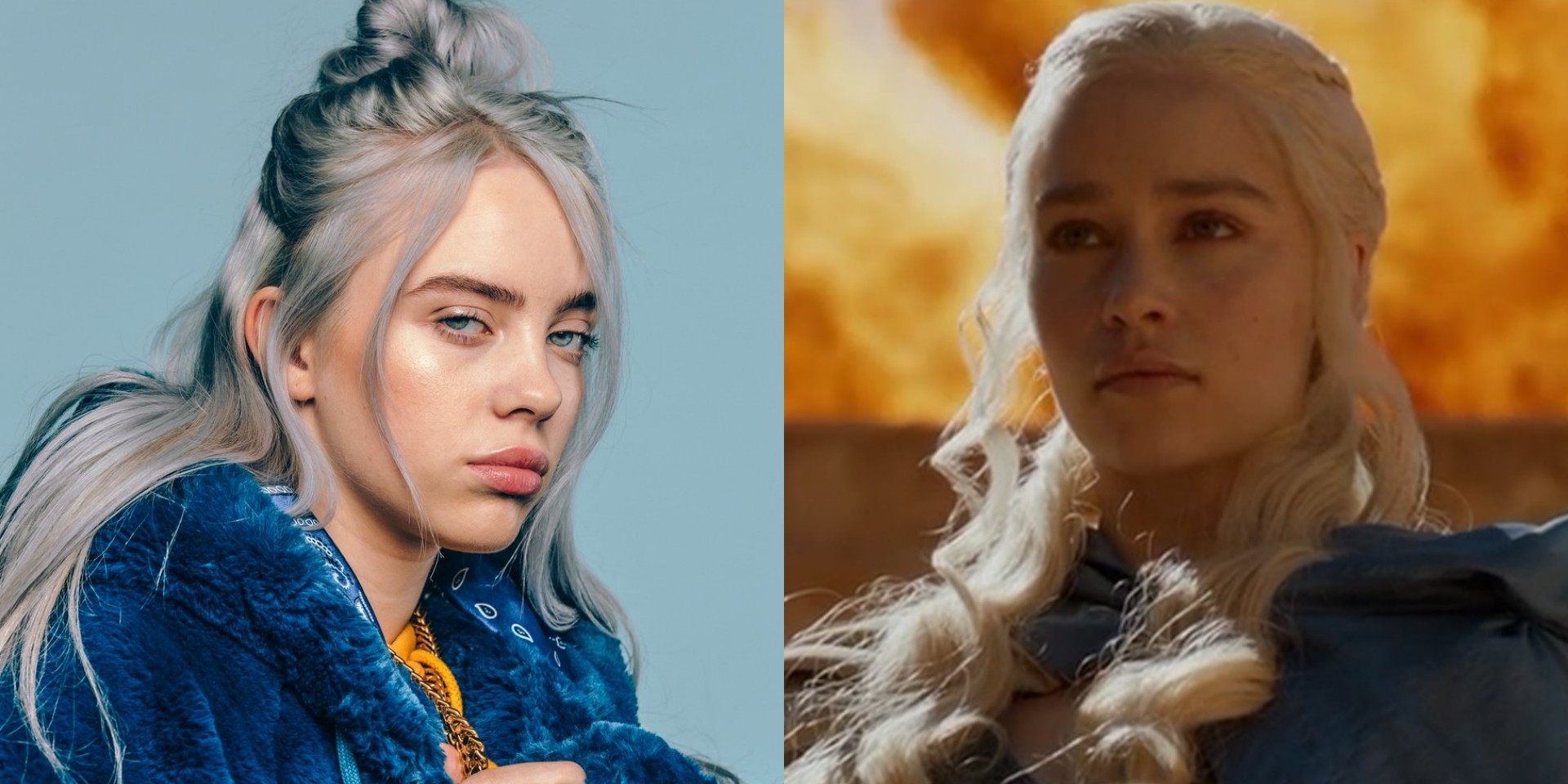 Yes, you read that right. With the Season 8 premiere of the HBO hit show, it's safe to say that the phenomenon that is Game Of Thrones has brought the universe together to celebrate David Benioff and D.B. Weiss’ masterpiece. For the past eight years, the audience has lived through the comings and dyings of the show’s memorable characters.

In the arena of music, the survival of the fittest is also paramount to the relevance of the musicians that inhabit its various kingdoms. So, in the spirit of art imitating life (and vice versa), we bring you 15 musicians and their counterparts from the Game of Thrones. 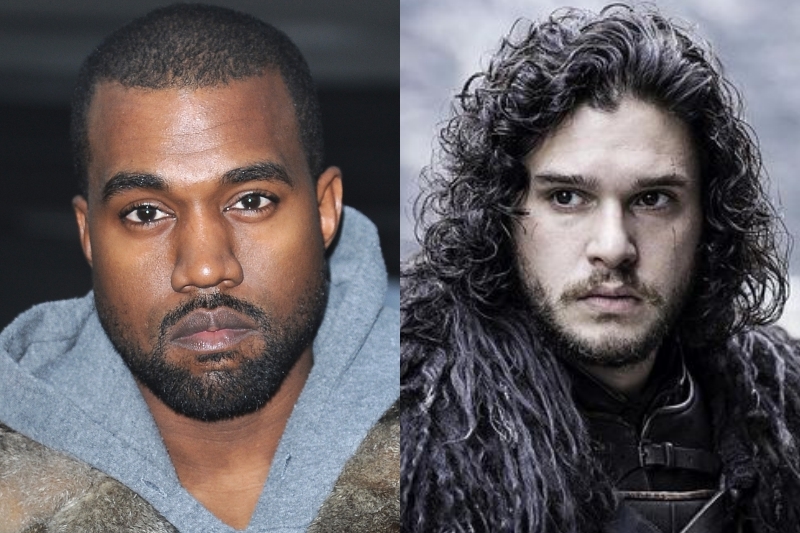 Jon is described by the show’s creators to be one that “face[s] hard truths about the world they live in, and adapt themselves to those truths,” and the same can be said for Kanye West. Years of controversy have shaped Kanye into the icon he is today; he is, as, if not, more polarising than the Thrones character.

When Kanye’s 2009 fiasco with Taylor Swift at the MTV Video Music Awards went down, he was, in today’s terms, cancelled. But with his 2010 record ‘My Beautiful Dark Twisted Fantasy’, Kanye more than redeemed himself, he basically came back to life. Though many have written him off now, it always feels like he is on the cusp of another breakthrough. Sound familiar? 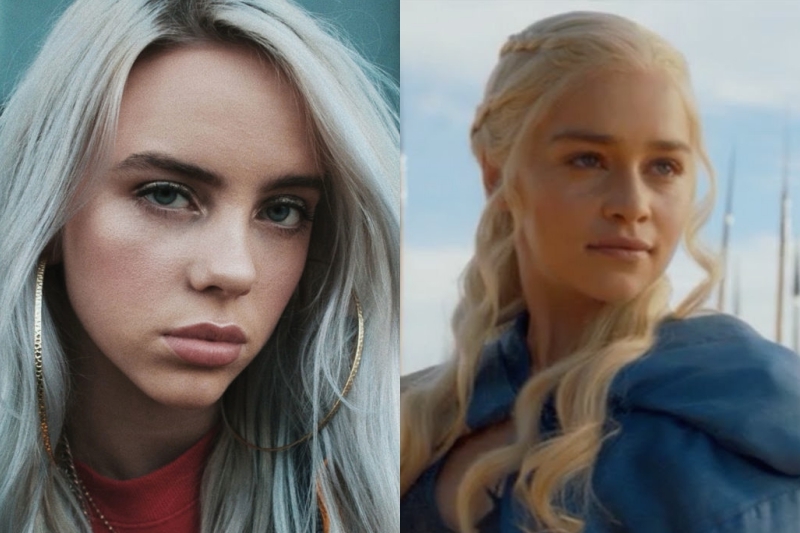 Coming out of seemingly nowhere, Billie Eilish slayed her way into the music scene at the tender age of 15. If one were to picture that scene in their heads with a medieval-ish type of setting, they could think of something similar to Daenerys riding into battle on a fire-breathing Drogon, flanked by Viserion and Rhaegal. To Dany’s enemies, she was an unexpected force that came from across the Narrow Sea, just like how Billie came out of “the homeschool crew” with her breakout single ‘Ocean Eyes’. It is also worth remembering that Dave Grohl recently compared her with Nirvana. 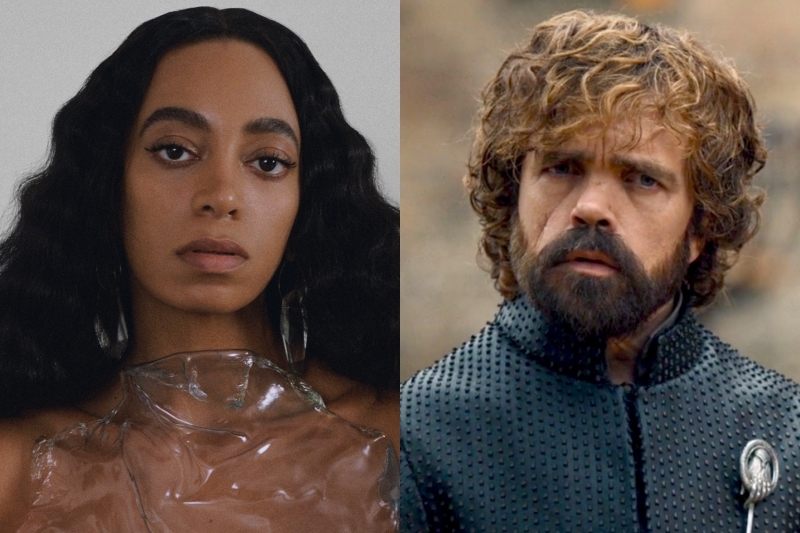 All his life, Tyrion Lannister has been the underdog, languishing in his siblings’ shadows. Imagine what it must feel like for Solange, whose elder sister, Beyoncé, is one of the most formidable artists of all time.

Over the course of eight seasons, Tyrion has proven to be arguably the smartest of the lot, able to pull off the Battle at Blackwater Bay with his quick wit and flexible thinking, as well as getting himself out of numerous life-threatening situations. Likewise, Solange has blazed her own path with a solo career, that, though vastly different from her sister’s, has positioned her as one of the most vital artists of the generation. 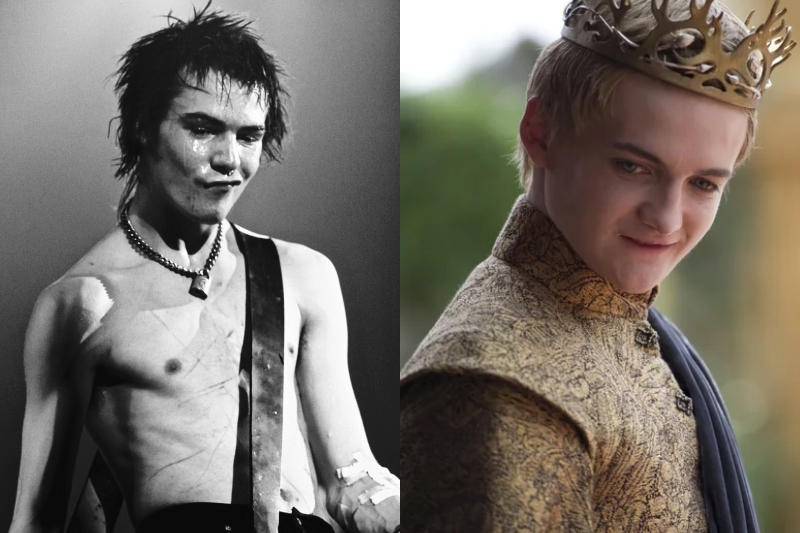 Vicious, that’s what Joffrey is, from the very outset. Like the infamous Sex Pistols bassist, this bratty miscreant does the most outrageous things to satisfy his extremely narcissistic and egotistical urges.

Both have had goblet-centric mishaps that resulted in debilitating consequences for the victims. Case in point: In a frenzied rage, Vicious once flung a glass at someone, causing an innocent bystander to be partially blinded by shards of broken glass. 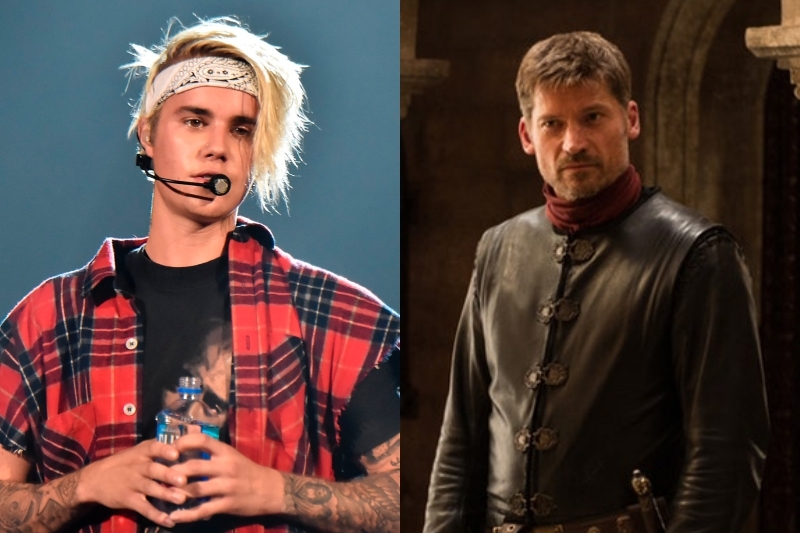 The most superficial point of this pairing would be their physical appearances: Blond, attractive, and popular. However, they are also people who have committed atrocious and shocking acts, but redeemed themselves and became better people later on in their lives.

Jaime was first introduced as someone who would push a young boy out of a window and as the “Kingslayer”, but his character made a turn for the better after he befriended Brienne of Tarth, subsequently saving her from a bear-fighting pit. Justin is someone who has gone through a tumultuous time in his life that consisted of multiple DUIs and court cases. Several public apologies later, Justin seems to have settled down now and has even gotten married to model Hailey Bieber (née Baldwin). 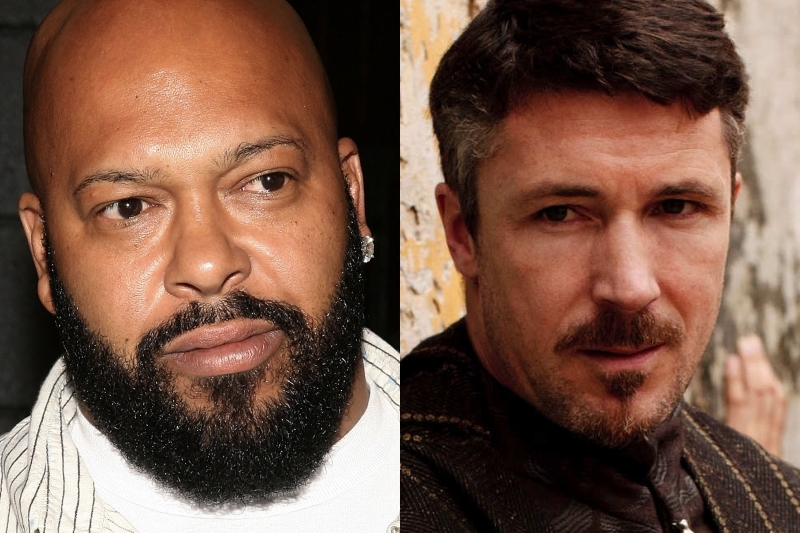 Former producer Suge Knight is, according to many theories, the person behind the murders of rappers Tupac Shakur and Biggie Smalls. In Westeros, Lord Baelish was known to be an unscrupulous person that only served himself, and was the brains behind several people’s deaths.

Littlefinger’s attempts turn the Stark sisters against each other mirrors that of Suge adding fuel to the East Coast/West Coast rap feud. And just like Littlefinger, Suge did not have a happy ending, having to file for bankruptcy and undergoing incarceration. 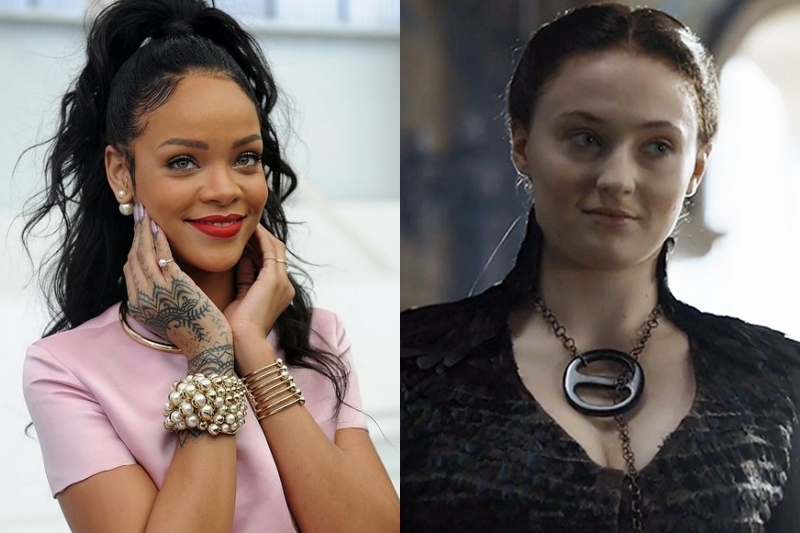 If we are going to talk about Sansa being a naive “little bird”, as Cersei called her, that grew up into a shrewd woman who can be brutal if she wants to, then we can talk about music’s very own “Good Girl Gone Bad”, Rihanna.

Sansa and RiRi both suffered at the hands of abusive men in their lives and emerged stronger, wiser, and more powerful than they ever were. Ramsay Bolton and Chris Brown ain’t got nothing on these two ladies now. 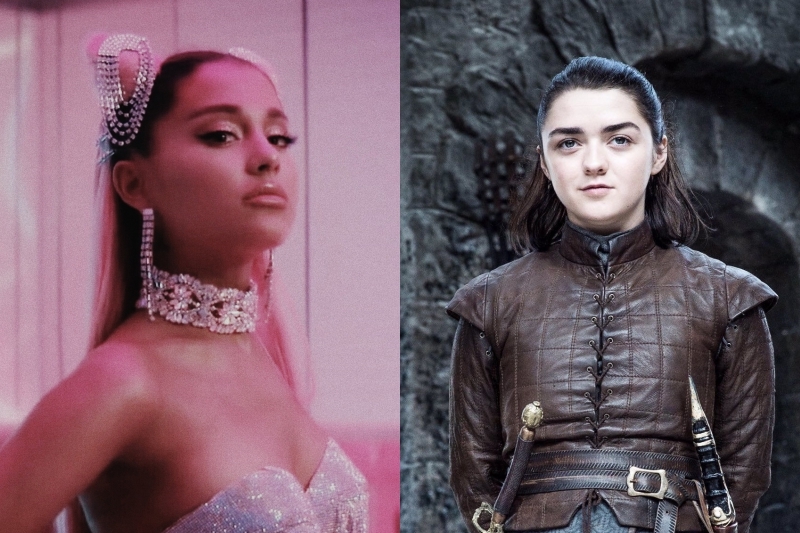 “Been through some sad shit, I should be a sad bitch / Who would’ve thought it’d turn me to a savage?”

Ariana Grande’s lyrics from ‘7 Rings’ rings true to Arya Stark’s story, too. Everyone presumed Arya to be dead after she escaped from King’s Landing following her father’s beheading, but that was far from the truth. Arya managed to become a skilled assassin with her very own “kill list” over the course of several seasons after fleeing from multiple dangers and attempts on her life.

Ari seems to have had a similar developments, too. Calling off her engagement to Pete Davidson after being heavily attacked following Mac Miller’s death, she bounced back and put out her Thank U, Next record, with ‘7 Rings’ reigning at 9 weeks in Top 10 on the Billboard Hot 100 charts. She is currently the most streamed artist in the world, on Spotify.

A girl is Ariana Grande, and she says, “Thank U, Next!” 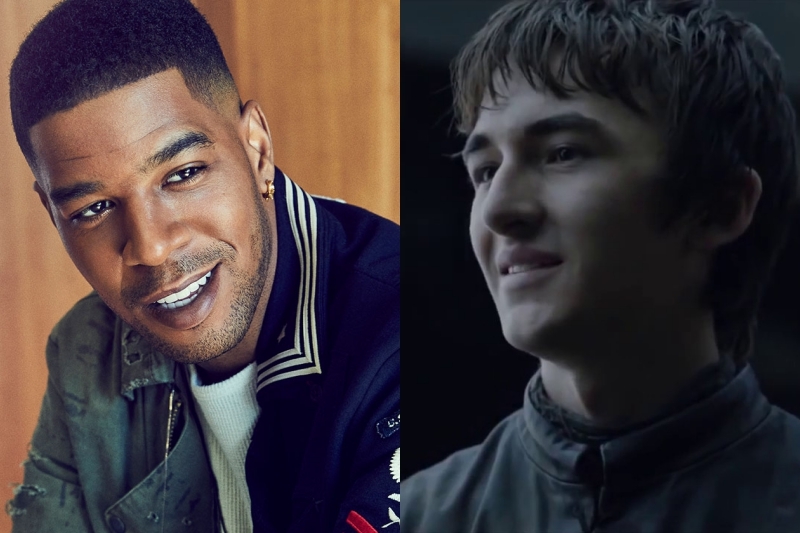 Young Brandon Stark lost the ability to walk, but gained the The Sight, which allows him to see basically anything in the past, present or future. Though he is not traditionally a warrior like his brothers and father, Bran may be the realest of them all, being the all-seeing and all-knowing Three-Eyed Raven.

Kid Cudi is known for being vulnerable in his lyrics, which makes him “one of the realest rappers alive”, in the eyes of fellow musician Travis Scott as well as a multitude of other rappers who follow suit in Cudi’s confessional mode. Neither gangsta nor hypebeast-favourite, Cudi represents emotional honesty and authenticity in hip-hop.

Both Bran and Cudi have broken the moulds of expectations and social norms, which is what makes the two of them the GOAT. 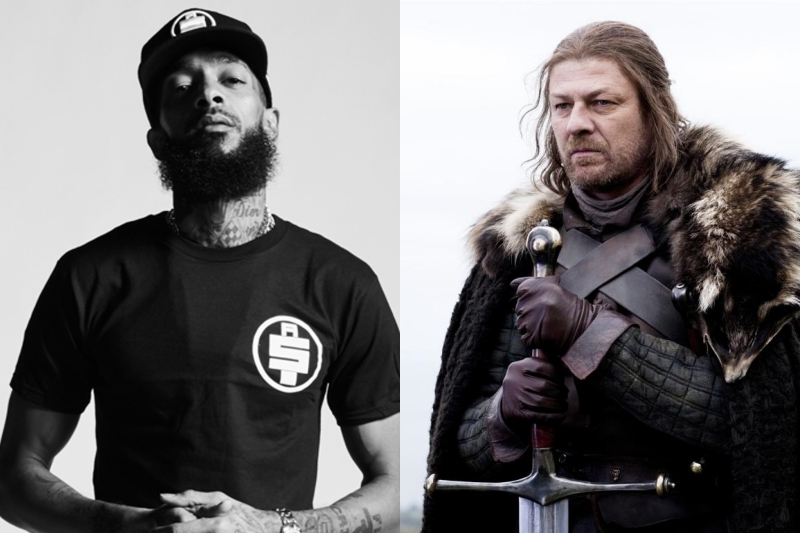 “The honourable Lord Eddard Stark” fought valiantly alongside his best friend Robert Baratheon and helped topple the Mad King. This parallels Nipsey Hussle’s efforts to elevate his community and to break the cycle of poverty and violence that people in Los Angeles' gang-controlled communities face. Nipsey denounced gun violence, and was an activist who used his platform for good.

But sadly, tragedy seems to befall the best of men. Ned Stark was beheaded when he was trying to expose Cersei and Joffery’s illegitimate claim to the Iron Throne and Nipsey Hussle was murdered the day before he was supposed to meet with the LAPD to discuss what they could do to prevent gang violence. Rest In Peace, Ned and Nip.

Bring Me The Horizon – Theon Greyjoy 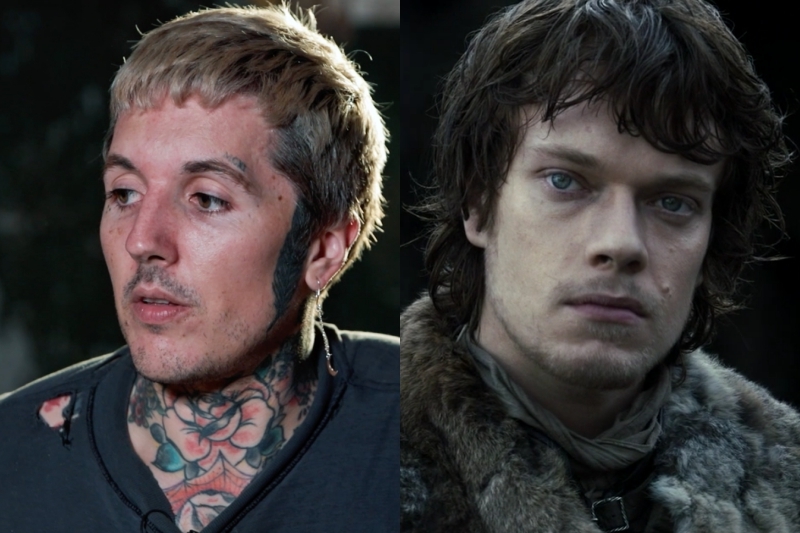 Bring Me The Horizon gained popularity with their heavy riffs and hard-hitting lyrics back in the early 2000s to 2010s. Back then, they were primarily identified with deathcore and metalcore, but over the years they have since shifted focus to less aggressive music styles like pop and electronica. That is not to say that the shift is bad. From a careerist perspective, it is probably for the better as the band evolves and tries new sounds.

Theon Greyjoy experienced a similar shift, albeit in a way more horrendous fashion than the English band ever did. Theon started out being an arrogant and cocky man, proclaiming himself the only living heir to the Iron Islands, but after his capture and torture under the hands of Ramsay Bolton, he became a broken individual who cannot even recall who he was as a person. But after his escape, he decided to return to the Iron Islands to aid his sister in her claim to the Salt Throne, slowly finding himself again. 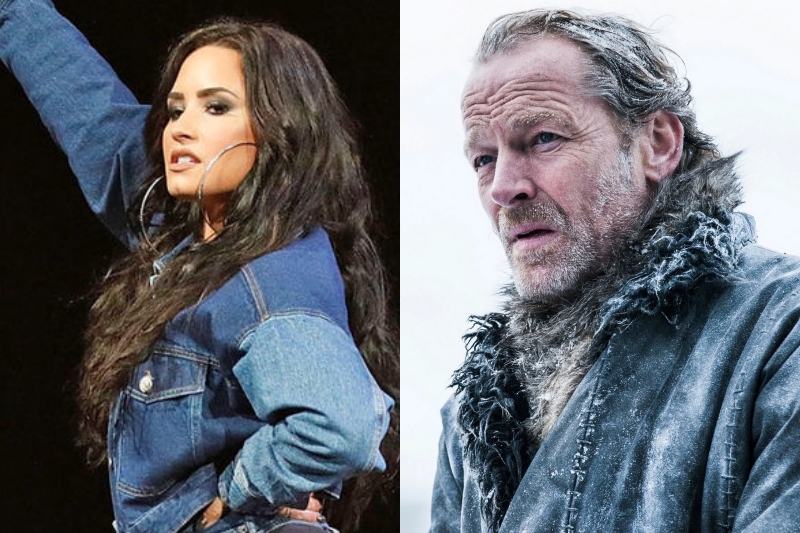 Jorah the Andal was exiled by Daenerys Targaryen for spying on her when she first married Khal Drogo, and had to redeem himself and prove his loyalty to regain her trust. It was a tough fight back to Daenerys’ side, especially when he was battling a skin disease called Greyscale that was almost impossible to cure. He went to seek treatment from the Citadel after being granted permission by Dany, having atoned for his past mistakes.

Similarly, Demi Lovato continues to battle heroically with addiction. After 6 years of sobriety, she apologised to her family, friends, and fans with her song ‘Sober', admitting to having relapsed. The release of the song was followed with her being rushed to treatment after an overdose just a few days later. These days, Demi is upfront about working hard on herself and on her issues and that is what connects these two people across the line of fiction and reality. 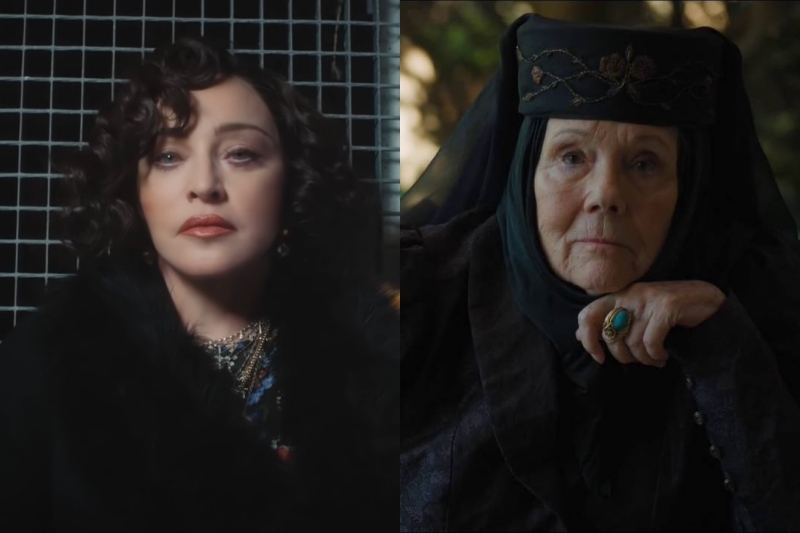 Finally, we are at Game Of Thrones one true queen of shade, Lady Olenna Tyrell. A shrewd woman that has managed to successfully navigate the “Game of Thrones” for years, she still retains a healthy amount of sass. This brings to mind the Queen of Pop, Madonna, who, after years of being in the entertainment industry, still retains her edgy attitude and wit, in the face of younger threats to the throne, like your Arianas, Billies and Gagas.

Madonna has managed to manoeuvre her way through a predominantly male-dominated industry, especially in her early years, and has emerged victorious in multiple ways. Not so much different from the matriarch of House Tyrell, who was politically astute and sensitive enough to her surroundings to survive years of playing the game in which, according to Cersei Lannister, “You win or you die”.