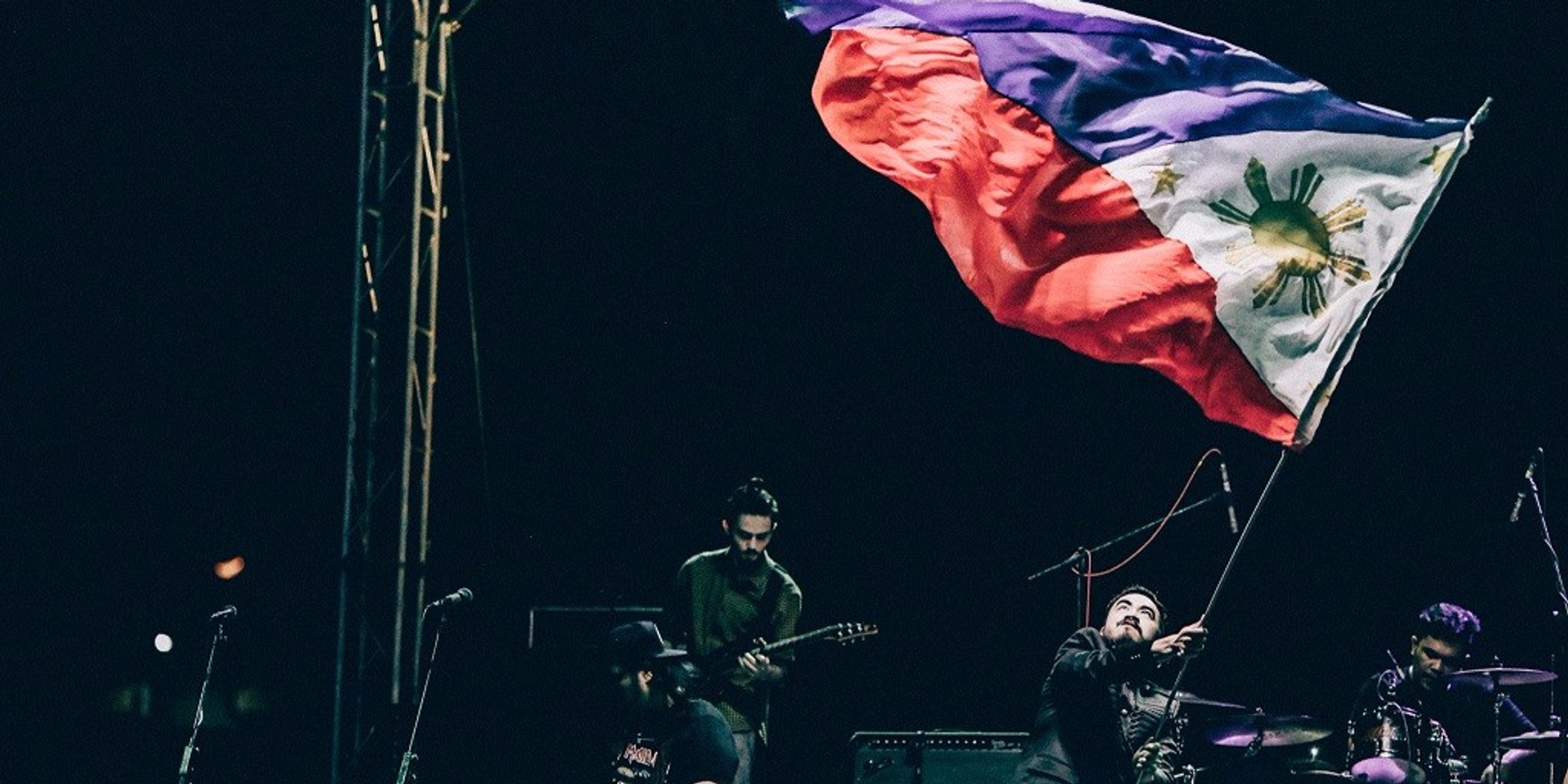 On November 30, timed to the annual commemoration of Bonifacio Day, local musicians took to the stage to join thousands of Filipinos in protest of the burial of late dictator Ferdinand Marcos at the National Heroes' Cemetery.

Bonifacio Day is a national holiday which celebrates the birth of the Father of the Philippine Revolution and one of the country's most highly respected historical figures, Andres Bonifacio. The holiday is a non-working day for Filipinos, giving many the opportunity to gather at the People Power Monument along EDSA, where they held a noise barrage and staged a small concert to fuel the protesters' spirits further.

The range of performers present was wide, with representation from veteran artists such as Gary Granada, Noel Cabangon and Jim Paredes, to familiar names such as Moonstar88 and Ang Bandang Shirley, to even more contemporary acts such as Cheats, Oh! Flamingo, Halik ni Gringo and Bullet Dumas. 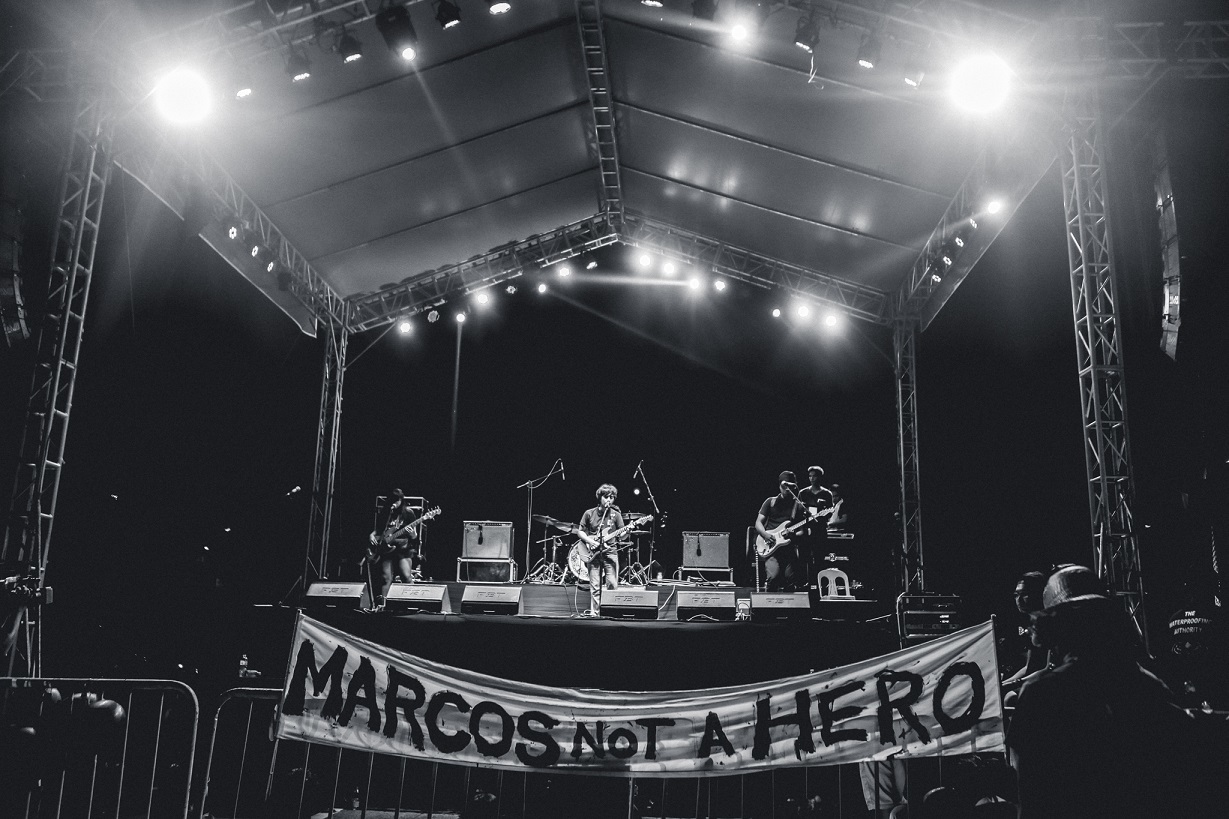 According to Boogs Rosales, an environmentalist who was present at the rally, among the songs that resonated most with the crowd were Noel Cabangon's 'Tatsulok' and Bullet Dumas's 'Usisa'. "The rally, and the events that led to it, gave profound context to many Filipino songs that talk about injustices and how we are continually manipulated and failed by the system," said Rosales. "There [have not been] many instances where people could chant the lyrics [to 'Tatsulok']. And the emotional charge [of Bullet's song] really fed the frustration and anger of the people."

Dumas, whose original songs speak of passion in various forms, told Bandwagon that he wrote 'Usisa' when he started feeling that the Philippines was, literally and figuratively, getting crazier and crazier. "Fights on social media that turned friends to enemies, terrible news here (and even the world) and a whole lot more—everything was a mess and it was frustrating and exhausting." Dumas wrote the song based a well-known character from Jose Rizal's Noli Me Tangere, Sisa, who is said to be Rizal's symbolism for our suffering motherland. "Rizal's characters are still very relevant until this day," added Dumas. 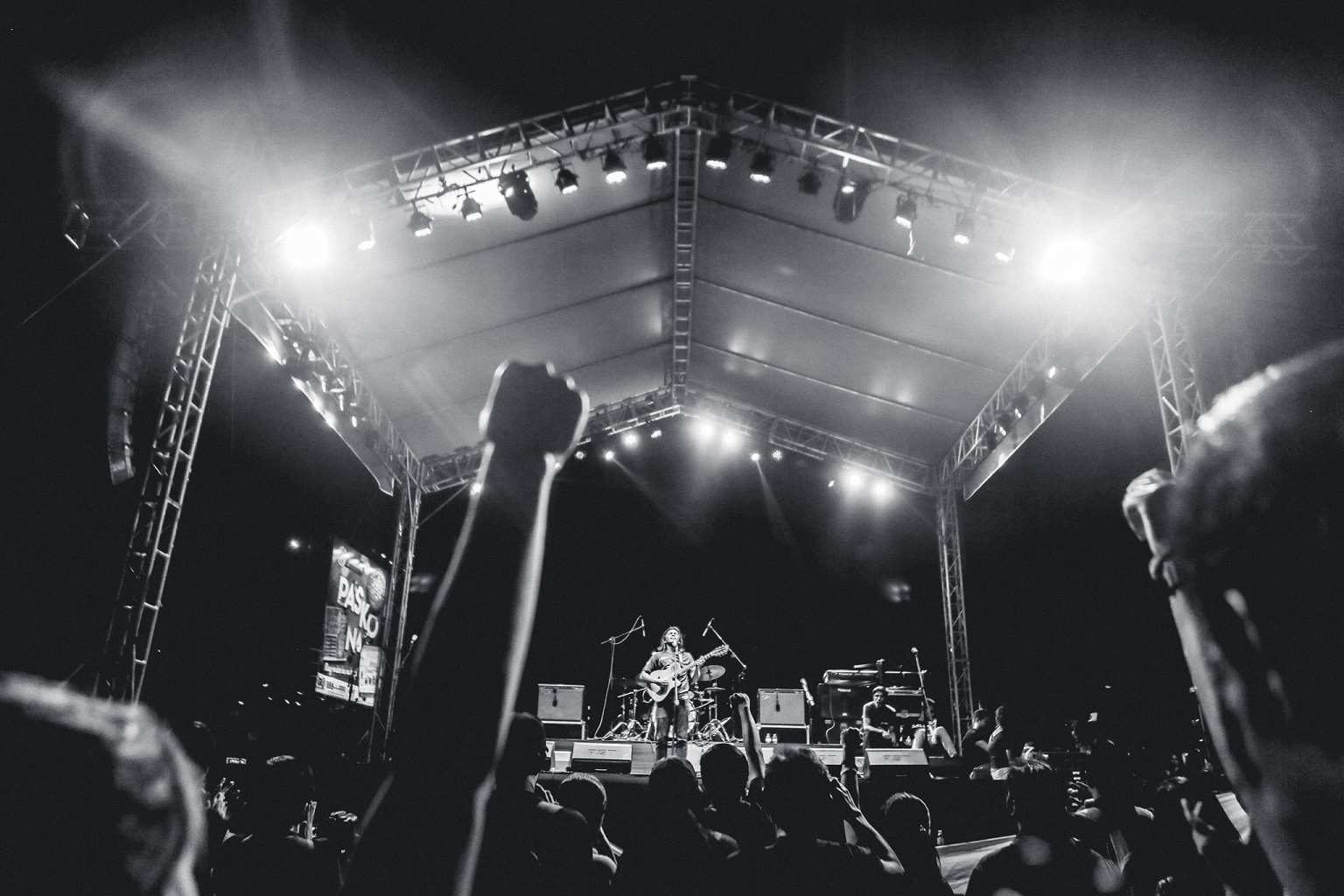 Fights on social media that turned friends to enemies, terrible news here (and even the world) and a whole lot more — everything was a mess and it was frustrating and exhausting.

Part of Dumas' spiel also involved him asking the crowd to sing along to his rendition of the classic patriotic song 'Pilipinas Kong Mahal'. What made for a particularly memorable moment was when he'd changed the final lyric from Pilipinas kong hirang (My darling Philippines) to Pilipinas kong hibang (My deranged Philippines). "I think I tweeted that line during campaign period this year."

Meanwhile, in feeling the magnitude of the event, the members of Cheats, who are known for their playful presence both onstage and on record, admittedly had a tough time deciding which songs to play. "In the end, we decided to play our most rocking songs, as they had lines that could be applicable to the situation," said guitarist Jason Caballa. "Like We will never be alone from 'Accidents'. After our set, I told my band mates that I thought we did a really great thing by playing. It was, as some of us tweeted, our most important gig of the year."

Each act present delivered their own brand of indignation to the stage, from the sage and solemn to the youthful and wild.

Mia Marci, an English and History teacher, recalled Moonstar88 doing 'Migraine' then a cover of 'Ang Huling El Bimbo', and Jim Paredes singing 'Batang-bata Ka Pa' followed by an EDSA song. When asked what it meant for her, seeing these musicians stand with them for their cause, she said that, for her, it wasn't about them being musicians. "That helped, and I know they knew it helped — as Moonstar and Jim were recognizable names — but whether onstage or in the crowd, what what was the most moving was we were united for the country. Everyone was doing their part, the bands and acts were there encouraging people to stay and take a stand... It was really a heart-led, passionate movement on everyone's part." 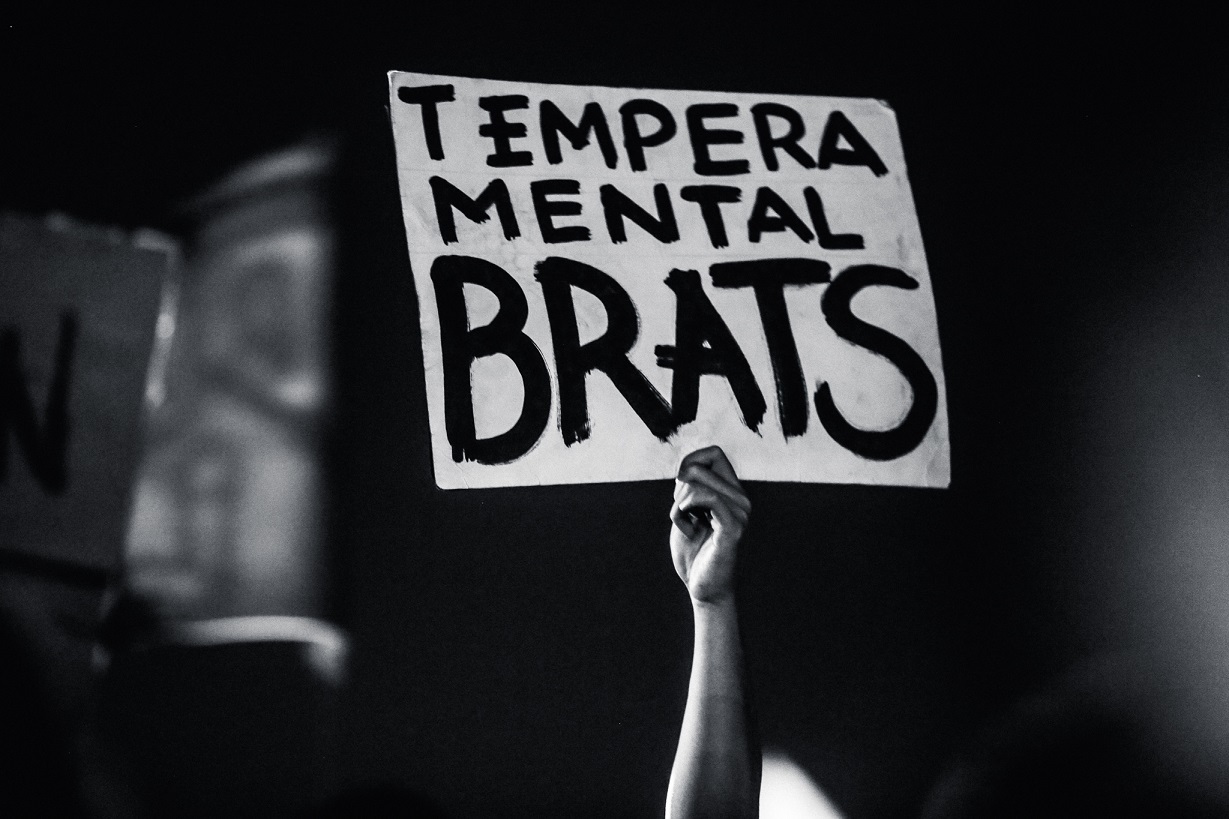 Songs have always been powerful in protests, like 'Bayan Ko', and it's good to hear new protest songs that our generation can call our own! Though we look back to protest songs of the 70s, it's important to create our own as well.

The power of the protests had been felt througout the country and even across oceans. Mariah Reodica, a Bandwagon writer and vocalist/guitarist for The Buildings, watched Rappler's livestream of the event all the way from Chuo University, where she is currently in a cross enrollment program.

"Being in Tokyo, I rarely get to hear Filipino, so every time I do, I'm drawn to it," said Reodica. "I was listening to Bullet's lyrics and it articulated something I feel strongly about. Songs have always been powerful in protests, like 'Bayan Ko', and it's good to hear new protest songs that our generation can call our own! Though we look back to protest songs of the 70s, it's important to create our own as well." 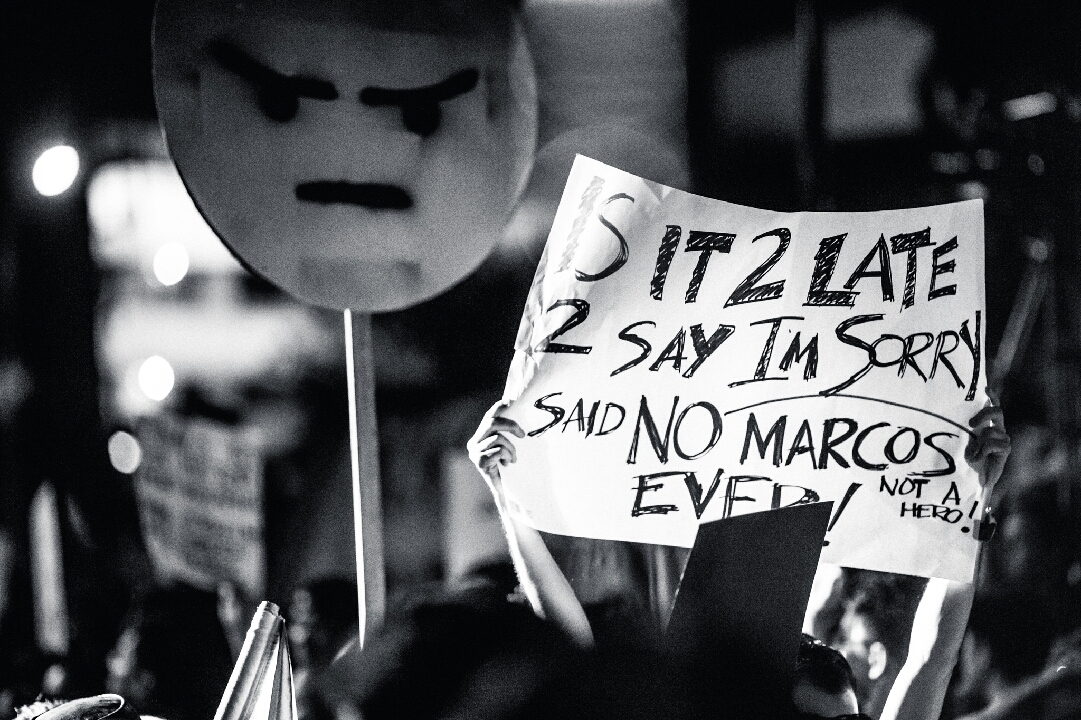 Josyn Palma, a security researcher who has written papers on topics such as the Arab Spring Protests and millennial participation in protests, said witnessing the active participation of local musicians filled her with pride:

"Music is so integral to our identity as Filipino — we passed on our stories through singing and dance, shown our love through harana, we've grown up with songs and music all around us — it's so important that our musicians also take a stand and express themselves through song the way we always have. Music is such a great medium to convey ideas. If we can do it about love, why can't we do it about politics?

"And frankly music always seems to bring hope, and it's what we need most right now. Our musicians are also huge influences in how teenagers formulate ideas and self-expression, so to have them use their influence to shine a light on something that the government wants us to forget gives me hope that more people will really look and study the reasons why we took to the streets. They're our storytellers and our scribes. To have them show up at the rally gave me hope that our generation will form songs of our own for the generations to come."