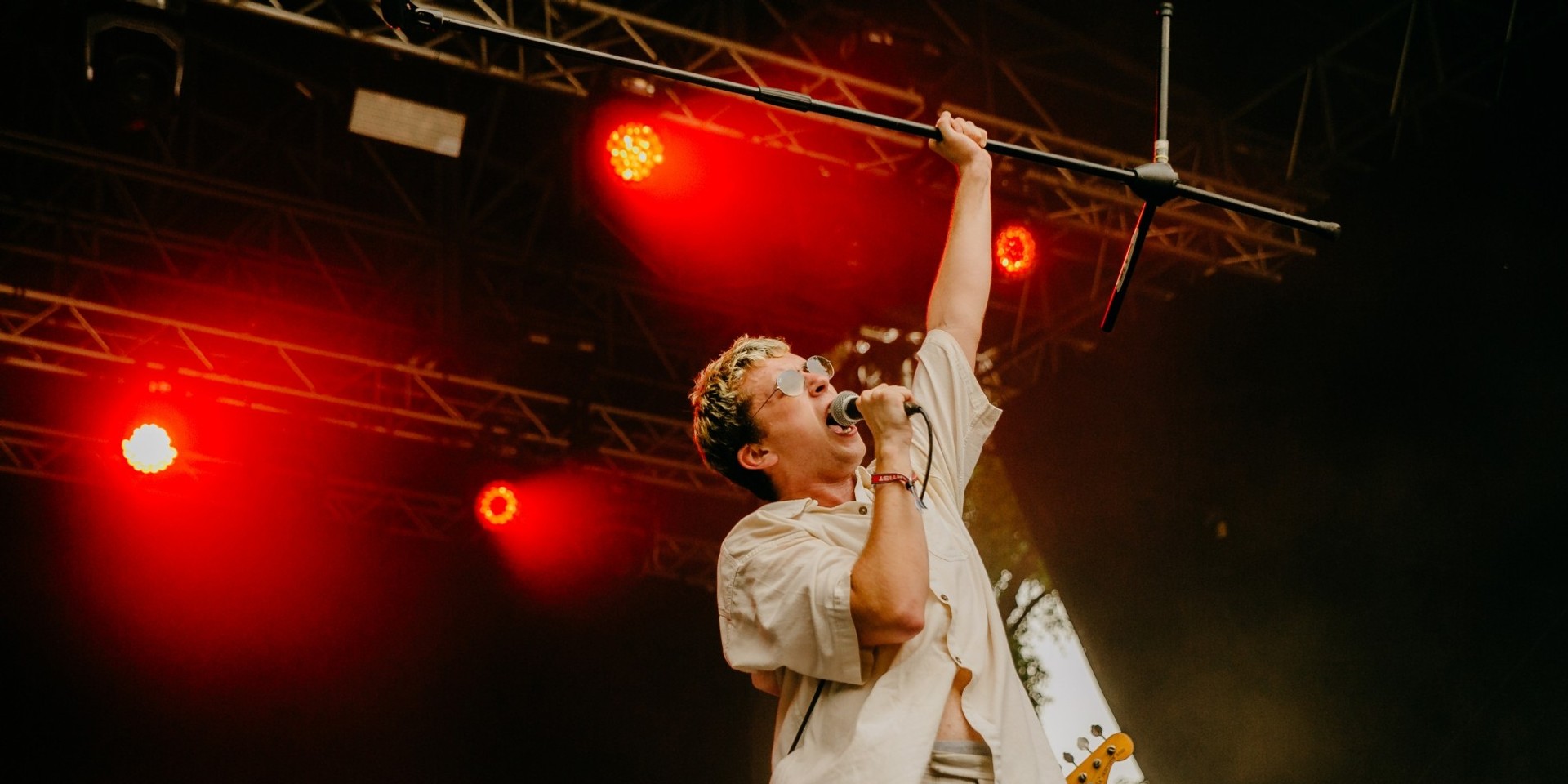 Rain can bestow a panoramic majesty to things. When Sigur Ros closed off the previous edition of Neon Lights in 2016, the epic thrall of the band’s music benefitted greatly from the spectral post-rain atmosphere. At last weekend’s comeback iteration of the festival, it rained yet again – hard. And other bands were the beneficiaries of the elements. With a payload that included big tent attractions such as Yuna, Rhye, Cigarettes After Sex, Caribou and Interpol, all of which unspool their music like rosary beads of texture and vibe, Neon Lights 2018 proved to be an unmitigated success.

For the first time in its history, the festival enveloped the weekend as a three-day entity but in a smaller space as only Fort Gate at Fort Canning Park was utilised. This new precedent paid off well. Yes, the proof is in the numbers. A turnout of 2000 graced Friday; a sold-out and drenched 3500 came out for Saturday’s rock-leaning lineup, whilst 2800 attended the closer on Sunday. But it’s what the numbers don’t tell you that matters when it comes to the archival significance of memory. What follows are our fondest memories of the festival. 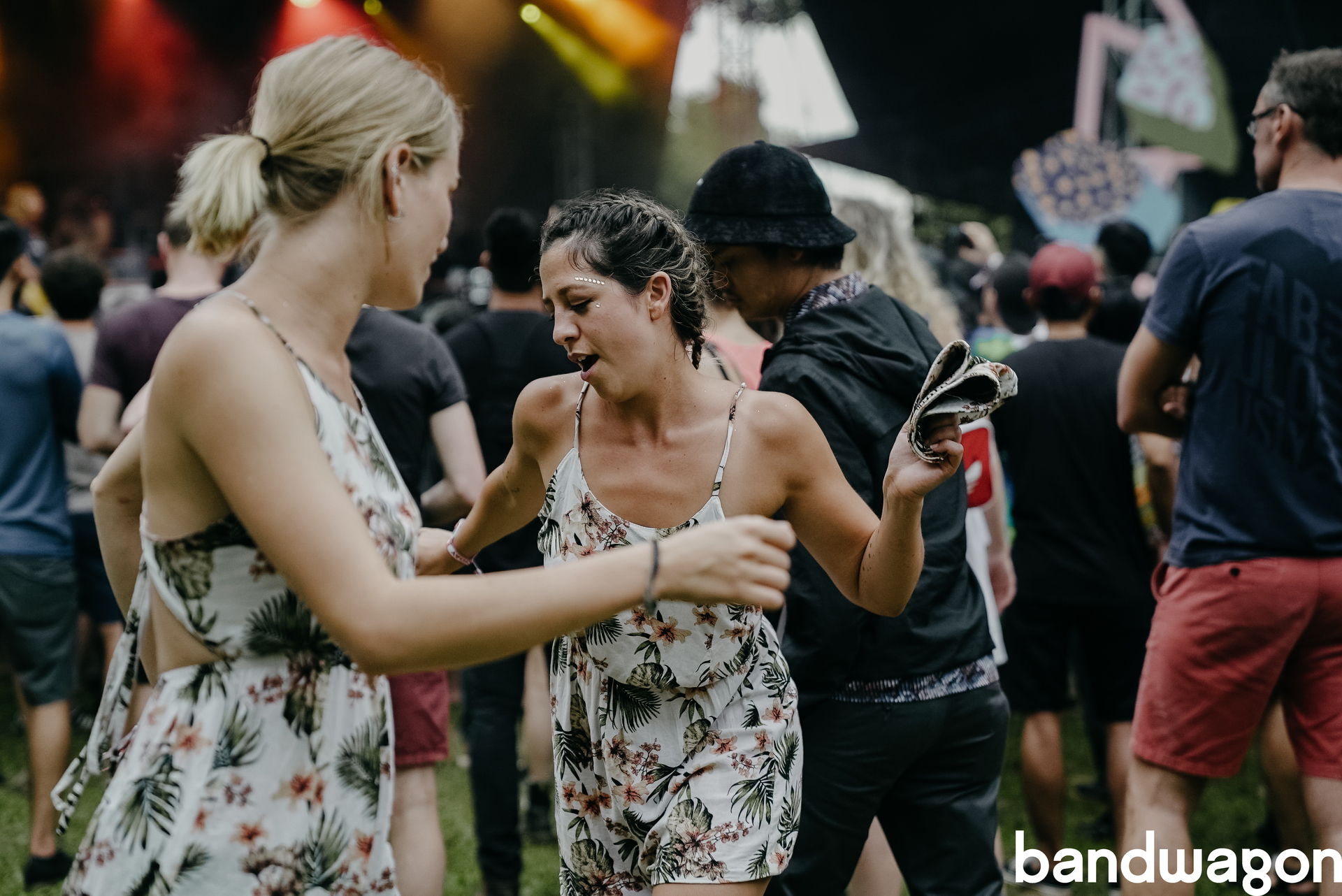 One of Singapore’s social media sensations took the stage with her rapper brother at Easy Street on Neon Light’s opening night. Preetipls and Subhas started off with their latest Deepavali remix of Panjabi MC’s ‘Beware of the Boys’. The 98.7FM DJ followed with tracks such as ‘Podak Brown’ while Subhas proceeded with his sociopolitical rap songs such as ‘modern slavery’. The duo’s was as promising as it was entertaining. 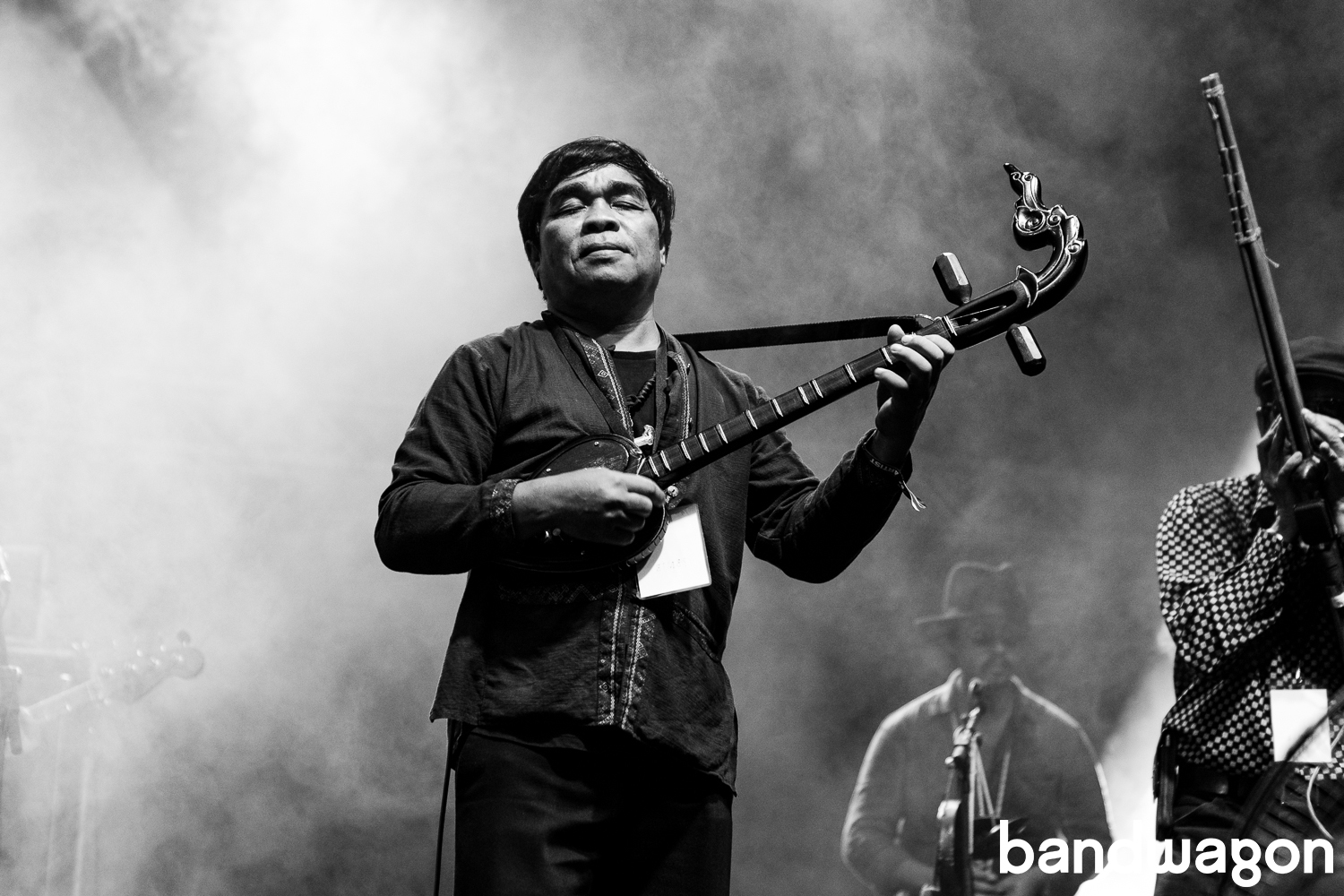 Then, the Paradise Bangkok Molam International Band performed its modern spin on classic Thai pop songs to an enthusiastic crowd at the main stage. The sestet also spread its culture through songs such as ‘Chasing the Cow’, prior to which the lead singer asked the audience to imagine itself on a mountain in the North Eastern part of Thailand. This group of musicians and DJs definitely pulled out all the stops with its mix of modern and traditional instruments, including a wooden mouth organ which added a dashing complexity to their set and certainly got everyone moving to its funky beats. 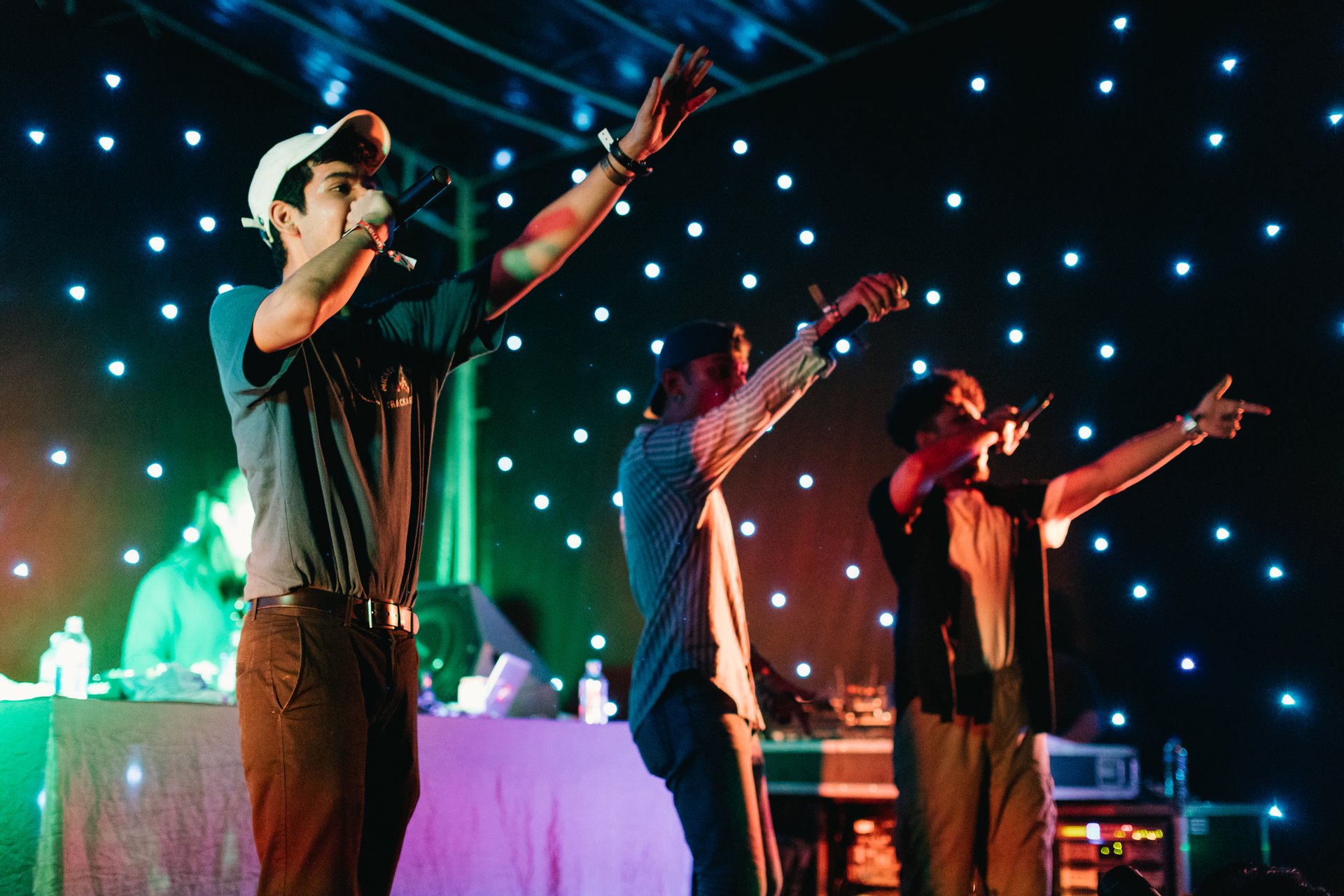 Thereafter, rap trio Mediocre Haircut Crew laid absolute dominion over Easy Street with its turbo-charged rap and boyish charisma. The lads looked very comfortable on stage and punctuated their set with knowing/winning smiles. They even interacted with the audience by doing a “crowd check” which garnered screaming responses from fans. MHC closed out its set with its hit ‘Lose Your Love’, to the listeners waving their lighters and phones in the air. It was picture-perfect and so much more. 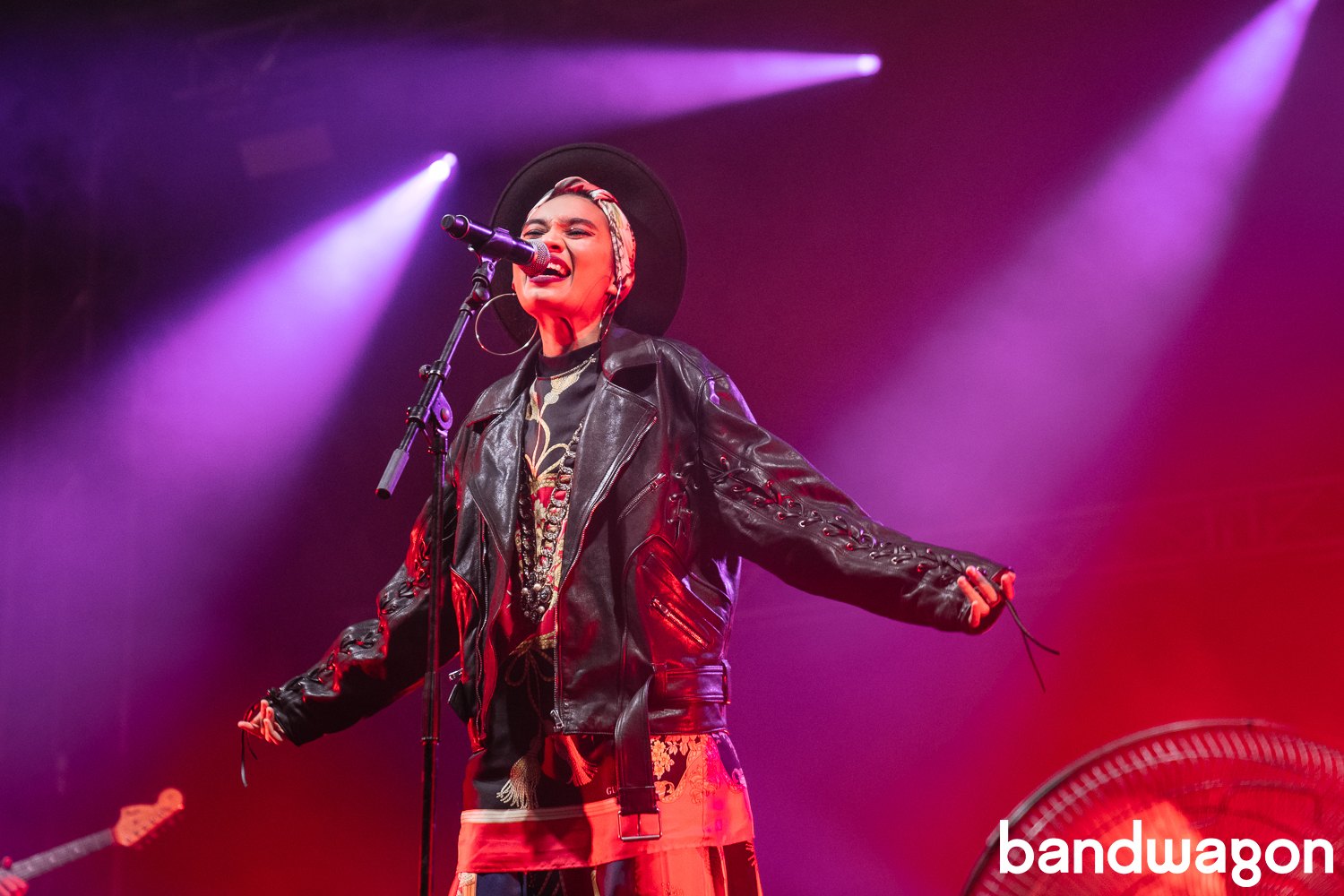 Yuna certainly proved her headliner status with her sultry vocals and irresistible charm as she closed out day one of Neon Lights. The regionally and internationally beloved singer-songwriter, best known for her hit with Usher, ‘Crush’, sang several hits from her 2016 album Chapters and even included a cover of Post Malone’s ‘Better Now’ which got loud cheers from the audience. She also sang a Malay song to the delight of her fans. Midway through her performance, she thanked her fans for sticking with her since day one, which, she reminisced, was more than a decade ago. She even debuted a new song ‘Forever More’,  elicited screams of gratitude from her immense crowd. 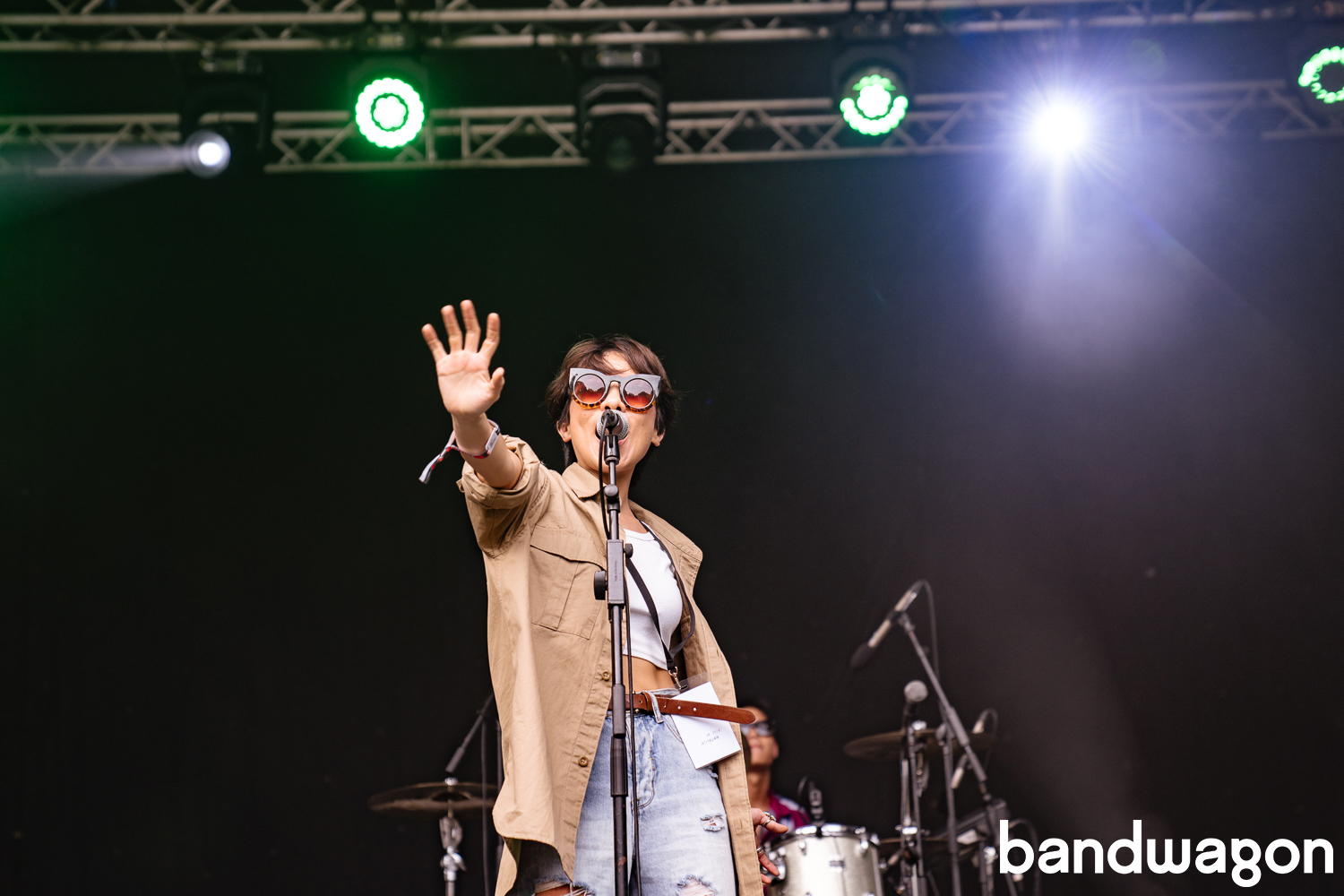 Homegrown electronic pop band Riot !n Magenta is no stranger to the big stage with appearances at St. Jerome’s Laneway Festival and Baybeats and an opening stint for Chvrches back in 2014, in its resumé. Taking the second slot at the main stage on day number two, the band performed several songs from its self-titled album which released in July this year. Lead singer Eugenia Yip was utterly captivating as she wowed listeners with her powerhouse vocals and dance moves to the band’s smooth, synth-laced and hypnotic music. 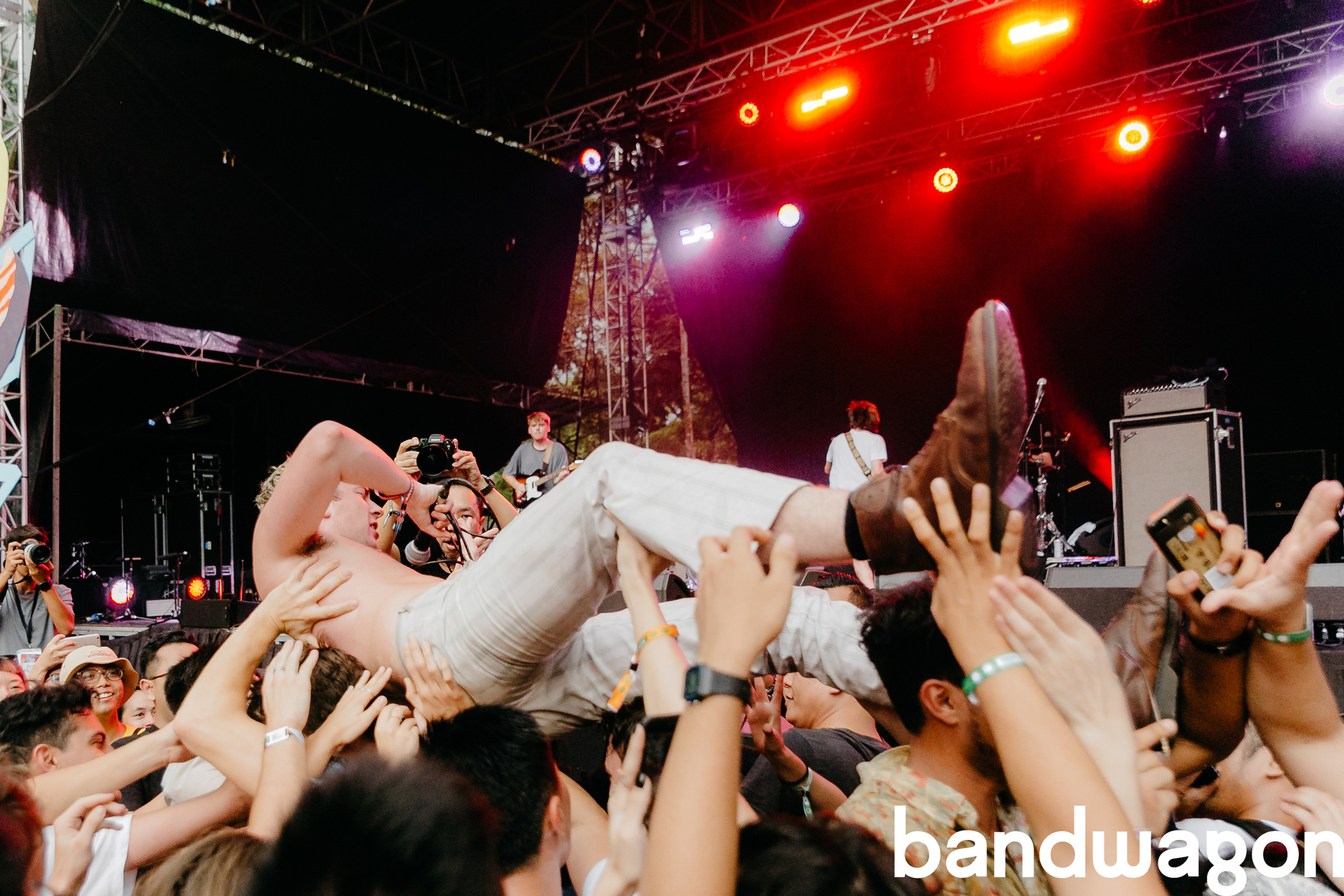 Unapologetic British post-punk band Shame commanded the main stage and drove festival goers into a moshing frenzy with its hard-hitting ethos. Lead singer Charlie Steen howling like a banshee was the festival’s most unequivocal rock moment. Towards the end of Shame’s set, Steen jumped into the pit and crowd-surfed to the delight of enthusiastic fans. 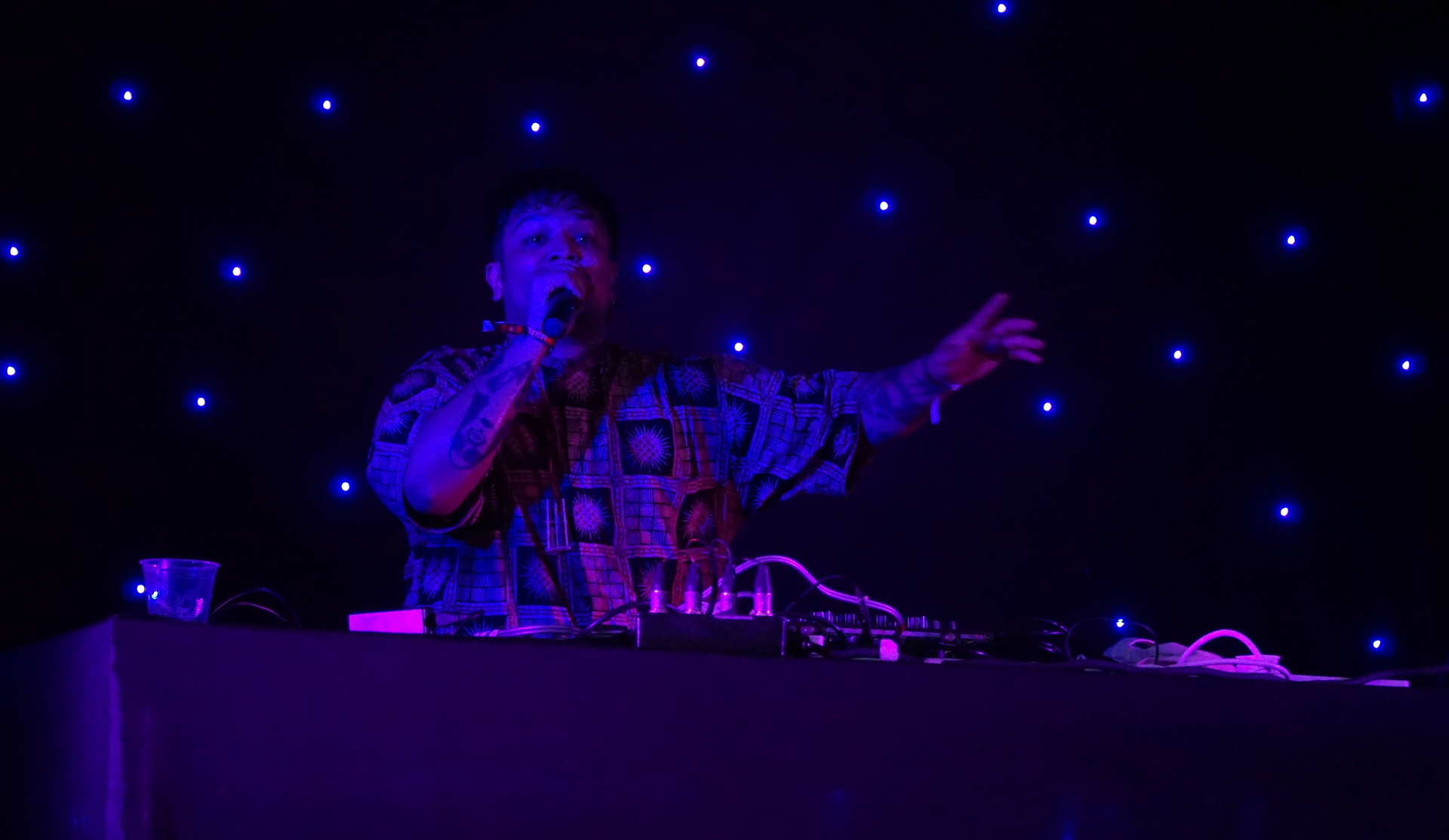 Back on Easy Street, Singaporean producer and beatsmith extraordinaire Fauxe held court. By this point, it’s public knowledge that every Fauxe live outing is next-level destined and since he never plays the same set twice, this was yet another one that was spectacular to behold. But the even sweeter prize was his promise that new music is on the way. 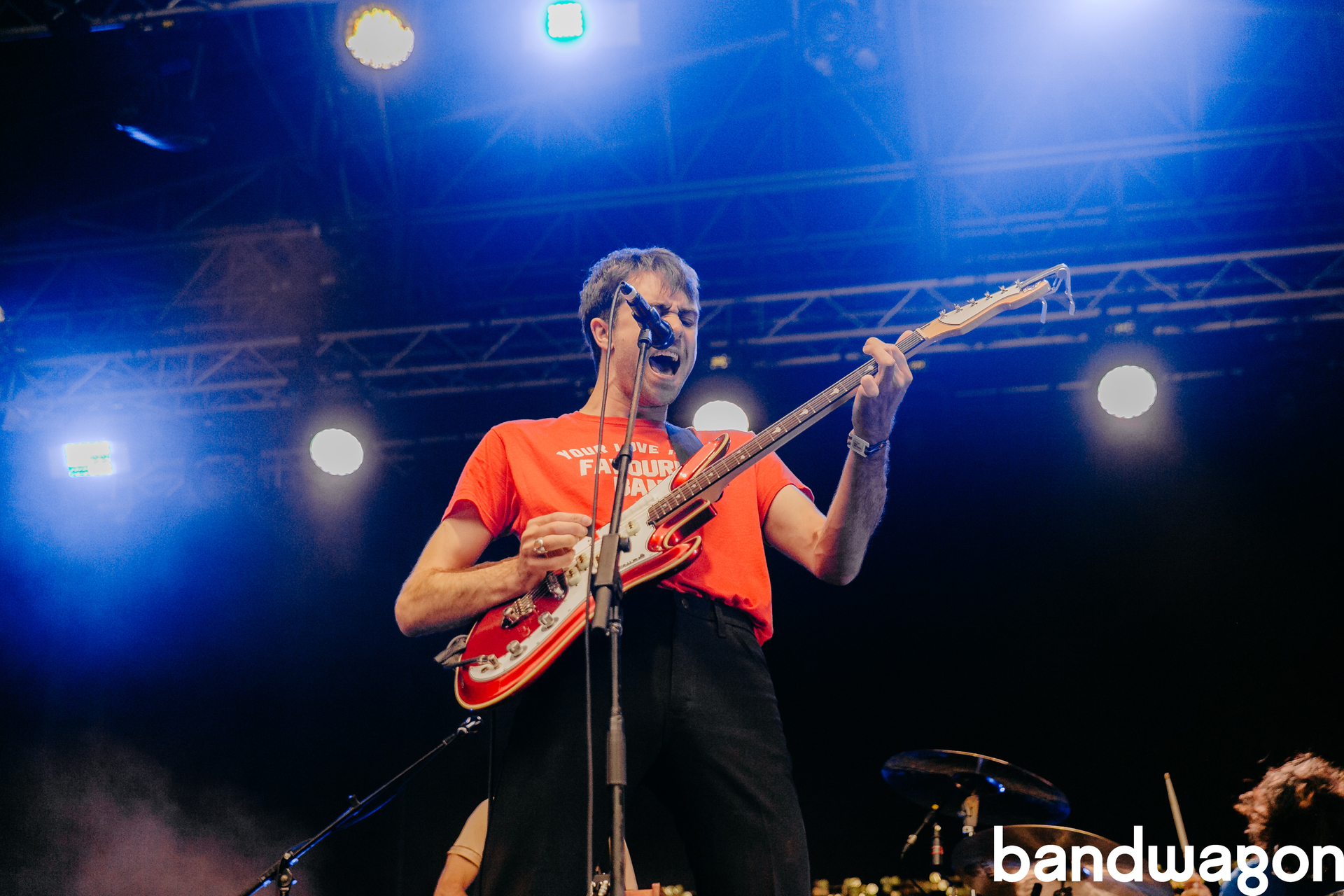 There are many reasons why The Vaccines were hot property at Neon Lights and during its hour-long set, the West London-based band lived all of them out. Clad in a red t-shirt with ‘Your Love Is My Favourite Band’ emblazoned in front, lead singer Justin Hayward-Young led the band through fan-favourites such as ‘Post Break-Up Sex’ and ‘Wetsuit’. The band even surprised fans with the performance of their new track ‘All My Friends Are Falling In Love’. It closed the set with ‘All In White’ which prompted a sing-along from the audience as well as emphatic shrieks of applause.

And then, it rained. 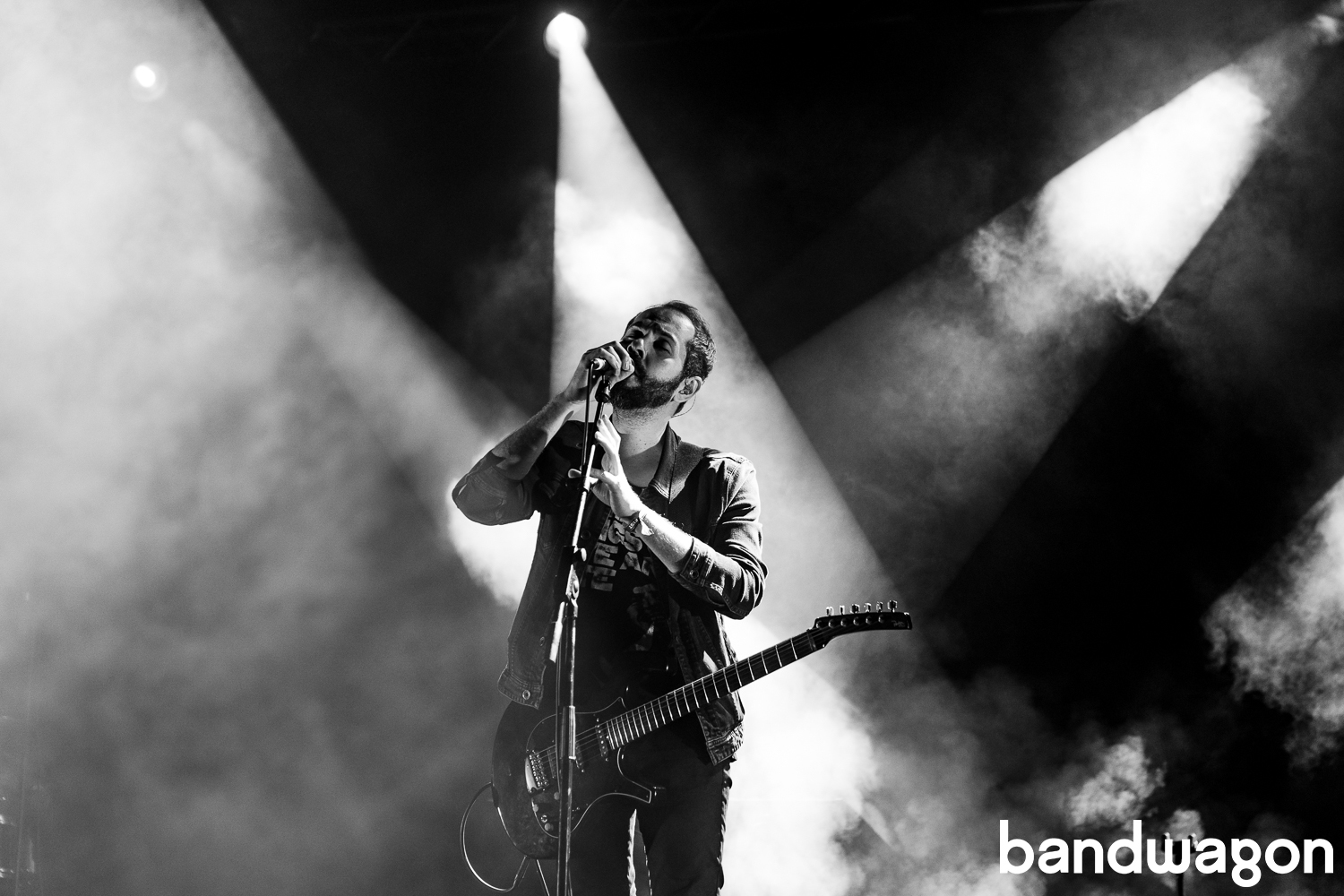 Known for its melancholic slowcore beats, Cigarettes After Sex capitalised on the rain-induced shift in mood and brought festivalgoers to an infinitely more inward and contemplative place. Its music may not be for everyone but that night, frontman Greg Gonzalez and co. played to their diehards, for whom its brand of confessional ethereality is a sublime experience. Rain did not faze the crowd – people moved to songs such as ‘Nothing’s Gonna Hurt You Baby’ like the band was playing a sunset beach set. The rain brought forth a hushed atmosphere to the proceedings, creating a black-and-white scene, with no filter necessary.

And then, Interpol took the stage. 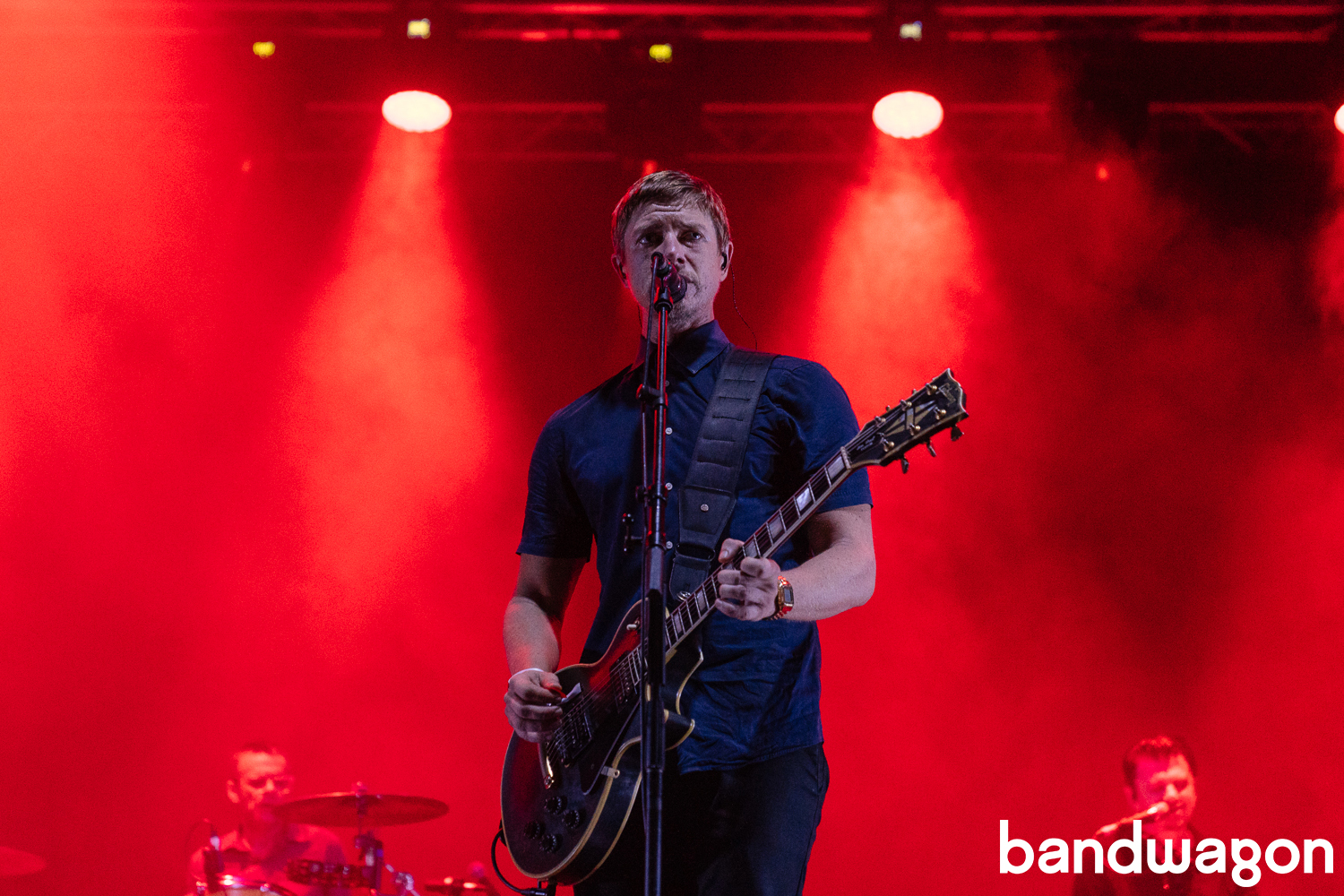 As the only headlining act which hadn’t played in Singapore before, the arrival of the New York rock band, whose sixth album Marauder, released in August this year, on our soil, had the dimensions of a historic event. Its mammoth 15-song setlist was more than just fan service – it was intentionality writ swaggeringly large. We didn’t need ‘The Heinrich Maneuvre’ when there was a kiss-offs like ‘Evil’, ‘Roland’, ‘All the Rage Back Home’, ‘PDA’, ‘Stella Was a Diver and She Was Always Down’ and ‘Obstacle 1’. This was the single best set of the festival.

This time, the rain wasn’t merely a mood-enhancer but a legitimate concern. With the safety of its attendees in mind, the festival made the right call to delay the start of the final day of the festival. But when the sky cleared, it was, very literally, time to play. 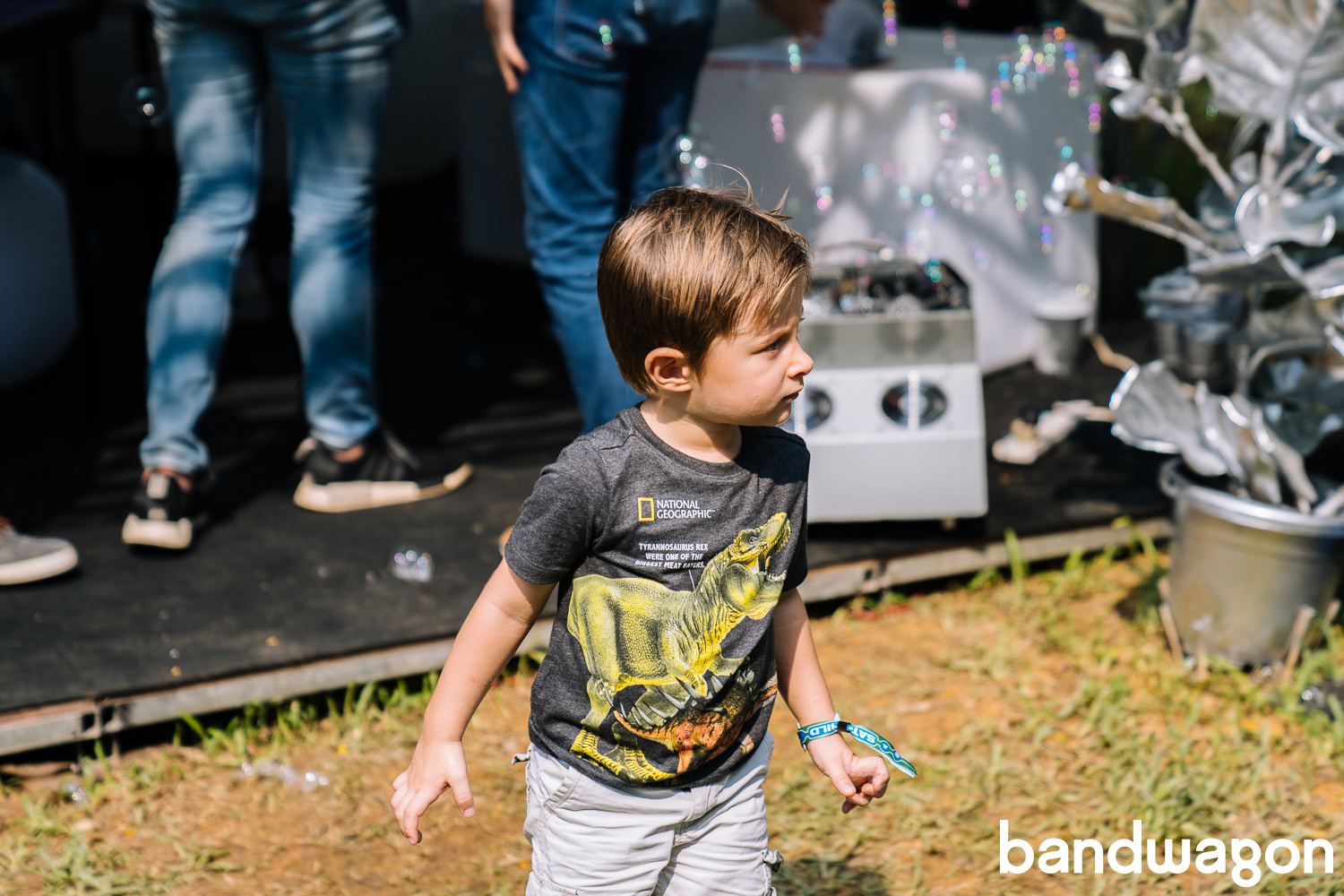 The quirky-yet-authentic aura of Sobs has beckoned like-minded introverts since its inception. The Singaporean band’s Neon Lights outing was correspondingly dream-pop: Young, alluring, reflective but gleefully sincere, like having friends playing music in your bedroom.

Initially part of the collective Bodega Bay, Ben Hozie and Nikke Belfiglio came together and returned as the post-punk band, Bodega. Joined by Madison Velding-Vandam, Heather Elle and Montana Simone, the quintet maintained its familiar candid, rock anthems while adding foot-stomping beats. Fresh off the release of its debut album, Endless Scroll, this year, the band delivered a masterful performance at the main stage. 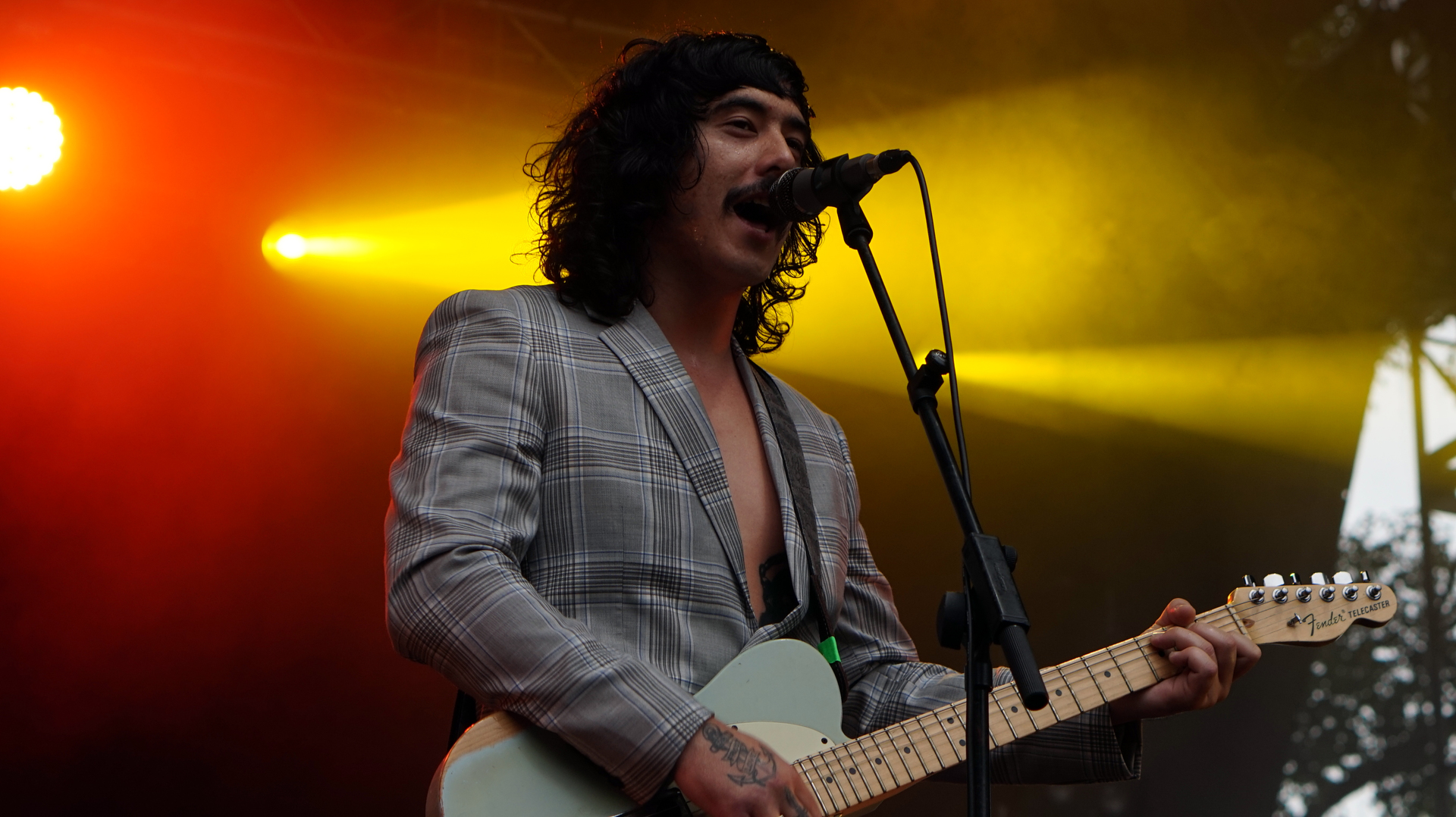 Ever-quirky, the cult reggae-rock alchemising Sydney band Sticky Fingers then emerged onstage to a hero’s welcome. After announcing the end of its hiatus with the release of a new single, aptly named, ‘Kick On’, its performance at Neon Lights showed that the boys are indeed ready to party with their fans in their supremely chilled -out ways. The audience, encouraged, had dance parties in the mud all around the grounds – what further encouragement would it need? 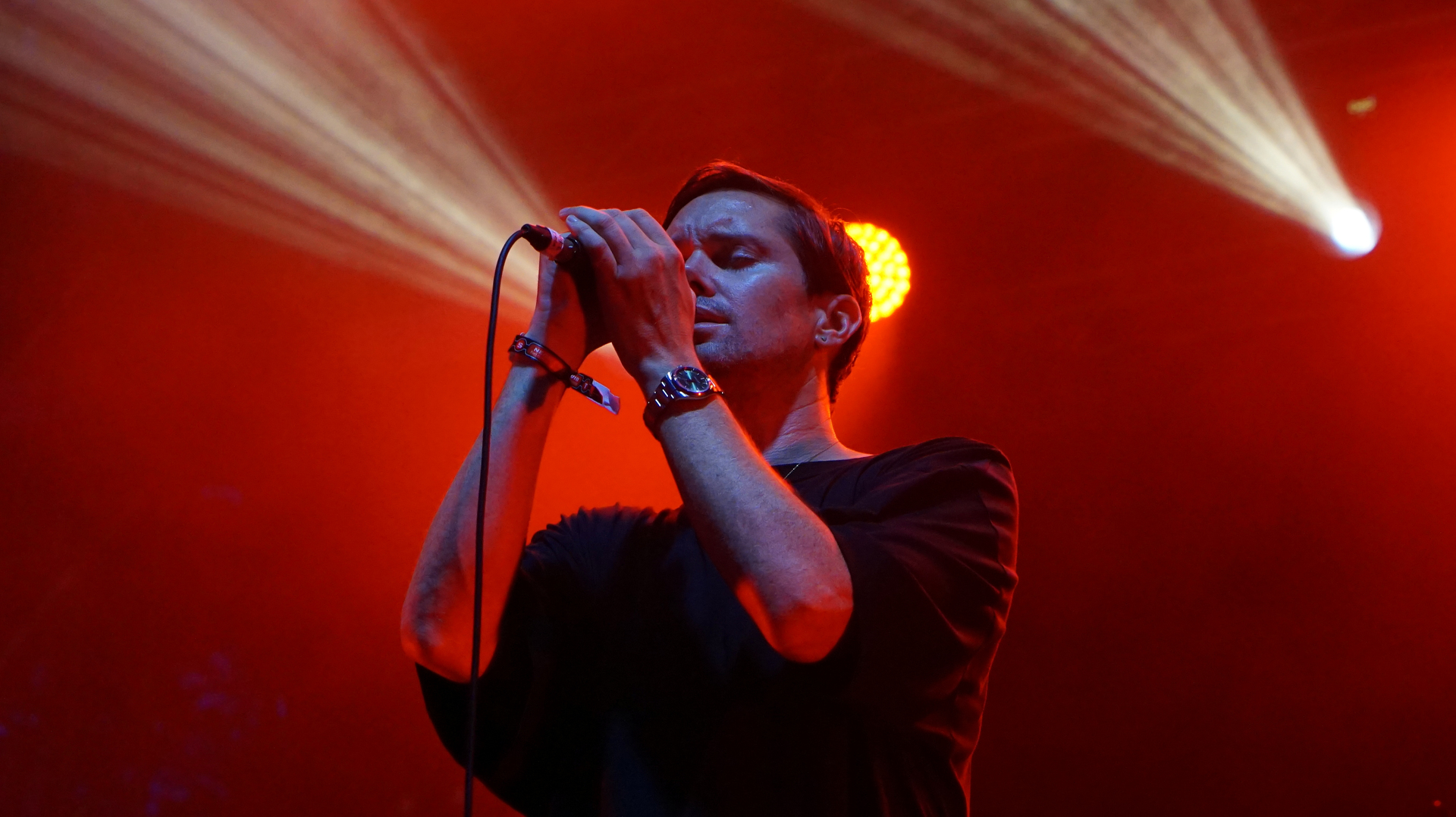 Possibly the only act on Sunday which kept festivalgoers grounded, Rhye serenaded the audience with frontman Mike Milosh’s breathtaking vocals, creating an atmosphere of stunning intimacy. Unbeknowst to many, the emotional singer-songwriter plays its sets without a rigid setlist, perfectly matching its philosophy of being in the moment. Its gushingly emotional lyrics brought an air of gravity to the party. 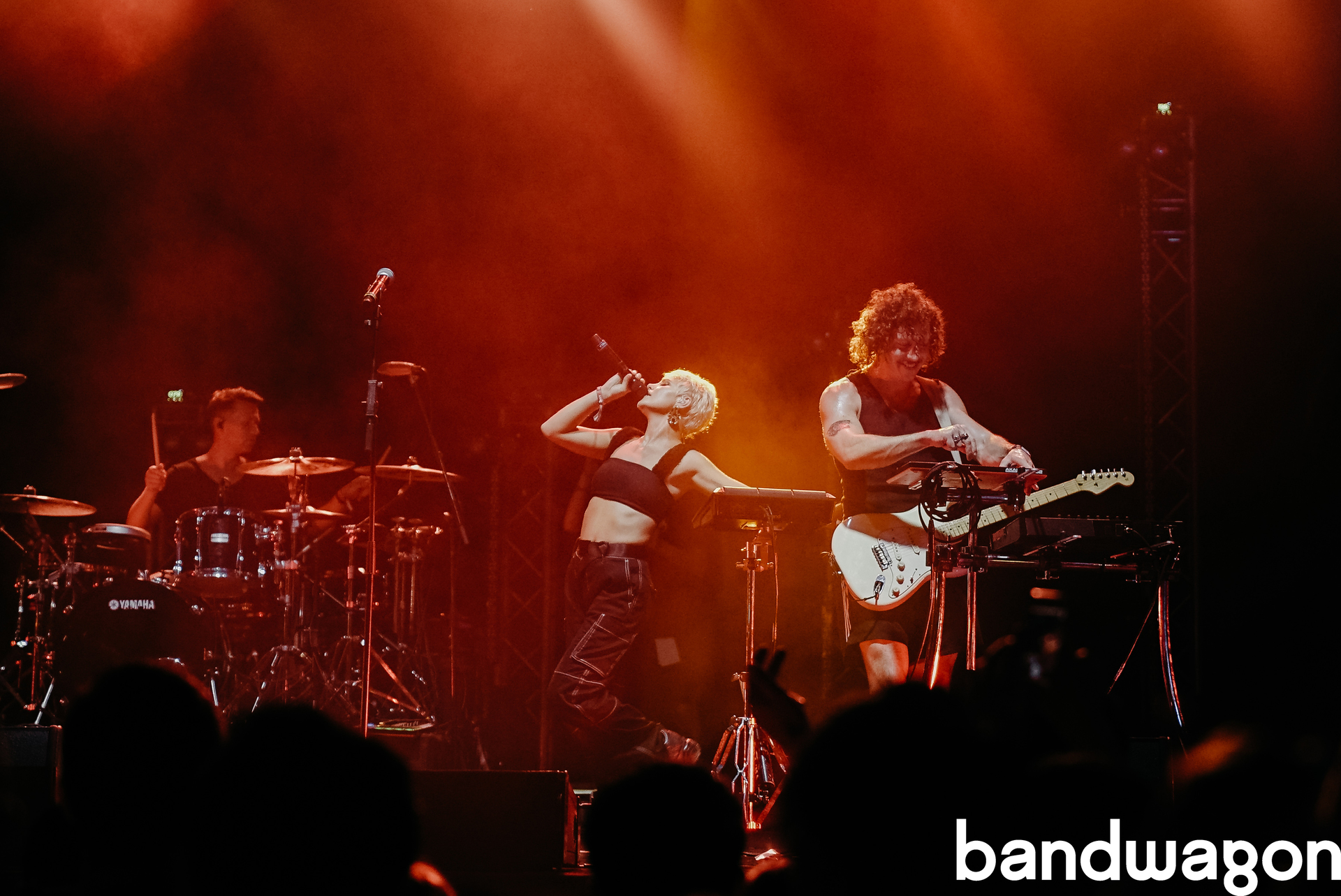 Arguably the best performers of the night, Australian duo Peking Duk brought its charms in full supply to the main stage. Performing with a full band, the duo injected a swaggering bounce into the proceedings with its electrifying tracks that got everyone, even those at the food tents, moving. The cheeky lads performed its 2018 single ‘Wasted’, which in all honestly, with its high-energy, best reflected what they bring to the table. 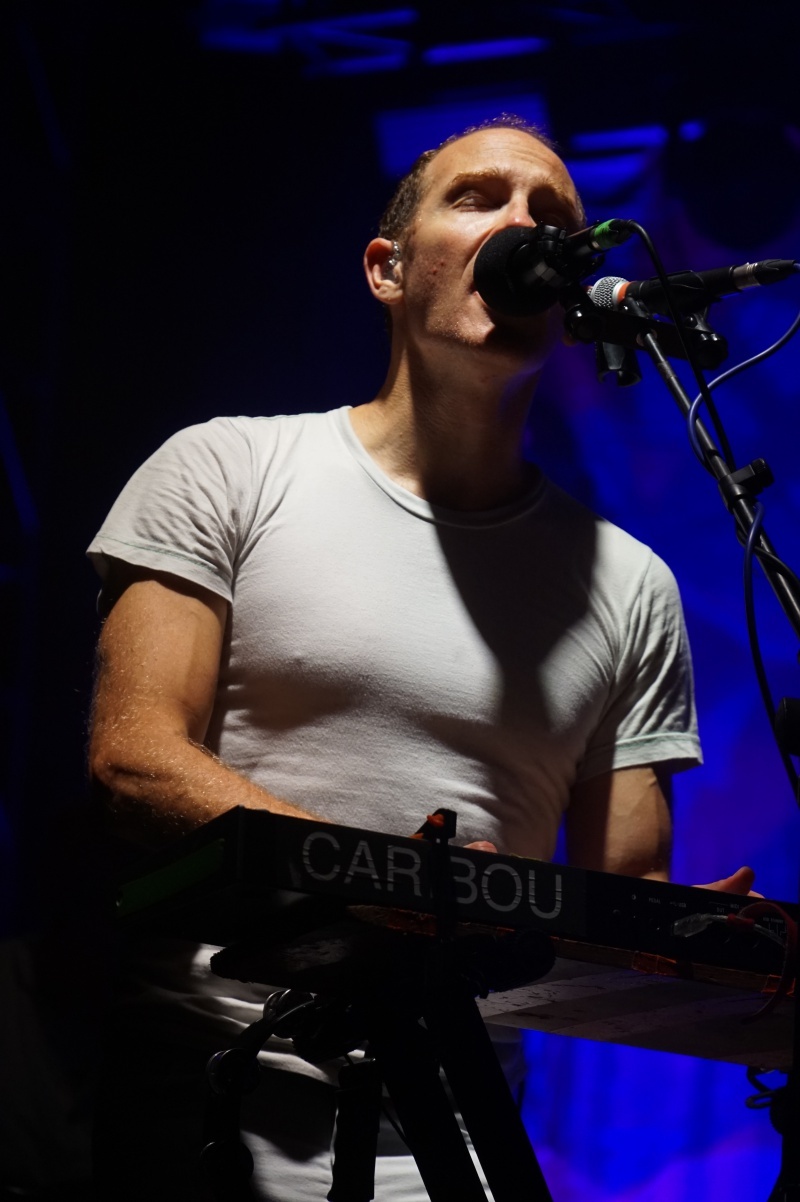 Dan Snaith, the brain of the Caribou and Daphni projects, closed Neon Lights 2018 brilliantly with his soulful and mind-bending handle on electronic music. The Canadian musician showered the main stage with his signature idiosyncratic sounds which translated as fast, intense movements from the audience. His colourful and brightly lit set-up was the perfect accompaniment to his tracks and left everyone feeling elevated.

Festival memories last a long time and those that we collected at Neon Lights 2018 will definitely endure. As always, see you at the next one.