The first round of Neon Lights' line-up announcement was already quite a gargantuan feat — the mere mention of Damien Rice alone set a barrage of ecstatic tweets all over, while the debut of the recently-reunited shoegazers Ride showed the festival's keen propensity for getting some of the hottest acts in the touring circuit this year. It also marks the return of several high-profile indie acts, like Mercury Rev, singer-songwriter Sun Kil Moon along with funk/disco act CHIC among others.

The first round was already a terrifically balanced and appealing lineup that sent fans to buy Early Bird tickets that have since been sold out. Now this time, Neon Lights has upped the ante with a second round of acts, that prove a stronger case on why you probably can't miss out on their debut at Fort Canning Park.

Seriously though, get on Bo Ningen if you haven't.

The addition of Rachael Yamagata is the most surprising though, marking her second appearance here this year, after yet another successful show at Esplanade Concert Hall, a place, in all likelihood, is her second home — this will be her seventh appearance locally. We're sure fans now are even more excited at the prospect of watching her in a different environment. Neon Lights continues their admiration for the region by adding in Singaporean indie pop band Lost Weekend and eclectic Indonesian collective Mocca.

Look out for our full, comprehensive guide to Neon Lights very soon, with more details on the festival's arts programme. In the meantime, weekend tickets are currently on sale over at SISTIC and EventcliQue, with discounted prices available for patrons aged 17 and below. Single-day tickets will be made available from October 13.

Neon Lights is happening at Fort Canning Park on November 28 & 29.

UPDATE: We've received word from Neon Lights that this is not the final line-up announcement, with even more acts revealed soon. Exciting times! Who else do you think will be added before the festival's debut in November? 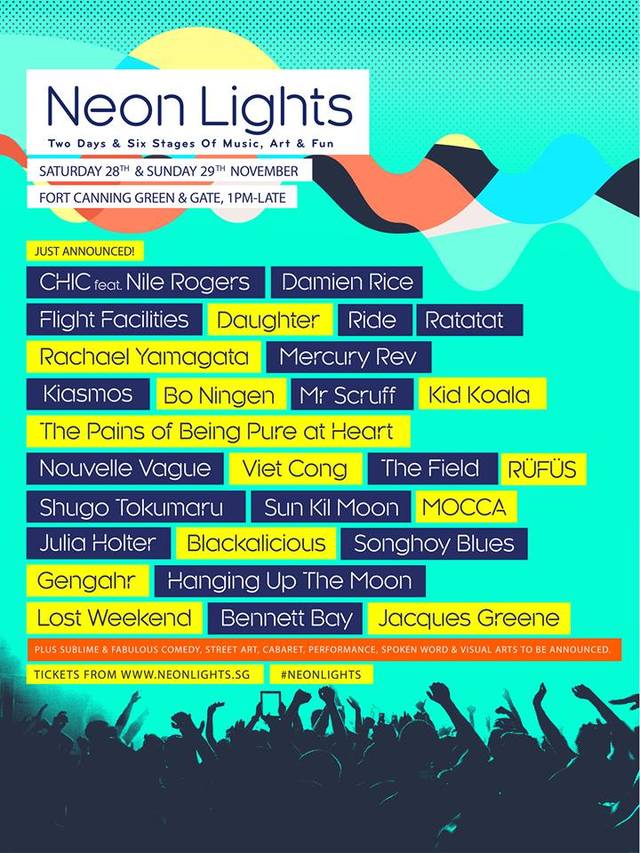