An $11 cab ride. Bah. It’s an art festival, they said. There will be music and fun things, they said. Where have you been sia, they said. Nevermind my absence for the last 7 years on this island, this annual event was where art and culture spill onto the streets and the huge area stretching from Cathay to Armenian Street turned into a playground for the artistically inclined. Museum crawl slash culture night activate! 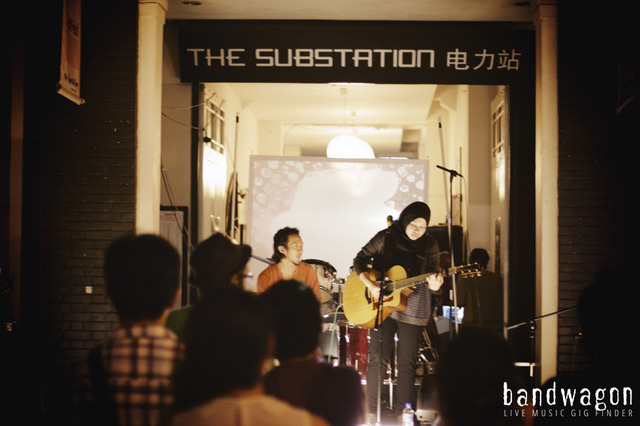 Like any other party, one must always find familiar faces. One must always strive to eradicate all stigma of social inept-ivity. Thankfully, as we arrived at The Substation, there were a few. Even better, everyone looked nice enough and at ease that nervous tics and unwieldy helloes did not have to arise. Seyra was already playing. A little sweet, a little dreamy, their reliable indie-pop was satisfactory warm up to the rest of the instalments this festival was about to offer. People milling about, some stopping to watch Seyra, some moving on to other artistic pastures. This is all good. 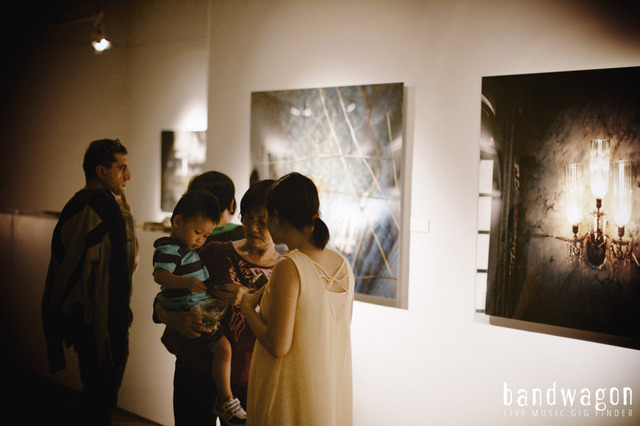 Slipping into Art Plural Gallery while everyone else was catching up after Seyra’s set, I came to the realization that this was not going to be a reticent affair. Aunties taking a respite from the humidity, children sitting on the floor, loud talking in front of the photographs, all of these happened. The exhibition called Sans Souci by Siddhartha Tawadey documented themes of urban decay, nostalgia, and fantasy – bit hard to take in when there was someone behind me talking about manipulative classmates (sorry I didn’t mean to eavesdrop). 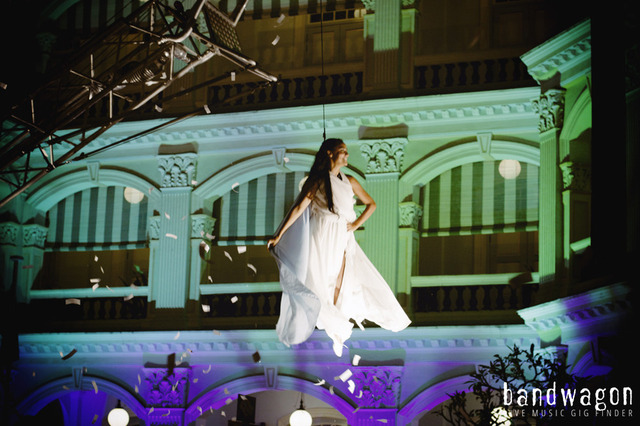 I was giving the exhibition another go when I heard the resting aunties go ‘WAH’ and the beating of drums. A then a crane rolled out on Armenian Street and there was a girl suspended in the air and a lot of glitter and soon I was also saying ‘WAH’.

Now there is confetti and the girl is flying around. With rope attached of course because safety first. Cool.

Moving inside the Peranakan Museum. The excitable aunties were getting uh, excited watching the confetti lady. No hate here though, in fact, I think it’s cool that the aunties come out for cultural events. Nothing outstanding was going on at the Peranakan Museum and I was quick to assume that it was another A/C haven for people who called it quits on sweat and sweating. Many wrapped themselves on the staircase banister to watch a samba dance, people were filtering in and out of the permanent exhibits, touching everything that was allowed to be touched.

Found a room with chairs and a sign that read: Kumar, 10 p.m. I suppose we’ll come back. 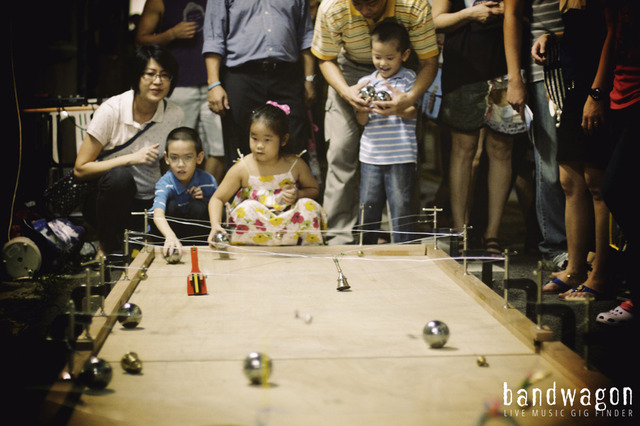 A mix of chain-smoking tendencies (not me), killing time till 10 p.m., getting away from rushy sorts and family sorts, we settled for the alleyway between the museum and Substation and look, more things going on there.

With fairy lights aka Hari Raya lights draping overhead and a reasonably peaceful vibe, you enter the alley and on your right is a mini petanque set up. Petanque, pronounced ‘pay-tonk’ is a French game of boules. That’s like a cross between bowling and Battleship, I’m trying to say that it’s quite strategic. That’s all I know, you can Google the rest on your own. This particular set up is an interactive sound art installation, so when the audience throws a ball, or ‘boule’ (these things are made of metal), it hits other paraphernalia – an assortment of mini cymbals, triangles and miniature instruments – it makes music. Musical petanque! Anyhow, it was entertaining to watch the audience participate, especially children.

Behind the petanque set is the Kurnia Putu Piring stall. Claimed to be ‘The Best One’, I’m pretty sure they are the only ones with peanut and durian putu piring. 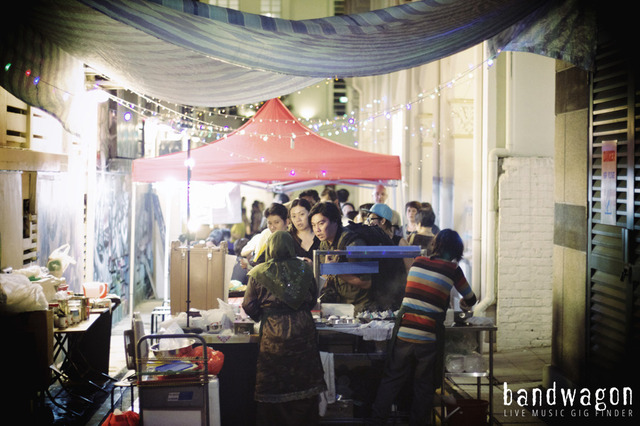 Watching The Zozi perform, I asked Ilyas what they were singing about. Cigarette in hand, he said “Maggi mee.” I usually do not subscribe to his wisdom but the words ‘pergi dapur, masakkan Maggi’ (go to the kitchen and cook some Maggi) repeated over and over so it was hard not to believe Ilyas. He wins this round.

Thirst-quenching time! We have found the food stalls at SMU but sure, quench your thirst at the inflated price of $2. Woe.

Five minutes late to the Kumar show and it was so packed that we were refused entry to the arena. Ah, more museum exploration I suppose. Or not.

Outside, the confetti lady was back. 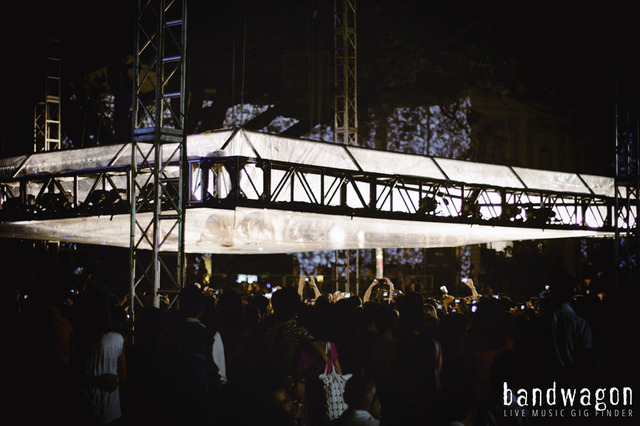 While The Substation held a more laidback atmosphere, the SMU Green was vibing concert arena all the way. Whoa.

Kevin Lester feat. Kiat and some Michael Jackson singalongs later, we witnessed a bizarre but captivating performance involving a 15 metre suspended pool and four dancers, in that pool. Whoa.

Anyone would notice the light projections on the museum buildings that night. As we crossed the road to SAM, we watched creepers and other forms of wilderness engulf the façade of the building. Spooky but definitely mesmerizing. Via art projections of course. 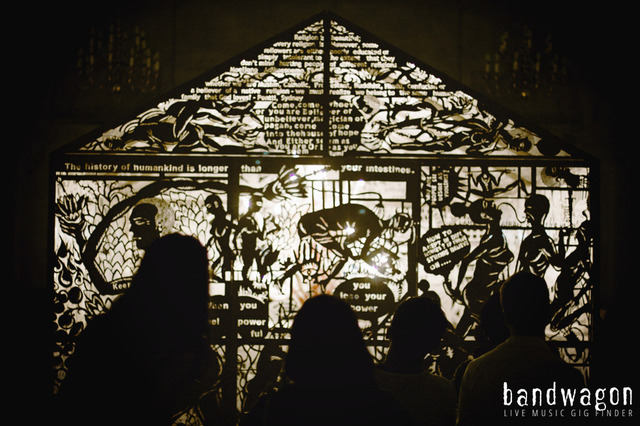 Let there be (a lot of) light! A stormy and haunting ‘Distorted Forest’ in the courtyard, the thought provoking but visually stunning ‘Temple of Hope’ upstairs and quirky giant lighted eyeballs at the SAM 8Q. All of the above were certainly highlights of the Night Festival.

Now culturally enriched, we walk past another light installation in front of SOTA on the way back to the office where we later find out we had been locked out.