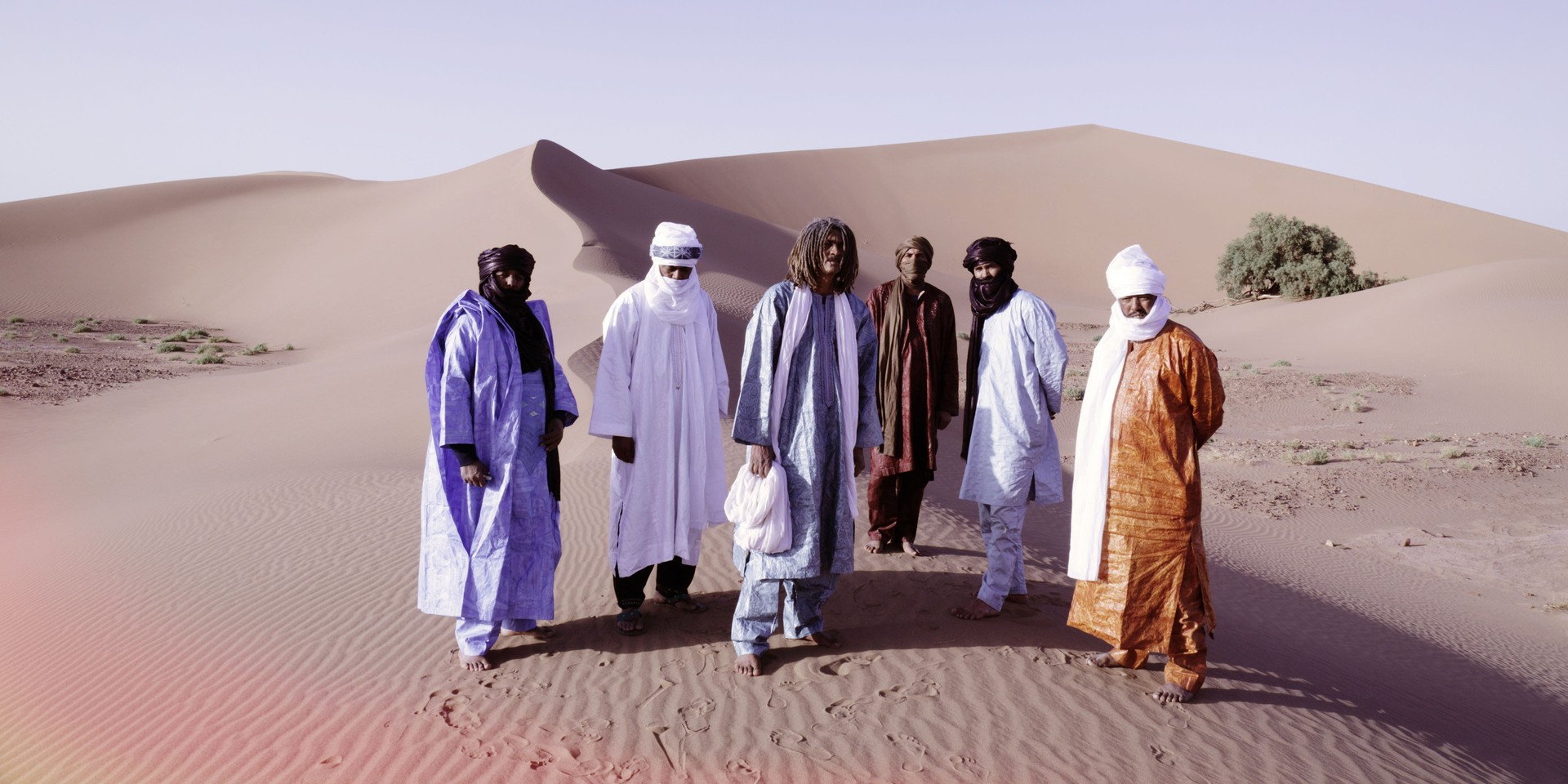 The music of Tinariwen is inextricably tied to its origins: within the rolling sands of the Sahara and the suffering, political and personal, of the Tuareg people within the turbulence of Mali.

Tinariwen hail from a Saharan mountain range between north-eastern Mali and southern Algeria, which has in recent years been turned into a conflict zone. A few of the band's members used to be Tuareg rebel fighters, with some participating in the Tuareg uprising against the Mali government in 1990. Involvement and entanglement in geopolitics has defined Tinariwen throughout the band's decades-long existence, continuing as the group gained a higher international profile in the 2000s and beyond – in 2013, Abdallah Ag Lamida was kidnapped by Islamists in northern Mali, and was held for 10 days before he managed to escape.

It's no wonder then, that band member Abdallah Ag Alhousseyni tells Bandwagon via email that "our job now is to play music, not to hold a position in politics... this way is too dangerous for us." Tinariwen tell their stories in guitar licks and lines that bear the influence of Jimi Hendrix and Bob Dylan, but what really lingers is the windswept melancholy that permeates their sound, which the band have taken to describing as "Assouf", which loosely means "nostalgia".

Ahead of the band's highly anticipated show in Singapore this weekend, read our interview with Abdallah about Tinariwen's new nomadic touring lifestyle, their latest album Elwan and the messages they carry in their music.

You are a very nomadic band and you’ve had to change bases multiple times because of the political unrest in Mali. Where is Tinariwen currently based, and how do you choose where to settle (temporarily)?

Yes, originally our population is nomadic for sure, it was more of a pastoral nomadism. For now, the band is on tour and it is a new way to be! The situation is not easy for us back home, especially to come back to or to leave for a tour. However, our hearts belong in Mali and we will always go back to our camp site.

Singapore is a small island, and a lot of the sand on our coasts is imported from other countries to make our landmass bigger. The Sahara desert is your home, where (to say the obvious) the sand is abundant and beautiful. How has the desert shaped you, spiritually?

The inspiration of our music comes directly from the environment we live it. Heavily influenced by the traditional music of our nomadic tribes. Our rhythms are marked by the camels' different walk! The poesy is an ancestral practice we used for the past 40 years with some modern influences and tunes from guitars, drums, etc.

Everything we have to say is how our population is suffering, not only in our homeland but the greater population of the world.

What music does Tinariwen listen to? Do you listen to music that’s very different from what you make, or do you listen more to Assouf and Tuareg music?

A lot of traditional music, all people from our community grew up with this music. Traditional Tuareg music holds a very important place in our lives. As you know Assouf is our music style, with the essential sentiment of [nostalgia], as melancholy.

Tinariwen is no stranger to political violence and unrest; you’ve spent time in refugee camps and been refugees yourselves. What do you make now of wealthy nations’ conservative and often fearful attitude towards refugees (from Syria and Myanmar, among other places)?

Unfortunately we can not do too much thing apart from playing our music with impactful lyrics. Coincidentally, some messages directly associate to these causes. Our job now is to play music, not to hold a position in politics…this way is too dangerous for us. We could only respect the story and never forget the problems of the world!

Looking at the headlines, the political situation in Mali is still worryingly unstable. Are you able to keep track of what is going on when you go on tour? Or do you take touring more as an opportunity to free yourself of these worries?

For our community, the rules of Tinariwen are to show our cultures and valors in the world, simply, as we are. All we have to think about is to pave a good way for the future generation.

Elwan was released more than a year ago. How do you feel when you look back on the album?

We are still very happy our latest record and the amazing experience that went into recording it. Elwan has definitely motivated us to work towards our next recording sessions soon! The issue is always to find some new inspiration and also the [technique], the strategy to find some trance in our music, with all messages focusing on the issues of the world.

Tinariwen will be performing at the Esplanade Concert Hall on 24 March 2018. Tickets are available here.