In Singapore itself, internet service providers M1 has confirmed that they had indeed disclosed customer information to a local law firm regarding the alleged illegal downloading of the movie. This comes after M1 subscribers took it to the interwebs to question the nature of a threatening letter from a local law firm Samuel Seow Law Corporation, who specialises in media law, stating that they were acting on behalf of their client, Dallas Buyers Club LLC.

The other two major telcos, Singtel and Starhub will be following suit, despite Singtel outrightly refusing to reveal customer information at first — even appointing external counsel to further their case. Alas, they too have to comply, and by law, the companies are required to release the names, NRIC numbers, and addresses of the downloaders by the end of the month.

The official trailer of the 2013 film Dallas Buyers Club. The studio behind the film, Voltage Pictures, is seeking damages allegedly caused by illegal downloading.

This case rings all too familiar for us who witnessed the ODEX debacle back in 2007-2008. In a nutshell, ODEX, a locally-based distributor of anime programmes, did the same thing that Dallas Buyers Club LLC is doing now — compelling telcos to release customer data through forceful subpoenas, in order to track users who downloaded programs of which that they owned the rights. They sent letters demanding payment to the offending individuals and many of them settled out of court — with one individual as young as nine-years-old.

So let’s get acquainted with all the parties involved here. Dallas Buyers Club, the movie in question here was made on a USD$5m budget and raked approximately USD$55m at the box office. Two of the actors also went on to win Oscars. Seems like a success story already, but looks like that’s not enough. Dallas Buyers Club LLC, the company that owns the rights to the movie are going on a rampage to take down downloaders… worldwide.

Engaging in technology from German company Maverickeye, Dallas Buyers Club LLC managed to track down Internet Protocol (IP) addresses linked to the downloading of the film in April and May last year.

Still, it’s an uphill battle for Dallas Buyers Club LLC, and their tactics have been pretty questionable.

For a start, the number of alleged infringers are relatively small. For Singtel, the numbers are approximately 150, compared to Australia where the personal details of almost 5000 users were handed over but Dallas Buyers Club LLC have not pursued two of the biggest ISPs Optus and Telstra. So not to incur even more losses in their rampage perhaps? This selective move only make their agenda even more shady. Why target the smaller ISPs in Australia?

Their move to issue subpoenas to Singaporean ISPs may be a flimsy reflection of their scheme in Australia — targeting the smaller companies in what appears to be an almost subjugating move by the Voltage Pictures-owned US company. Here, they’re targeting most of the ISPs in our relatively-small island. So far with these ISPs already ready to comply soon, more people will be receiving these intimidating letters in their mail.

Why target offenders? And why now? Considering this film has been out since November 2013, with its DVD release a few months after, it’s a sauntered move that’s highly suspect. Especially with a film that profited in the box office, won major awards and earned additional revenue through home video sales.

This case is slightly different from usual “corporations vs. the people”, like the amount of record labels and Hollywood studios that have brought lawsuits against individuals. This studio, Voltage Pictures, is an independent corporation and smaller than entities like Paramount Pictures or Universal Studios. However, their extensive actions that are reaching as far as our country shows that they already have pretty substantial backing.

Voltage’s vice-president Michael Wickstrom said on CNET AU: "All I request is that our local attorneys send a warning, because I don't anticipate a settlement from them except a warning. This is truly not about the money here, it's about stopping illegal piracy,"

If they’re truly not seeking settlements and only using these letters to scare downloaders away from their consuming habits, why go through all the trouble? The amount of money spent just to hire attorneys, issue subpoenas — all in different countries. For an independent studio, it doesn’t make any financial sense, no matter how much backing they have. 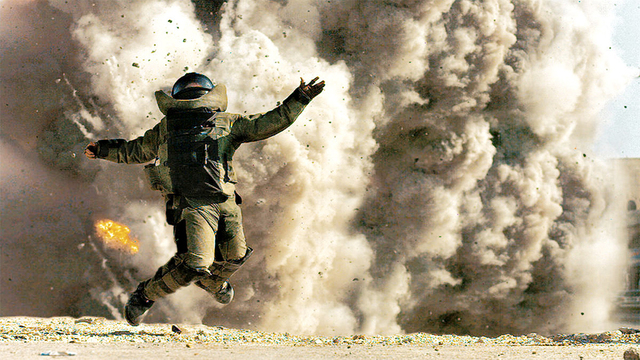 A still from the 2009 film The Hurt Locker, also produced by Voltage Studios. The company filed a lawsuit against 2,514 individuals in Florida for illegally downloading the movie.

Alas, as it turns out, this company already has a history of suing downloaders — a notable lawsuit surrounding their 2009 Oscar-darling hit The Hurt Locker in 2012, where they received undisclosed settlements out of court from accused individuals in the US. They also began chasing downloaders of Dallas Buyers Club in April last year, in Chicago and other US states. Voltage Pictures' CEO, Nicholas Chartier, claimed that after the announcement of their Hurt Locker lawsuits, the percentage of illegal downloads of the film decreased by 40%. This is despite the fact that his claim is not backed by any real figures.

While all of this is enough to show that the studio, in fact, really just wants more money from people, this is still another case in a history of corporations fighting in their struggle against piracy, which has been enhanced as technology evolves.

When we download, we fail to realise the consequences because it’s thoroughly convenient to acquire, in our own bedrooms with no one watching. It’s an issue that pervades not just the film industry but also the music and gaming industries, as we've covered before.

Calling it a convenience problem could very well be the most apt, with services like Spotify, Steam and Netflix in their respective industries serving the needs of a tech-savvy generation with affordable prices and instant gratification. It’s not the most perfect solution to combat piracy but that’s the problem — piracy will always be around. There will always be people who can’t afford or don’t want to shell out the money for a film or an album or a video game.

Protecting copyright is a highly critical issue but doing so by hitting the lawsuit hammer on average citizens, it promotes a worrying attitude of intimidation that soon, more companies may start utilising. For Voltage to actually create fake BitTorrent files of the film in hopes of tracking downloaders, it becomes an even more vile practice — one not so much about protecting copyright as it is about taking advantage of it.

As we await for more details of Dallas Buyers Club LLC's actions locally, if any of you are waiting for letters or if you think you might be in trouble, contact us at bandwagon@bandwagon.sg with your story.