One wouldn’t expect to go to a gig for a lesson in ornithology. But here I am on Wednesday night in the Esplanade Recital Hall learning about the Tui (pronounced Too-ey) birds of New Zealand. A longtime fan of trivia, I learnt that Tui birds possess two voice-boxes which allows them to produce sounds that are an incredible combination of cackles, clicks, groans and wheezy sounds.

Clearly Jo Hamilton is a fan of them, not only imparting her knowledge on these birds but also sampling their sounds on her track ‘Paradise’. For a folk musician, Hamilton incorporates a lot of new technology in her music. Besides the obvious AirPiano (which we will be talking about soon), there is a MacBook on the set, programmed sequences, sampled voices and atmospheres and a backing track – as the rest of the band could not be there. This and Hamilton’s soaring, unequivocal voice come together to form something so quiet and so powerful.

The elusive AirPiano. What is it? How do you play it? Why is Jo Hamilton synonymous with it? 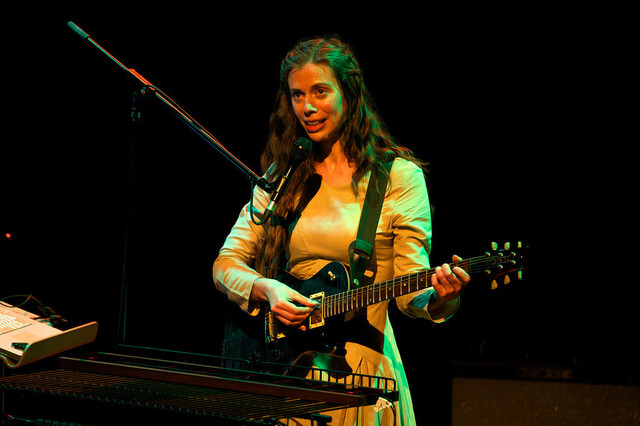 Invented by Berlin-based Omer Yosha, the AirPiano is a touch-free, sensing gestural music controller. Shaped like a plank, it has an interface which is activated and controlled by moving a hand in mid-air above the flat display surface and within range of a sensor array matrix. Driven by custom software, the AirPiano can put a library of tones and sounds at the player’s disposal.

Enter Jo Hamilton who came across a prototype demonstration on the web when she was looking for a new instrument to pick up. She approached Omer Yosha directly and somewhere, found herself being the main endorser of the new instrument.

With so many things to manage at once – backing track, electric guitar, AirPiano – Jo Hamilton is a temple of peace. She is absolutely still most of the time, aside from using her hands to work her magic on her instruments. There is no Whitney Houston theatrics for this lady even as she pulls off the high notes. So effortless but with so much feeling, she shuffled through over an hour of folk songs, songs that tapped into the intricate language of heartbreak, a song on knitting – when Jo Hamilton sings, you really sit up to listen.

“You know how it works?” she says to the crowd as they watch her hands move in a Tai Qi-like manner over the AirPiano. “Magic.” And magic was my evening with Jo Hamilton.