It's been a while but come 18th December, Caracal officially launches their second studio effort Welcome the Ironists. The band has played shows constantly since the release of their debut album Bear. Shark. Wolf., a record best known for its unflinching aggressiveness balanced with a strong sense of melodic and accessible structures. Ever since being signed to eclectic record label KittyWu Records, the band has been hard at work producing what they call their "most cohesive and affecting album to date".

Being an album-centric band certainly requires a healthy dose of record-spinning; taking time to sit down and listen to records made by other artists, learning the many elements of what it takes to create a well-recorded album. We decided to put some of the band to task and find out the albums that inspired Welcome the Ironists, the ones they wish they made and the ones they'll never listen to again.

THE RECORDS THAT INSPIRED OUR OWN 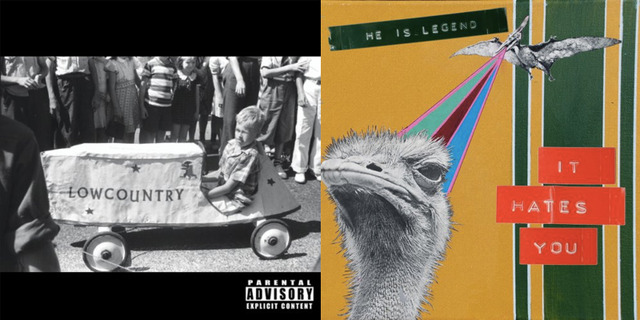 Envy on the Coast - Lowcountry

He Is Legend - It Hates You

Martin (drums): That record is a timeless southern-psychedelic rock masterpiece that all of us dig a lot.

THE RECORDS WE JAM AT 2AM ON THE ROAD

THE RECORDS WE DON'T WANT TO HEAR EVER AGAIN

THE RECORDS THAT NEVER FAIL TO MAKE US CRY

Brand New - The Devil and God Are Raging Inside Me

The Records That Make Us Proud to Be Singaporean

Jude (bass): The most Singaporean band without the cheese but more of the furious ska-punk beats, fun melodic vocals and a riot of a personality as a whole band. Definitely makes me proud as hell.

B-Quartet - Tomorrow is Our Permanent Address

Martin (drums): This album, along with The Gift, are truly inspiring records by two inspiring bands.

The Records With the Most Secondary School Feels

Funeral for a Friend - Casually Dressed and Deep in Conversation

Rage Against the Machine - self-titled

Jude (bass): I first heard this album when i was 14 and never looked back on heavy music ever since. I was blown away by the aggressive melodic riffage from Tom Morello combined with Zack de la Rocha's groovy rap vocals. It spurred me to be a better guitar player, musician and rebellious student.

The Records You’d Least Expect Us to Listen to

Mac Miller - Watching Movies With the Sound Off

The Records We Wish We Made

Thrice - The Illusion of Safety

Jude (bass): Personally, every single song on that album was perfect on every level of feels and music. Every lyric, melody and riff were ahead of their time when they wrote that album I believe.

The Records That Scared Us As a Child

Enya - Paint the Sky with Stars

Incubus - If Not Now, When?

Emery - We Do What We Want