Unless you've been living under the world's densest rock, you would already know Taylor Swift is currently the biggest pop star in the world right now and if you're reading this, you're probably considered a Swiftie already. She's just released a brand-new album plainly titled 1989 (no extra points to guess what it refers to) and she's been breaking chart after chart across continents. Moving away from traditional Nashville into the metropolitan streets of New York, she's left whatever country pop that was in her behind to embrace shimmery synths and twerking...and it works.

We're pretty sure you guys have been excited with Taylor Swift's new direction but you'll be even more excited with what we have in store. Courtesy of Universal Music Singapore, we have five sets of Taylor Swift calendars and t-shirts along with ONE Deluxe Edition CD copy of 1989 to give away. We heard all of her albums have unfortunately been taken off Spotify so if you want to blast her new album on max volume, might as well get an actual physical copy which includes three bonus tracks! 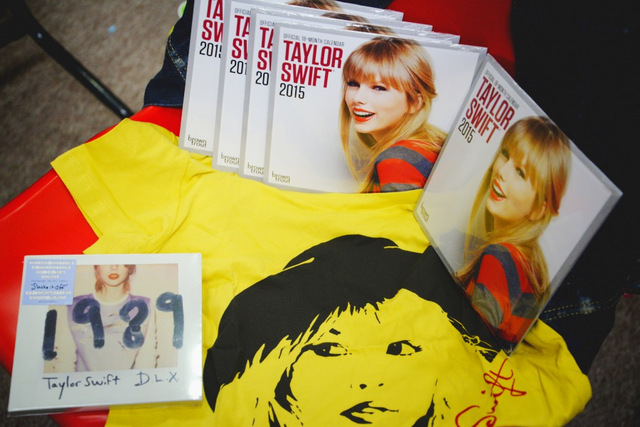 It's simple: we want you to recreate the 1989 album cover with you in it. It doesn't need to be an actual polaroid but you'll have to send in your most creative reinterpretation. Send your entries to us at bandwagon@bandwagon.sg in JPEG format. Contest ends Monday, 10 November.

Of course, if you're not a CD person you can always grab a digital copy of 1989 over on iTunes!