Big, loud and colourful – that was the Pet Shop Boys show at Resorts World Sentosa last Saturday in a nutshell. The British synthpop duo were here to perform as part of the Asian leg of their Electric World Tour. Headscratching choice of venue aside – a ballroom in a casino all the way in Sentosa? – it was an all-out 80s extravaganza featuring dazzling visuals, lasers, funky costumes and two energetic dancers who seemingly never stopped moving. The crowd was a mix of middle aged folks, gay dudes, and a smattering of 20 and 30-somethings. Interestingly enough there were quite a number of families in attendance as well.

Kicking off with lead single 'Axis' from their latest and 12th studio album Electric, it was the start of an exhilarating ride through their discography. The vibe seemed subdued though and just when I feared it was going to be a boring seated affair, the band launched into 'Opportunities (Let’s Make Lots of Money)' and that finally got the crowd off their bums and dancing. Noticing people running to the front, my friend and I followed suit and joined the throng on the right side of the stage where it was much livelier. Score one for atmosphere. 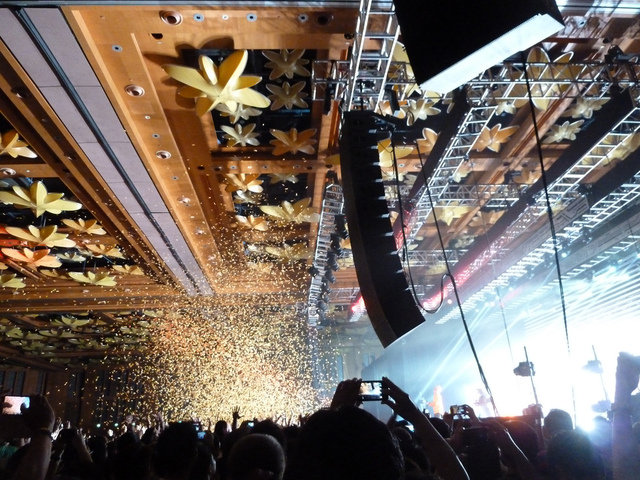 Nostalgia was the order of the day and the energy level during the 100 minute show rose and dipped according to the songs; the crowd was relatively quiet during their lesser-known tunes and went crazy for the hits. It was the hits everyone had come for and the Pet Shop Boys duly delivered them. The crowd came alive when the band broke into the catchy 'Domino Dancing,' the anthemic 'Go West', and the dark disco of 'It’s a Sin', cheering and singing along with gusto. Neil Tennant’s nasal voice was in pristine condition as he pranced around on stage while Chris cut a stoic figure on his left silently commanding the keyboards.

Neil played the part of flamboyant showman with relish, purring deliciously as he paraded around; crisp English accents and campy antics are a fantastic combination. The duo underwent several outfit changes and had on everything from punkish spiked jackets to shiny neon suits to orange jumpsuits. And the disco ball hats, man those were rad (see photo below). Props to the dancers as well – they sported awesomely freaky minotaur headgear during 'Suburbia' and were clad in furry costumes towards the end, giving them the appearance of giant bouncing balls with legs. 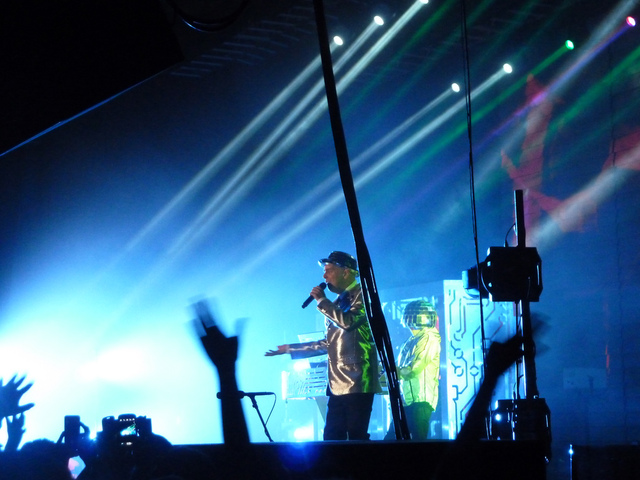 The band had saved the best for last and the room erupted into cheers at the opening strains of their 1984 classic 'West End Girls' followed by the club-friendly 'Vocal'. All too soon the show came to an end and after thanking the crowd and wishing everyone a happy national day, the duo departed and that was our cue to leave too. I joined the masses filing out of the room, my head swirling with music and dancing and laughter from a supremely entertaining evening.