Take all the gig experiences you have ever had and deconstruct that. There's the walking into the venue part, the going with friends bit, the getting an Instagram-worthy shot, the band actually playing, singing along, the part where the frontman/singer shoves the mic to the crowd to sing the chorus, the lights, a picture of the lights, the encore, and then everything is done within an hour, or slightly more. The standard structures that make up your gig experience.

Wednesday night at Phoenix; we saw the dissolution of the culturally dominant structure of the gig-going experience. Venue: the elephantine Star Performing Arts Centre, not located in the usual central postal code of nightlife in Singapore. Yet from the mass of people outside Jamaica Blue before heading into the auditorium, being located in the West side did nothing to deter the crowds from coming. Although a seated venue; but was anyone in their seats once the lights dimmed for the indie rock band from Versailles? Nope, not at all. Breaking out from whatever seating arrangement one held prior to the concert, everyone joined in solidarity to enjoy Phoenix, up close and later on, personal.

That setlist was created perfectly to make everyone in that (big) room happy. Phoenix kicked off majestically with a hat trick of their most loved songs – the insanely catchy ‘Entertainment’, ‘Lasso’, and ‘Lisztomania’. By the second song, Mars had no qualms about immersing himself in the crowd. This got messy and a little wild later on, as the band worked through a delightful setlist that included some mash-ups (‘Too Young’ and ‘Girlfriend’ morphed and ‘Trying To Be Cool/Drakkar Noir/Chloroform’), tracks that had amazing visuals to accompany it (‘Love Like A Sunset PI & II’ + ‘Bankrupt’ and ‘Rome’) and also songs from the very first album they made. 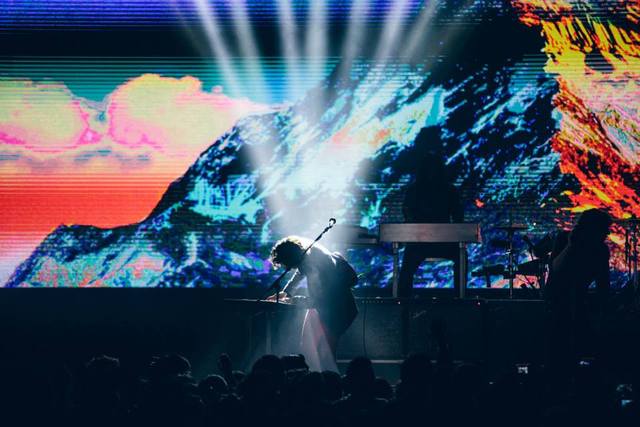 There was no need for costume changes or gimmicky confetti and fireworks to hold the attention of the people. Everything Mars and the band pulled off left everyone feverish and excited. Walking through the auditorium, Thomas Mars braved some hand grabbing, butt-touching, hair tousling, surprise hugging action and came out looking like he thoroughly enjoyed it. Although most of the night was fun and full of energy and stellar showmanship, it was the stripped down performance of ‘Countdown’ during the encore that was a highlight of the show. Contemplative and less raucous than everything else that night, that even got the dude in front of me to take out his lighter (don’t bro).

Pluralism and eclecticism in a setlist/set? They nailed it. 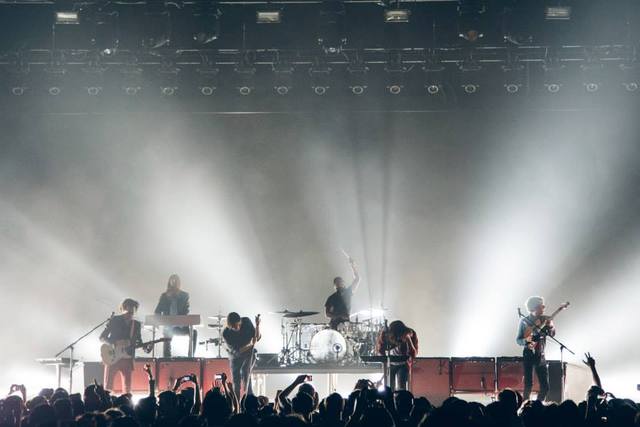 And when talking about postmodernism, who could be a better spokesperson than the band themselves. Often quoted in interviews saying that his lyrics on the surface, may seem like gibberish, frontman Thomas Mars presents multiple meanings and temporalities in his music that he encourages people to interpret for themselves. Take the track ‘1901’ for example. According to Mars, it is a ‘fantasy song about Paris’ because ‘Paris in 1901 was better than it is now’. But looking at the faces around me, some with eyes closed and singing, some looking like they’ve won a bunch golden tickets, it was clear to me that these songs met something special, yet different to everyone.

After a spectacular performance of ‘Rome’, and as Mars was doing his thank you’s, you would think: this is it, it’s the end of the concert, and you would probably start planning your supper with your girl/guy/friends and planning how to go home and with who. But came the magic words: “Everyone come up on stage!” and I watched the world around me turn into ecstatic chaos. Ushers were helping people up the stage, things were being autographed and photographed and for the first time, I witnessed people taking selfies without nausea.

And thus, that concludes my postmodern listening experience at a giant auditorium in Clementi. Watching Phoenix live did not just repudiate or extend the structuralist experience of gig-going, but had set new standards - pretty apt for the first big gig of 2014. 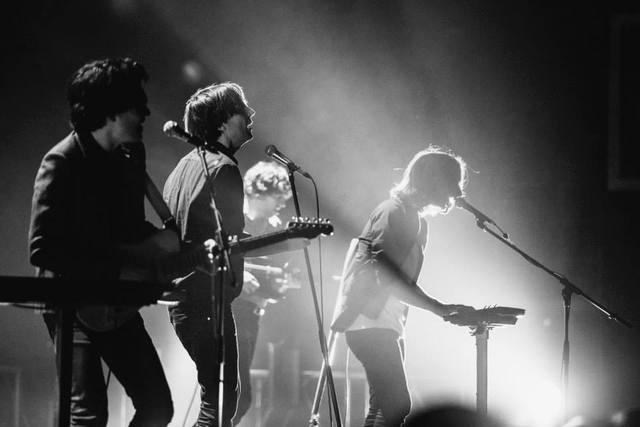