In a surprise treat for thousands of Wanderland festival goers tonight, Karpos Multimedia announced the return of French alternative rock band Phoenix - vocalist Thomas Mars, guitarists Christian Mazzalai and Laurent Brancowitz, bassist Deck D'arcy - to Manila later this year. After their first sold-out headlining concert in January 2014, the band is coming back on August 15, this time, to perform at a much-bigger venue - the Araneta Coliseum.

UPDATE: Phoenix Live in Manila has been moved to the Kia Theatre.

Countdown unless you're excited for @wearephoenix — stay tuned for ticket details! pic.twitter.com/V7hFaXP0cB

I met Phoenix and ended up on their Instagram

Phoenix unveiled a new logo and show dates for New York, Los Angeles, Paris and London, along with a peek of their new material, earlier this week, hinting at what could be another world tour for the Grammy-award winning French band.

The French quartet previously announced a string of festival show dates across Europe and Asia (including Summer Sonic, Sunny Side Up Festival, and We The Fest), but so far, the Manila show remains to be their only solo concert in the region. They are said to be finishing their sixth studio album, the follow up to 2013's Bankrupt. 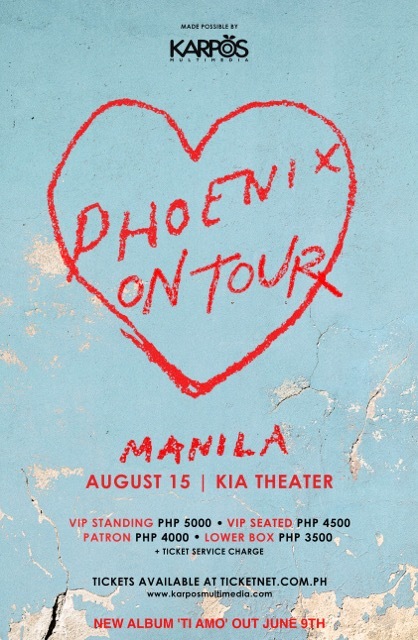 Watch Thomas Mars sing a stripped-down version of 'Countdown' in a sea of screaming fans and smart phones at their last show in Manila:

Phoenix Live in Manila is presented by Karpos Multimedia.