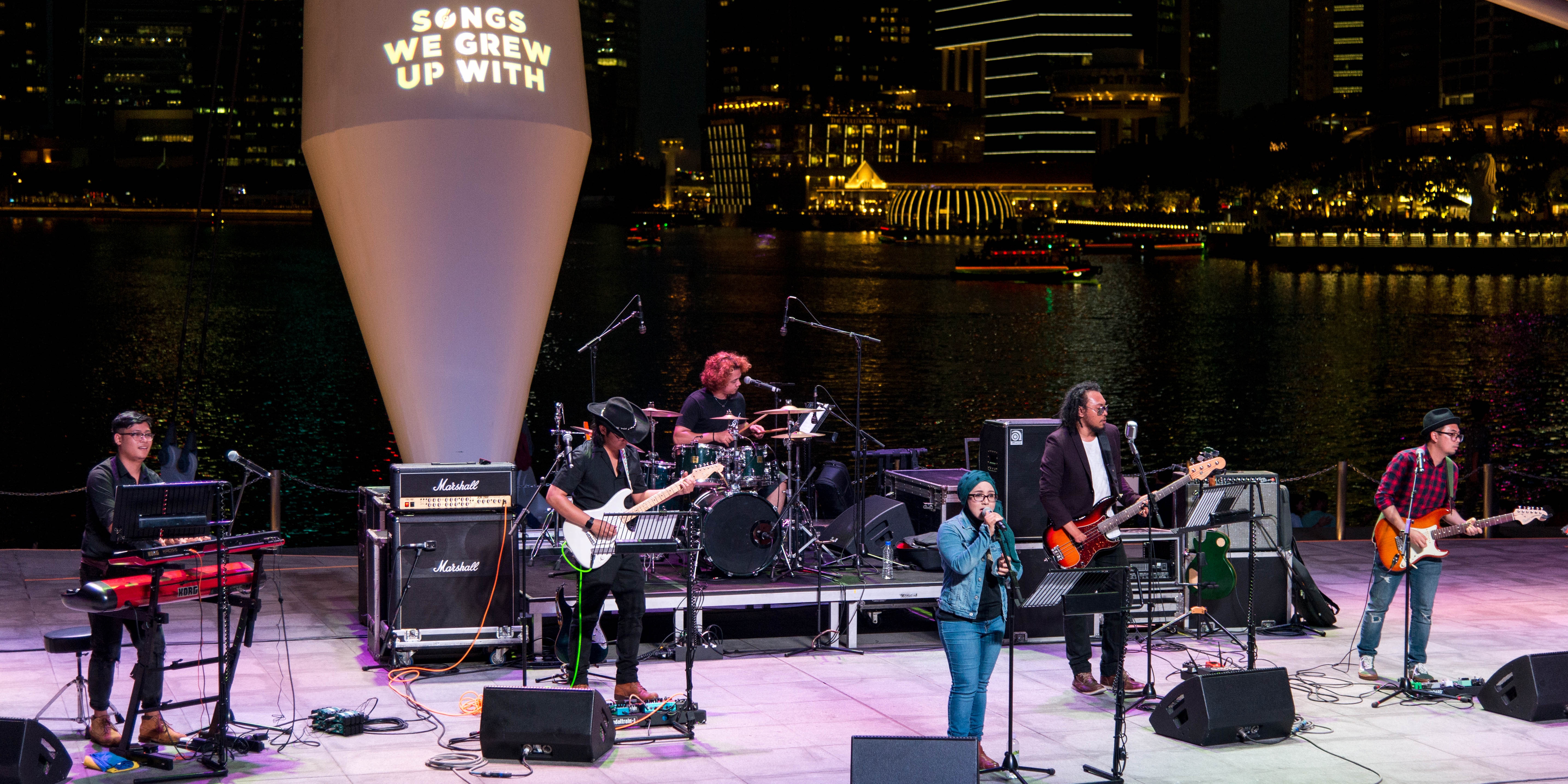 On Saturday, 11 May, Pink Saturday graced the stage of the Esplanade Outdoor Theatre to deliver their renditions of classic hits for the Esplanade’s Songs We Grew Up With series. Their set included hits from the likes of Joan Jett, Aerosmith, The Beatles, and more. The band played three sets to a packed venue, and it was no doubt a loud and dynamic show.

With this being their third time playing at the Esplanade, the first two being tribute shows in honour of the late P. Ramlee, we sat down with Hafizah for a quick chat about the band’s musical journey so far.

Tell us more about yourself and Pink Saturday.

I'm Hafizah and I started singing solo after my Anugerah participation on the Suria channel in 2009. While I was making my second single, I realised that I did not really want to perform as a soloist. That was when I formed an acoustic band with my husband, who was back then still my boyfriend, and another friend of ours. We played acoustically for about ten years, but subsequently decided to form a full band because we wanted to explore a different side of the band. That was how Pink Saturday came to be.

Basically, Pink Saturday is a very fun-loving band, we just want to have fun and rock and roll. That's the reason we chose Pink Saturday for a band name – Pink is a very happy colour, and Saturdays are usually very chill after a long week.

It is so different from our P. Ramlee shows. For one, we played the P. Ramlee shows at the Concourse, where the sound is very limited. This time round, at the Outdoor Theatre, we can play however loud we want and, you know, blast it off! The energy is different too; you get to interact more with the crowd. Like I mentioned earlier, we also have a full band backing us now, so we are very happy with that!

How did this show come about? What's the rationale behind taking up this show?

Initially, we were just looking for people to jam leisurely with. We called Iann in for a jam, and we realised that we fit very well and the chemistry was really good. So we decided to record our jam sessions and try to see if we can get some gigs. We were then approached by the Esplanade to play for their Songs We Grew Up With series, which we thought was perfect. We've always looked up to the live shows of the bands we used to listen to, so why not let’s do the same? So, we feel very blessed to have the chance to play this gig.

Back then we were just an acoustic three-piece that played at pubs, restaurants, weddings and such. It was a little more intimate as a three-piece – A Cajon, an acoustic guitar, and vocals.

Now, we have added a bassist and keyboardist, and the Cajon was swapped out for a drum set. It's a different feel altogether. Acoustically, there are some songs for which you cut short certain parts of, such as the solos. As a full band, we are able to play full songs as they were made to be played and you get to explore more genres as well.

Finally, having been part of the local music scene for a fairly long time, what's one advice you would give to aspiring local musicians, especially for those who aspire to make music in their mother tongue?

Just believe in what you love doing, and have fun. Music is all about having fun and exploring, so don't limit yourself – Just go. If you feel that you like something or that you're good with a certain sound, just go for it. Yes, some people might have done it before, some people might not like it, but you also just might gain fans along the way. Just be yourself, be unique, don't copy others. When you're true to yourself, you'll get good vibes and people will slowly appreciate your art.