Record Store Day is in five days time! The event, which began from humble beginnings in the US back in 2007, has since exploded into a worldwide day of celebrating music and the art of vinyl. With its successful reception last year, Singapore will once again be giving the day the full treatment, from RSD-exclusive titles being released here to vinyl exhibitions, performances in record shops and groovy analog parties at night.

RSD has a long history of amazing exclusive releases but the most interesting ones have always been the many records which feature collaborations from many different artists. From remixes, splits to all-out collaborative affairs, here are some classic picks from past RSDs along with some that you need to get this year. 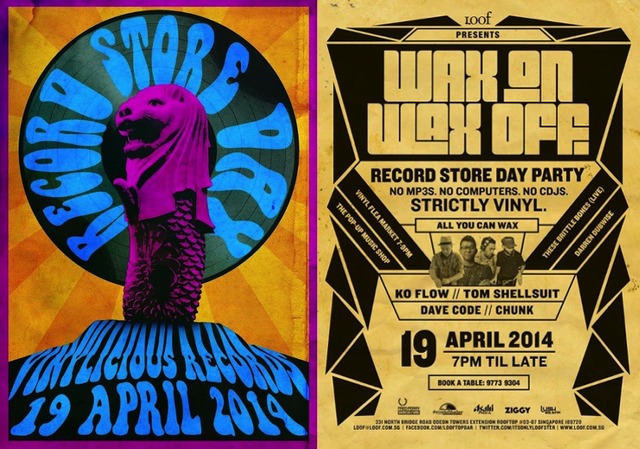 Drop by Vinylicious Records this Saturday and treat yourselves to some records! With a hearty list of RSD exclusives, there's a little something for everyone - from the 8-bit bleep bloops of Anamanaguchi's Scott Pilgrim vs The World videogame soundtrack to Opeth's mighty prog-death metal masterpiece Watershed.

Then drop by LOOF in the evening for an all-vinyl dance party with DJs Darren Dubwise, Koflow, Shellsuit and more in Wax On Wax Off! Also featuring a live performance by These Brittle Bones and Fred Perry + Ziggy's Pop-Up Music Shop, where you can continue shopping for records and other sweet merch.

This unlikely pairing set the curiosity of both fanbases alight. After all, one’s an indie rocker and the other's a modern metal juggernaut. Borne out of a meeting backstage after performing on music program Later…with Jools Holland, they flirted with collaborative ideas while on the road. The result was a 7'' split that featured each act covering a song by the other. Feist gave 'Black Tongue' an odd folksy twist while Mastodon cranked up the sludge to 11 with a blisteringly heavy cover of 'A Commotion'. The release caused a commotion (ha), especially within purist metal fans, but was overall received warmly. Copies were sold out quickly and now go for pretty exorbitant prices (for a 7’’) on eBay. Good luck finding one below US$20.

The Black Keys / The Stooges - No Fun

The classic song by the incomparable proto-punk legends The Stooges got a cool makeover courtesy of The Black Keys, back in 2002 when they were still fresh on the scene with their debut ‘The Big Come Up’. Now, both the original and cover will be pressed on orange and red sunburst vinyl, with only 7,000 copies. One kick-ass song. Two kick-ass bands. No further explanation needed. You know what to do.

Moody alt-rockers Manchester Orchestra have decided to release a 12’’ split, releasing two song collaborations with Scottish folk-rockers Frightened Rabbit and US indie quintet Grouplove. The two songs could not be more different; one’s an intricate acoustic track while the other is lavished with electronic synths, which makes this release only more fascinating. Judging from the online stream, the end result is nothing short of delightful! Add in some beautiful hand-drawn art, along with a limited run of 2,300 and you’ve got yourself a no-brainer purchase.

Remixes have become almost part and parcel of new releases lately, but with Nicolas Jaar at the helm you know it’s going to be special. He was recently enlisted by not only US indie-rockers Grizzly Bear but also legendary electronic music maestro Brian Eno to give their songs his own unique touch. Nico takes on Sleeping Ute, the opening track from GB’s latest (amazing) effort Shields while also reworking Eno’s 75-minute opus ‘LUX’. There haven’t been any streams available for the songs so we’ll have to wait patiently until 20th April but we know it’ll be nothing short of fantastic.

The Flaming Lips And Heady Fwends

Of course, how can we not include this? Definitely the most ambitious collaborative project in recent memory, The Flaming Lips went all out on this one. They picked out an array of artists from a breathtakingly wide spectrum; from Bon Iver, Edward Sharpe & the Magnetic Zeros, Tame Impala to Erykah Badu, Chris Martin and even Ke$ha to name a few (yes I’m serious). The end result was a whirlwind of impressive tracks that surprisingly flowed together well. For Record Store Day, the album was released in a limited quantity of 10,000 with each vinyl disc sporting a unique coloured pattern. Frontman Wayne Coyne even gathered blood donations from some of the artists on the album, which he used to press into the records in limited edition sets of the album. These sets were sold to fans willing to shell out the extra bucks (costing a cool US2,500 per set) and the proceeds were donated to various causes in Coyne’s hometown, Oklahoma. What a nice guy, Erykah Badu controversy aside.

Part of the Side By Side series, the vinyl will include the original version of 'Just Like Heaven' by The Cure and Dinosaur Jr's excellent cover which was previously released in 1989 (+ an original song!). This makes sense as frontman of The Cure, Robert Smith himself has gone on record to say that Dinosaur Jr's version is his personal favourite, and admitted that faster-tempo version has influenced how The Cure perform it live. Also according to Robert Smith, the song is about hyperventilating - "kissing and fainting to the floor." Pretty intense for what I thought was a sweet love song.

As roots rockers Dawes will be joining Bright Eyes frontman Conor Oberst on tour for his solo album, they have also made time to put out a split EP for RSD where Conor Oberst will set out to play Dawes' 'Million Dollar Bill' and Dawes in return will cover 'Easy/Lucky/Free' originally by Bright Eyes. Extra trivia, Dawes will also serve as the backing band for Conor Oberst for the tour. Again, pretty good teamwork there as Dawes will be able to capture the gentle, acoustic-based musical trappings of the music of Oberst.

A must have for all DCFC fans, this one is a keeper. Featuring a live double LP recorded in 2012 when DCFC performed with the Magik*Magik Orchestra for their tour. Even better the tracklist features songs spanning their whole career, which means you get to hear 'Passenger Seat', singalong favourite 'I'll Follow You Into The Dark' and 'Codes and Keys' on the same record. If anything, adding some strings, let alone an orchestra does wonders for the music of Death Cab For Cutie. Emo kids of the world unite this RSD.

In a delightful surprise that sees emo icons Sunny Day Real Estate working together with progressive/post-hardcore outfit Circa Survive, this RSD exclusive split is a limited pressing, with only 2400 records released in burgundy and only a 100 on clear vinyl. The track "Lipton Witch" will be the first ever release in 14 years by Sunny Day Real Estate, who released the essential emo albums Diary and LP2 back in '94 and '95 respectively, along with How It Feels To Be Something On in '98 and The Rising Tide in 2000 before breaking up. But how did Circa Survive get involved in the project in the first place? The story goes that Circa guitarist Brendan Ekstrom contacted Sunny Day frontman Jeremy Enigk with a proposal to release their B-side "Bad Heart", which had a "mellower vibe" could balance out the new SDRE track. Oh, and Ekstrom also mentioned that the new SDRE track is one of the best songs the veterans have ever written. Nice.

We're not ashamed to proclaim our love for (early) Linkin Park - we can still recite every lyric to Hybrid Theory if requested. 10 years after it was released to much fanfare (two of the biggest artistes in hip hop and rock in one mashup album!!), Collision Course is being reissued on blue vinyl for RSD which will also include a live concert DVD of the tour. Who could forget that awesomely fun Numb/Encore mashup? Get this one if you're feeling nostalgic for your chained-wallet, leather-cuffed, spiky-haired, FUBU-jeans days.