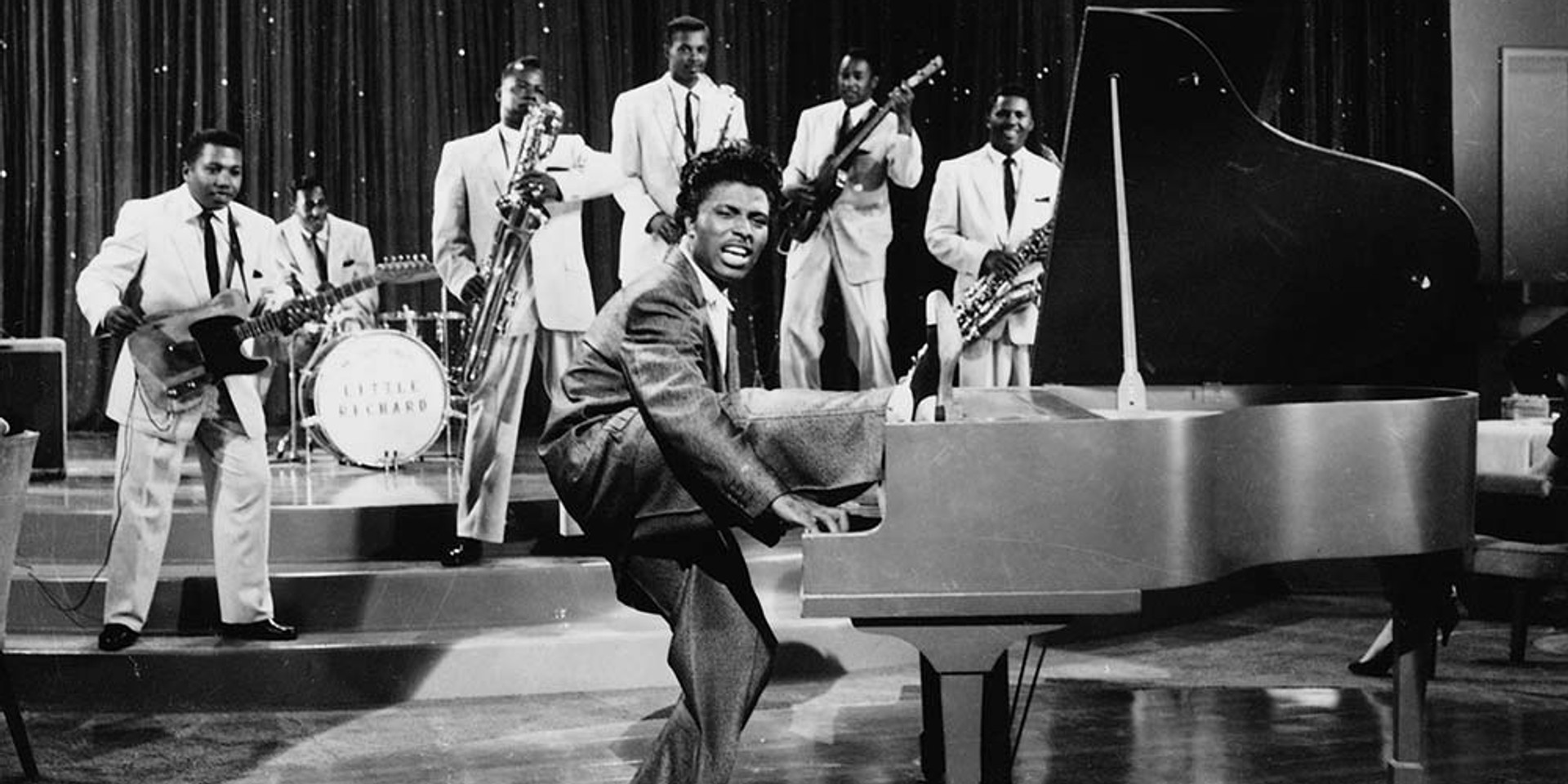 Legendary musician Little Richard passed away at the age of 87 on Saturday (09/05). We take a look at the man's legacy and the outpouring of love and admiration from his fellow musicians.

On 14 September 1955, record producer Robert "Bumps" Blackwell was in New Orleans, tasked with getting the best out of a relatively unknown young musician Little Richard.

After an unsuccessful morning of recording filled with frustration, the crew decided to take a break at a nearby inn. Free from the creative boundaries of the studio, the twenty-two-year-old Little Richard walked up to the piano and immediately commanded the attention of the crowd with a loud yelp, followed by what would become one of the most iconic lines in rock 'n' roll history:

In this anecdote documented in David Hepworth's Uncommon People: The Rise and Fall of The Rock Stars, Blackwell immediately knew at that moment that he had a hit on his hands. With the help of a local lyricist Dorothy LaBostrie, the crew quickly turned Little Richard's original bawdy lyrics into something more palatable for the mass market, and by the end of the day, his first major hit song 'Tutti Frutti' was created, and music was never the same.

While most of the younger generation may no longer be familiar with him, it is inevitable that they have enjoyed some form of music that has been influenced by his work one way or another.

In 1947, Little Richard was invited by "the godmother of rock n' roll" Sister Rosetta Tharpe to open her show after she overheard him singing while visiting his hometown. Receiving his first payment from Tharpe after this opportunity was what inspired him to pursue a professional career as a singer.

Facing multiple setbacks, Little Richard had made the decision to give up in 1954 and returned to his hometown to work as a dishwasher, but eventually found his inspiration again, signing for Specialty Records the subsequent year, where he would eventually find fame over the next three years at the forefront of the new rock 'n' roll wave.

On 12 October 1957, after a performance in Sydney, Australia, Little Richard had a shocking announcement to make.

At the peak of his career, Little Richard renounced the music he had helped to pioneer, and enrolled in college to study theology.

While he later admitted that his decision to leave his label at the time was more monetary than spiritual, Little Richard put his attention into Gospel music over the next few years, even releasing a Gospel album King of the Gospel Singers, produced by Quincy Jones.

By 1962, however, with the news that his records were performing well in Europe, Little Richard made the choice to return to rock 'n' roll with a series of tours across the ocean. In his time in Europe, he performed with several up-and-coming bands from the UK that were inspired by his music, including The Beatles and The Rolling Stones.

Throughout the next few decades, Little Richard continued to release new music and perform around the world. Respected by his industry peers and revered as a pioneer of rock 'n' roll, Little Richard never returned to the success he enjoyed with his earlier hits, but he would forever be recognised for the iconic songs of his early days.

In 1986, Little Richard was among the first-ever group of inductees in the Rock and Roll Hall of Fame. His first-ever hit, 'Tutti Frutti', was included in the National Recording Registry of the Library of Congress in 2010, credited for announcing "a new era of music".

Across his career, he would struggle with reconciling his religion with his beloved rock 'n' roll, quitting the genre once again in 1977 before returning to the spotlight in 1985 with the release of his biography Quasar of Rock: The Life and Times of Little Richard.

An Inspiration to Legends

While the origins of rock 'n' roll is an often debated topic, Little Richard had proclaimed himself the "architect of rock 'n' roll" in a 1990 interview with Rolling Stone, and few have debated this claim.

Heard across the world, his songs formed the inspiration for countless musicians who would go on to become rock 'n' roll legends themselves.

In July 1957, a 15-year-old Paul McCartney in Liverpool, England auditioned for a local skiffle band The Quarrymen with a rendition of 'Long Tall Sally' - hitting the high-pitched notes effortlessly, and impressing the band's vocalist John Lennon, a fellow Little Richard fan. The duo will eventually go on to form The Beatles, one of the greatest bands that ever was.

From 'Tutti Frutti' to 'Long Tall Sally' to 'Good Golly, Miss Molly' to 'Lucille', Little Richard came screaming into my life when I was a teenager. I owe a lot of what I do to Little Richard and his style; and he knew it. He would say, 'I taught Paul everything he knows'. pic.twitter.com/96bOzphhs8

Far away in India in 1958, 12-year-old Farrokh Bulsara formed a school band named The Hectics, which covered rock 'n' roll music including Little Richard, paving the musical journey for the boy who would grow up to become Freddie Mercury, legendary frontman of Queen.

In 1959, 18-year-old Robert Zimmerman was told to write down his life ambition in his yearbook to commemorate his high school graduation. His goal: "To join Little Richard". Three years later, he released his first album under the name Bob Dylan.

I just heard the news about Little Richard and I’m so grieved. He was my shining star and guiding light back when I was only a little boy. His was the original spirit that moved me to do everything I would do.

These are just three anecdotes of rock legends who were inspired by this pioneer who carved out a new genre for so many to flourish. Other musicians who have cited Little Richard as their inspiration over the years include David Bowie, Jimmy Page, Rod Stewart, Elton John, Keith Richards, and Mick Jagger, who called Little Richard "the biggest inspiration of my early teens" in a tribute to him on social media.

Without a doubt - musically, vocally and visually - he was my biggest influence. Seeing him live in my teens was the most exciting event in my life at that point. Goosebumps, electricity and joy came from every pore. pic.twitter.com/Enno1mgfTO

One For The Spotlight

The first rock star there ever was, Little Richard pushed the boundaries of music in his time and brought his personality with him onto the stage. In a genre where many musicians were known for the people they were just as much as the music they created, Little Richard was the first to exemplify this trait.

In his 1990 interview with Rolling Stone, he shared that the only person to ever upstage him in his long career was Jimi Hendrix, the legendary guitarist with an ego to match Little Richard's, who joined his band in 1964.

"He was my guitar player, and you know, we didn't know he could play with his mouth. One night I heard this screamin' and hollerin' for him! I thought they were screamin' for me. But he was back there playin' the guitar with his mouth. He didn't do it again, 'cause we made sure the lights didn't come on that area no more. We fixed that! We made sure that was a black spot!"

When Rolling Stone published their list of the 100 greatest artists of all time, Little Richard was ranked at number 8. Among the 7 artists ahead of him, 6 were musicians directly influenced by him, alongside his contemporary Chuck Berry, a fellow pioneer of rock 'n' roll. While the entries on this list were written by other musicians inspired by those they were paying tribute to, Little Richard chose to write his own tribute:

I wish a lot of things had been different. I don’t think I ever got what I really deserved.

But it’s a joy just to still be here, to have stood the test of time. I think that when people want joy and fun and happiness, they want to hear the old-time rock & roll. And I’m just glad that I was a part of that. There’s only a few of us left: myself, Bo Diddley, Chuck, Fats, Jerry Lee, the Everly Brothers. It’s getting thin. So I think this is the last of it, the last of the good days. Soon there’ll be a totally new thing. But it won’t be the same. Never."