Two representatives from the channel approach for an interview, one of a handful lined up for the evening, and Nino Mendoza sounds like an excited grade-school boy who just found Santa Claus under a Christmas tree. The Blue Jean Junkies is launching their sophomore album in 12 Monkeys and while Mendoza himself invited friends and media people to the event, every person who shows up is greeted with unabashed enthusiasm… and unbridled honesty.

“Oh man, sobriety rocks, man!!! Now they’re coming to ME! Look at that, how about that!” 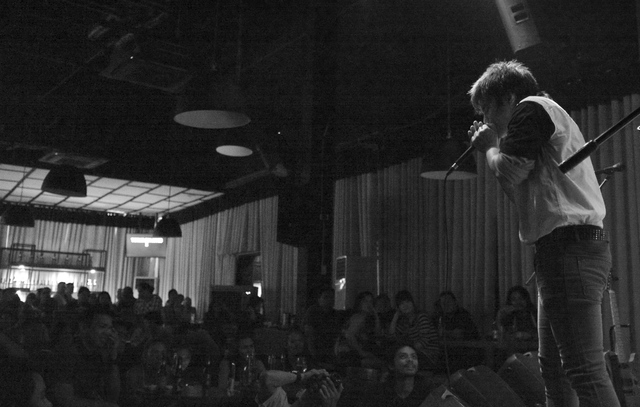 To say that Mendoza has led an interesting life would be accurate. In the 90s, the local music scene raved about this skinny handsome kid who played powerful blues harp. Near the end of the decade, he formed and fronted the the Blue Jean Junkies which further reinforced his reputation: as a frontman, he had the swagger and, yep, moves like Jagger (and David Bowie, both influences he proudly admit to). The band debuted its 70s-toned bluesy rock & roll on a December weekend in 1999 on NU107’s “The Crossroads with Cousin Hoagy”. In 2004, they released their first album for an indie label, helmed by Razorback’s Tirso Ripoll and Wolfgang’s Manuel Legarda, distributed by Sony Music.

“And then after that, I had my ups and downs and… too much of a good time (laughs) I got married on TV (to actress Snooky Serna)…”

He doesn’t elaborate and quickly reiterates,  “The main meat of the matter is we (Blue Jean Junkies) are here right now.”

Mendoza gets serious. “People have been asking me, ‘hey Nino, is it true (pauses) that you don’t even drink alcohol now?’ I say, ‘Yes, whatever it is, I’ve had my ups and downs in the past. If you wanna place it in a rock’n’roll light: my decades of decadence. I don’t know what’s going to happen tomorrow, or next month or next year, but I’d like to stay this way. I just get high through the power of music and as I value my life a day at a time, I would like to think that life will have a million opportunities. And simplicity makes things more accessible. I keep my optimism afloat, things will happen. Sometimes quickly, sometimes slowly. Progress is inevitable, as long as I maintain how I’d like to stay this way, today.”

He has put on some weight, not quite the svelte Jagger/Bowie acolyte of yore, but he does look and sound healthier. Not to mention, happier. “Yeah, I kind of have a belly now, man, so I can’t do those Jagger moves much anymore!” he says laughing.

The current line-up of the band, Nathan Manansala on guitar, Niko Dinglasan on drums, and Miggy Matute on bass, has been with together for a few years. Matute, who joined in 2006 just as Mendoza decided to pick up the guitar (“like Mick Ronson! Keith!”), seems to be the calm foil to the frontman’s ebullience. 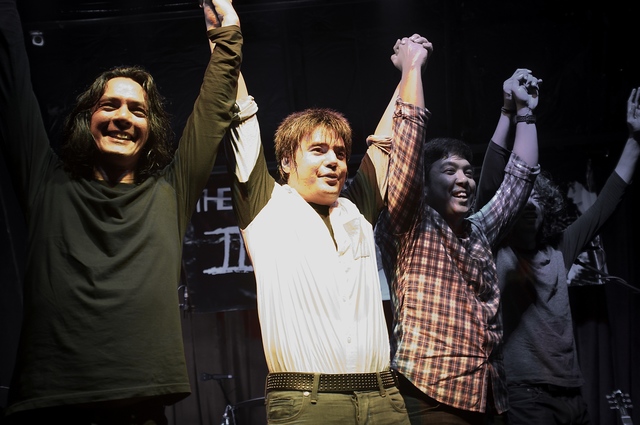 Nino says, “Through my ups and downs they were the ones who stuck by me, the up days, the down days, the dark days… we stuck by each other. And them sticking by me I believe is not in vain. I’m in recovery right now and our relationship has never been tighter, never been stronger, and I give them courage and hope and belief that who they’re following has hope and light because things are more clear right now, things are consistent. There’s more focus… it’s this (points to surroundings).”

It was hardly smooth sailing, of course.

Miggy: “ ‘Destination’ was written while I was on hiatus from the band, but I recorded it.”

Miggy: “You and I fought. (band laughs) I quit the band.”

Nino: “Oh!!! Yeah, I formed the band and I quit too!” (laughs boisterously)

Miggy elaborates on Mendoza’s new sense of focus, ”I think this album is actually proof of what he’s saying. Had it not been for what Nino did for the band in terms of recording and making sure the album is pressed and mastered, had it not been for his direction, I don’t think tonight would have happened or at least not yet. Maybe if it was up to the rest of us, it would have taken a longer time. Tonight is proof of what Nino is saying.”

The Blue Jean Junkies II was recorded in different studios: Wombworks, Kerplunk!, and The Yellow Room. Mastering was done in the latter and Miggy remembers, “Monty Macalino of The Yellow Room offered his studio, his engineers and his time, all in his house in Alabang. We wanted this album out by June or July."

The band's hunger to write new material showed in their studio output, as he explains. "There are other new songs that we want to record in the old Tracks facilities that we’ll save for the third album (note: The Yellow Room took over the legendary Tracks’ facilities). Monty is instrumental in this album, for his generosity, and we signed Yellow Room Music. He’s also a major part of why the album is out today.” In addition, the first track ‘Fine Company’ features Kakoy Legaspi on guitar and Bitoy Milan on drums. 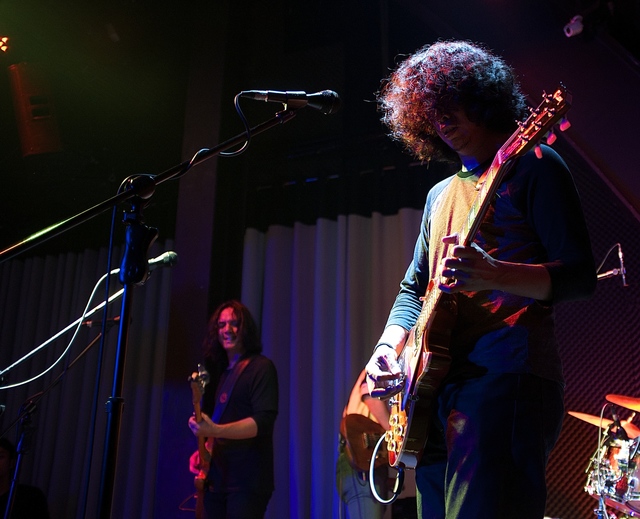 The songs were written from 2006 onwards, during, as Nino admits, his "decade of decadence".

"It was my lifestyle. Well.. the band’s lifestyle…(laughs). Not just me! Ego.” Miggy explains, “Nino is our head songwriter, so he’ll have a main riff, certain sections and lyrics laid out. Niko is left to do whatever he wants on the drums. I mean we don’t direct like ‘loud here, quiet here’ so there’s free rein there. The guitars, well we follow the basis… the lifestyle that Nino is talking about is attitude, it comes out in the way we interpret what he does. Songs evolve when you do them live; you hear the power of the volume, or you see the audience reaction.”

Nathan adds, “We don’t even ask each other, ‘What vibe are you going for?’ I listen to (Nino) and then I go do something that goes with that.”

Miggy offers another insight, “The songs were written in another mindset (pre-sober), but I think now we’re doing it a little bit differently, or maybe some titles or lyrics might mean something different now compared to before. We’re playing cleaner, there’s a lot less (unintended) guitar noise. But if you’re asking about songs that reflect Nino’s clear-mindedness, they’re probably going to be in the third album.” 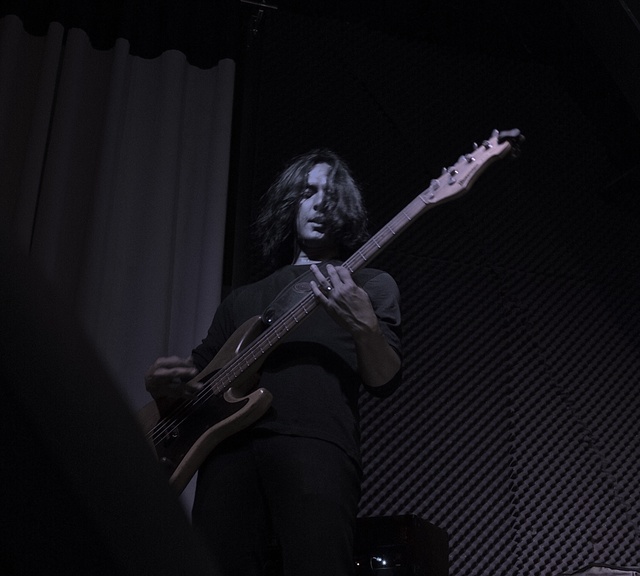 He is always self-aware and playfully cognisant of wearing his influences on his sleeve, but there are a few that are, given the band’s style, unexpected: Television, The Ramones, and Sonic Youth (particularly the album “Experimental Jet Set Trash and No Star”). There are no weird guitar tunings a la Thurston Moore/Lee Ranaldo; it’s all about the attitude and sense of dynamics more than specific appropriated licks and riffs. Miggy explains, “We’re fans of Garbage, we really like their music, so I would consider them an influence.”

For the Junkies, it’s all about vibe.

They have improvisational moments and sometimes rely on spontaneous cues live that they learned from the Stones, Zeppelin, or The Black Crowes. Improvisation, after all, is the lifeblood of most music that came from the blues, from jazz to rock. Are newer musicians missing something then? The band agrees it’s not a big deal: everybody approaches things their own way. 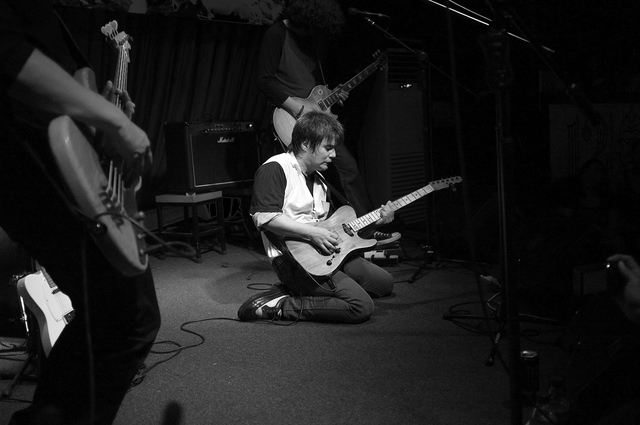 Nino: “The generation now, well of course, they grew up differently. They’re like, ‘Ahhhh ok, so this is Led Zep!’ and you know, that’s just the way life is.”

Niko: “I think there’s a lot of improvisation with new bands but exactly not like how it was. They improvise with the dynamics of the song, instead of just one guy soloing.”

Miggy: “Ours might be different because we might get lost in a song (while improvising) but if you hear a certain drum roll or a guitar riff, we know, ‘Ok, we’re coming back.’“

The interview is constantly interrupted — in a good way — by well-wishers; Nino says his hellos but is finally distracted enough to make the rounds. The band understands, of course, and encourages him as he rises from his seat with a mixture of reluctance and sense of responsibility while apologising generously, “Not to be rude!”

Later during their set sandwiched between DJ Badkiss, Mayonnaise, Pupil, Imago, and Wilderness, Nino profusely thanks everyone he remembers, his gratefulness and exuberance never grating, his pronouncements of sobriety never preachy. The rhythm section is swinging, the guitars crunchy, the solos tasteful, and brimming with the attitude that emanates from Mendoza, within the band to the audience and back. Their cover of “When the Levee Breaks” stomped like Godzilla. Slide guitar, blues harp, raunchy rhythms and solos — Mendoza handles each with authority and heart. The guy, and the band, just oozes rock & roll.

Yes, the Jagger/Bowie-isms have almost disappeared, due in part to his “healthier” physique but it is a welcome change: there have been times in his inebriated past when he acted unintentionally like a parodist. 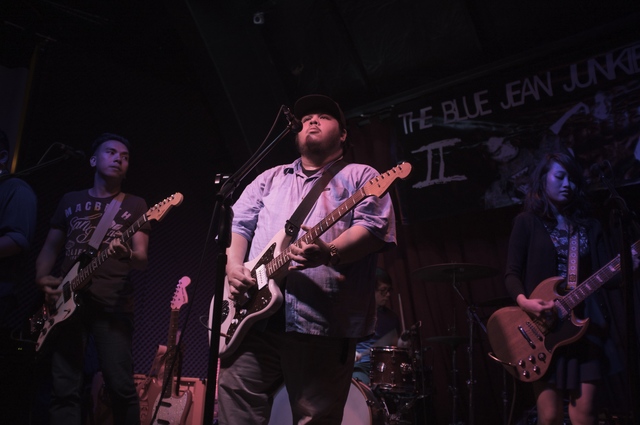 He is moved to the point of amazement that bands “more popular than us!” agreed to be support acts, and even remembered the sponsors. The Blue Jean Junkies even took a bow with huge smiles at the end of their set. Hardly anybody, particularly in rock & roll, does that anymore, and it is an earnest moment.

The night was a collective triumph, the album title signifying the next phase of the band — a renaissance if you will.

But all things considered, it is Nino’s most of all. Sobriety rocks. Literally.

The Blue Jean Junkies have a weekly residency in Alchemy Bistro Bar, and will play in Handlebar on July 17, and possibly Singapore on Sept 25 for Life Rocks. For updates, visit their Facebook page. The album Blue Jean Junkies II is available on Spotify, iTunes, and Deezer.