If you grew up in the '90s, chances are you definitely know who S Club are. The English pop group is responsible for hits such as 'Bring It All Back', 'Never Had A Dream Come True', 'S Club Party' and many more. They also had their own tv show, Miami 7. The group was originally known as S Club 7, given that it used to consist of seven members. The band split up in 2003 citing exhaustion from extensive touring and long filming schedules surrounding their tv show and movie deal.

But as we know, band splits hardly last forever, and all seven members reunited for a brief U.K. arena tour in May 2015. Since then, members Jo, Tina and Bradley have reunited under the moniker S Club 3 (SC3) and released a new track 'Family' last December.

We did a quick-hit email interview with Tina of SC3 on their reunion, the new music and the future ahead of their performance at the nostalgia extravaganza I Love 90s next week at the Star Theatre, which will also include 911 and 5IVE. Check it out below.

S Club, or S Club 3 as you’re known now, were reintroduced to the public recently with a brand-new single — how did the song come together, and how did it feel releasing it for fans?

'Family' was meant for S Club 7 when we reunited in 2015, but it was never released, so we recorded it as S Club 3 for our fans and teamed up with the Rainbow Trust Children’s charity to release it for Christmas.

How has the reception been so far?

Amazing, we are so blessed that we still get to tour the world doing what we love.

The full S Club were briefly reunited in 2014. Is there a reason why the other members have not joined this time?

We reunited from 2014 to 2015 and it was so amazing having everyone back together and there may be more in the future, who knows, but right now the three of us are enjoying touring together. We are so busy it’s crazy and the others are busy with their own projects, but you never know.

What about this iteration of S Club stands out, in your opinion?

The songs are very positive and feel good.

Working within this group dynamic now, would you say that each member has been able to contribute equally? Tell us more about your songwriting and rehearsal process.

We are all equal in S Club 3 sharing the vocals with some of the tracks. We like to update everything and we rehearse as and where we can.

How would you say the musical landscape has changed — from then, as S Club 7, to now?

If there’s a new album, what can we expect from it?

There are no plans for a new album as yet, we are just seeing how it goes first.

What are some touring lessons you’d like to impart to newer artists?

When I’m touring, I always try to be really healthy because it’s so easy to get run down from all the traveling and shows.

What can Singaporean fans expect from your upcoming show here?

They can expect lots of singing and dancing. One big S Club party!

S Club will be performing with 911 and 5IVE as part of the I Love 90s concert on 10 March at The Star Theatre, presented by Mode Entertainment. Tickets for the show are now on sale for S$98, $118 and $138. A VIP package is also available for $178. Tickets can be bought here. 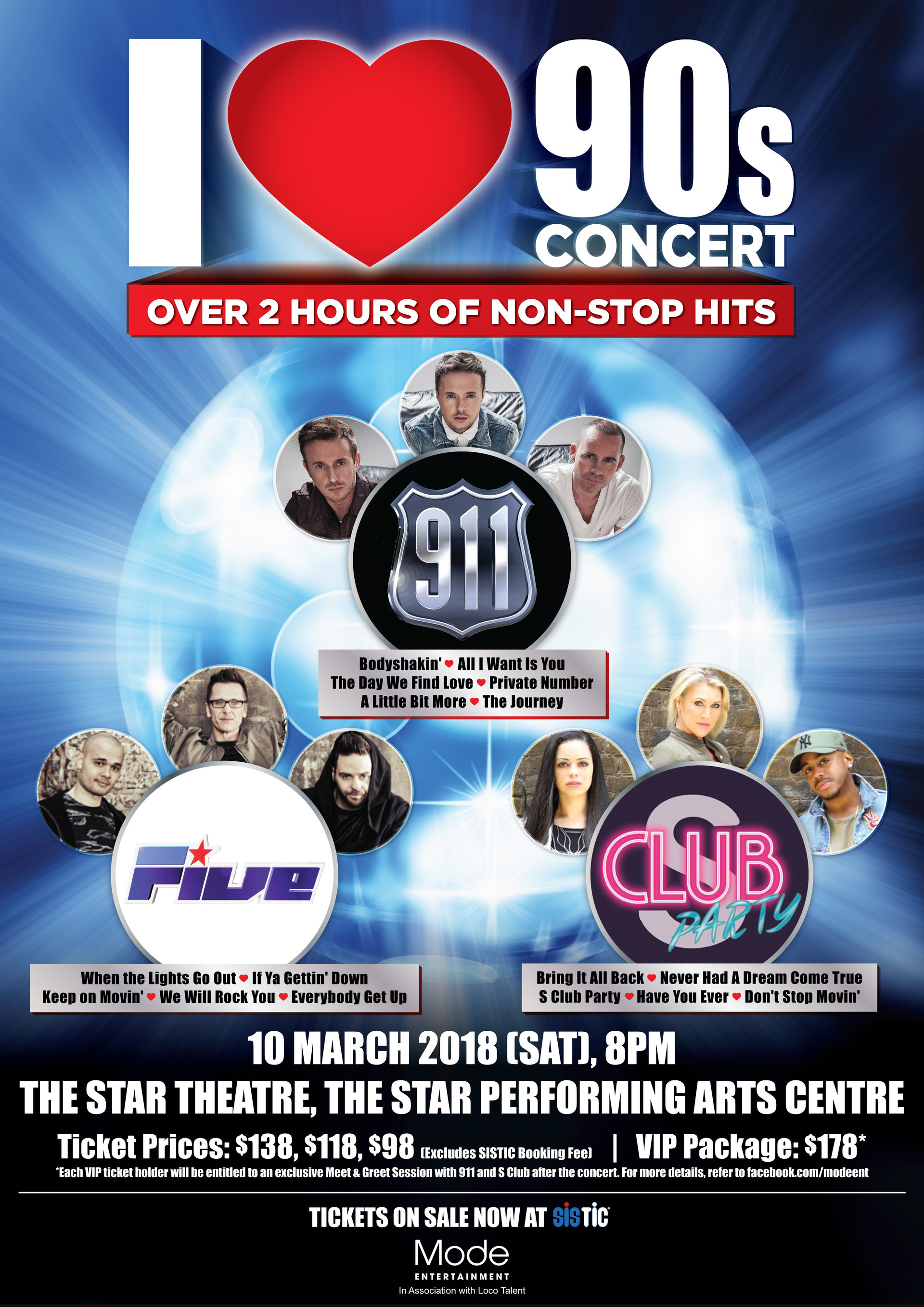