American country-pop sensation Sabrina Carpenter is coming to Singapore for the first time ever.

Concert promoter LAMC Productions took to Facebook on Friday, 25 January to announce the singer's debut performance in Singapore. The young starlet burst onto the scene in 2015 with the release of her debut album, Eyes Wide Open. Since then, Carpenter has gone on to amass a strong following, with her 2018 record Singular Act I receiving critical acclaim.

Sabrina Carpenter is set to perform in Singapore on 11 April at the Kallang Theatre. Tickets will cost S$148, S$128, S$108 and S$88. Tickets will be released via SISTIC, although a date for ticket sales has not been announced.

Check out the music video for Sabrina Carpenter's 'Sue Me' below. 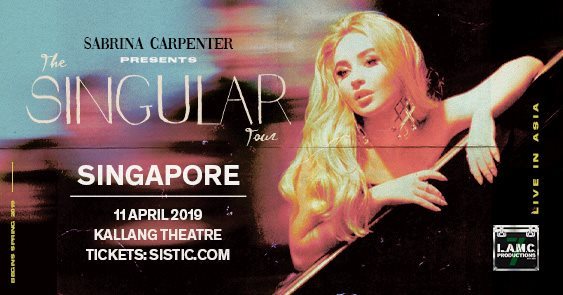