In celebration of Sandwich's 20th anniversary, Bandwagon sat down with the members of the band - Myrene Academia, Mong Alcaraz, Diego Castillo, Mike Dizon, and Raymund Marasigan, for an interview that will take them back to their beginnings, through their eight albums, and their very storied lives as musicians. Sandwich: This Band's A Party is a feature in 3 parts, beginning with Chapter 1: Return To Start.

Here is how this particular Tuesday night started out: the band wasn’t playing for the evening but they were all at saGuijo for their myriad of separate music ventures. Their road manager, Jamie was endlessly apologetic because the members had to, one by one, take turns in temporarily leaving the interview table so they can attend to their non-Sandwich posts: Raymund and Mike for Pedicab; Mong for Chicosci; Diego for The Diegos; and Myrene for Imago, who was first off her seat.

As she leaves, I notice a bottle of whisky on the table, half-emptied even before I got there. I, on the other hand, sat in front of that bottle quite unraveled by the sixteen-year-old Sandwich fan in me. I began the interview in the clunkiest of ways: by relaying to them something they already know. They recorded the first two demo tracks, 'Butterfly Carnival' and 'Sakyan,' with a 4-track recorder, I told them. And as I was steering the conversation toward transitioning from 2 demo tracks to being a signed artist in a matter of months, Mong Alcaraz their guitarist for the past five albums quipped, “which I love!”

He was referring to Sandwich’s glorious self-introduction to the music scene in the form of 'Butterfly Carnival." The song opens with an unmistakable guitar riff and phaser effect, hithering and begging you to give into it more. It’s a track that asks for another listen, and another, and another, and people did exactly that.

“Markadong markado sa amin yung first ever narinig namin na B-Fly,” talking about how hearing the first demo of the song on the radio left an imprint on him and Miggy, his bandmate of many years with Chicosci.

Mike recorded that demo in Rayms’ apartment and he recalls feeling a certain hesitation with his drumming because as he would describe the feeling, "medyo nakakasindak kasi drummer din siya. Baka isipin niya na baduy yung gagawin ko." ("It was terrifying because he's a drummer as well. He might think that what I did was corny.") It was a situation wherein he recognized that Rayms can call a spade a spade. At the same time Mike didn't want to make a ruckus and upset Rayms’ neighbor.

Just go for it, signaled Rayms; so Mike went in for that last minute addition and added the drum bit that Mong enthused about earlier. Mike sings it to me: 'Dududugdag pgsh.'

“Saka may drum machine: 'tugtugtug,” ("And there was a drum machine: tugtugtug") Rayms adds in, in reference to the relentless drum sample throughout the song.

“Yun yon!” (That’s it!), the excitement so audible in his voice. It was obvious to any onlooker that Mong was a fan of this band even before he became part of it. Mong continues on about the three incarnations of the song he’s heard over the years, including the one that made its way into the album; but the very first one he heard, he says, is his favorite. 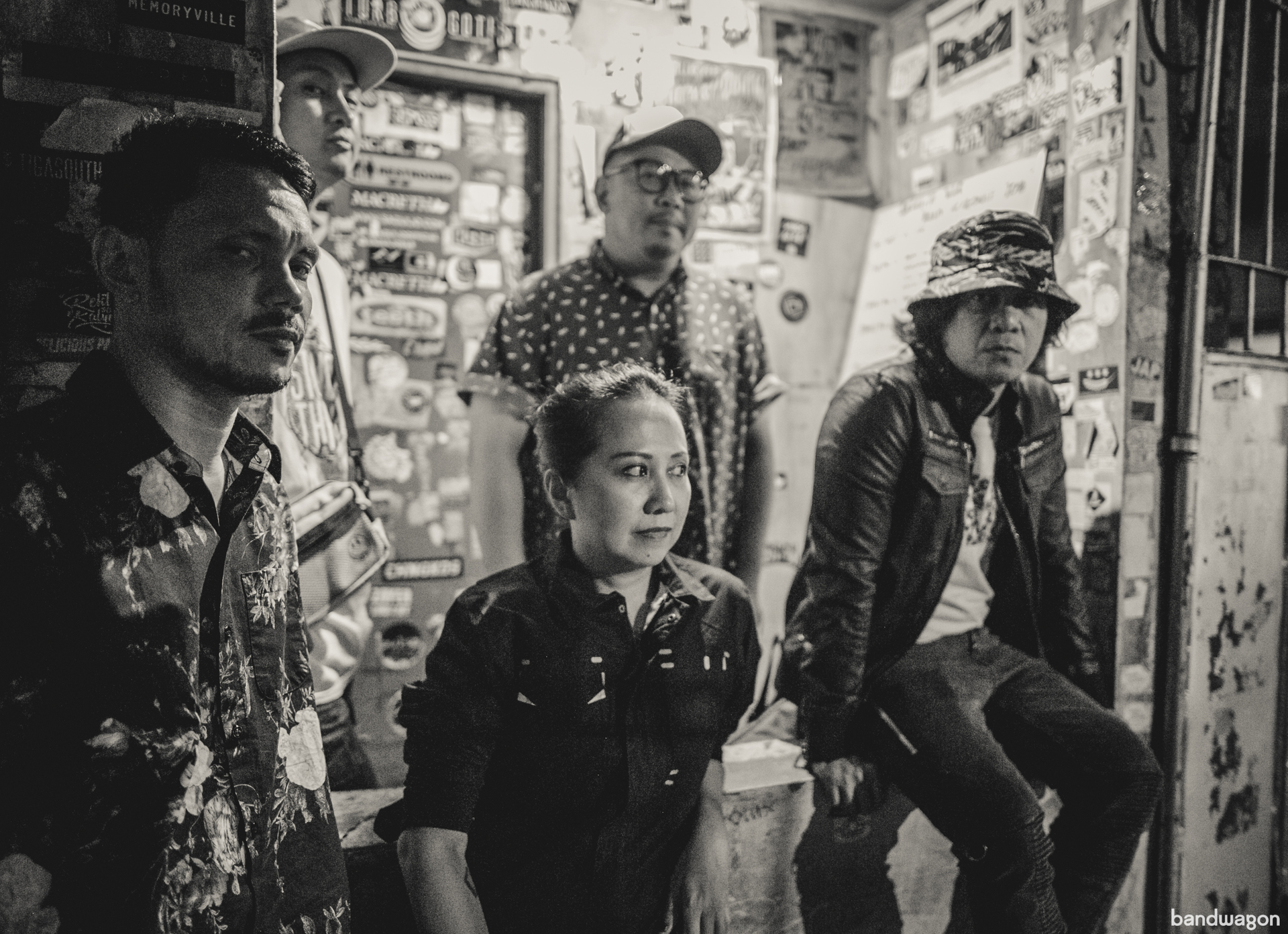 That original demo, set in a minidisc, is currently nowhere to be found. The copy was given to NU 107, because that was what their needed format was at that time; but it sadly remains untraceable after the radio station closed shop back in 2009 when it ended its 23-year run.

At this point, Mong had nothing to do with the band, at least not just yet. He was still in school but his was an insightful viewpoint of the climate of the underground music scene. “Miggy, Me, and Calde...the rest of Chicosci, uh Marc (Abaya)...Ciudad,” he trailed off as he talked about his time in Ateneo and how everyone’s ears were on the ground just waiting for the next movement that would shake the earth they were walking on.

“You have to understand (that) at that time, kumukulo yung eksena.”

“Kumukulo,” or boiling, a commanding term of so much accuracy to allude to what was about to happen: this was the end of the 90's and as we enter the early to mid 2000's, a renaissance of local bands was about to befall the music industry.

And much of this was owed to the aforementioned radio station whose program 'In The Raw' gave an open door to local acts who were working their way in. “Makinig kayo ngayong Sunday,” ("You have to listen this Sunday") was something that was regularly said during that time.

To drive a point, he would bring up "Boy Trobol." Mong, as his story goes, was hanging out at what was formerly Tracks Studio, now Yellow Room Ortigas. He, alongside Allen Cudal of Greyhoundz and Bong Luib of Cosmic Love, decided to swing by to check out Queso’s sessions for Pilipinas (2002) which was incidentally being recorded at the same time as 4-Track Mind, Sandwich’s eventual sophomore album. In these sessions, Eight Toleran would ask about "Boy Trobol" and the legendary rumble at one of Jing Garcia’s Sunday Grabe Sunday productions in Mayric's.

Diego would take over the retelling of how the set of an all-girl band Furies, who used to cover 'Cherry Bomb', ended being heckled and thrown beer bottles at. A riot ensued, of course.

“We were kids,” Rayms told me as if to rationalize their behaviour. “Late 20s, early 30s.”

All of this, it turns out, was the doing of “Boy Trobol.”

“So you guys don't know what his name was?,” I assumed.

They all laugh as if to tell, “don’t be silly, Isa.” They do, in fact, know his name and still know him personally up to this day even. But the moral of the story here is not in the digression itself but that the scene was small and so interwoven that a story, equal parts mundane and absurd as this, somehow reached him.

“A lot of word of mouth,” he meant both in story and in music. "That’s how Sandwich really started,” concluding his short history lesson.

If it at that time, Mong was still in Ateneo; Raymund and Mike were still with their bands, Eraserheads and Teeth respectively. Despite the lurking shadow of each having their own behemoth of a band, Sandwich was eventually formed to release their debut album Grip Stand Throw.

I turn to Rayms and ask him about anything that stands out to him during their formative years. He gives me a direct, “I don’t remember anything at all.” 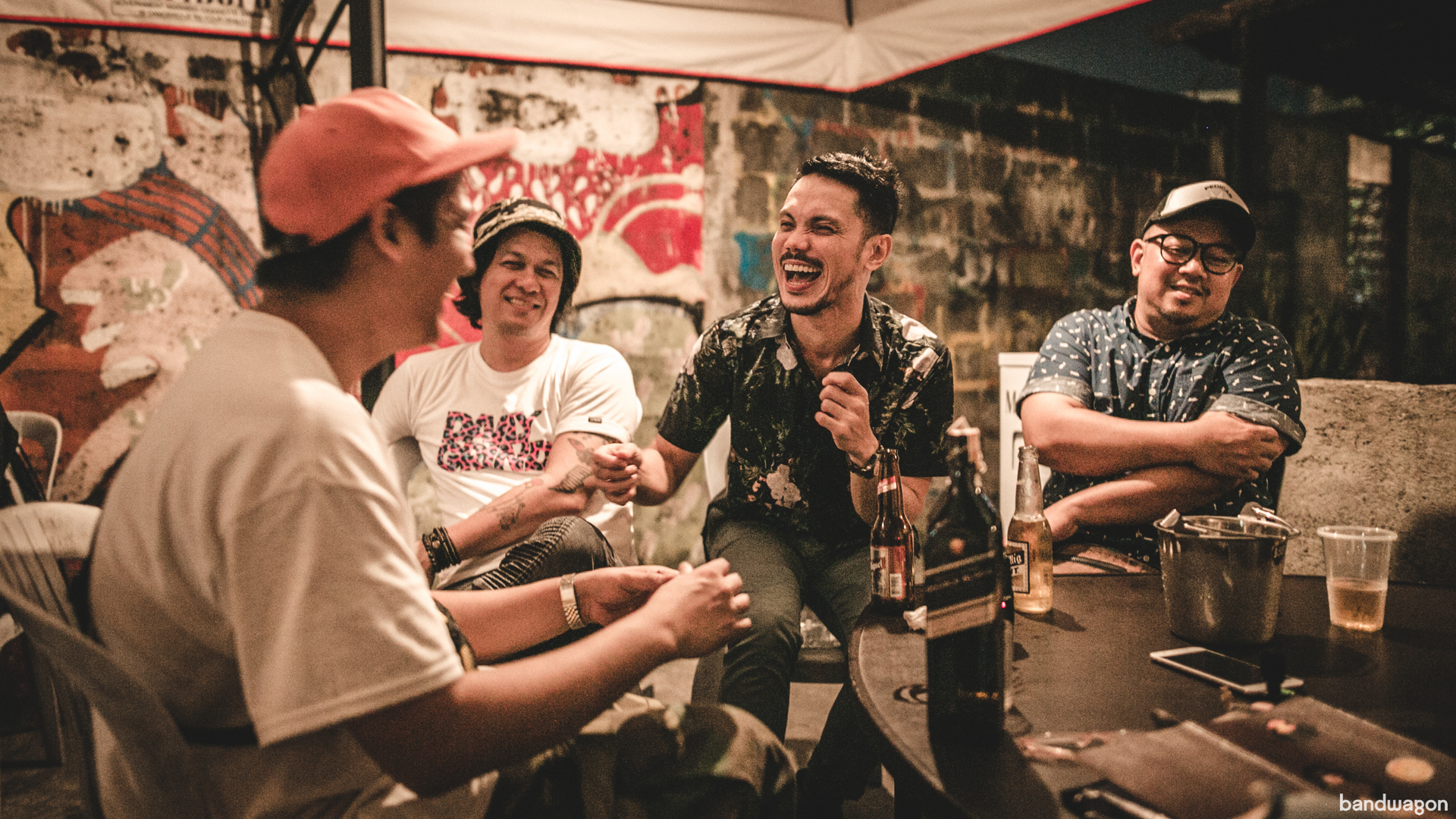 I grapple with his response a little bit but Mong, who seems to have dove deep in his memory bank, throws in something that none of his bandmates have heard before. “Weird like Sonic Youth, hip-hop like the Beastie Boys, and rock like the Foos (Foo Fighters),” that’s how Sandwich wanted to be. In 1997, through a poetic turn of events as Mong calls it, all these three bands were in Manila for a concert and all the members of the current Sandwich line-up were in attendance that night even before they all met one another.

“Ando'n ka?,” ("You were there?") Diego inquires with a pinch of surprise.

“Yeah! That was my first concert.”

There was a lot of weirdness, hip-hop, and rock n’ roll in the Grip Stand Throw but Diego’s personal favorite would be 'Cheese Factor Set to 9.' Giving accord the first track of their first album as the standard bearer of what the band first Sandwich first saw itself Diego explains,“It was the closest to the original concept or germ of what we—”

Roughly two decades later, the album has stood against the shifting judgment of time but behind the album are anecdotes of some then ingenue musicians. Diego, fresh off a band with Mike and Myrene called Aga Muhlach Experience had next to none experience in the studio. He recalls an embarrassing footage he had found a decade after the release of the debut album. Picture this: Raymund clapping to Diego so that he could play in time, because Diego was playing the guitar too fast. “Sobrang sugod,” ("Super excited") he practically laughed off the statement. “Pero yung mukha ko parang normal lang.” ("But my face looked normal.")

He shares this anecdote unapologetically. As is with most bands and most musicians, you have to start somewhere and sometimes, somewhere doesn't always look good.

Grip Stand Throw would eventually win the band three awards in the NU 107 Rock Awards: Album of the Year, Best New Artist, and Song of the Year for 'Butterfly Carnival'. This was in 1999 and we haven’t even entered the new millennium yet.

Somewhere in this part of the interview, Rayms would finally answer my question to him earlier. “We all met for the first time, as a band in Mike's house. I met Marc Abaya in a party. We jammed. We wrote a few songs.” He continues laconically, “we figured we had something special. We made demos, gave it to NU, got the interest of the recording company, and then we eventually recorded an album; which was fun.”

Read the next chapter: Sandwich: This Band's A Party, Part II 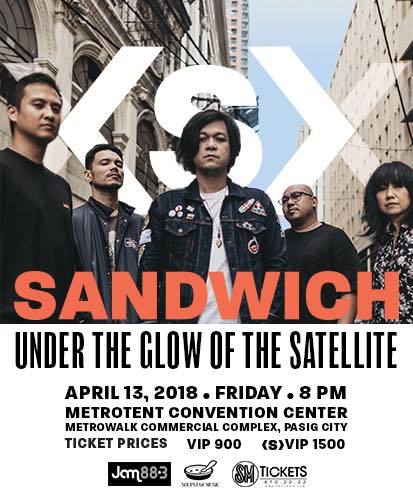