With deliriously lavish preparations, which include sourcing out budding musicians all over Singapore to sing or rap in a choir (we're still waiting eagerly to see how that plays out), along with arranging 50 costly pianos for a specially commissioned piece, the upcoming Sing50 concert has revealed a group of 70 musicians who will perform at the National Stadium — part of the nation's celebration of 50 independent years.

The list is quite impressive as it spans decades of Singaporean music — going back as far as popular frontmen of 60s rock groups The Quests and Sweet Charity. Vernon Cornelius, frontman of the former while Ramly Sarip served decades as the latter's enigmatic lead singer until his departure from the influential group in 1986. Both have seen considerable success as solo artists and will be featured on Sing50. 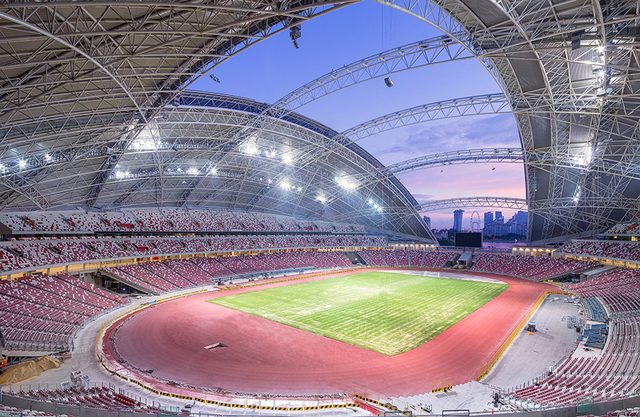 The interior of the current National Stadium. The Pinholes will be one of the many artists performing in the venue, the same one that held One Direction recently. Sing50's so lucky.

What we're most happy about are the additions of X'ho, who was one of the key individuals who paved the way for underground Singapore rock music, legendary indie-rock band The Oddfellows, affable pop-rock group The Pinholes along with self-professed "discovered in Spain" pop singer Wiltay.

It's definitely heartening to see the people behind Sing50 recognize some of the independent talents that have affected many Singaporeans over the decades. But why Wiltay? We don't even want to explain. You just need to watch this music video and all skepticism will be eradicated, we promise.

But perhaps what's a slightly confusing move are the appearances of overseas talents: namely celebrated Chinese pianist Lang Lang and Black Eyed Peas rapper apl.de.ap. Lang Lang we can understand, considering his name is all over the Steinway pianos acquired specially for the concert, but apl.de.ap?

Not sure what he's going to do but it's safe to not count on him bringing out will.i.am and the rest of The Black Eyed Peas. Maybe a generational rap collaboration with Sheikh Haikel and ShiGGa Shay? Whatever it is, it better include Wiltay — who, let's face it, is the real national treasure here.

You can find the full list of acts here, which appears to be updated with the recent additions of The Oddfellows and a few other names, but we're hoping to see Cashew Chemists jam with Vernon Cornelius or .gif do something with Wiltay. A lot of things are still up in the air at this point but you can get your tickets at just SG$20 if you're morbidly curious.