Despite the burgeoning rise of high-profile modern music festivals such as Laneway, Hostess Weekender and Camp Symmetry, not all promoters have forgotten the fans of music on the hard-hitting side of the music spectrum. LAMC Productions organized the first ever Singapore Rock Festival over the span of two nights. Even though ‘rock’ itself has become an ever-reaching broad form of music, it was well-represented with each band exemplifying distinct forms of various rock styles. With our ears still ringing, necks still hurting, here’s our lowdown of what happened during those two nights. 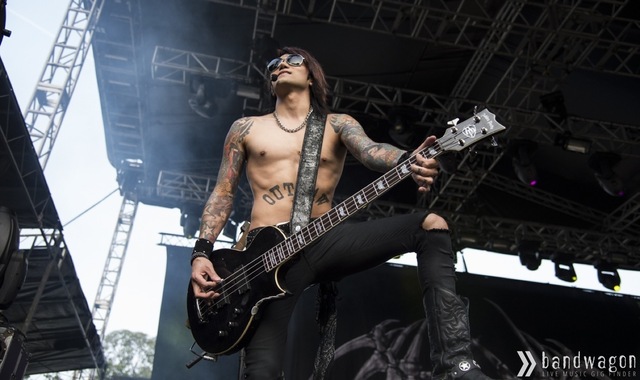 First up were Black Veil Brides. A band steeped in post-MySpace and Hot Topic goth culture, they utilize the modern heaviness of contemporary metalcore (while abandoning it later in their career) with a strong sense of glam rock appeal which, unlike what most people think, didn’t die with Poison and Motley Crue.

The make-up’s gone, too?!: Yep, except for the eyeliner and gaudily rock-star wardrobe, their faces were devoid of being caked. Instead, their exposed Caucasian skin was left to turn pinkish under our dry, hot sun

Winning misfits over: From the pre-pubescent girls who fawn over lead singer Andy Biersack or the self-branded teenage outcasts who revel in dressing up with thick layers of makeup and wildly colored hairstyles, Black Veil Brides did not have a shortage of die-hard supporters that day for sure.

Audience solidarity...sort of: Love them or hate them, you can’t deny Black Veil Brides’ ability to unite an audience into raising horns and headbanging in unison...or can you? The crowd was obviously mixed, with the ardent fans united front and center while the ones at the back glaring with elitist judging eyes. Overheard one dude “We’re waiting for the real rock music to start!” (Five Finger Death Punch is “real” rock music, apparently). 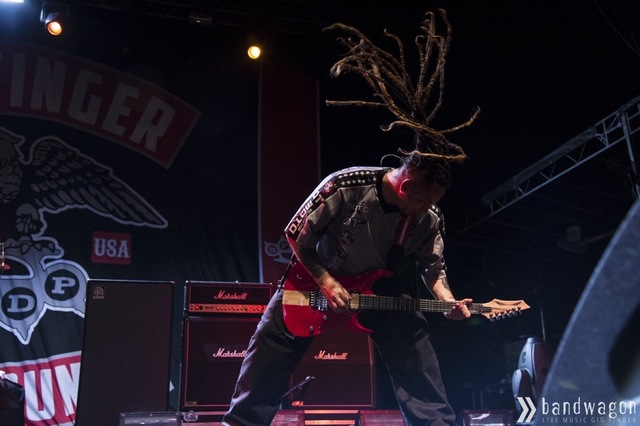 Next on the bill were Five Finger Death Punch. A vague description of their music could be if Pantera never broke up, began mellowing down a tiny bit, listened heavily to Staind, Nickelback, Fox News and got signed to Roadrunner Records.

The way of the fist: The band who won the honor of having the most bad-ass band name of the night. Sadly the bad-assery ended there (along with their haircuts).

Post-grunge post-angst: Offering nothing new as a rock band but replaced musical creativity with engaging showmanship and displaying a disposition on the furthest side away from douchebaggery usually associated with their brand of hard rock music (aka they just seemed like genuinely nice people who had a lot fun performing).

Bathory Bathory Quite Contrary, How Do Your Dreads Grow?: Guitarist Zoltan Bathory had the meanest set of dreads that rivaled even headliners Korn. 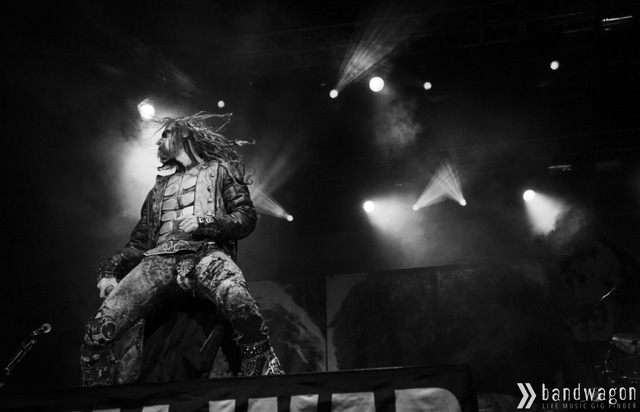 The first headliner of the night, Rob Zombie, who spearheaded a crop of industrial rockers (which included Marilyn Manson and Powerman 5000) that revitalized theatrical shock rock for a new audience in the 90s, after Alice Cooper’s obscurity from center stage.

THE HORROR, OH THE HORROR!: Best stage design of the night for sure, adorned with huge backdrops of classic movie monsters. For the uninitiated, Rob Zombie is also a successful film director who is also a professed lover of horror movies (as if his demon-possessed voodoo doctor image isn’t enough evidence).

Slammin’ in the back of his Dragula: Backing up his reputation as one of the top showmen in rock today, his live show deserved an A+ from his alluring, vulgar stage presence.

Shreddin’ in the back of his Dragula: Rob Zombie may only be a singer but he sure knows how to pick a stellar band, especially with famed guitarist John 5 in his stride.

Rob Zombie’s leisurely stroll: While John 5 unleashed a mean guitar solo, most eyes were transfixed on Mr. Zombie as he hunched and walked around the venue. Why? I’m...not so sure. I did get to touch him though. His hair’s soggy. 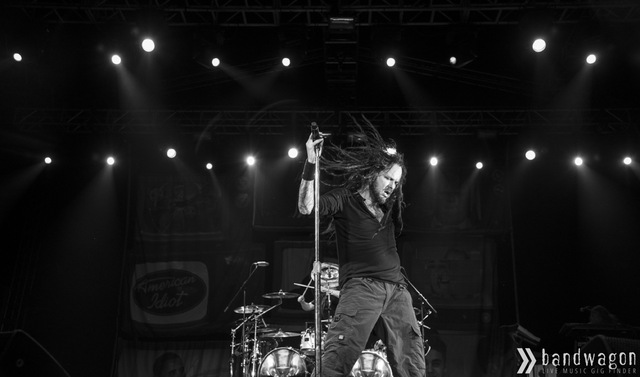 And then the final headliner for Day 1: the one and only Korn. One of the main bands responsible for innovating a new breed of metal back in the early 90s known as nu-metal, Korn have gone down in the history books (whether if it’s a good or bad thing is debatable).

Life is peachy: Frontman Jonathan Davies was reportedly down with a fever but still soldiered on throughout the hour-long set, although without the spastic headbanging he’s known for.

Y’all Want a Single: Although a pretty short set lasting barely over an hour, the band orchestrated a set-list filled with fan favourites and new ones that still went well with the zealous crowd. Heck, even their dubstep joints sounded great.

Slappin’ da bass: A unique characteristic of Korn’s distinct sound is bassist Reginald “Fieldy” Arvizu’s trademark slapping playing style comparable to Les Claypool of Primus. Despite the sub-par sound mixing on both nights (more on that later), that bass could still be heard as clear as day.

Freaks on a leash: Clearly Korn’s absence from Singapore since their inception was a big thing for many fans here. The moshpit was WILD, reaching its climax during the last song “Blind”. Hot damn, that was fun. 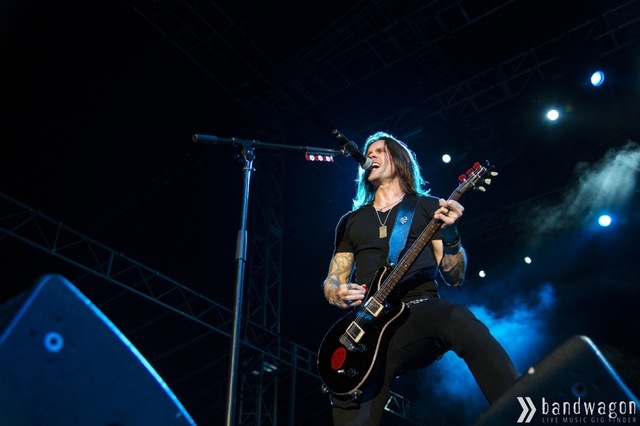 Although featuring two less acts than Day 1, both are juggernauts in rock today: Alter Bridge and Alice in Chains, both success stories on their own. Alter Bridge was formed from the remains of post-grunge band Creed (remember them?) after their break-up. Take out frontman Scott Stapp, replace him with Myles Kennedy, a few albums later and Alter Bridge earns more critical success in a single album than Creed did in their entire existence.

Mr. Kennedy: If anyone was keeping count, this was officially frontman Myles Kennedy’s third time performing here but only the first time with Alter Bridge. The first two times, we had the privilege of seeing him front former Guns N Roses guitarist Slash’s solo band. Saw him the second time with Slash and his vocals were just as powerful as they were with Alter Bridge that night.

Ties That Bind: Alter Bridge clearly has a strong and dedicated fan base here, with a huge portion of the audience headbanging and passionately singing to every song, cigarette lighters waving and all.

Brand New Start: Since the beginning of his post-Creed days, guitarist Mark Tremonti has been able to flex his guitar skills immensely, putting him as one of the top guitarists in hard rock today. His skills that night were up for show, with him shredding one solo after another with complete ease. 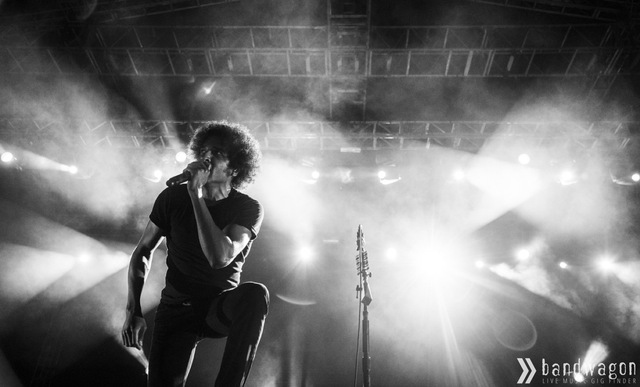 And of course, the final headliner for Singapore Rock Fest: the inimitable Alice in Chains. While Alter Bridge had the ease of changing a lead singer under a new band name, the story behind the new Alice in Chains lies a deeper, sadder reality. Best known in the 90s during the peak of grunge music, they were led by troubled frontman Layne Staley who sadly passed away in 2002. Leaving behind a legacy that previously thought could not be unmatched, the band was resurrected a few years later with a new face (vocalist William DuVall), a  rejuvenated modern sound and, totally uncharacteristic of their younger selves, more optimistic than ever with successful world tours and two critically-acclaimed albums in tow.

Black Gives Way to Blue: With very big shoes to fill, William DuVall has shown he’s more than capable of carrying on the AiC legacy and then some. With ample stage charisma and them nasty pipes to boot, he gels along well with the other, more veteran members. His dual harmonies with guitarist/founding member Jerry Cantrell are something to behold live.

One foot in the past, the other in the present: Despite constantly proving that they’re not a cash-grab reunion stint, the setlist that night embraced both their old classics and new brooding compositions.

“...so you couldn’t dam that RIVAAAAR!”: Although I later learned it was something they do a lot, starting off their set with the first two tracks from their classic album Dirt made me lose my shit.

Rain When I Die: A+ for cooling weather. No rain, no hot sun.

Would I see them live again: Hell yes. 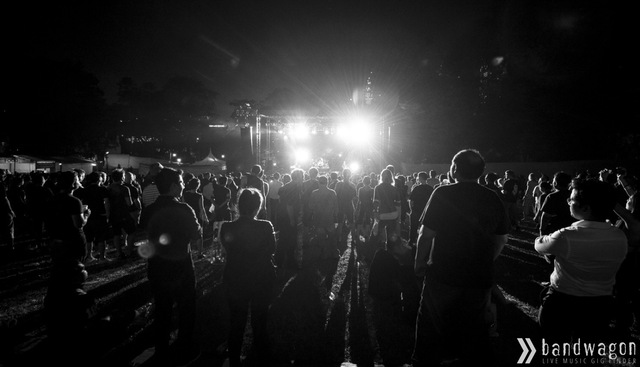