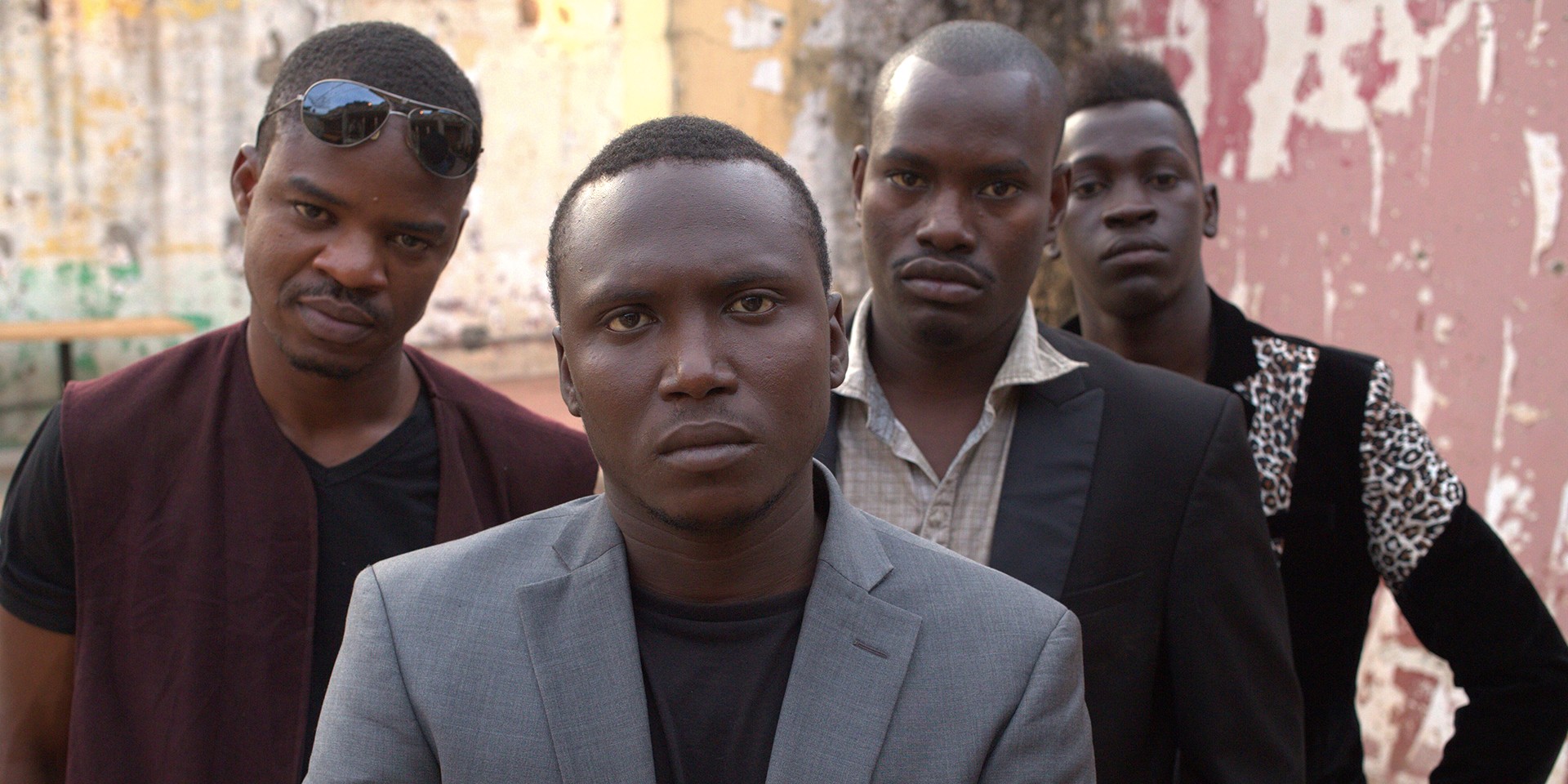 Rock music has elevated into the upper echelons of modern culture that we take for granted. What we forget is that it's still something foreign, and sadly, forbidden, in parts of the world.

For Mali, a country once pegged for greener pastures — fueled by a rapid economic growth and democratic stability after the 90s — peace was disheveled once the country was under the threat of an invasion by radical Islamic fighters, followed by an uneasy military coup. Comprising of various ethnic groups, many Malians situated in the North were forced to flee and seek refuge in other parts of Mali, or even further out in West Africa — either in hopes to wait it out until chaos was extinguished, or a resigned move away from a faded dream.

These people left their homes in Mali, but for most of them, they could never forget it.

Among them were three passionate university students, who grew up on a hearty diet of Jimi Hendrix, hip-hop, The Beatles and Bob Marley. They treasured the music of the West but above all, they remained forever enamored with Mali culture — or more specifically, their ethnic group of the Songhais. They worship the music of Ali Farka Toure, a native who propagated traditional Malian music by intertwining it with the blues, and they nurture a deep appreciation of Songhoy songs and dances, stuff they learned when growing up.

Moving further down south into the Mali capital of Bamako, they roped in a young drummer along the way and branded themselves as Songhoy Blues — a forthright homage to their roots amidst chaos.

Rock music became outlawed in their part of Mali, so decreed the militant Islamist group Ansar Dine: "We do not want Satan's music. In its place will be Quranic verses. Sharia demands this. What God commands must be done." So these Jimi Hendrix-loving Malians found themselves exiled from home, instead seeking refuge in both Bamako and their music. “We met up (in Bamako),” remembers guitarist Garba Toure, “and told ourselves we couldn’t just stay shipwrecked by a crisis like this. We had to form a band.”

Toure is the son of Oumar Toure, once a percussionist for Ali Farka Toure. For him and his band, music is sanctuary — an outlet for their despondency against their circumstances, and a platform to promote their culture. Their name was not the first choice, but it still carries the same meaning they intended, from the moment they began conceptualising this new project. "We wanted to use the word Desert but Desert Blues was already taken," says the band, "so we thought that because we are Songaï we should use the word Songhoy, and that's how we became Songhoy Blues. It’s important for us to represent our ethnicity." 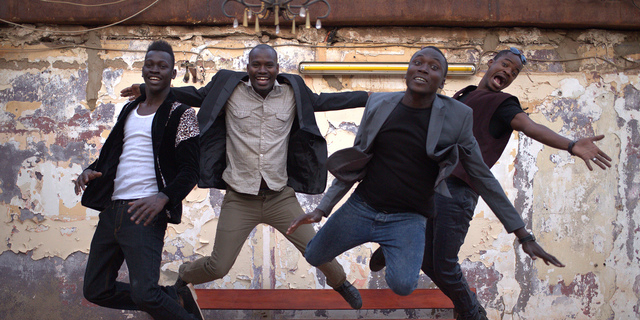 They soon became a live music fixture in Bamako, hard at work refining their sound — a stirring collision of electric blues-rock with danceable rhythms inspired by traditional Malian music. Underlying the instrumentation are lyrics calling for a peaceful Mali, projecting a hopeful future with ethnic groups reconciled and oppression vanquished.

It was the chance arrival of French music manager Marc-Antoine Moreau, who was working on a project titled Africa Express with alt-rock icon Damon Albarn, that the band was able to clinch their first big break.

Once Garba got wind of his presence in their area, he promptly reached out to Marc-Antoine. He set an audition for the band where they were subsequently invited to record with Nick Zinner, guitarist of the Yeah Yeah Yeahs. "The process was really simple, cool and spontaneous," says the band. "We had never heard of the Yeah Yeah Yeahs before the meeting but Nick is a very nice person who listens and is not someone who does too much." 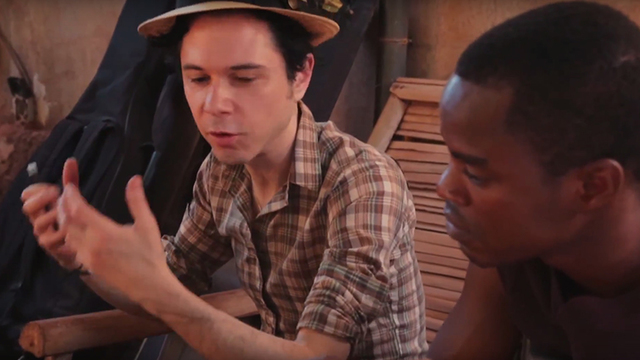 The band meeting Nick Zinner for the first time, as depicted in documentary They Will Have To Kill Us First.

The session resulted in 'Soubour', the second track of Africa Express' first album Maison des Jeunes, which involved other prominent musicians like Brian Eno and members of indie pop bands Metronomy and Django Django. Songhoy Blues were invited to perform in London at the album's launch concert in 2013 and were brought back for additional shows the following year, including a spot at premier world music festival WOMAD Festival.

After getting signed by UK indie label Transgressive Records and earning a support slot on Damon Albarn's recent world tour, Songhoy Blues are now a fresh face in the burgeoning crop of newer blues-rock acts, dominated by Alabama Shakes and Gary Clark Jr. — both who the band consider as personal favourites. Fellow Malian rock band Tinariwen have found similar success outside of their country, having been together since 1979 and faced duress throughout their existence, with a member even captured (and subsequently released) by Ansar Dine. "We like them. They were a good reference for us," says the band.

The cultural situation in Mali was also highlighted in the documentary They Will Have To Kill Us First, where Songhoy Blues plays a prominent role in highlighting the country's recent output of original modern music. The film was selected as part of 2015's Singapore International Film Festival, where the band are slated to make an appearance, alongside a set at Neon Lights Festival.

With their native Mali still under political upheaval and uncertainty, Songhoy Blues continue to tell their story around the world through impassioned rock music that's every bit as rebellious as it is infectious. And to the four-piece, rock is far away from dead, and it serves a higher purpose for them. "The powerful thing about music is the way that it touches people," explains the band, "and it’s a very, very good tool to send messages."

Ali is our spiritual father.

This album is universal.

This album is full of good melodies and it brings us back to the dune in the desert.

He is the best guitarist ever.

Songhoy Blues will be performing in Singapore as part of Neon Lights Festival on November 28. The band will also make an appearance at Clockenflap Music & Arts Festival in Hong Kong on November 29. They Will Have To Kill Us First is being screened at November 28 at 9.30pm at The Projector.