It began with a Thai band named Dezember. Despite being a metal band, their style of music differed from the speed-loving headliners. Their brand of technical death metal did resonate with some fans, although I found the vocals a little bit grating and at times hilarious. Despite that, they were pretty tight. They reminded me of bands like Obscura and The Faceless; brutal in its unrelenting riffs, but at the same time unconventional in its delivery. And technical, oh so technical. They got a few heads banging – always a good sign.

As backstage helpers unveiled the stage set-up, branded with a huge Megadeth logo, fans kept busy by singing along to metal tunes played over the speaker system. (Fun fact: they played 'Run to the Hills' by Iron Maiden, causing a big fan response during the chorus. The exact SAME thing happened before the Megadeth gig back in 2007. Major déjà-vu, but then again it’s a great track to sing-along to). The lights dimmed, we roared. “AHHHH,” went uh, everyone. 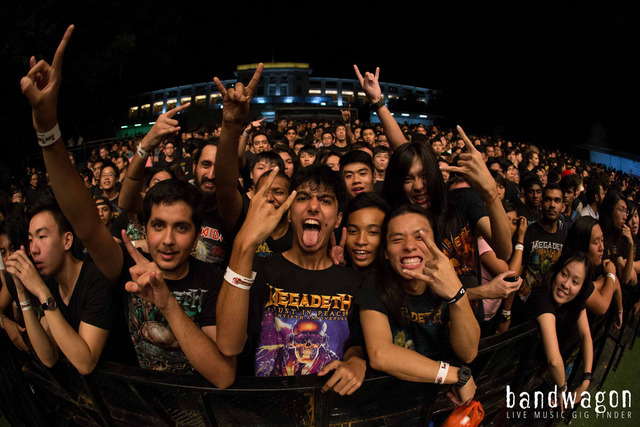 Sure enough, Dave Mustaine emerged from backstage with his trademark smirk, looking upon the legion of fans, glad to see him again. I for one was cheering, with horns up, as the 14-year-old fanboy inside me was jumping. Something important to note: the line-up changed after they came for their first gig. Fan favourite bassist Dave Ellefson, co-founder of the band, returned back to the fold in 2010. Seeing him in the flesh gave me goosebumps. Guitarist Chris Broderick is the other replacement. That dude has major SKILLS. But that’s not a surprise to fans, who know him from his stint with prog-metal band Nevermore. It’s incredible to watch him shred live, even if you’re not into that sort of thing.

I remember during their 2007 gig, Mustaine spoke in-between songs but that was it. He seemed rigid on stage, but back then I didn’t care. I just got down headbanging to my favourite ‘Deth tunes. This time, however, he was outspoken and interactive. And we ate everything up. Sure, age has made him wiser and cleaner, but beneath all the wrinkles he still had that attitude. That same attitude that gave birth to politically-charged anthems such as ‘Peace Sells’ and ‘Holy Wars…the Punishment Due’. He openly expressed his opinion on US President Obama and the ongoing gun control debate (he does not like both at all). His guitar skills are stuff of legends. He still has it, that’s all I can say. 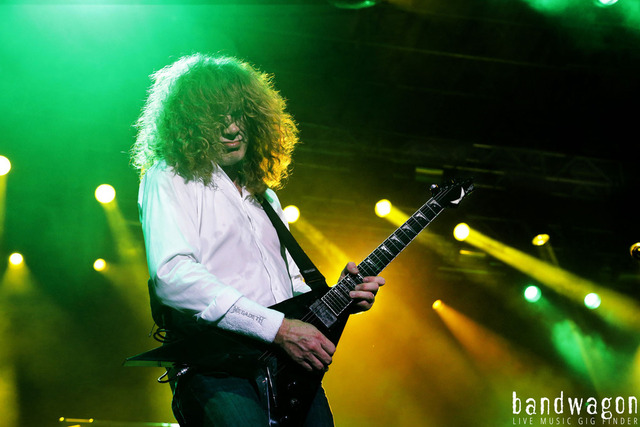 Megadeth ripped into their classic discography while generously picking from their new releases. There’s always that taboo when a band plays new material. “Give me the classics!” shout the fans, well usually. Not for Droogies (the name given to Megadeth fans). It was a party with every song.

One definite highlight for me was during the classic Megadeth anthem ‘Peace Sells’, THE VIC RATTLEHEAD came out to massive roars. For the uninitiated, Vic Rattlehead is Megadeth’s long-running mascot. Dressed in a business suit, an obvious stark contrast to his ghastly face (while also symbolizing the political commentary Megadeth has branded themselves with all these years), he egged on fans during the climax of 'Peace Sells' before slowly descending back into the darkness, from whence he came.

I think everyone who was there would feel the same way when I say the setlist was pretty short. In fact, if my calculations are correct, their entire set was only 70 mins (which is not a lot for a regular gig). Still, I had an awesome time seeing Dave & Co. yet again. From the get-go, he instantly proved why he has always been an important figure in metal. For now I say: please come back again!

Special thanks to LinVan Productions for bringing them back, and for hiring the most pleasant and nicest on-site crew I’ve ever come across at a gig.